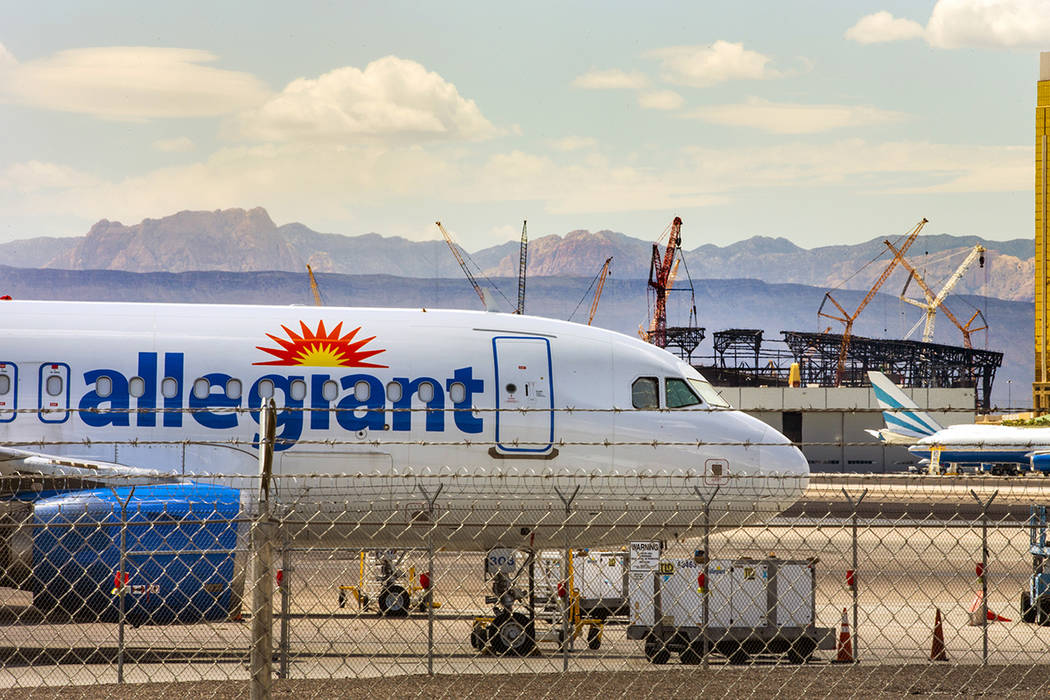 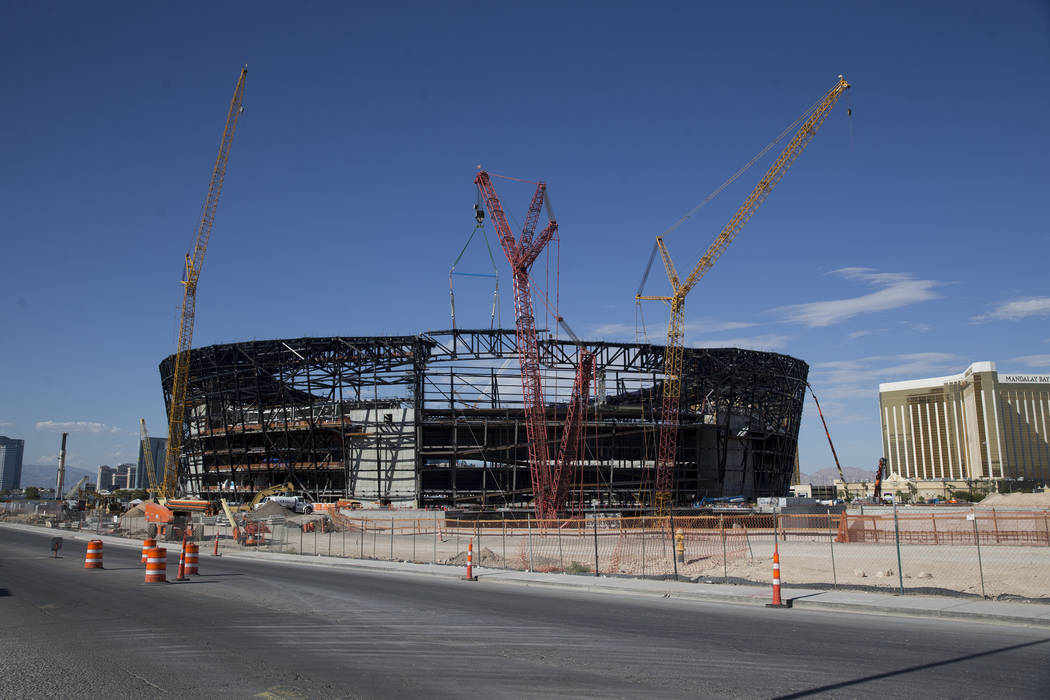 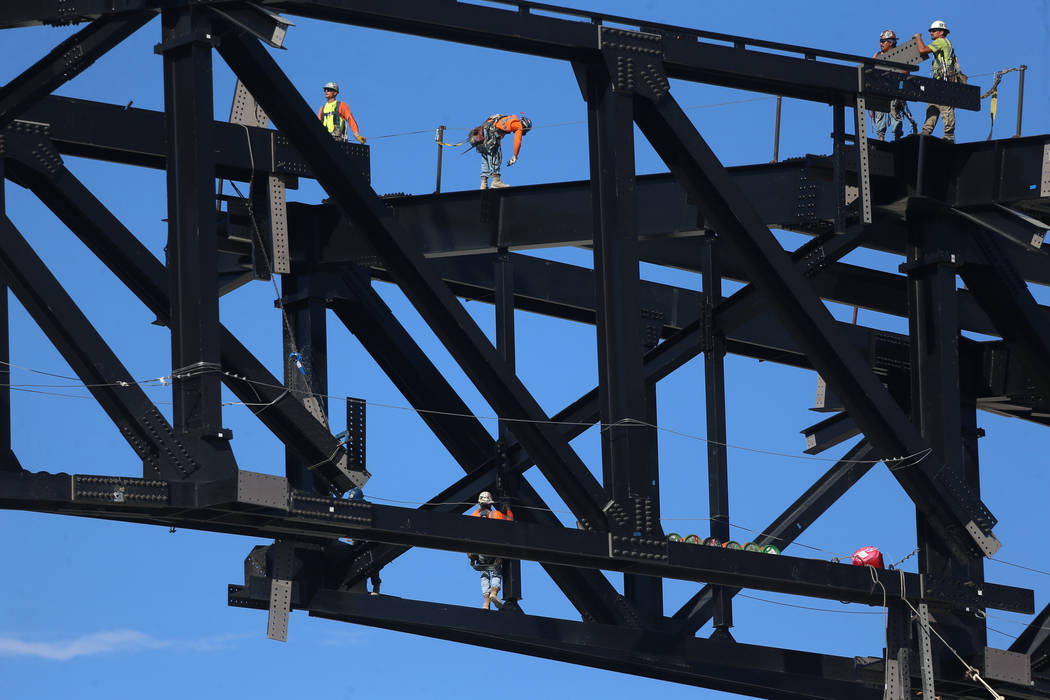 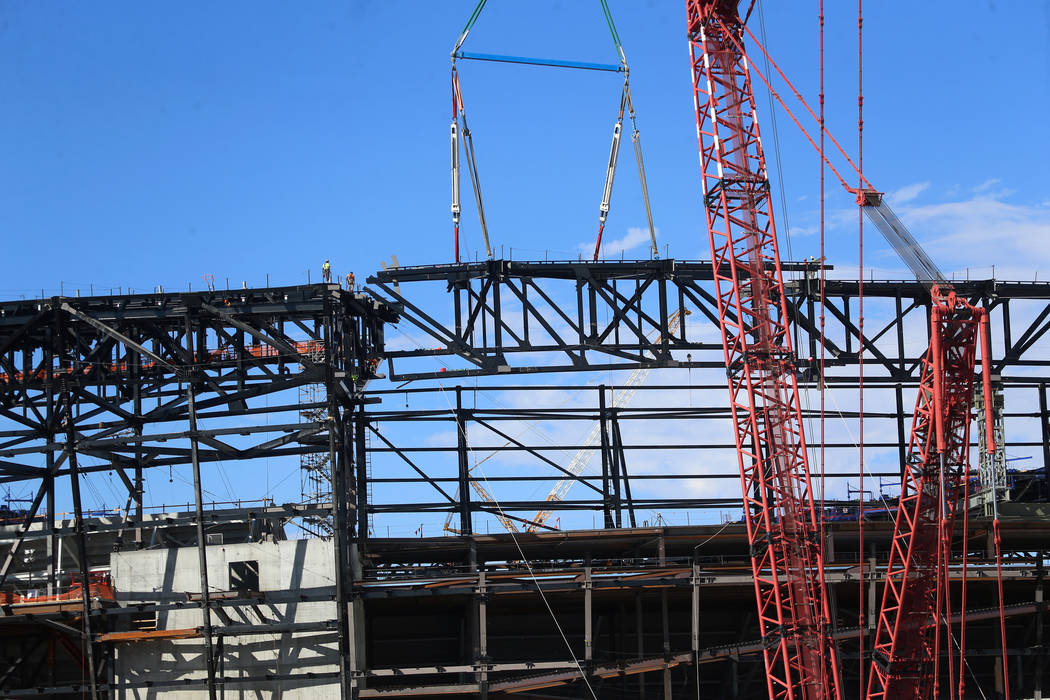 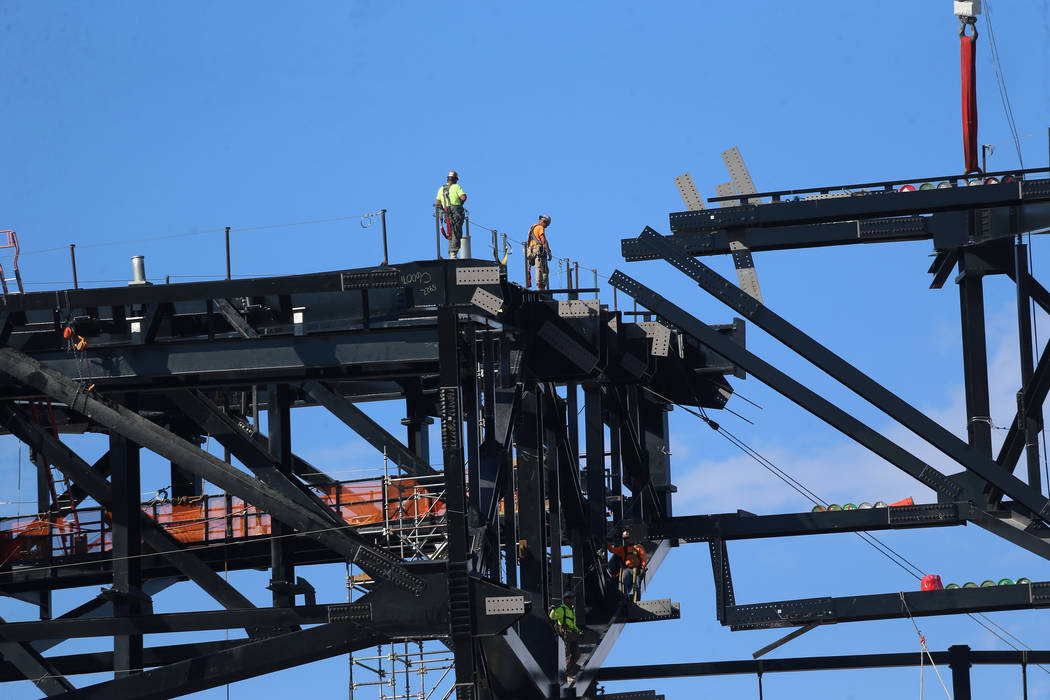 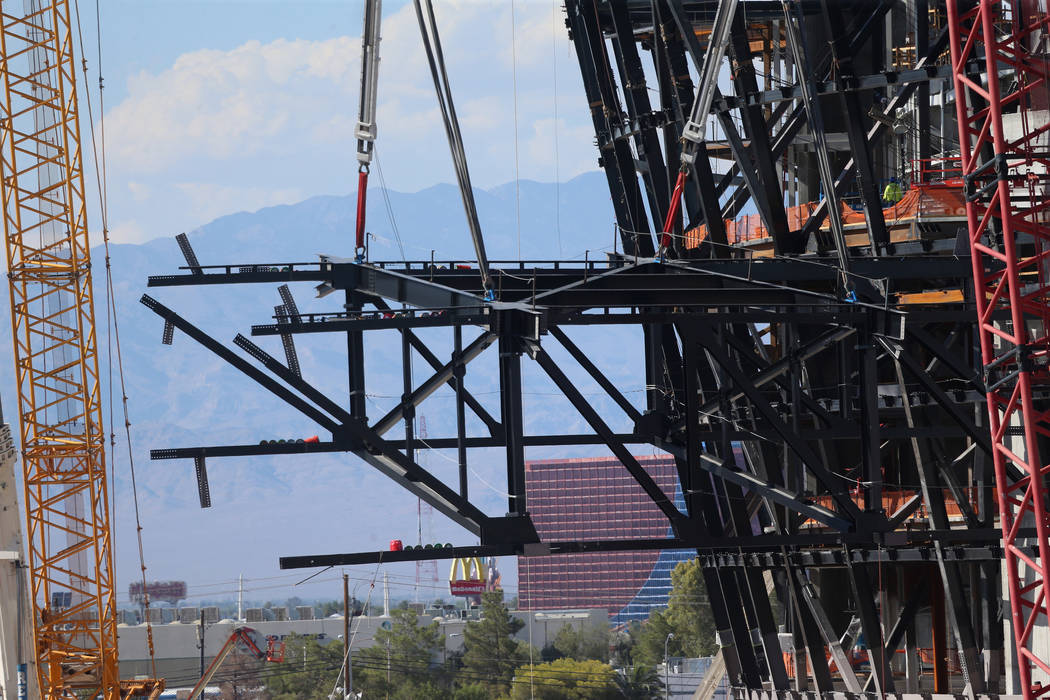 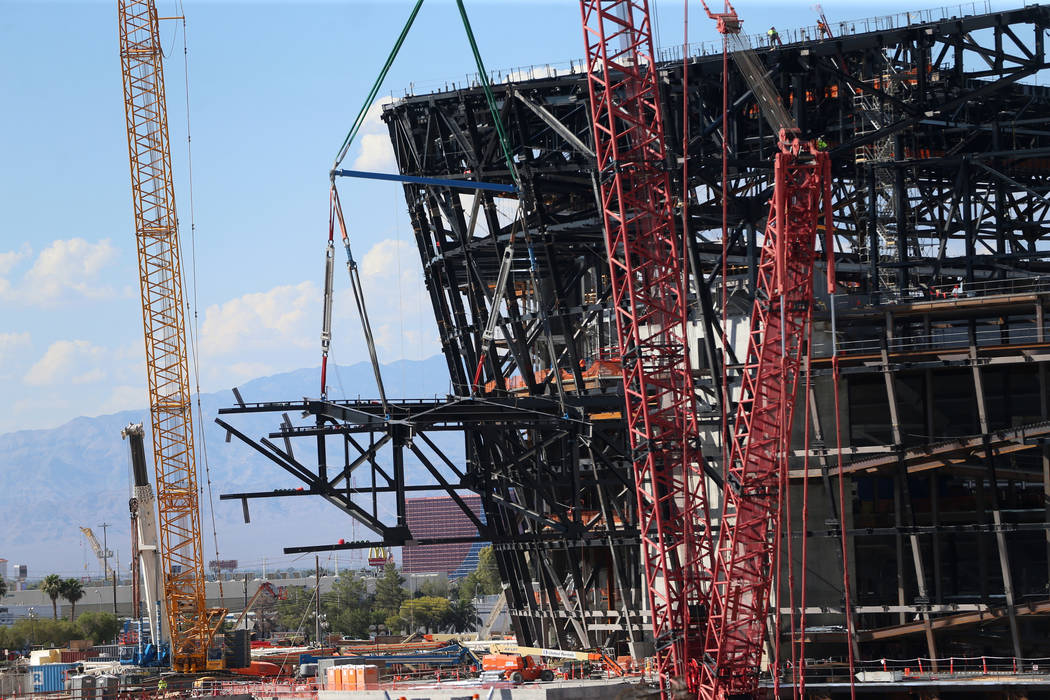 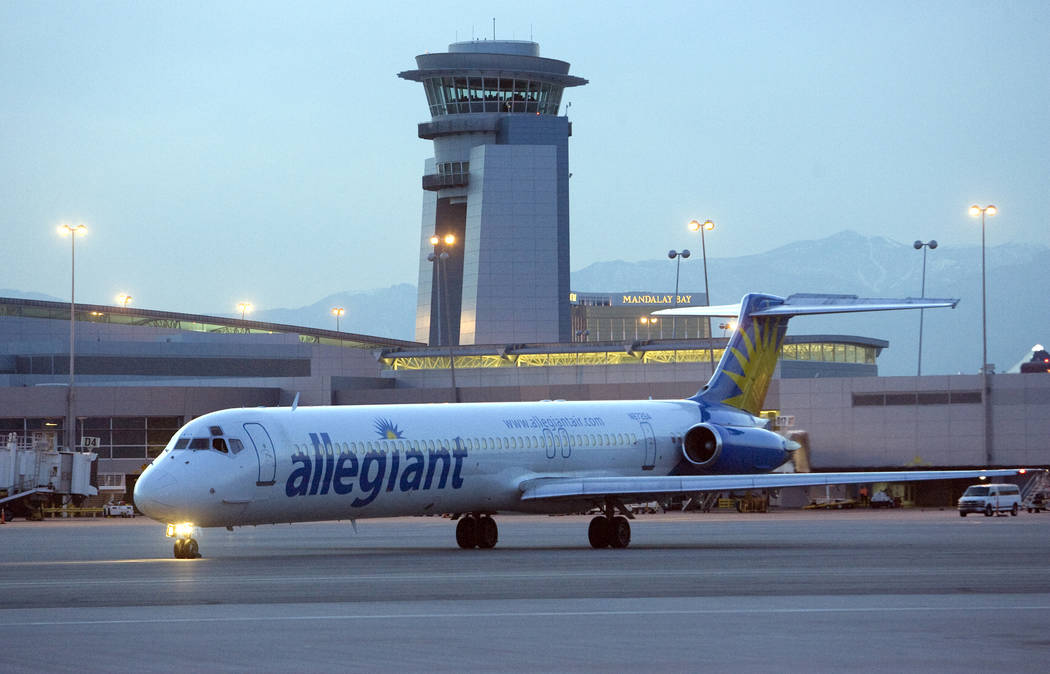 Allegiant Air continues its successful business model of offering low-cost, low-frequency flights to smaller, secondary-market airports. The company recently launched nonstop service from Las Vegas to Plattsurgh, N.Y., and begins service to Reno on Feb. 1.|||Las Vegas Review-Journal file photo K.M. CANNON/LAS VEGAS REVIEW-JOURNAL A MD-80 jet from Las Vegas-based Allegiant Air taxis for takeoff at McCarran International Airport Thursday, Feb. 18, 2010. (This photo was made while waiting for Air Force One, and can be used in any future story on Allegiant Air.) 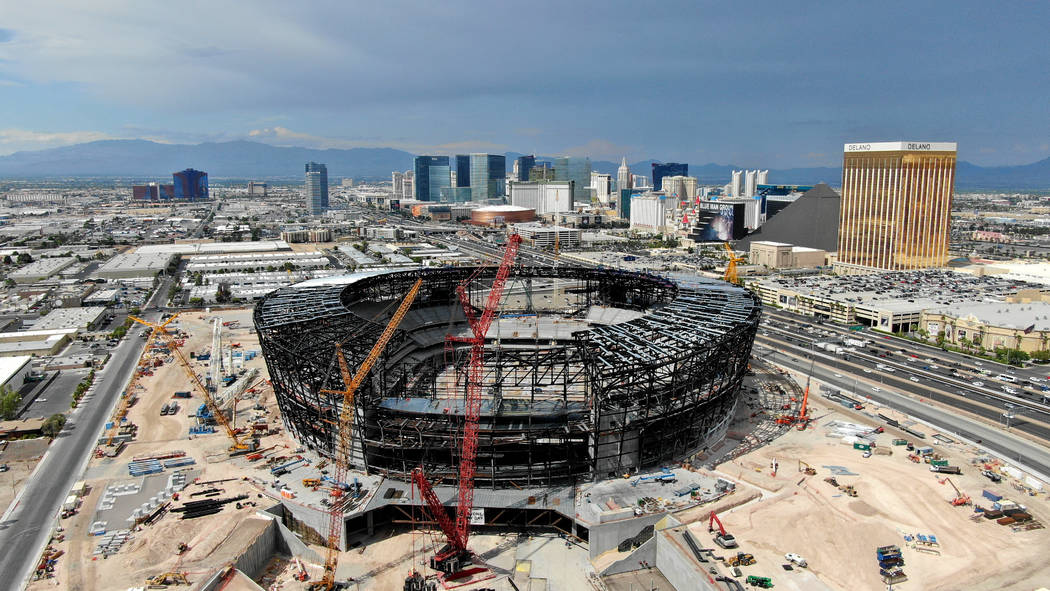 Could Allegiant Air’s name soon be flying over the new Las Vegas Stadium?

Neither Raiders nor airline officials will comment on the possibility, but Rob Yowell, president of Gemini Sports Group in Arizona, who has been involved in naming rights deals in his more than 20-year career in the business, said rumors abound that the team has locked in a deal valued at around $20 million to $25 million per year for an unknown period.

The #Raiders are nearing a naming rights agreement with @Allegiant for the new Las Vegas Stadium. #allegiantstadium

A naming rights deal for Allegiant may be a surprise, given its standing as a low-fare airline. But experts say getting naming rights to the stadium would boost the travel company’s brand and present new marketing opportunities.

“Other naming rights deals out there in that category are Emirates and American Airlines, which are all significant, higher-end branded airlines than Allegiant,” Yowell said.

Aviation expert Mike Boyd said an Allegiant naming-rights deal makes sense, even though the airline has a reputation for being thrifty.

“They’re the hometown team,” Boyd said Thursday. “Why shouldn’t they have a stadium?”

The Las Vegas Review-Journal reported in May that the airline’s parent company, Allegiant Travel Co., submitted a trademark filing for “Allegiant Stadium” with the U.S. Patent and Trademark Office.

At that time, the application was not tied to the $1.9 billion, 65,000-seat indoor stadium slated to be completed July 31, 2020. Allegiant jets often fly over the site when they take off from McCarran International Airport.

“The purpose was to protect the trademark of Allegiant Stadium for any future uses, should we need it,” the company said then in a statement.

Raiders president Marc Badain confirmed in May that Allegiant and the team had conversations regarding sponsorship opportunities tied to the stadium, but he said the naming-rights process was ongoing.

Badain, Raiders owner Mark Davis and representatives for Allegiant all declined to comment on a possible naming rights deal, which, according to a tweet from ESPN reporter Paul Gutierrez, appears to be close.

Yowell said getting a deal done a year ahead of the first game in the stadium would be a win for both the Raiders and Allegiant.

The team would remove the pressure of making the largest deal tied to stadium sponsorship, he said, and Allegiant would receive immediate publicity whenever the stadium is mentioned.

“They get to align themselves with a storied NFL franchise known around the world,” Yowell said. “One of the things that adds value in these deals is image association, and with the NFL in general, there’s a high value to that association. It’s an opportunity for them to market to all of the fan bases that will be traveling to Las Vegas.”

The deal also could mean special travel promotions for Allegiant.

“They can say, ‘Fly our airline, book this ticket package and you get a behind-the-scenes tour of the stadium, or you get a special seat upgrade’ or whatever,” Yowell said. “Those types of things can be worked out as the most important partner on the building.”

Nellie Drew, an expert in sports law and facilities, agreed stadium sponsorship would be a valuable marketing tool for Allegiant.

“It’s a way of making tangible an otherwise intangible product,” said Drew, director of the Center for the Advancement of Sport at the University of Buffalo School of Law.

“You’re mentioned every week during that season and for further events. There’s all kinds of print and media publicity. The announcers are always very careful to use that name when they’re calling the game, and it’s usually in prime-time spots,” she said.

Venue naming rights deals can be very lucrative for sports organizations, as they are generally for tens of millions of dollars per year for multiple years.

According to a list compiled last year by the Sports Business Journal, the most lucrative naming rights deal is tied to Scotiabank Arena in Toronto. The NBA’s Toronto Raptors will get $639 million over 20 years, or $30.4 million annually, from that deal.

Yowell said a Raiders deal with Allegiant for around $20 million or $25 million a year seems fair.

“For one, it’s the NFL. Two, it’s a multi-tenant venue with UNLV football and the Raiders and other large events scheduled to take place there, and third, obviously, it’s Vegas, which is not just a national city but a global city.”

The deal could include a mixture of cash and airline usage for the Raiders, like the use of a charter airplane. The team extended its deal with Hawaiian Airlines, its official airline partner for 19 years, to fly players and personnel to nine games away from Oakland in the 2018 season.

Allegiant is no stranger to professional sports sponsorship deals. Under a multiyear partnership, the airline is the “official domestic airline partner” of the Vegas Golden Knights, and its logo is featured on the ice at T-Mobile Arena.

In July, Allegiant was named as the “official airline of Minor League Baseball,” including the Las Vegas Aviators.