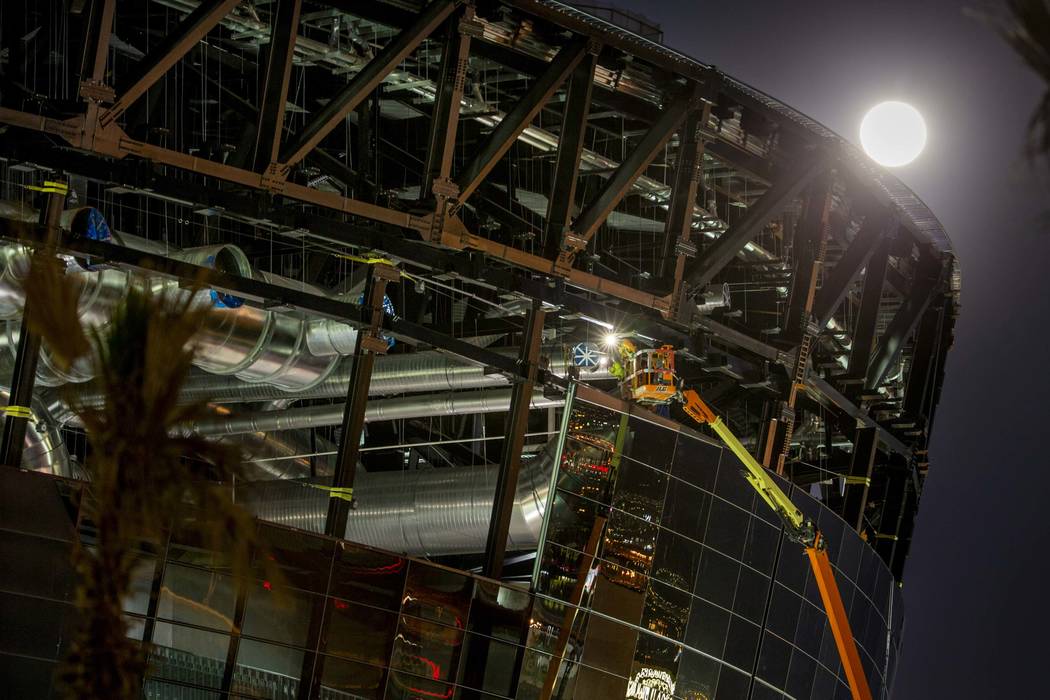 The Snow Moon rises behind Allegiant Stadium as a worked continues welding on the structure on Saturday, Feb. 8, 2020, in Las Vegas. (L.E. Baskow/Las Vegas Review-Journal) @Left_Eye_Images

More than 1,500 people will be hired for events at Allegiant Stadium when the 65,000-seat venue begins hosting athletic events and concerts.

Executives with ASM Global, the operations contractor for the stadium, and Levy Restaurants, which oversees food and beverage and restaurants, gave presentations Thursday outlining their commitment to fulfilling workforce and hiring requirements included in legislation that provided $750 million in public financing for the project.

Neumiia Duncan-Reed, director of human resources for Allegiant Stadium, and Jim Kohler, division president of Levy, made 20-minute presentations to the Community Benefits Oversight Committee on hiring processes and timelines.

The Community Benefits Plan requires that at least 55 percent of the work hours on event days must be performed by women and minority laborers.

Duncan-Reed said 80 to 85 permanent employees would be hired by ASM Global to manage the venue, due for completion by July 31.

Kohler said more than 2,000 are expected to be enlisted by Levy with about 1,500 working during stadium events.

Job fairs are expected to start by April. Kohler said Levy would establish a roster of workers for events. The company is already the food contractor for the Las Vegas Motor Speedway, T-Mobile Arena and the Las Vegas Ballpark in Southern Nevada.

Duncan-Reed said ASM Global plans to establish an advisory board of local leaders to help recruit workers. She said she has begun establishing contacts with several Southern Nevada chambers of commerce.

ASM will have a focus on career development for youths with a paid internship program, job shadowing and work readiness workshops.

Levy, founded as a single deli in Chicago in 1978, has grown throughout the years by pioneering premium food concepts in stadiums and arenas. The company partnered with The Walt Disney Company in 1989 and acquired Compass Group, the world’s largest food-service company, to leverage its resources.

In Las Vegas, Levy has 1,003 employees, about 80 percent of them women and minorities. When all of its existing venues are in operation, it has 3,800 workers providing food service.

3
Raiders reach back to their past to add a safety

4
Even with Karl Joseph, Raiders have needs at safety position