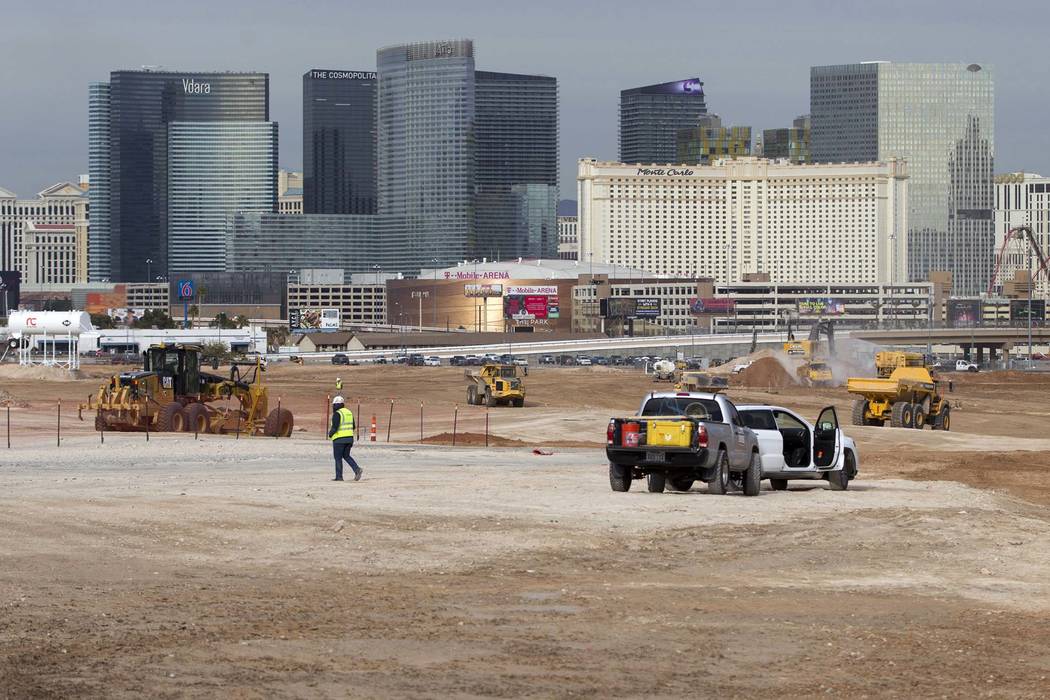 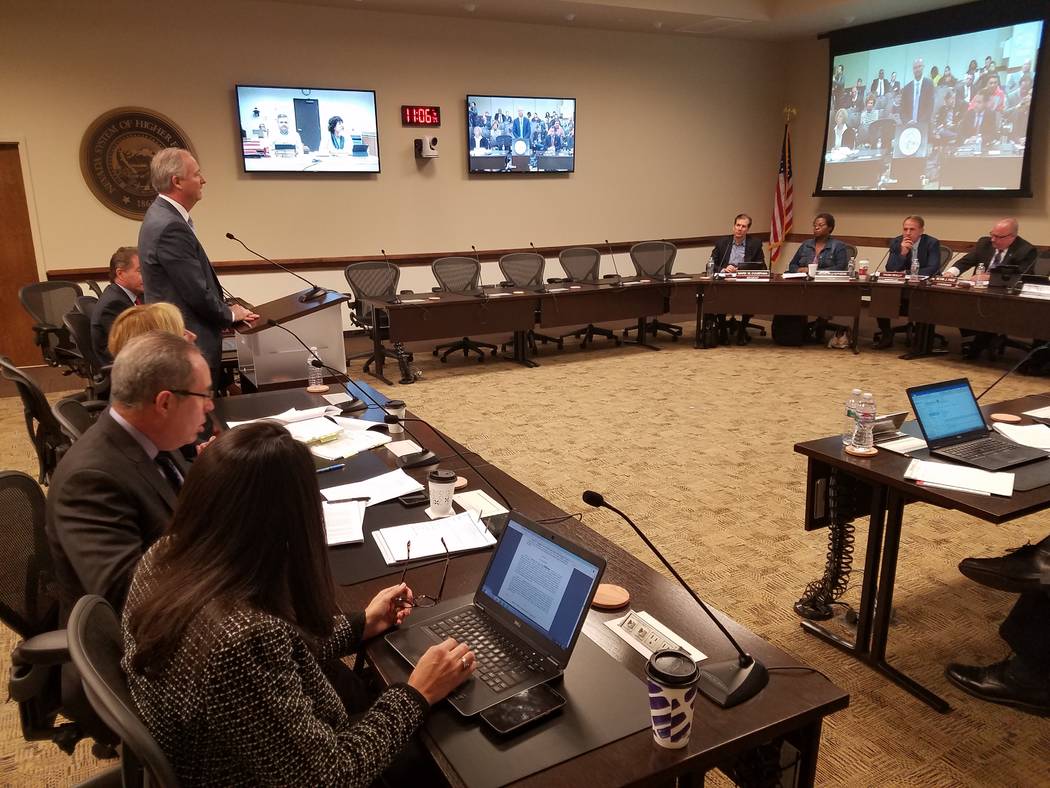 Steve Hill, chairman of the Las Vegas Stadium Authority, addresses the Nevada Board of Regents on the UNLV Joint-Use Agreement for use of the planned domed Las Vegas football stadium Thursday, Jan. 4, 2018, at a special meeting at the Nevada System of Higher Education building in Las Vegas. Richard N. Velotta/Las Vegas Review-Journal @RickVelotta 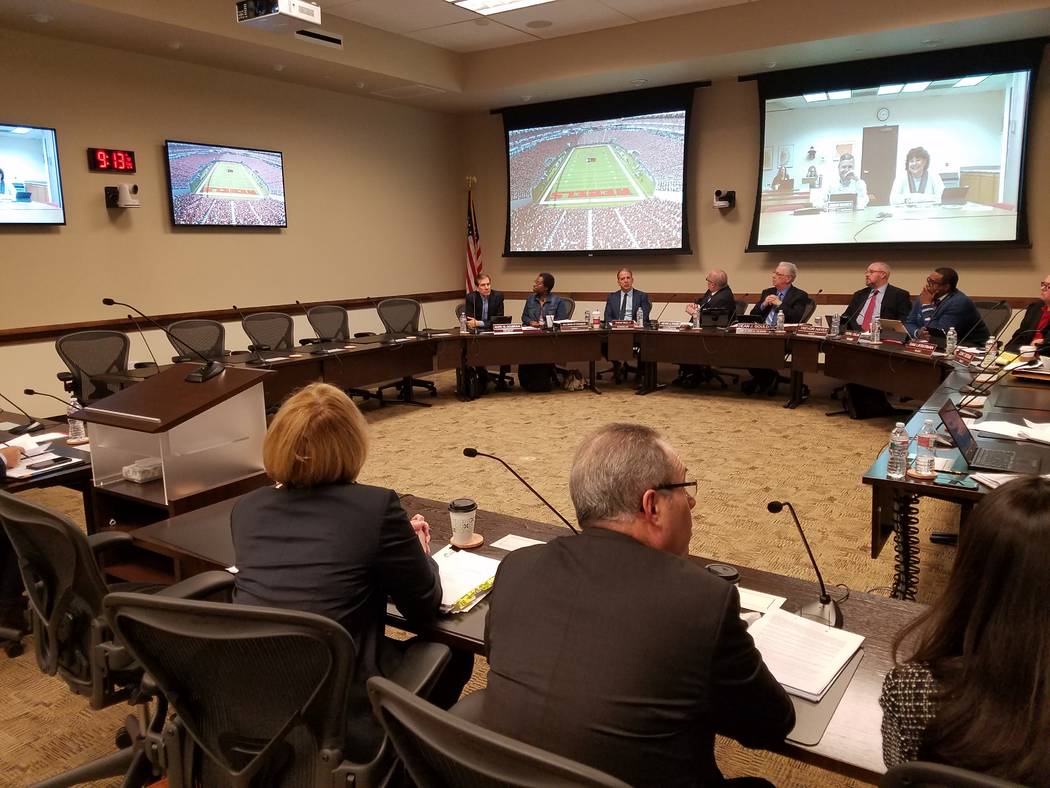 The Nevada Board of Regents gave every indication they’ll approve UNLV’s Joint-Use Agreement with the Oakland Raiders for use of the planned 65,000-seat domed Las Vegas football stadium when they vote Jan. 19.

No deal-killing issues emerged Thursday when regents picked through the 65-page document in a special meeting at which no vote was scheduled.

Regents questioned UNLV’s negotiating team, led by Chancellor Thom Reilly, about details of the 30-year agreement that will give the Rebel football team access to the stadium on UNLV game days.

The biggest concerns regents voiced were about the Raiders’ right to bump a scheduled UNLV game if the Raiders or the NFL choose to reschedule one of their games.

Regents were concerned that UNLV would be liable for cancellation fees in contracts with other schools if that ever happened.

Concern was also raised about the estimated pass-through costs the Raiders would charge the university since estimates of $250,000 a game have been floated. UNLV currently spends between $50,000 and $75,000 a game for expenses at Sam Boyd Stadium.

Late in the meeting, Las Vegas Stadium Authority Board Chairman Steve Hill told regents the high estimate was preliminary and didn’t account for the revenue UNLV would generate for sales and advertising at the new stadium.

The Raiders are still in the process of securing vendors for the stadium, which is expected to open in time for the 2020 football season. It’s possible that some UNLV sponsors would not be allowed to advertise if the Raiders establish an exclusive deal with a UNLV vendor’s competitor.

One other issue: There’s no clear escape clause for UNLV should the Rebels determine that the cost of using the stadium is too high. Reilly and Dan Etna, a New York-based contracted sports business attorney, indicated they would take the regents’ concerns to the Raiders before the board takes its Jan. 19 vote.

The joint-use agreement is a critical component in the Las Vegas Stadium Authority’s bid to complete a stadium development agreement with the Raiders by its Feb. 15 meeting. By that time, general contractor Mortenson Construction, Minneapolis, is expected to have a guaranteed price for the stadium project, estimated at $1.9 billion.

If the price turns out to be higher, the Raiders would be responsible for paying the extra amount since Senate Bill 1 locks the public contribution to the project at $750 million, which will be raised to pay down bonds through a 0.88-percentage-point increase in a tax on Southern Nevada hotel and motel rooms.

The most vocal lines of questioning from the regents Thursday came from Cedric Crear, who was concerned that UNLV would be without recourse if a scheduled Rebel game at the stadium was bumped by the Raiders.

Under terms of Senate Bill 1, Raiders and NFL games have priority for scheduling.

Midseason changes in schedules rarely occur in the NFL, but have happened. This year, the Raiders considered swapping the dates of its home-and-home series with the Los Angeles Chargers because a fire in Northern California severely affected the region’s air quality.

Crear suggested that the NFL could resort to adding Thursday or Monday games if a players’ strike led to early-season game cancellations.

After the meeting, Crear said he felt it was important to discuss all possibilities, but that he doesn’t expect that will deter him from voting yes for the agreement.

Asked if he would vote for the agreement, even if the Raiders have the authority to to bump games off UNLV schedules, Crear said, “Yes. I think it it’s something we’re moving forward with. I would love to see it better stated and defined. But I’m in favor of the Raiders coming, I’m in favor of UNLV playing in the stadium, I’m in favor of us growing our infrastructure, our tourism and our footprint.

“UNLV is going to be a part of something great here and Las Vegas is turning into an amazing sports city,” he said. “We’re a major player, so I really want to be a part of it and I think we should definitely support it. I just have some concerns. Maybe it’ll get changed, maybe it won’t.”

Reilly said he’d address the regents’ concerns with the Raiders, but he was enthused with the outcome of the meeting.

“If this is all that came out as major comments, I think we’re in good shape,” he said. “We feel that we can address the concerns that were addressed by the regents. I don’t think that’s going to be an issue at all.”

UNLV President Len Jessup and Athletic Director Desiree Reed-Francois also addressed the regents and after the meeting echoed they felt good about the prospects of getting an affirmative vote when the board next meets.