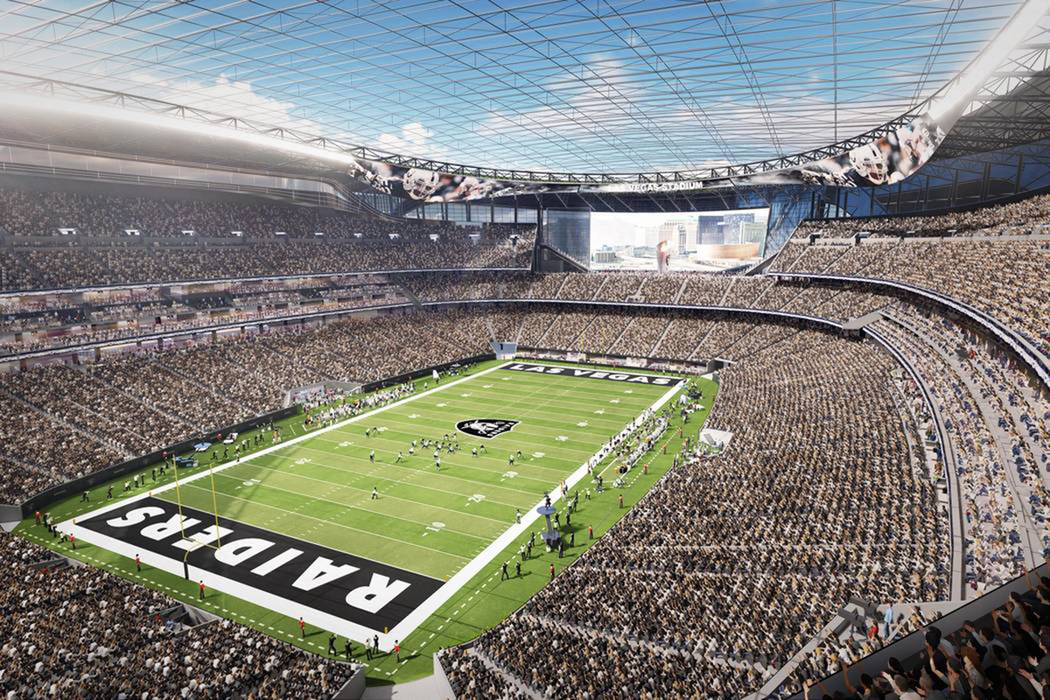 Six months ago, members of the Las Vegas Stadium Authority viewed October as the home stretch for wrapping up all the necessary paperwork required to build a $1.9 billion NFL-ready domed football stadium to relocate the Oakland Raiders to Southern Nevada.

October has arrived and the finish line is well out of reach.

In fact, when the authority meets later this month, members will consider taking advantage of a clause in the legislation enabling construction of the stadium to push the paperwork-completion deadline six months ahead into April.

The need for the Raiders to have a final construction cost estimate for the stadium is driving the delay. The team’s architects and engineers are still working to complete stadium designs and until they’re done, the team can’t zero in on a final cost.

“Both the law and just good business practice require that the Raiders have, and that we know that they have, a firm fixed price for constructing the stadium,” Stadium Authority Chairman Steve Hill said Friday.

“They’re not going to be able to have that fixed price until February,” Hill said. “That drives the timeline for the agreements. At the core of what the Stadium Authority is doing is making sure that everything’s done, everything’s known and everything is in place in order to approve using the public funds in the stadium project.”

The public funds are $750 million in revenue being generated by an increase in a hotel room taxes for payments on bonds that will be used to borrow money to build. By law, the Raiders have to spend the first $100 million before they can tap public funds.

In the first five months of tax collections, room tax revenue is about $2.6 million ahead of budget projections at $21.2 million.

Members of the authority board and the Raiders fully expect to complete their work on the agreements by February, but the delay has resurrected concern that contractors won’t be able to complete the stadium in time for NFL preseason games in the summer of 2020 and raised hopes of some fans in Oakland that the bad dream of seeing their team move to Las Vegas will somehow go away.

The issue played out last week when reports surfaced that the Raiders were negotiating to extend their lease at Oakland Alameda County Coliseum through 2020. But in fact, Coliseum Authority Executive Director P. Scott McKibben said he and Raiders executives haven’t talked about a lease extension since midsummer, and those were informal discussions and not a contract negotiation.

The lineup of agreements that have to be completed before Las Vegas stadium construction can formally begin is daunting:

– An enabling work memorandum. It’s relatively new to the list of documents that must win approval. The agreement between the Raiders and the authority was necessitated by pushing back the deadline and spells out what contractors can do and who’s liable for pre-construction work on the stadium site. The authority also is looking to hire a consultant to advise members on pre-construction matters.

– A joint-use agreement with UNLV. That will detail the UNLV football team’s use of the stadium with negotiations on advertising, signage, luxury box use and markings on the playing surface. There could also be some discussions about using UNLV parking lots on game days. The Nevada Board of Regents will review the agreement before it is presented to the authority.

– A Clark County development agreement. That will spell out the team’s plans for parking since the stadium site can’t accommodate the 16,250 spaces required by county code. It also addresses the stadium’s impact on traffic, utilities, drainage and emergency services.

– A community benefits plan. Technically, the authority doesn’t have to approve it, but members want to review the Raiders’ strategy to have 15 percent of the subcontracts and supply contracts filled by qualified small businesses, which include minority-, women- and veterans-owned companies. The Raiders also have distributed an outline explaining how players and team officials will contribute time to charitable events and to establish an oversight committee to monitor conformance.

-Final development agreements. The authority has signed off on some tentative agreements, but the final approvals will involve the authority, the team and Clark County.

Most of those sign-offs aren’t expected until later this year or early next year, but the enabling work memorandum is crucial as the Raiders’ contractors go to work on the 62-acre site at Interstate 15 and Russell Road.

“That agreement basically says that the Raiders have the ability to move forward and they are holding the Stadium Authority and the public harmless and they know that until all of these agreements are done that the public money is not going to go into that project,” Hill said. “And, we aren’t making any commitment by allowing them to move forward.”