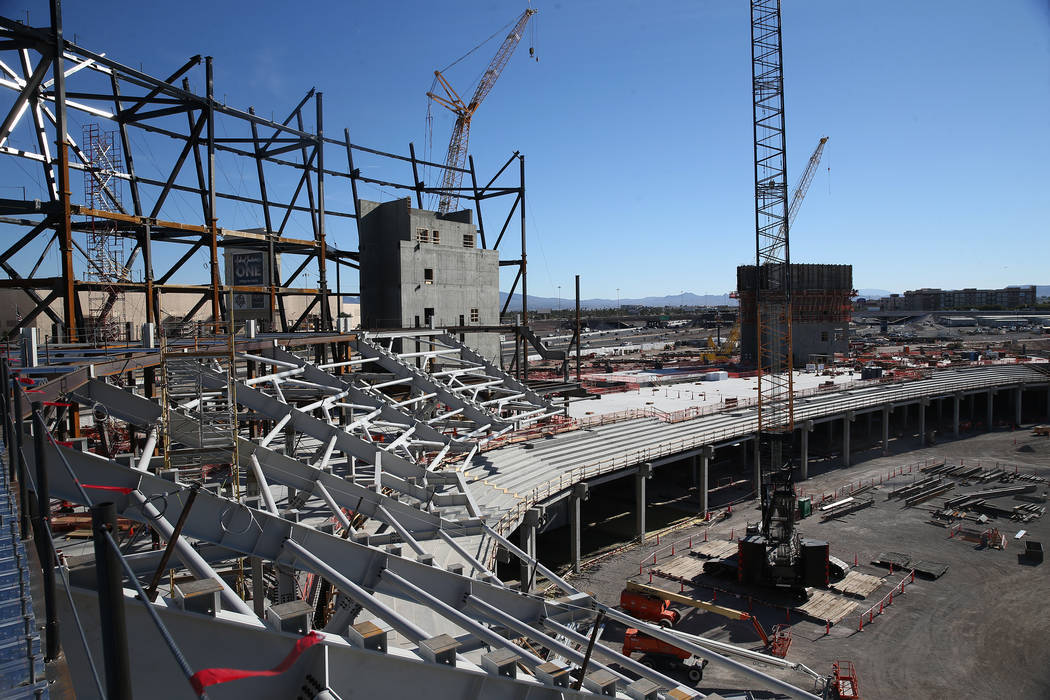 A quiet Raiders stadium construction site in Las Vegas as workers were off for the day in recognition of Veterans Day on Monday, Nov. 12, 2018. Erik Verduzco Las Vegas Review-Journal

Renderings of the new Raiders stadium being constructed in Las Vegas.

Las Vegas didn’t have to have a committee to get its first new sporting event of the new Las Vegas stadium era.

But new support subcommittees and sponsoring groups are now closer to being ready to assist Las Vegas Events and the Las Vegas Convention and Visitors Authority to create more events to fill the stadium and other Southern Nevada venues.

The Southern Nevada Sporting Event Committee recommendation establishes a system of support groups to assist the LVCVA in its efforts to attract or develop new special citywide events.

Approval came hours after the National Football League announced that the 2020 NFL Draft would be staged in Las Vegas. Draft festivities were one of the big events the committee was hoping to attract to the city as a boost to tourism. The site of the event hasn’t been disclosed, but it won’t be at the stadium, which isn’t expected to be completed by Draft Day.

“It was just a group of people that … worked together, put aside any self-interest and put together a bid package that blew away the NFL committee and the NFL owners,” Badain said.

The committee unanimously approved the recommendation to Gov. Brian Sandoval outlining a process for developing and retaining events to expand visitation to the area.

The committee has been working on the recommendation since June, meeting monthly at the direction of Sandoval under Chairman Paul Anderson, Sandoval’s director of the Governor’s Office of Economic Development. The recommendation is expected to be turned over to Gov.-elect Steve Sisolak — who served on the committee in his capacity as chairman of the Clark County Commission.

In Wednesday’s final meeting of the 20-member committee, board members approved a 38-page report to the governor explaining what it considers to be the best strategy for event development and coordination as well as a suggested bill draft to be considered by the Nevada Legislature when it convenes next year.

Most of the recommendations were the same as those outlined in the committee’s Nov. 14 meeting.

— Instead of a single Las Vegas Local Organizing Committee, the recommendation suggests one or more uncompensated ad hoc committees to be established by the LVCVA as needed. The committee reasoned that some special event bids could overlap, such as trying to attract a Super Bowl at the same time as an NCAA Basketball Final Four event, and the new plan would allow a group to focus on one event while another committee handles the other.

“It became clear that there may be a need for multiple Las Vegas Local Organizing Committees to deal with different events as they come up,” said Brian Gordon of Applied Analysis, which served as staff for the committee. “This new language is designed to address this alternative structure.”

— The formation of a Youth Sports Development Working Group was better defined. Mayor Carolyn Goodman had recommended the working group include private sector as well as public sector representatives and it was suggested that the city manager of each incorporated city in Clark County, the county manager of Clark County and the town manager of any unincorporated township of more than 6,000 people would be represented by two members from each municipality or township to address developing youth sports tournaments and events.

— The development of a 12-page bill that would be considered by Nevada lawmakers that would amend existing legislation related to county fair and recreation boards — the historic description of the LVCVA.