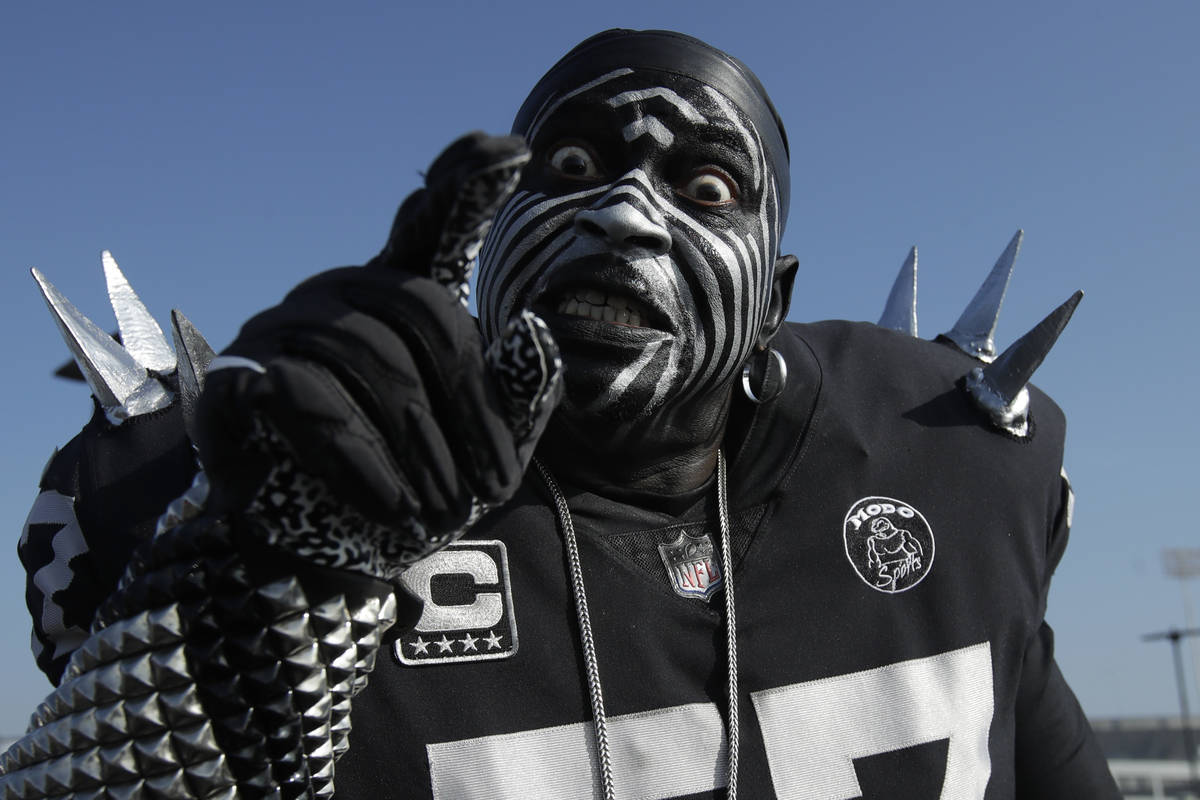 Oakland Raiders fan Violator poses for photos while tailgating at RingCentral Coliseum before an NFL football game between the Raiders and the Los Angeles Chargers in Oakland, Calif., Thursday, Nov. 7, 2019. (AP Photo/Jeff Chiu) 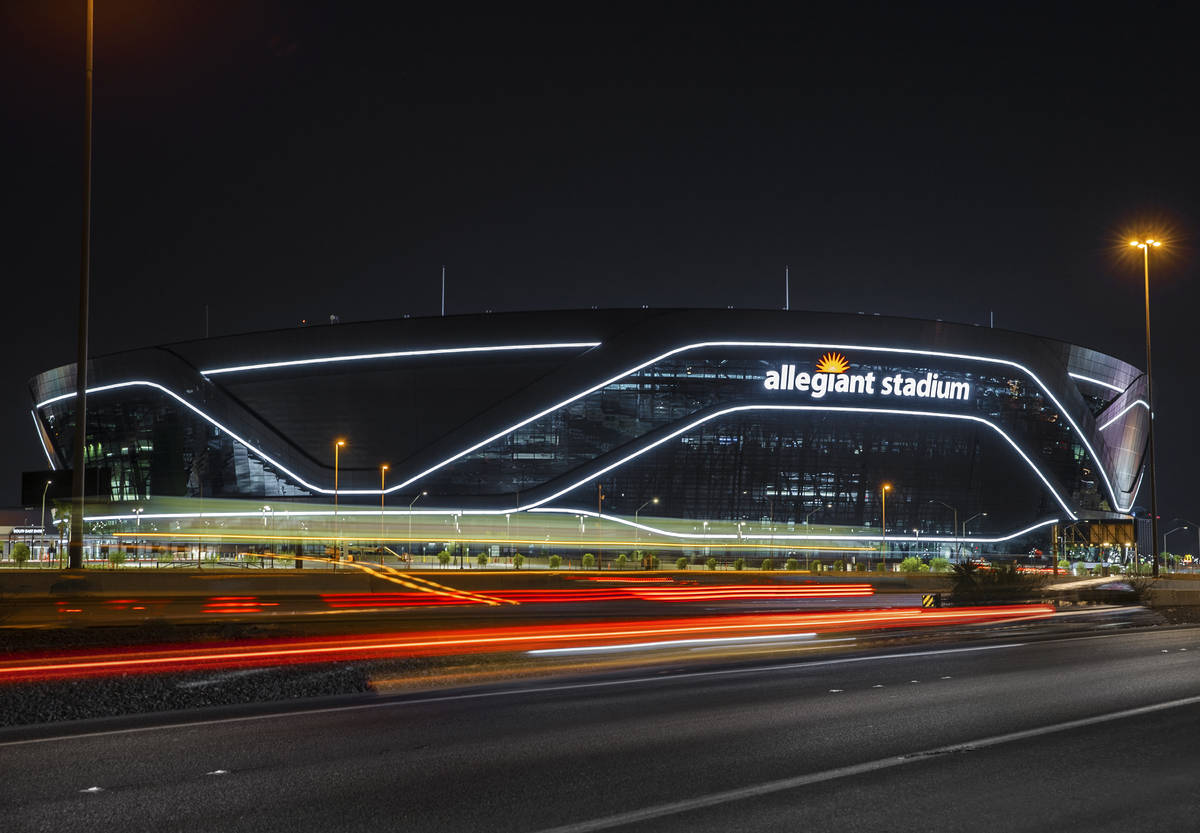 Images of the Raiders’ most notorious fans have grown nearly as synonymous with the organization as the team’s iconic logo. So one of the most anticipated aspects of the fancy new capital of Raider Nation is what the new fan base will look like inside Allegiant Stadium.

That answer won’t be provided for at least another year. Raiders owner Mark Davis has announced the team will play the inaugural season in its new stadium just off the Las Vegas Strip with no fans in attendance due to the coronavirus pandemic.

Davis said he hopes to be able to go through all the pomp and circumstance that comes with a new building for the 2021 season. That’s when Raiders fans who invested so much in the stadium through both public money in Nevada and the purchase of nearly $550 million in personal seat licenses can finally experience it live.

“All our dreams were coming true here in Las Vegas,” Davis said. “The whole city has just been phenomenal and then real life steps in the way.”

Good luck finding a ticket when fans are finally allowed inside. Every seat was sold for the 2020 season and there is no reason to believe enthusiasm will be dampened next year.

While there is a narrative those seats were snatched up by casino companies looking to reward big gamblers with tickets to an NFL game, team officials contend that number is less than 2 percent. The team said the vast majority of tickets were purchased in groups of two, four or six from individuals on the deposit list the team amassed in 2017 after the move was approved by the league.

According to the team, 60 percent of PSLs went to Nevada residents, with around 8,000 coming from Northern Californians. There is also a sizable group from Southern California.

South Point Arena director Steve Stallworth is one of the locals who has invested in watching his beloved Raiders with season tickets in the new stadium. He has regularly attended at least one home game per season, but he won’t have to travel anymore.

He just hopes the environment isn’t too sanitized.

“That group has been so loyal,” he said of Raiders fans in Oakland. “I hope we don’t end up with this corporate, business clientele that’s there to socialize and aren’t really fans of the team. … I think we all know the price of some of these seats and PSLs, I’m expecting to see a little more of a corporate crowd than what we see in Oakland.”

Wayne Mabry is anything but corporate on game days. A popular figure in the famed “Black Hole” in Oakland known as Violator, Mabry says he was priced out of tickets in Las Vegas. That doesn’t mean he plans to stop attending home games after missing just eight games in 24 years.

“I have more chapters to write in this legacy of mine,” said Mabry, who lives in Moreno Valley, California, and will have a shorter drive than he did to Oakland. “It was just a matter of finding the right fit because I know if there’s a will, there’s a way to get in there.”

Mabry believes many of his brethren will migrate from Oakland-Alameda County Coliseum and bring some of those traditions to Allegiant Stadium. An estimated 13 percent of PSLs went to fans who previously had season tickets in Oakland.

Traditions will also be created, particularly in pregame rituals. In Oakland, the party started outside the stadium early in the morning with a raucous tailgating atmosphere Davis has referred to as “the largest nondenominational gathering in the country.”

With limited tailgating areas around Allegiant Stadium, more of that will have to be done at more distant locations. But it’s easy to envision walking the Strip on Saturday night of a home-game weekend and seeing Mabry and some of his cohorts in regalia taking pictures and partying with friends and foes alike.

Things could look different inside as well, though a vast majority of black and silver is still anticipated.

While the group may be more spread out in Las Vegas, several longtime citizens of the “Black Hole” were able to purchase tickets in the south end zone.

Cisco Ortega, the former vice president of the Oakland chapter of the Black Hole group, happened to relocate to Las Vegas for his job. He is now the president of the Las Vegas chapter and previously told the Review-Journal he believes eight members of the group were able to secure tickets in that area.

“I know that area (end zone) is known as the Black Hole area,” Mabry said, “but the entire coliseum in Oakland we had Black Hole members throughout that whole stadium.”

Mabry hopes that doesn’t scare the people of Las Vegas. He believes the stereotype of Raiders fans being dangerous was some combination of media-perpetuated narrative and outsiders judging the book by its metal-spiked cover.

“It was always people that had never gone there that were spreading the dark stories about what we were,” he says of the Raiders’ fan base. “Everyone I’ve known over the past almost 30 years that has come to a game had a great time and couldn’t wait to come back. They would go home and tell friends to not believe what they hear, that you have to go break bread with those guys to get it.”

While critics of Raiders fans remain, it’s impossible to question their passion and nearly as difficult to argue the home-field advantage they have helped create in Oakland.

“I don’t see us ever having the home-field advantage like in the Bay because more fans from opposing teams will feel safer in that environment in Vegas than in Oakland,” he said. “People love to go to Vegas, so I think you’ll see more of an influx of opposing fans coming in on a weekly basis. But I’m calling it a new frontier. I think after a couple weeks of home games, the atmosphere will be outstanding. There’s a new energy, new anticipation. Then if the team starts gets hot, the sky will be the limit.”

Raiders fans hope it will be worth the wait.

MOST READ: Raiders
1
Raiders getting ready to welcome back young linebacker

3
Raiders mailbag: Could team have their eye on couple of veterans?