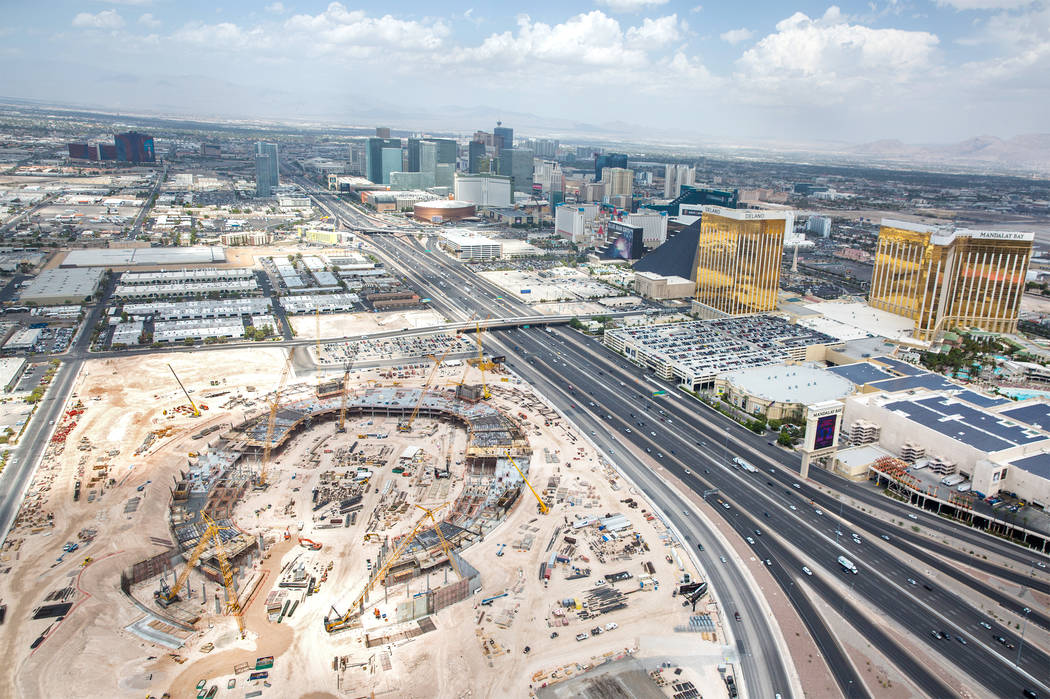 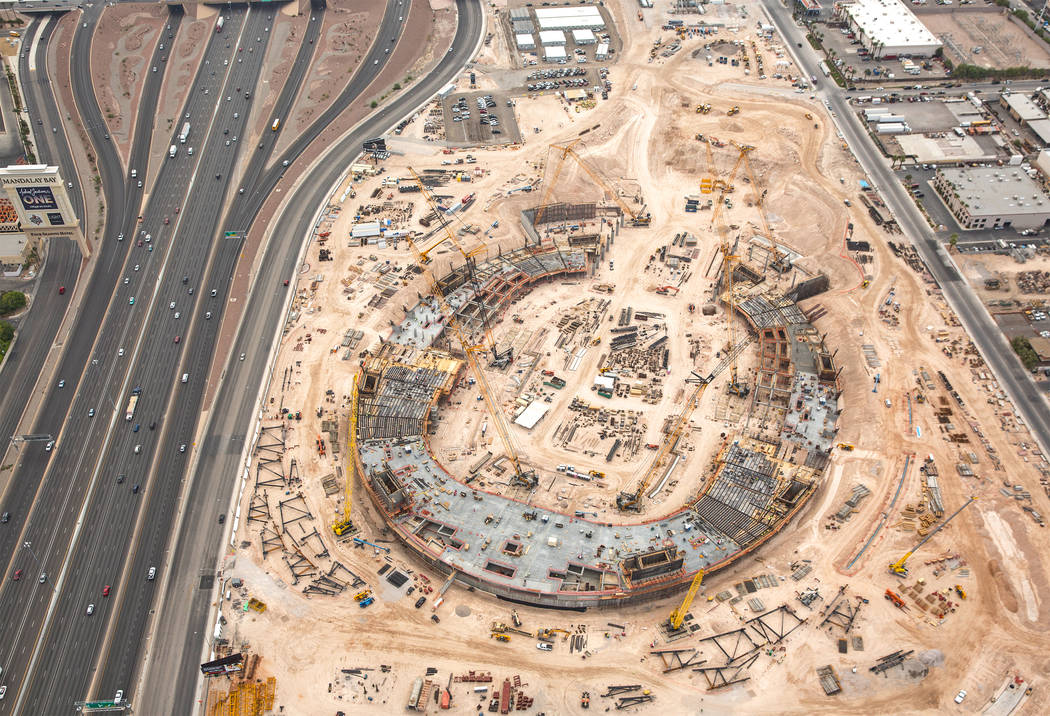 The Raiders have proposed four off-site locations to accommodate event parking when the 65,000-seat Las Vegas stadium opens in 2020.

The four locations don’t include a highly speculated bid to convert all or a portion of the Bali Hai Golf Club to event parking.

■ The Orleans, 3,700 to 4,625 spaces. The Raiders and Boyd Gaming Corp. have reached an agreement for the team to use the northern end of the hotel-casino property for parking.

■ The northeast corner of Arville Street and Tropicana Avenue, 1,025 to 1,175 spaces. The former Southwest Gas facility sits on 9.4 acres between Arville and Wynn Road.

The Clark County Commission will consider the team’s plan at a Sept. 5 meeting.

The report does not elaborate on agreements the team reached with the owners of the land to be considered for parking, nor does it give any additional details on game day activities. The Raiders have said developing a complete game day experience to include tailgating before football games is important to its success with its fan base.

In a cover letter to the county dated Aug. 16, Webb noted that the $1.8 billion stadium being built by the Raiders with a $750 million public subsidy from hotel room taxes is the first facility to be completely designed “in the age of rideshare.”

“Even though the plan’s parking capacity is sized as if it were not the case, we expect that the likes of Uber and Lyft will continue to steadily reduce stadium parking needs over time as patrons increasingly turn to rideshare as an alternative to driving and parking their own automobiles,” Webb said in his letter.

He also noted that the report doesn’t consider the presence of more than 25,000 existing parking spaces in businesses immediately to the west of the stadium, “although it is reasonable to expect that many patrons will choose to park in this area.”

MGM Resorts International operates the Mandalay Bay, Luxor and Excalibur hotel-casinos on the south end of the Strip.

Nearby resorts not considered

“Even though it is eminently reasonable to conclude that adjacent business parking lots and resort garages will each reduce the demand for dedicated stadium parking, the plan provides parking as if such reductions will not materialize,” the letter says.

In addition to describing the four off-site parking locations, the Kimley-Horn report compares the Las Vegas project with stadiums in other cities and the amount of parking controlled by the stadium or the team.

While the Raiders have access to 11,800 spaces, teams control 6,500 in Denver, 5,680 in Baltimore, 3,500 in Minneapolis, 2,258 in Cincinnati, 2,295 in Seattle and 180 in Atlanta. There is no parking controlled by the Cleveland Browns, although parking near their stadium is owned by the city and other entities.

Shuttle buses would transport people to events from all parking locations, according to the Raiders’ plan. The team estimates the longest shuttle bus ride from the farthest site, the property at Las Vegas Boulevard and Blue Diamond, would take 10 to 13 minutes one way.

The Raiders already have received a waiver from Clark County that allows the team to get an 85.4 percent reduction from the 16,250-space parking requirement for the stadium site, meaning that 2,375 spaces would be provided at the stadium.

Commissioners in September 2017 ordered the Raiders to deliver a parking plan within a year. 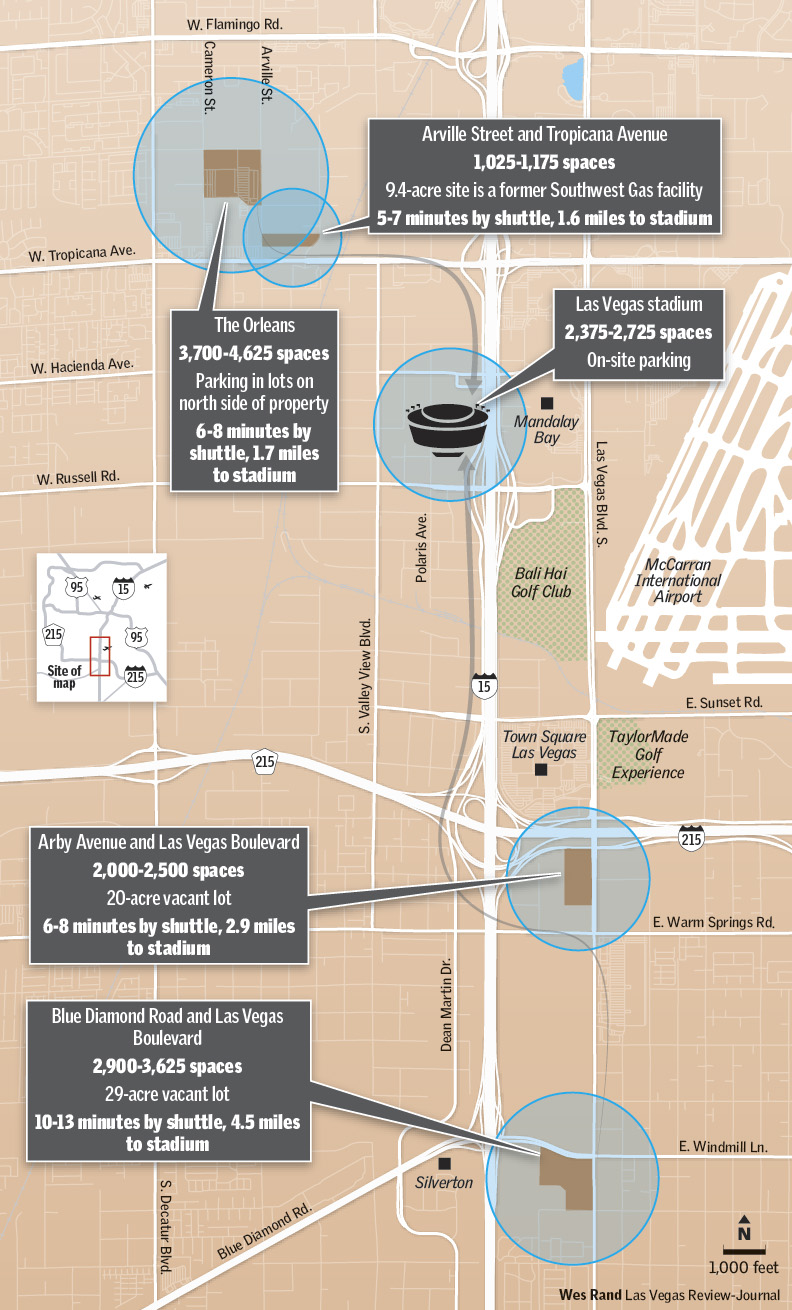