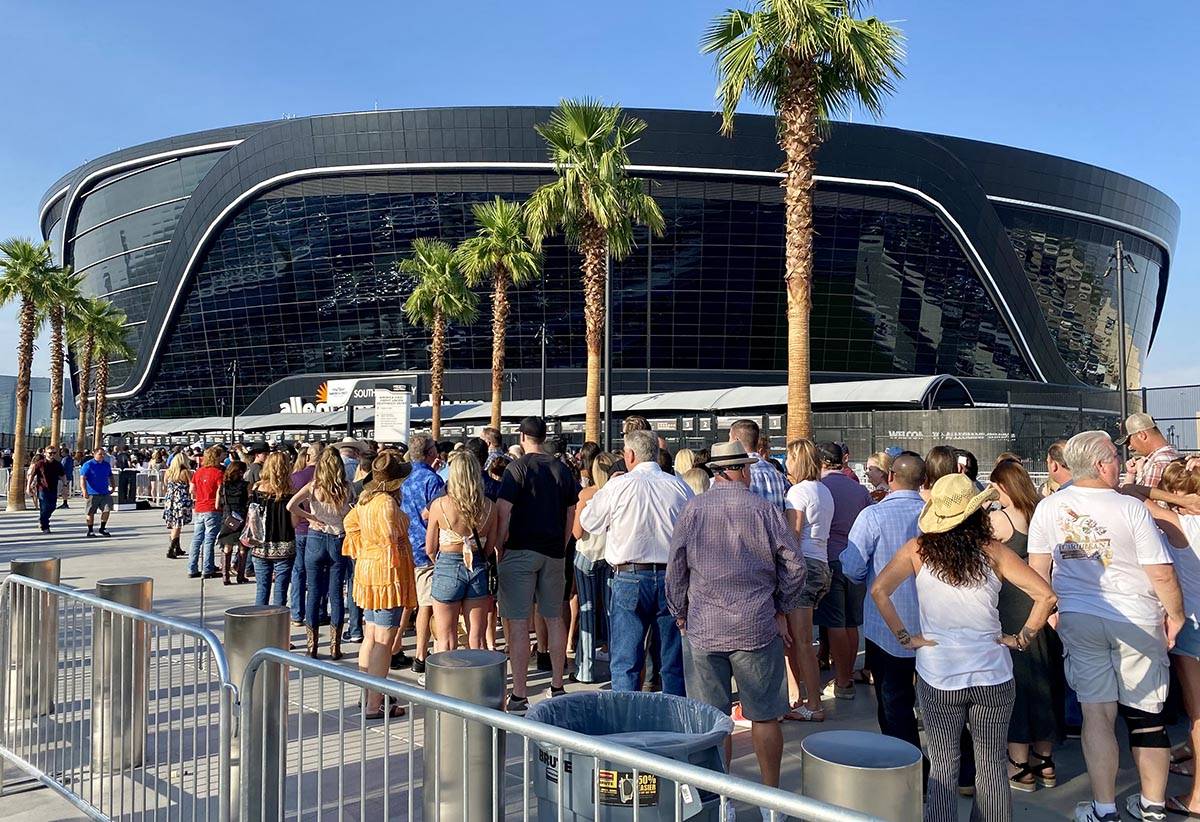 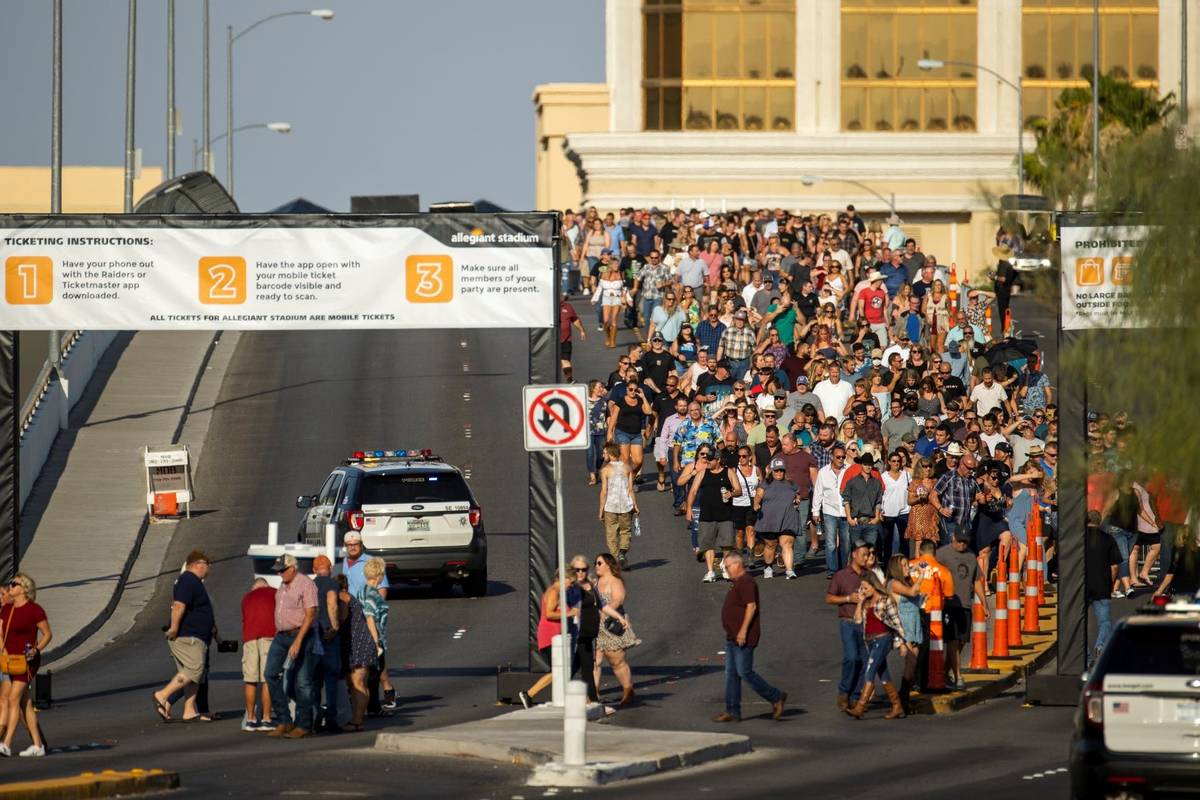 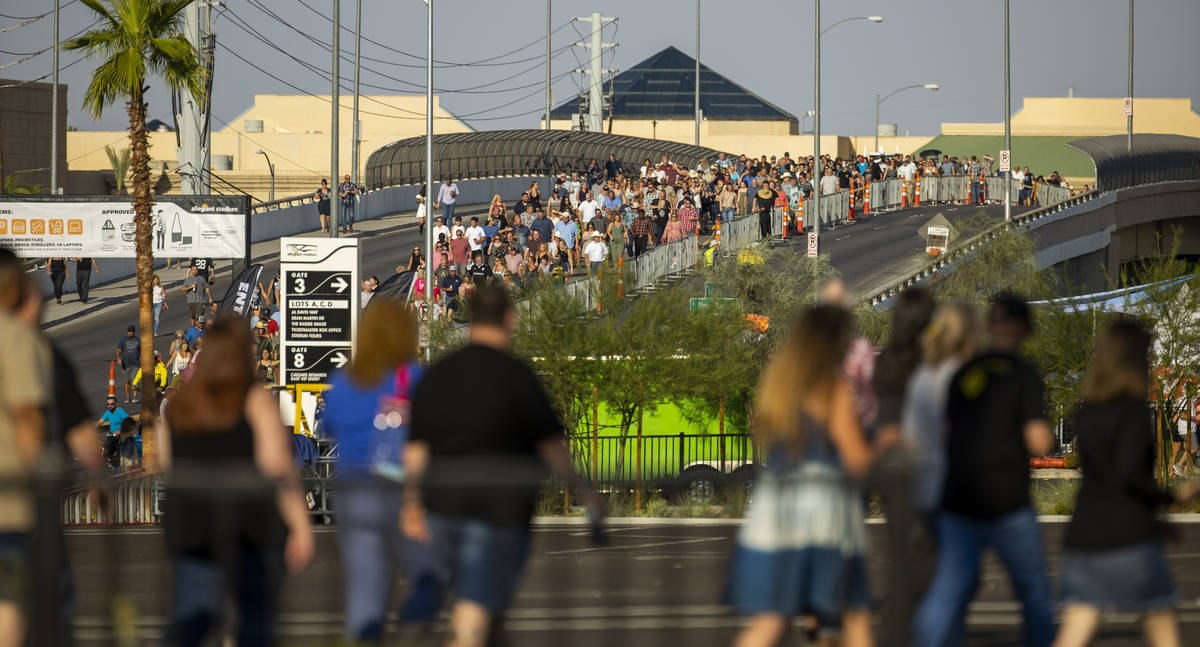 Fans make their way in the heat to the Garth Brooks concert at Allegiant Stadium on Friday, July 10 2021, in Las Vegas. (L.E. Baskow/Las Vegas Review-Journal) @Left_Eye_Images

Raiders President Marc Badain said area officials deemed the two events a success, but agreed there are issues that need to be addressed.

“We’re not naive, we know there were some challenges,” Badain said during Thursday’s Las Vegas Stadium Authority Board meeting. “I think we’ve been very open and transparent with this board and the public that we expected some. It’s going to be an iterative process and we’re going to learn something from every single event.”

The July 3 show put on by Illenium drew over 30,000 concertgoers to Allegiant Stadium and ran more smoothly than the July 10 Garth Brooks show that had around double the attendance, Badain said.

“The Garth Brooks concert with over 60,000 people coming to the stadium gave us some challenges,” he said. “The heat certainly didn’t help, but that’s not an excuse, that’s just fact.”

Badain said the number of people who walked from the Las Vegas Strip to Allegiant Stadium for the Brooks concert was likely much higher than the projected figure of around 24,000 fans. But he said the route over the Hacienda Avenue bridge was effective despite temperatures that tied Las Vegas’ record high of 117 degrees.

“The Hacienda bridge plan worked, putting the heat mitigation issues aside,” Badain said. “For purposes of events that we’ll see for 10 months out of the year we should be in better shape when everybody is using that.”

MGM Resorts CEO Bill Hornbuckle agreed, saying he thought the plan of using the Hacienda bridge, with many patrons starting their nights at the nearby Luxor and Mandalay Bay properties, worked as planned.

“For the magnitude of the first (sold out) event at that scale, I thought it would be a complete lockdown,” Hornbuckle said. “It wasn’t. Obviously there are challenges that have to be addressed, but overall the amount of foot traffic on the way down there and out, I think gives us a lot of confidence for the future.”

Badain noted that some fans and event staff had heat-related issues while walking across the bridge and waiting to get in the stadium. He said some additional heat mitigation features are already planned, including placing additional misters, shade tents and water stations around the area.

“In addition to patrons that were having heat-related issues, we had a lot of staff that had heat-related issues,” Badain said. “That created a butterfly effect with some of their operations affected by the fact that we were already short-staffed in some areas, like many people are.”

Despite the problems, Badain said 95 percent of the fans attending the Brooks concert were in the stadium by the time the show began at 7:55 p.m.

Interstate 15 didn’t see any major backups before or after the show, according to Badain, something that was a concern with two other major events — UFC 264 at T-Mobile Arena and Bruno Mars at Park Theater — occurring in the vicinity around the same time.

The bulk of the traffic issues involved the surface streets around Allegiant Stadium, which didn’t impact the other nearby events, Badain said.

“We heard no reports of traffic issues at T-Mobile Arena or on the Strip due to the challenges we had at Allegiant Stadium,” Badain said. “Most of the issues were confined to Russell Road and to Dean Martin (Drive). We’ve had a handful of meetings already internally and with some of the outside agencies — Metro, fire, the county public works.”

A meeting with Clark County officials to address a list of issues is planned for Friday, Badain added.

“We know there were some patrons that were affected that had long commute times and a long time getting into the stadium and that’s certainly not ideal,” he said.

When the concert ended, Badain said the surrounding parking lots were cleared in a little over an hour.

“For anyone who has been to events around the country, any type of stadium event that you can get out in an hour or so is a success,” he said.

Stadium authority chairman and Las Vegas Convention and Visitors Authority President Steve Hill said the way the roads in the area are used will be looked at in the wake of the two events.

“Traffic patterns will be analyzed and steps that we can take in order to improve it will happen,” Hill said. “But when you have 65,000 people at any major event, any place you go, not just Las Vegas, you’re going to have traffic.”

Badain said of the over 90,000 combined people who attended Illenium and Garth Brooks concerts at Allegiant Stadium over the past couple of weeks, the majority of them were from out of state.

“Overall they brought a lot of visitation to the area, which was one of the goals that we set about this project five years ago,” Badain said. “The majority of the attendees were from out of town, based on our research.”

With a string of events taking place at Allegiant Stadium in the coming weeks — starting Aug. 1 with the Concacaf Gold Cup final — officials won’t have long to put their mitigation efforts to the test.

“We’re going to work on everything that was a challenge,” Badain said. “We have six events from Aug. 1 through Sept. 4, so we have a lot of work ahead of us and we will continue to learn different patterns on different events and we’ll continue to improve what we need to improve.”