If you are having problems accessing today’s e-Edition, please click on this link VIEW E-EDITION
New details unveiled to the Vegas Stadium Authority Board. (Nathan Asselin/Las Vegas Review-Journal) 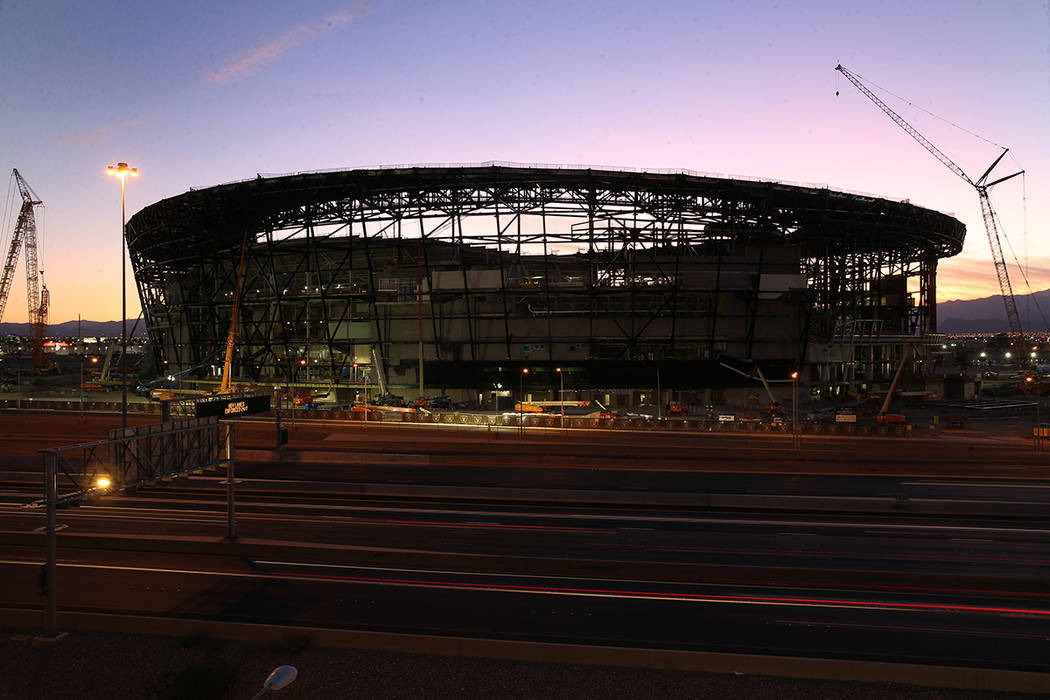 Don Webb, chief operating officer of the stadium development subsidiary, stressed that the construction budget increase was the result of third-party sponsorship agreements and better-than-expected sales of personal seat licenses in advance of 2020 season tickets.

Webb said crews are upgrading suites, adding video screen consoles to some club seating areas and developing space in the stadium’s event level that previously hadn’t been programmed. That includes the addition of new concession carts in some areas.

Webb also noted that revenue from third-party sponsors, such as Allegiant Travel Co., will enable the construction of signs on and around the stadium. Signage hadn’t been completely budgeted pending the signing of a naming-rights agreement.

The authority board also was told Monday that just more than 1,600 workers are on the site, many of them working on projects ahead of schedule, a tactic that is keeping the Mortenson-McCarthy Joint Venture general contractor on schedule for the stadium’s planned July 31 completion.

“Even though the building’s exterior walls and roof have not yet enclosed the structure, interior partitions, tile work, finishes and even case work and sealants are being completed inside the stadium,” Webb told the board. “This is an example of how we’re able to make up some of the delays, roughly 60 days in steel installation, by taking what normally would be done after the building was fully encased and closed in and doing that work out of typical sequence.

“The risk associated with that, obviously, is that if we have driving rain, some of this may be damaged, but we’ve taken mitigation efforts in order to minimize that chance and selected materials and locations so that they’d be less vulnerable,” he said.

The Raiders’ sale of personal seat licenses, or PSLs, has been more successful than the team expected.

After the meeting, Raiders President Marc Badain said that PSLs are about 95 percent sold out and that there are about 3,000 PSL slots left. The team will likely end sales by Thanksgiving. The Raiders’ sales team is still reaching out to people who have placed $100 deposits on PSLs.

Webb told the board that while the project continues to be on time, one of the most daunting aspects of the project is up next: raising the crosshatch pattern of stainless steel cables about 200 feet from the floor to the roof to support the translucent ceiling.

The cable lift is about a six-week process, and once the cables are hydraulically lifted about 100 feet off the ground, a late crew will be able to install some 800 segments of the precast lower-level concrete seating bowl into place.

Action on signs and parking is also coming up.

Stadium officials are scheduled to appear before the Clark County Commission on Wednesday to seek waivers to existing sign codes for the stadium.

The exterior of the stadium will appear like a massive video board similar to the features of T-Mobile Arena. The team says the waivers can be justified because of the unique nature of the stadium.

The authority board also got its first look at a proposed lease agreement for 19.2 acres, an L-shaped collection of seven parcels near the northwest corner of Las Vegas Boulevard and Warm Springs Road, just over three miles from the stadium. It includes parking space for more than 2,300 vehicles and an area for shuttle bus loading and unloading.

A subleasing agreement between the authority and the Raiders also is under consideration. The board is expected to review the lease and sublease at its November meeting.

After the meeting, Badain said that the team has agreements in place to house 9,000 vehicles and that plans call for the addition of more parking that will enable between 60 and 70 percent of those attending events to be able to walk from their vehicles to the stadium.

Badain said the team is consulting with focus groups of Southern Nevada PSL owners for advice on parking and tailgating.