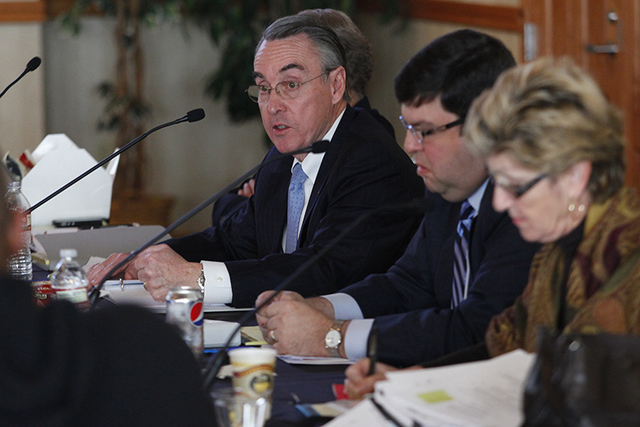 Don Snyder, chairman of the UNLV stadium board, speaks during a board hearing at UNLV's Foundations Building on Dec. 12, 2013. The 11-member board delayed the stadium project by two years last month. (Chase Stevens/Las Vegas Review-Journal file)

UNLV’s campus stadium initiative, started with much fanfare years ago and marked by impressive renderings and a dramatic breakup with a private partner in 2013, culminated Thursday with the stadium board approving resolutions endorsing a venue at the university — someday.

The 11-member the University of Nevada, Las Vegas’ stadium board, which has spent nearly a year checking the financial prospects for a campus stadium, delayed the project by two years last month.

The panel — made up of hotel-casino representatives, higher ed regents and other public officials — officially endorsed resolutions saying the university needs a campus stadium and that “it could be” a $523 million, 45,000-seat open-air version with a shading system. The $523 million includes $100 million for site and infrastructure costs.

“It is anti-climatic,” acknowledged Don Snyder, UNLV’s acting president serving as the stadium board chairman.

The financing is fuzzy, though. The board approved a resolution that cites private funding only as one way to pay for the stadium, without identifying any public funding. A countywide sales tax increase was discussed in previous meetings but isn’t in the resolution.

In fact, the resolution says that “public revenue streams have not fully recovered” and that the stadium “is not feasible at this time.”

That explains why the board voted two weeks ago to delay the project, with UNLV officials shelving plans until 2017 to lobby the Legislature for help.

The panel spent most of the meeting tweaking resolution language, with scant discussion of the project itself.

The resolutions will be part of a report that will be sent to the Legislature by month’s end.

“This must be very exciting for the audience,” Snyder cracked as the board combed through the language.

Board member and Regent James Dean Leavitt, who lost his battle for a domed stadium proposal, quipped during the discussion, “I put on a hat on my head when I go out for five minutes.”

The concept of an enclosed stadium didn’t fade away without comment, however. Several board members argued for language indicating that if the economy improves in two years, a domed stadium should be considered.

Board member and Regent Mike Wixom chimed in, “I do want to see some flexibility.”

In the end, the panel resolved only that the venue “could be” open-air.

“Our objective was not to lock anything into place but to keep the process moving,” Wixom said after the meeting.

The resolutions also cited two potential locations — one next to Thomas &Mack Center, the other off-campus at Tropicana Avenue and Koval Lane.

The original proposed stadium site on the northeast corner of Harmon and Swenson avenues was not feasible because of McCarran International Airport and Federal Aviation Administration flight issues.

“It will give us a chance to see the final report,” Snyder said.