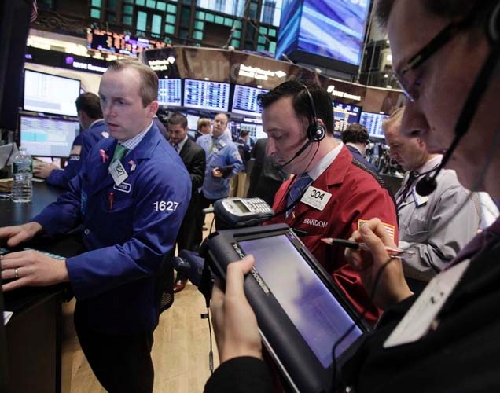 NEW YORK — A strong start to the U.S. shopping season and fresh proposals for a far-reaching solution to Europe’s debt crisis sent stocks sharply higher Monday. The Dow Jones industrial average soared 300 points in afternoon trading, making up more than half of the ground it lost last week.

Initial reports show a record number of shoppers hit the mall or bought gifts online during the holiday weekend. Thanksgiving weekend is a make-or-break time for many retailers. For the past six years, Black Friday has been the biggest sales day of the year.

The retail numbers add to a growing set of indicators, including steady drops in the number of applications for unemployment, that suggest the U.S. is far from the second recession economists had begun to fear in August.

“This goes in stark contrast to the gloom and doom that had been over markets,” said Rob Lutts, president of Salem, Ma.-based investment firm Cabot Money Management. “A lot of the stocks I follow have been more oversold than any time I can remember in the last few years.”

Markets in Europe also rose sharply as leaders there discuss new approaches for containing the region’s debt troubles. One plan calls for Europe’s most stable economies jointly sell bonds to provide assistance to the region’s most indebted members, like Greece and Portugal.

Investors are hoping that the recent signs of deterioration in the debt crisis will finally get Europe’s leaders to agree on a package of measures that can ease market concerns over whether the euro currency itself can survive.

A record 226 million shoppers visited stores and websites during the four-day holiday weekend starting on Thanksgiving Day, up from 212 million last year, according to early estimates by The National Retail Federation released on Sunday. They spent more, too: The average holiday shopper spent $398.62 over the weekend, up from $365.34 a year ago.

It’s still unclear whether retailers’ will be able to hold shoppers’ attention throughout the remainder of the season, which can account for 25 to 40 percent of a merchant’s annual revenue.

Questions also remain about the situation in Europe.

Credit rating agency Moody’s warned on Monday that the “rapid escalation” of Europe’s financial crisis is threatening the creditworthiness of all euro zone governments, even the most highly rated. Only six of the euro zone’s 17 countries have the top rating — Germany, France, Austria, the Netherlands, Luxembourg and Finland.

The crisis in Europe will likely be the focus as President Barack Obama hosts European leaders for a summit Monday.