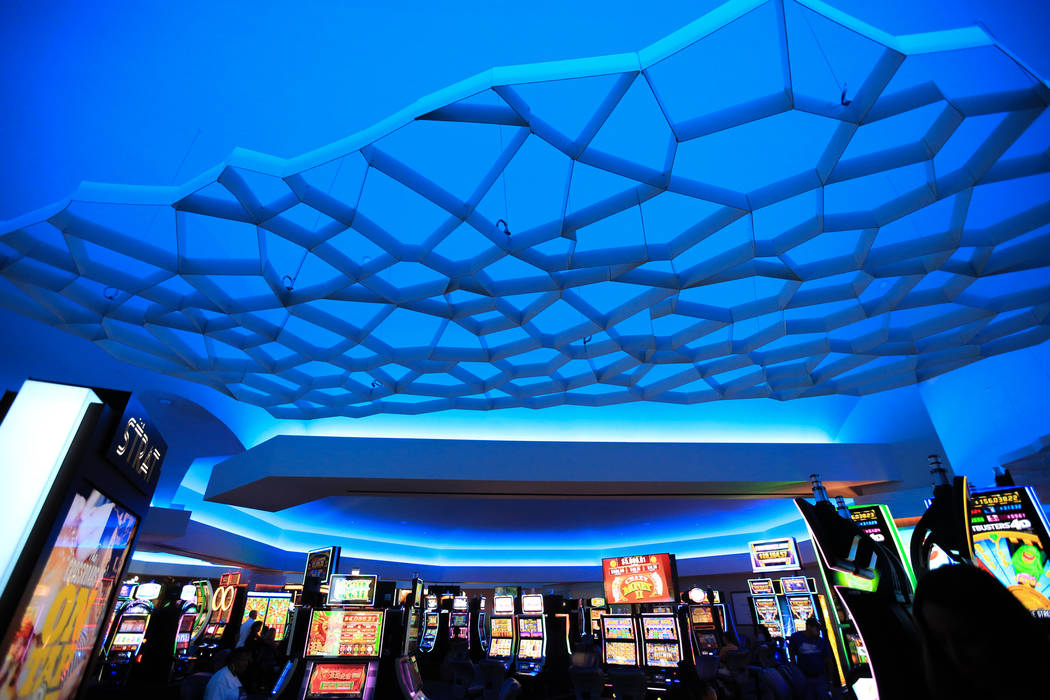 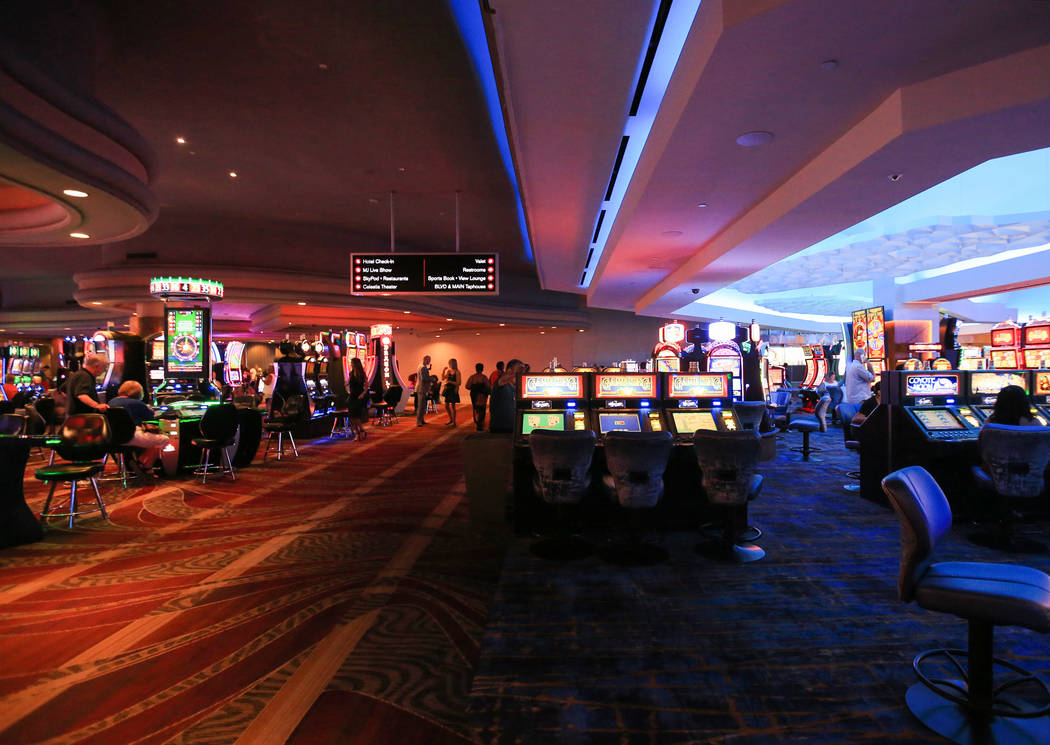 A change in carpet and lighting shows the current boundary between new renovations for The STRAT, right, and the old look of the Stratosphere, left, at The STRAT hotel casino in Las Vegas on Friday, July 12, 2019. Brett Le Blanc/Las Vegas Review-Journal 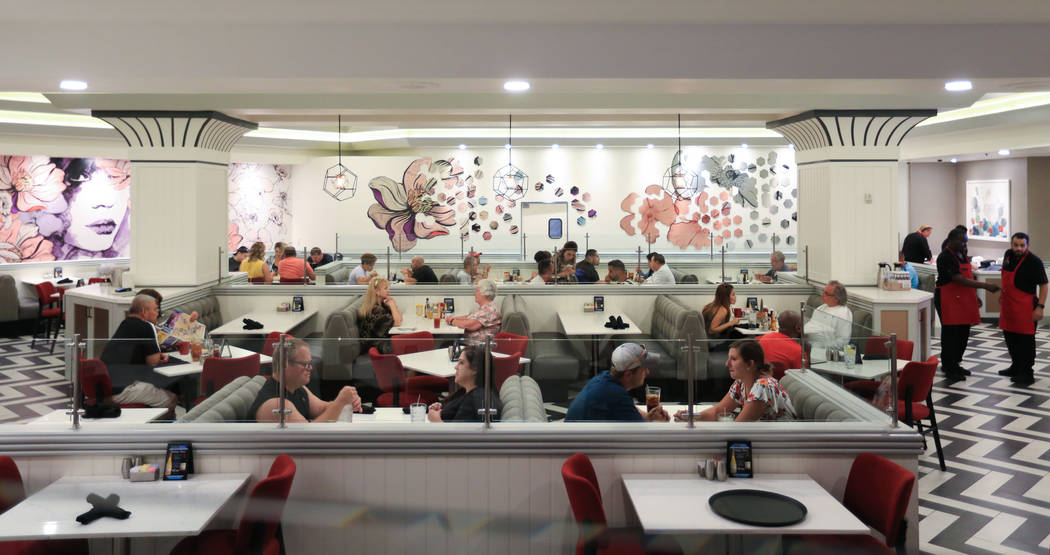 Diners enjoy a meal at the STRAT Cafe, a new eatery opened as part of renovations to The STRAT at hotel-casino in Las Vegas on Friday, July 12, 2019. Brett Le Blanc/Las Vegas Review-Journal 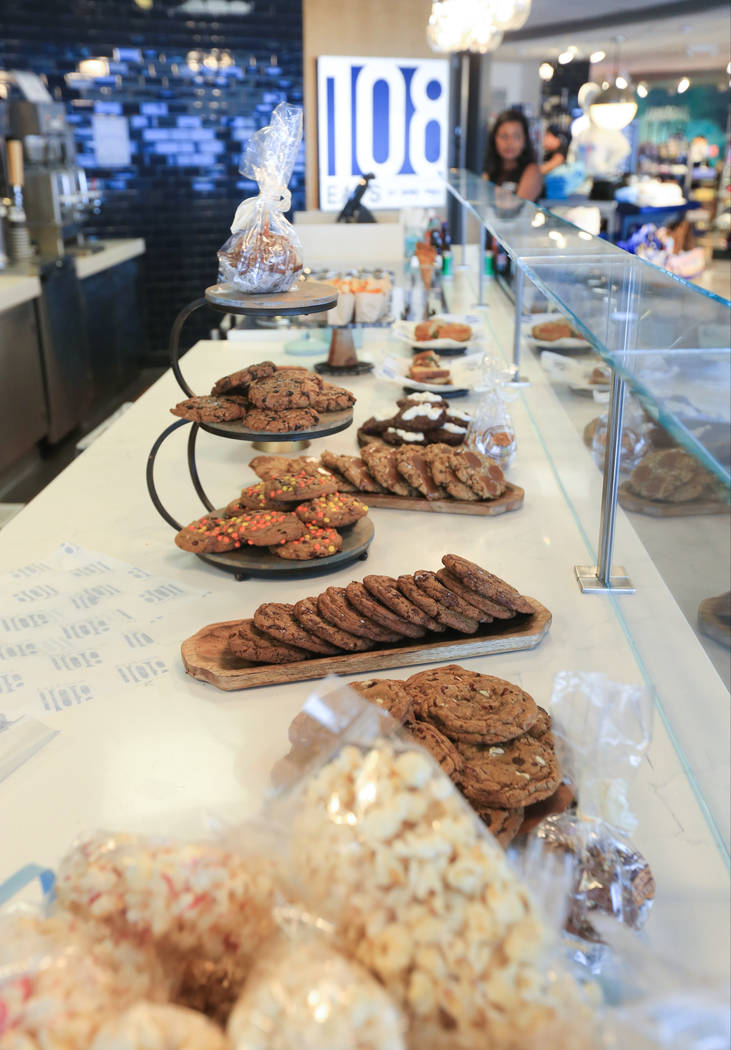 108 Eats is a new cafe by chef James Trees that features cookies, ice cream and sandwiches at The STRAT hotel-casino in Las Vegas on Friday, July 12, 2019. The Cafe opened as part of ongoing renovations to The STRAT. Brett Le Blanc/Las Vegas Review-Journal 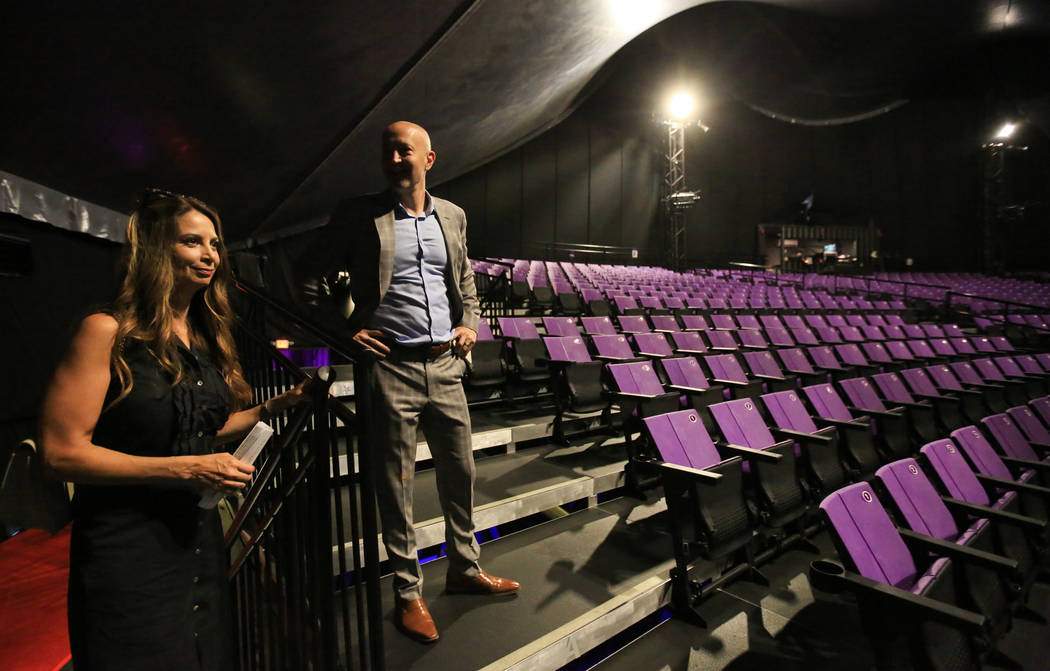 Brad Goldberg, senior vice president of marketing and entertainment for Golden Entertainment, right, and Stephanie Wilson, left, CEO and Founder of Wicked Creative, check out the stage and seating for the new show Celestia at The STRAT hotel casino in Las Vegas on Friday, July 12, 2019. Brett Le Blanc/Las Vegas Review-Journal 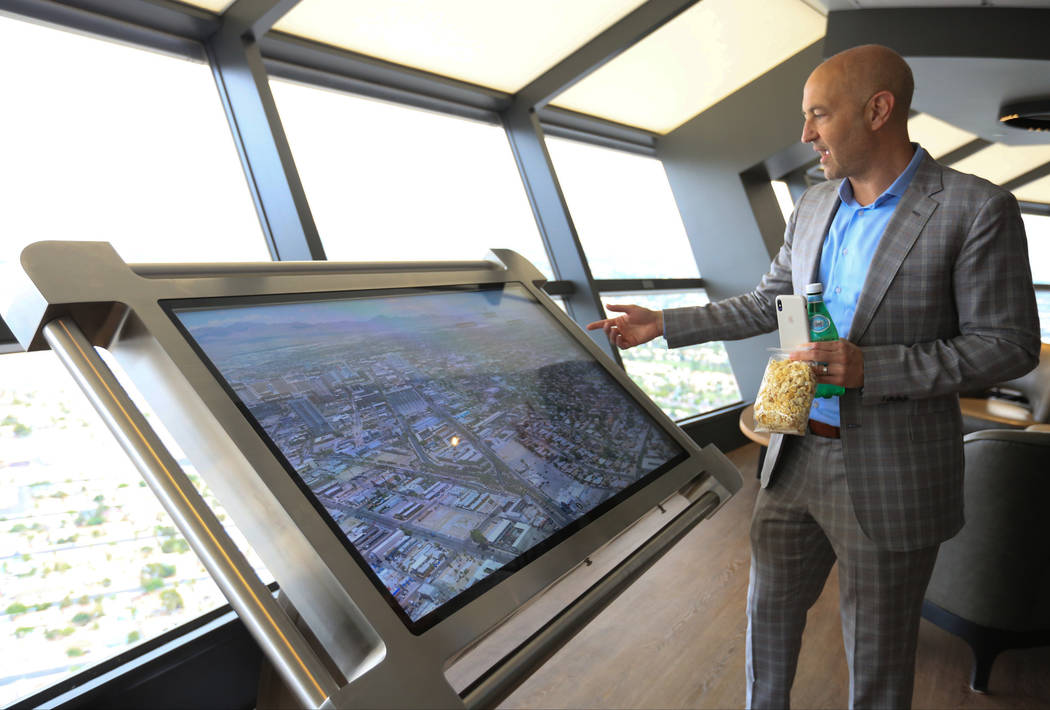 Brad Goldberg, senior vice president of marketing and entertainment for Golden Entertainment, shows off an interactive monitor that shows guests landmarks around the valley on the observation deck of The STRAT hotel-casino in Las Vegas on Friday, July 12, 2019. Brett Le Blanc/Las Vegas Review-Journal 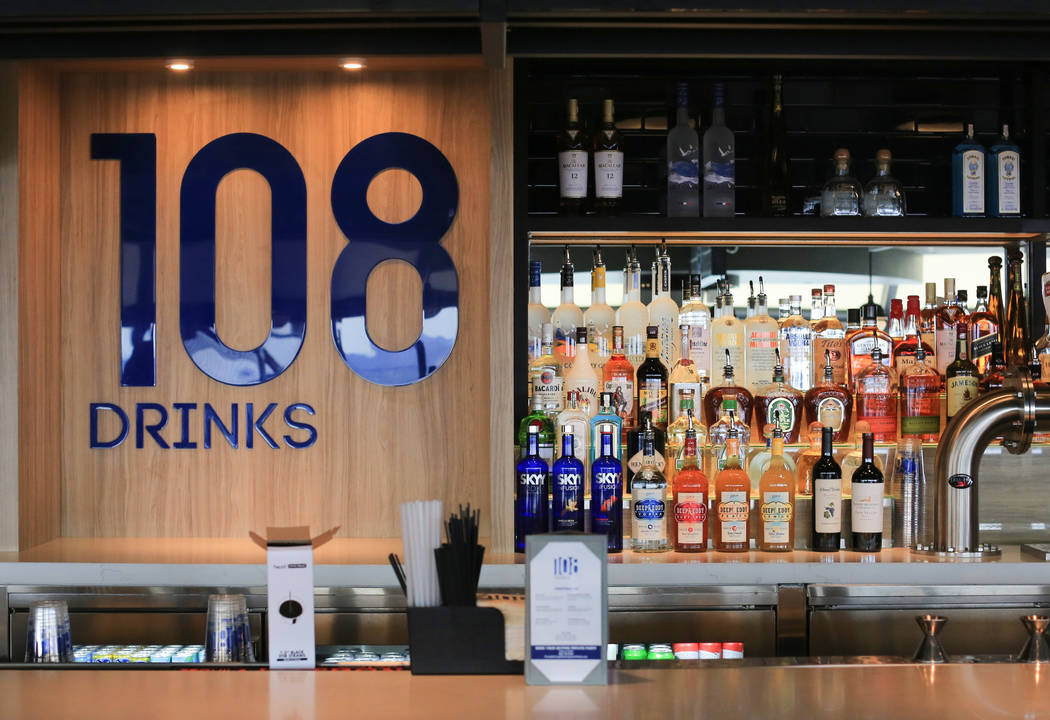 108 Drinks, a new bar on the observation deck of The STRAT hotel-casino, in Las Vegas on Friday, July 12, 2019. Brett Le Blanc/Las Vegas Review-Journal 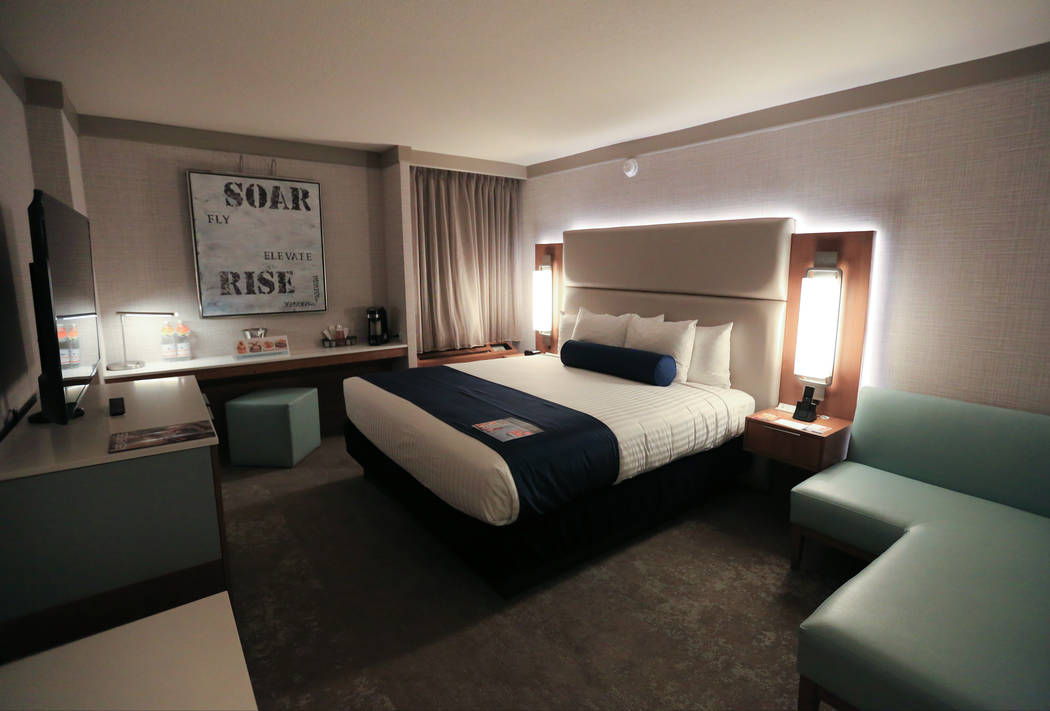 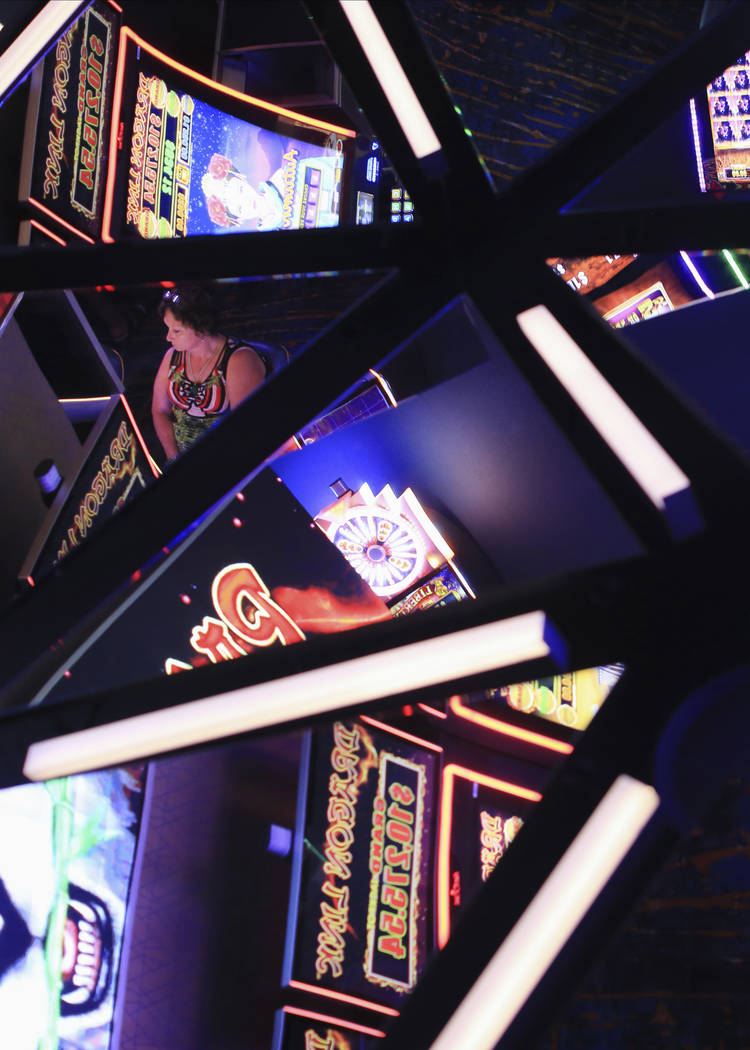 Slot machines are reflected in the ceiling of the Link Slot Lounge, a new gaming area at The STRAT hotel-casino in Las Vegas on Friday, July 12, 2019. Brett Le Blanc/Las Vegas Review-Journal 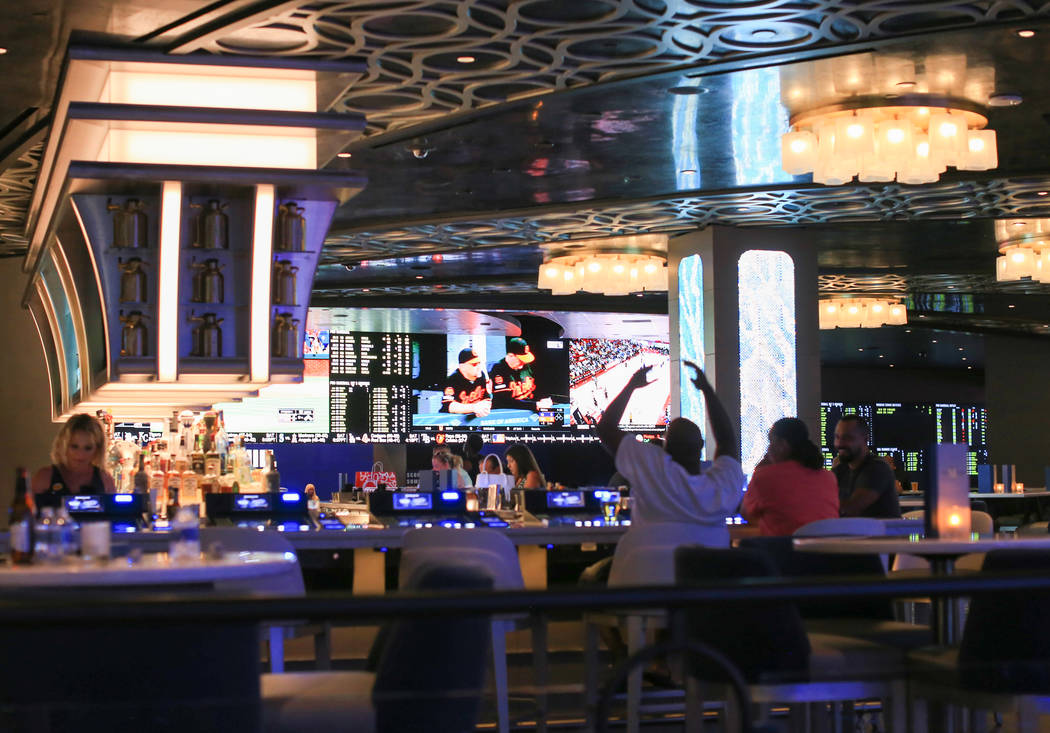 Walking into The STRAT’s casino is like seeing a before-and-after photo come to life.

To the right is a dimly lit casino floor with dated signage and decor. But as visitors move toward the front entrance, they suddenly find themselves in the midst of brighter lights, modern ceiling decorations and new slot machines.

Slot machines are reflected in the ceiling of the Link Slot Lounge, a new gaming area at The STRAT hotel casino in Las Vegas on Friday, July 12, 2019. Brett Le Blanc/Las Vegas Review-Journal

We think the timing of The STRAT renovations will coincide with the shift of energy back towards this side of the Strip.

Analysts say the $140 million renovation project at The STRAT, formerly known as the Stratosphere, could help the hotel-casino compete on the evolving northern part of the Strip. Resorts World Las Vegas, about one mile south of The STRAT, is set to open next year. Even closer are Sahara Las Vegas, which is undergoing a multimillion-dollar renovation, and Drew Las Vegas, set to open in 2022.

“We think the timing of The STRAT renovations will coincide with the shift of energy back towards this side of the Strip,” said Macquarie hospitality analyst Chad Beynon.

Diners enjoy a meal at the Strat Cafe, a new eatery opened as part of renovations to The STRAT hotel casino in Las Vegas on Friday, July 12, 2019. Brett Le Blanc/Las Vegas Review-Journal

The STRAT had done minor renovations over the years, but it was “nothing significant” — some new carpeting here, a minor refresh with paint there — said Brad Goldberg, senior vice president of marketing and entertainment for Golden Entertainment, which acquired the property in 2017.

Aside from a certain room type being remodeled about five years ago, “the last significant renovation, I couldn’t tell you,” Goldberg said.

The current renovations will “create an environment guests want to explore a little more, and experience more at the property as opposed to staying here and then venturing out,” he said. “People are now sticking around.”

Goldberg said guests can spend time trying out an Aristocrat game at the new Link Slot Lounge, enjoy Froot Loops-flavored ice cream on the 108th floor or watch friends do a controlled free fall from the updated SkyJump experience.

Brent Pirosch, director of gaming consulting for CBRE’s Global Gaming Group, said The STRAT’s renovations are part of a “defensive spending” trend on the Strip over the past few years to stay competitive and prepare for new competition.

On the north end of the Strip, The STRAT, Sahara, Drew Las Vegas and Resorts World all have to appeal to a broad customer base, but they are differentiating themselves on price points and themes.

Beynon described The STRAT’s average customer as a younger, generally foreign visitor who is exploring Las Vegas for the first time — much different from the target audiences of nearby properties.

The 1,600-room Sahara — known as SLS Las Vegas until its recent renaming —is focusing more on a quality niche than targeting a specific age demographic.

“The new SAHARA will cater to a discerning clientele that is looking for a more vibrant, boutique Strip experience,” company spokesman Christopher Abraham said via email. “Our room rate will be competitive with other 4 Diamond, 4 Star resorts in the market. The demographic, obviously, will vary by season and events in town.”

The Drew is slated to open in the second quarter of 2022. The 67-story hotel-casino is expected to include 3,780 rooms, as well as retail, nightlife and more than 550,000 square feet of convention and meeting space.

A Drew spokeswoman was not able to comment on the resort’s target demographic, but Beynon said he expects the property to focus on a more affluent, higher-income customer than The STRAT.

A newly renovated sports book can be seen from the a Taphouse bar at The STRAT hotel casino in Las Vegas on Friday, July 12, 2019. Brett Le Blanc/Las Vegas Review-Journal

A Resorts World representative said the brand’s international markets form a customer base for the upcoming $4 billion, 3,400-room hotel-casino in Las Vegas.

Malaysian-based Genting Group, the owner of the Resorts World brand, has established properties in Malaysia, Singapore and the United Kingdom.

“We expect our demographic to reflect in good part a largely domestic and regional visitor,” the representative said via email.

Beynon said Resorts World’s operations are unlikely to hurt The STRAT, given the difference in customers.

We believe an improved product will be able to command a much (stronger) rate from customers.

Unlike other properties, Beynon said, The STRAT has a low share of business travelers.

Pirosch said each property will be looking to capitalize on others’ success, and each point of differentiation will complement everybody’s offerings.

The new developments on the north side of the Strip will be a boon for The STRAT, said Goldberg.

“A rising tide lifts all ships,” he said. “Those guests will want to come and visit what’s going on at The STRAT.”

Following the property’s purchase by Golden Entertainment, The STRAT began its renovations in June of last year by introducing a new baccarat gaming pit.

Since then, it has unveiled an updated sportsbook, a new gaming lounge launched in partnership with slot machine manufacturer Aristocrat and about 350 remodeled rooms.

The property expects to finish updating another 120 rooms by Labor Day weekend.

Food and drinks have also been a major focus of the renovations. The Top of the World restaurant has been remodeled and features a new menu. The property has added the BLVD &MAIN Taphouse, the View Lounge, the STRAT Café restaurant and the 108 Eats restaurant by local chef James Trees.

Goldberg wasn’t able to estimate how far along the remodeling work is, but he expects to continue renovations into 2021. As of March 31, Golden Entertainment had invested $38 million in the renovations, with an additional $39 million budgeted for the rest of 2019.

With The STRAT’s room rates often starting in the $30 range — half that of many of its peers on the Strip — Beynon said the renovations will draw in more customers to the property and its nearly 2,500 rooms. He expects to see a strong return on the investment.

“With Golden’s database of local customers, they will have the ability to cross-sell their products to local loyalists, particularly regarding their food and beverage offerings,” he said via email.

Union Gaming analyst John DeCree said the renovations are “not only upgrading the room and casino product, but transforming the property into a full resort destination that can better compete with the rest of the Strip.”

According to Golden’s earning call in May, revenue at the Top of the World restaurant was up 13 percent in the first quarter, while the 108 Eats restaurant saw a 14 percent revenue jump, and the Taphouse made 2.5 times more revenue than prior venues in its first full month of operations.

The Las Vegas-based company, which owns 10 casinos and more than 60 pubs and taverns, announced in its first quarter earnings call that it hopes to capture an additional $20 spend per person after The STRAT renovations are complete. The $140 million project is expected to be wrapped up in 2021.