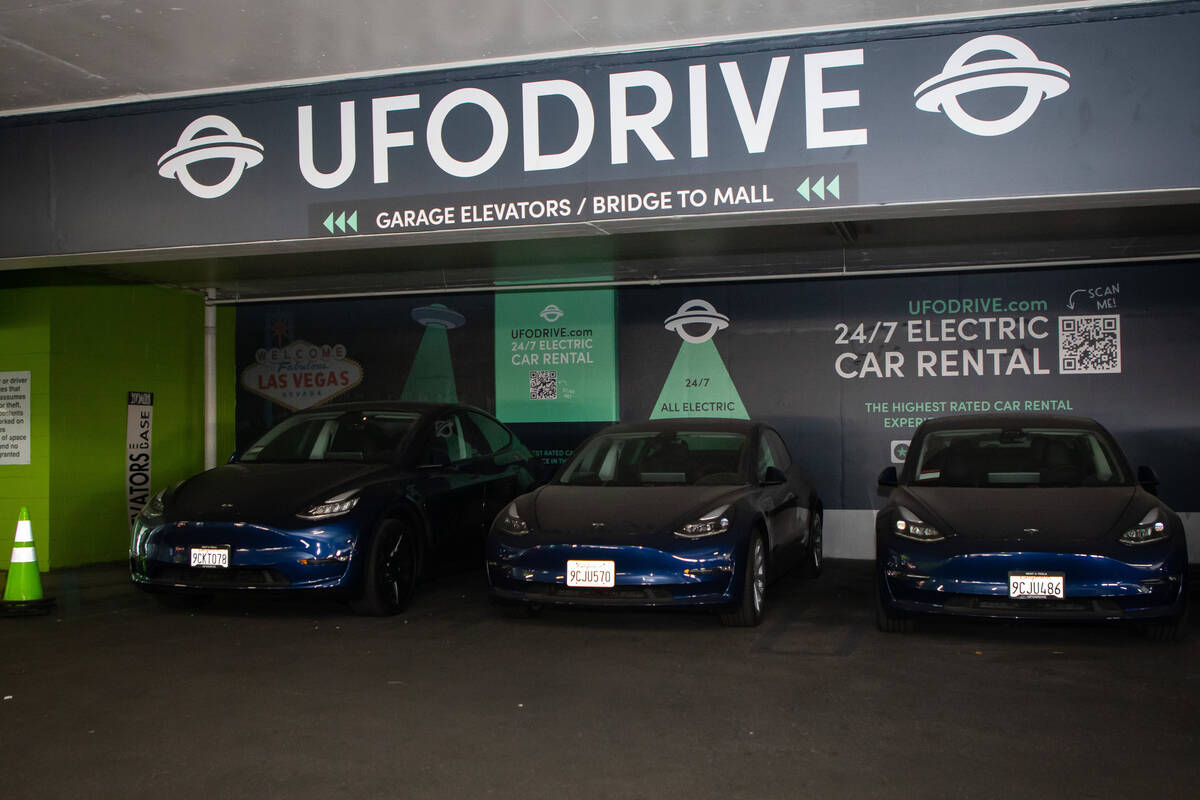 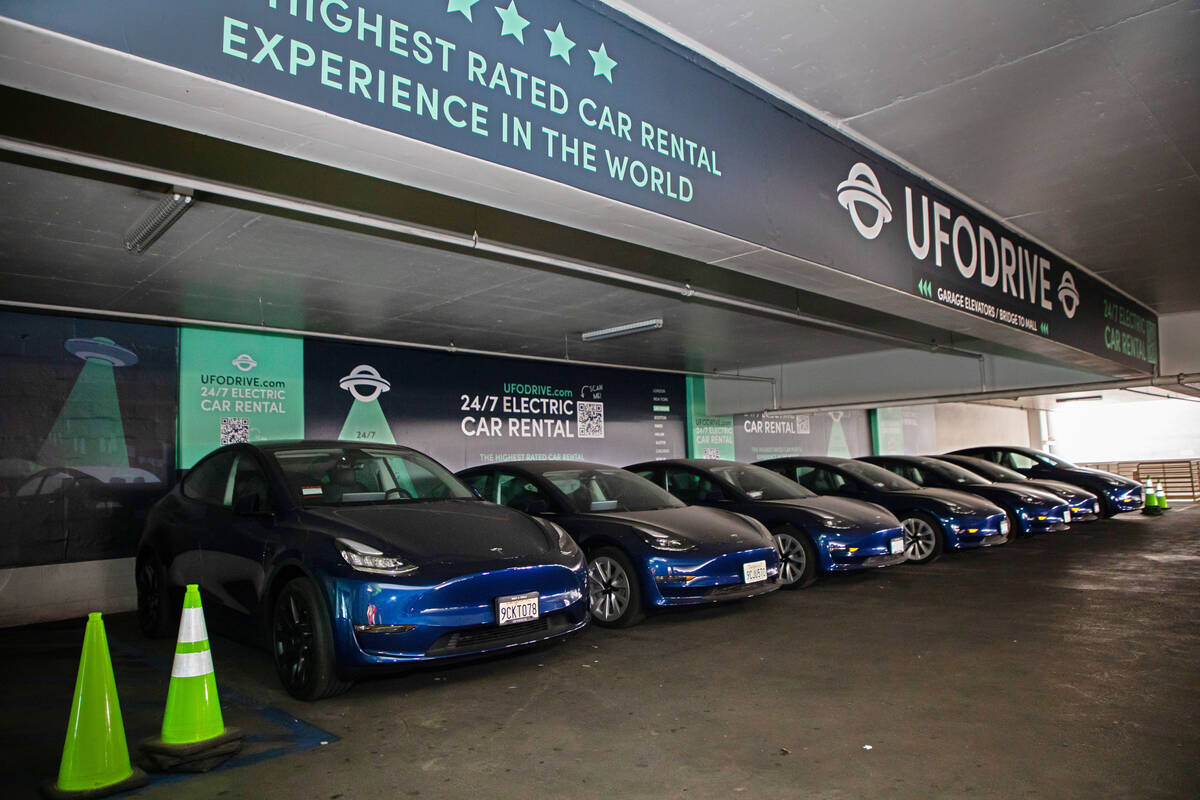 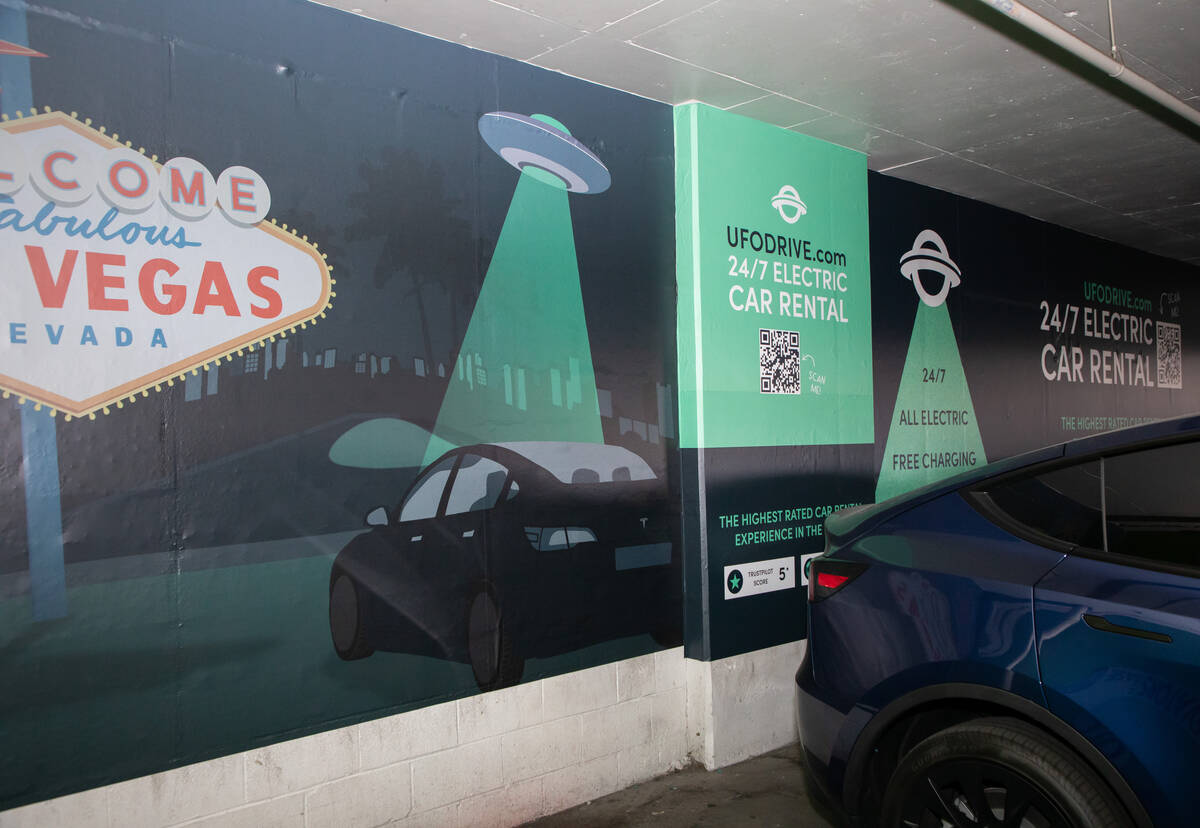 Las Vegans and tourists alike will have a new electric car rental option on the Strip that won’t require interacting with agents.

UFODrive, a Europe-based car rental company that only offers electric vehicles, launched its operations Thursday on the fifth floor of Showcase mall’s parking garage on the Strip.

The company will not have staff in Las Vegas — which helps keep costs down — and customers will be directed to handle every part of the rental experience through its mobile app, said Aidan McClean, CEO of UFODrive.

“We wanted to deliver a 21st century digital experience, within two minutes you arrive and drive,” he said.

The company’s app will also function as a car’s key during the rental period, said Conor Lee, U.S. launch manager for UFODrive. He noted operations such as cleaning and charging cars will be handled by third-party companies.

Only seven Teslas are available for rent, Lee said, but the company plans on expanding its fleet up to 15 Teslas by the end of the month.

Las Vegas is no stranger to EV-focused rental companies. In November, Halo.Car expanded its remotely-piloted EV rentals from just the downtown Las Vegas area to across the Las Vegas Valley, and in April, EVolve Rentals established operations at Resorts World, offering Tesla rentals.

Not just a rental company

McClean started UFODrive in 2018 because he was frustrated with the experience of renting a car, and he wanted to promote the use of EVs as a better alternative to gas-powered cars.

In February, UFODrive raised $19 million in a Series A round led by car rental giant Hertz and New York private equity firm Certares.

EV rentals isn’t UFODrive’s only business. It also offers white label services to other car rental companies such as Hertz, which uses the firm’s software and technology for its growing fleet of EVs. McClean said Hertz is one of 16 car companies that uses UFODrive’s software.

“The transition to fully contactless, fully digital and fully electric — it’s not just a nice to have — it’s going to be a must,” he said. “Because of the operating margins we really enjoy, the other rental companies are going to have to get to that level, ultimately.”

Las Vegas is the Luxembourg company’s fifth U.S. location and 26th worldwide. Customers in the U.S. can only rent a Tesla, though it may add additional EV brands in the future.

“We were trying to pick all major cities across the U.S. … and really kind of progressive, fast growing cities with a tech edge to them,” he said. “We think (Las Vegas) is perfect for our product.”

It plans to expand to another 10 U.S. cities this month and operate a total of 30 locations by the end of 2023.