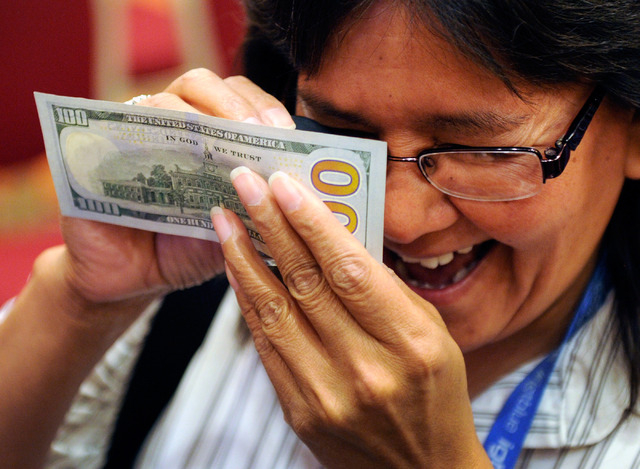 Donna Perkins from the Red Lake Gaming in Minnesota examines a new US $100. bill during G2E at the Sands Expo and Convention Center on Wednesday, Sept. 25, 2013. The newly redesigned note containing a number of improved security features will be introduced into circulation next month. (David Becker/Las Vegas Review-Journal)

The redesigned $100 bills will be circulated on Oct. 8. (COURTESY) 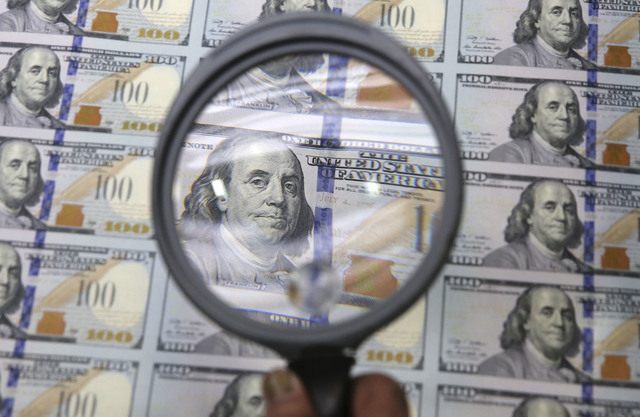 A sheet of uncut $100 bills is inspected during the printing process at the Bureau of Engraving and Printing Western Currency Facility in Fort Worth, Texas, Tuesday, Sept. 24, 2013. The federal printing facility is making the new-look colorful bills that include new security features in advance of the Oct. 8 circulation date. (AP Photo/LM Otero) 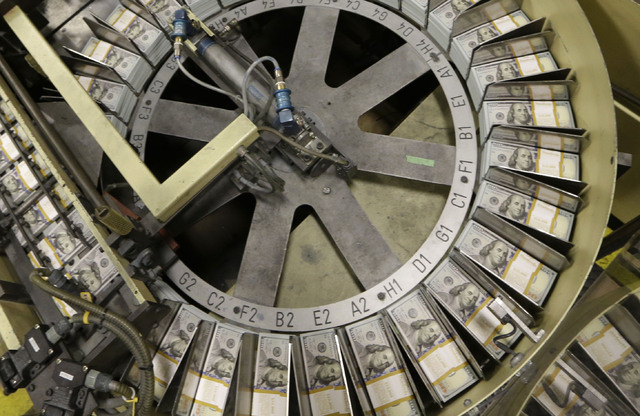 Just cut stacks of $100 bills make their way down the line at the Bureau of Engraving and Printing Western Currency Facility in Fort Worth, Texas, Tuesday, Sept. 24, 2013. (AP Photo/LM Otero) 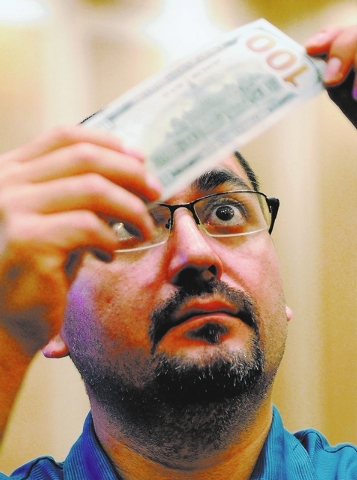 Gary Lussier from the Red Lake Gaming in Minnesota examines a new US $100. bill during G2E at the Sands Expo and Convention Center on Wednesday, Sept. 25, 2013. The newly redesigned note containing a number of improved security features will be introduced into circulation next month. (David Becker/Las Vegas Review-Journal) 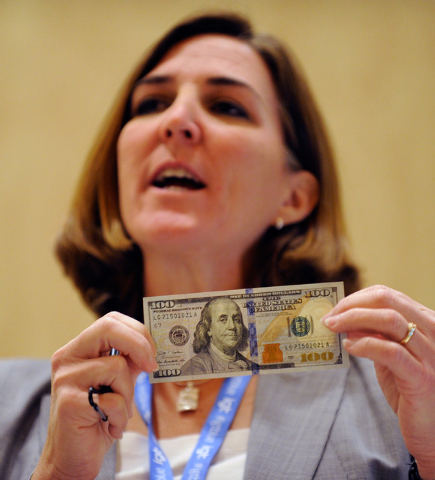 Lorelei Pagano, assistant director of the Division of Reserve Bank Operation and Payment Systems, displays a new US $100. bill during G2E at the Sands Expo and Convention Center on Wednesday, Sept. 25, 2013. The newly redesigned note containing a number of improved security features will be introduced into circulation next month. (David Becker/Las Vegas Review-Journal) 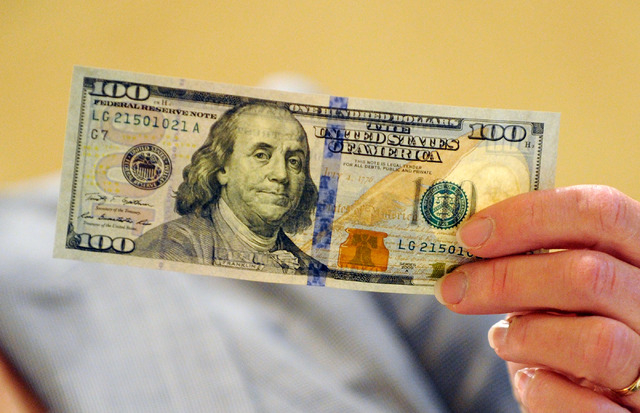 Lorelei Pagano, assistant director of the Division of Reserve Bank Operation and Payment Systems, displays a new US $100. bill during G2E at the Sands Expo and Convention Center on Wednesday, Sept. 25, 2013. The newly redesigned note containing a number of improved security features will be introduced into circulation next month. (David Becker/Las Vegas Review-Journal)

The folks who distribute America’s money chose a modest Las Vegas ballroom and used a generic slide presentation on Wednesday to introduce a redesigned $100 bill to the gaming industry.

The new high-tech makeover is part of an effort to stay ahead of counterfeiters as technology becomes more sophisticated and more dollars flow overseas.

The redesigned notes will be circulated on Oct. 8. Benjamin Franklin is still on the $100 bill, but to thwart counterfeiters, he has been joined by a disappearing Liberty Bell in an inkwell and a bright blue security ribbon down the center of the note.

The bright blue security ribbon is composed of thousands of tiny lenses that magnify tiny Liberty Bells and the numeral 100. Move the bill, and the objects move in a different direction, according to an assistant director with the Federal Reserve in Washington, D.C.

“There is $1.1 trillion of currency in circulation,” Lorelei Pagano, assistant director of Federal Reserve Bank operations and payment systems, told dozens of gaming industry executives during an hourlong presentation at Global Gaming Expo at the Sands Expo and Convention Center in Las Vegas.

“There is about $9 billion in $100 notes in circulation,” Pagano said. “That’s a lot of currency to replace in the next couple of years. We will not recall any of the currency out there. We don’t do that. ”

Pagano said the $100 bill, also known as the C-note, is the last bill to undergo an extensive redesign. It costs the Federal Reserve 12.6 cents for each redesigned $100 bill, she said.

The redesigned $100 bill had been expected to go into circulation in late 2008, but its introduction was delayed while the federal government refined security features.

Some executives in the gaming business welcomed the new currency.

“We’ve been working with the Federal Reserve for several years,” said Tom Nieman, vice president of global marketing for Las Vegas-based JCM Global. “They’ve come to us to get an idea of where our technology is going.”

JCM Global is a manufacturer of bill validator systems for the gaming business.

“It is not our job to accept everything, but to validate it,” Nieman said. “Our iVIZON bill validator captures 100 percent of the image of the note and works off that to validate the bill. We’ve been very successful.”

Pagano said about a half to two-thirds of all currency circulates outside of the United States.

Other security features of the new $100 bill include a more defined portrait watermark, raised printing and a larger gold 100 on the back of the note. The embedded security thread has been enlarged to 2.6 millimeters from 1.6 millimeters, while the 100 numeral on the lower right side of the bill can change from copper to green ink.

She said the bills are a blend of 75 percent cotton and 25 percent linen. Pagano said the feel of the new bill should help casino employees tell whether it’s counterfeit.

While the new $100 notes will be distributed in a couple of weeks, the Federal Reserve and U.S. Secret Service have been working with gaming manufacturers and casinos to prepare them for what they can expect from the new currency.

“We’ve been working with equipment manufacturers for a long time to make sure they’re ready for the new notes,” Pagano said. “The gaming community is a very important community for us because of how much currency is passed through.”

Pagano said the goal was that on the “day of the issue, you can go to a casino and use it.”