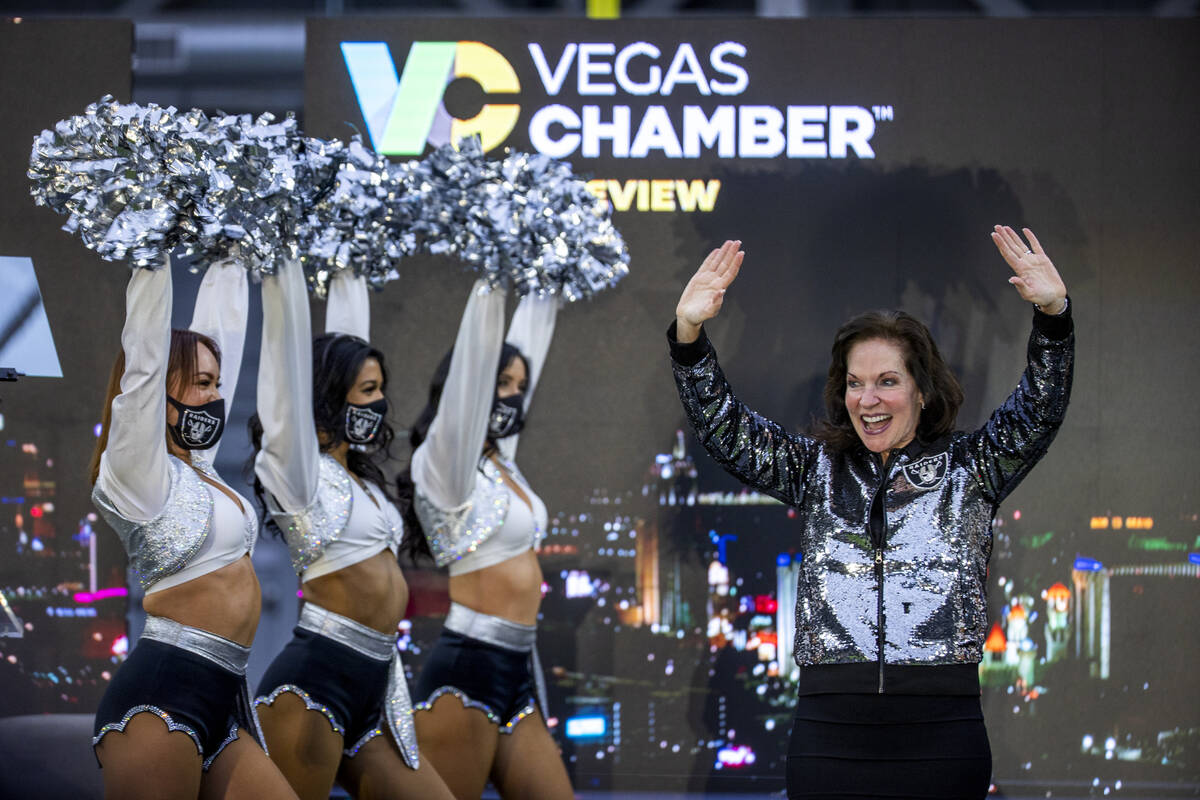 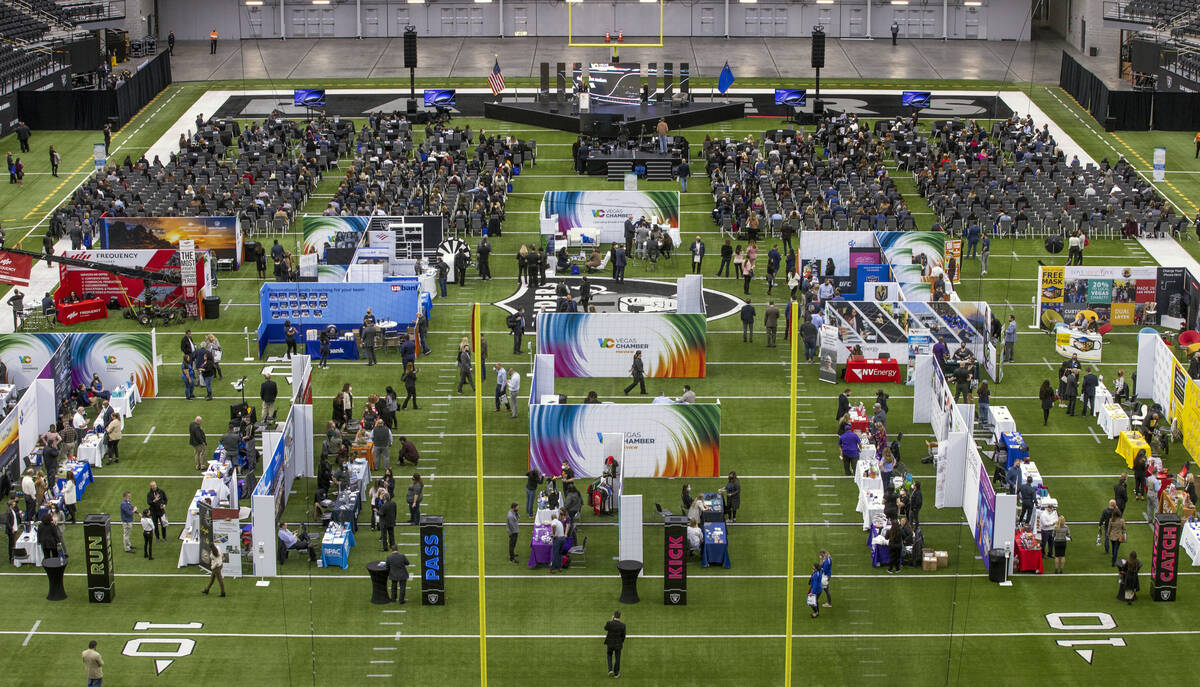 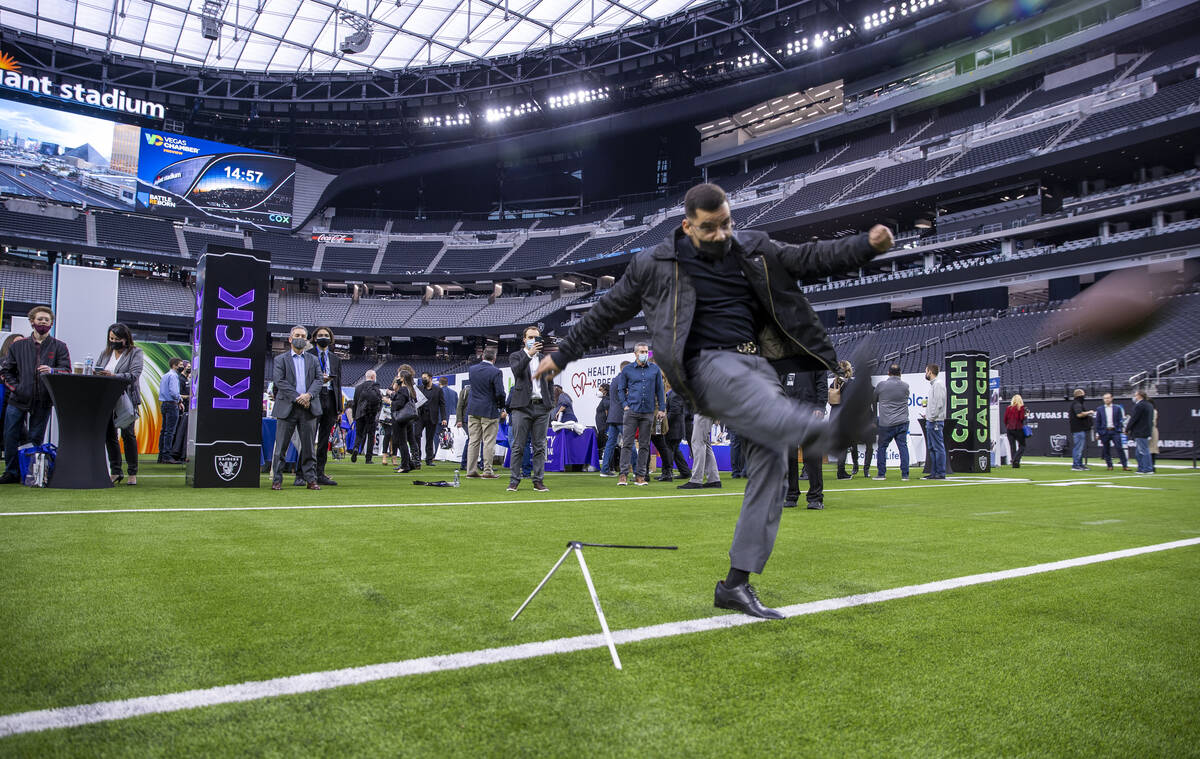 Jesus Valdovinos with Bank of Nevada kicks a football during a run, pass and kick event during Preview Las Vegas sponsored by the Vegas Chamber at Allegiant Stadium on Tuesday, Jan. 18, 2022, in Las Vegas. (L.E. Baskow/Las Vegas Review-Journal) @Left_Eye_Images 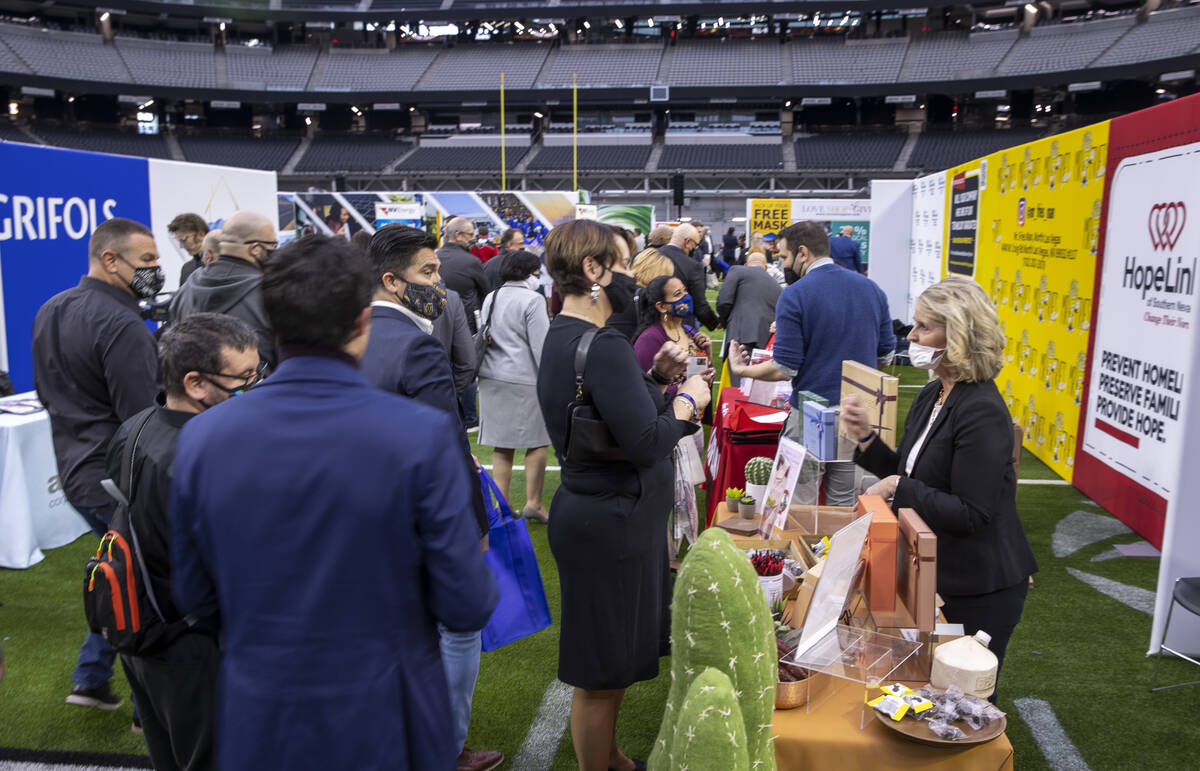 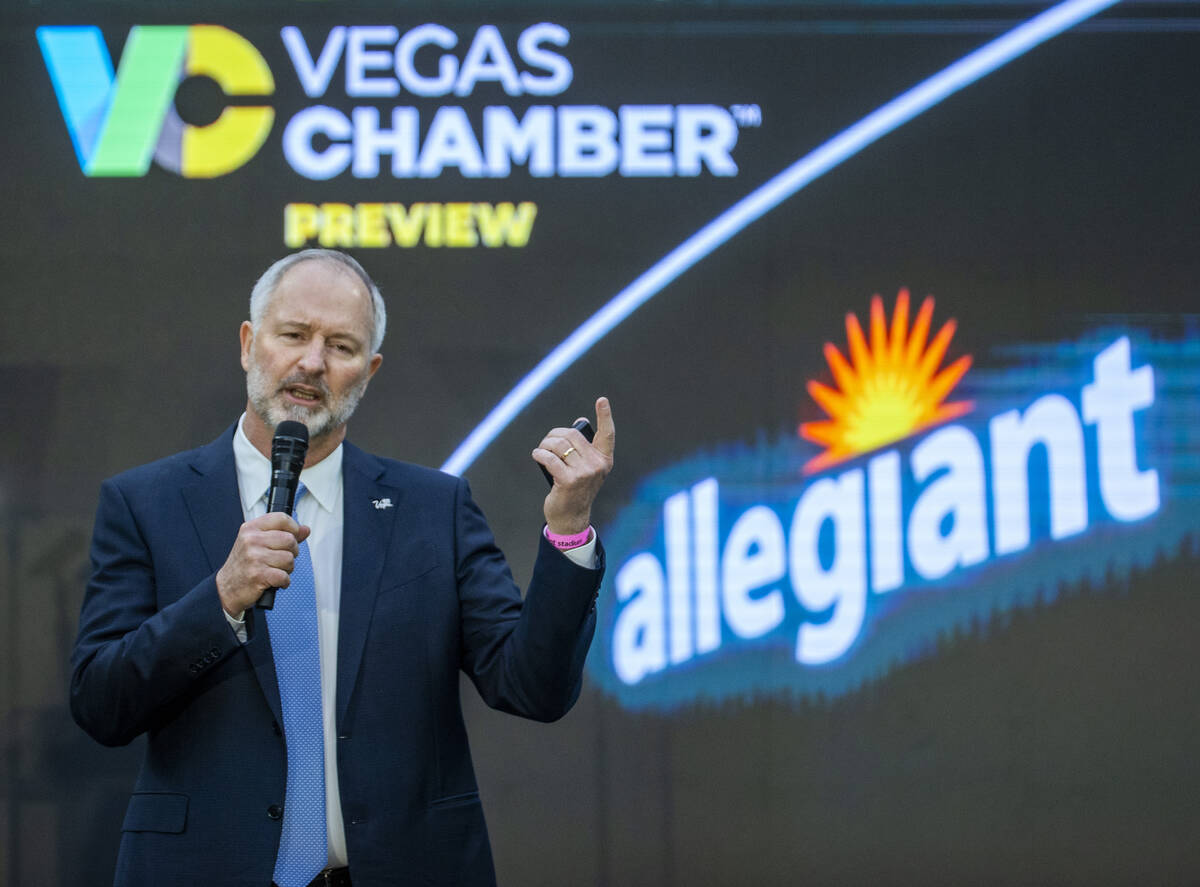 LVCVA President and CEO Steve Hill talks about how the hospitality industry is changing in the city and what’s new during Preview Las Vegas sponsored by the Vegas Chamber at Allegiant Stadium on Tuesday, Jan. 18, 2022, in Las Vegas. (L.E. Baskow/Las Vegas Review-Journal) @Left_Eye_Images

Allegiant Stadium turned out to be a perfect place to hold the Vegas Chamber’s Preview Las Vegas event.

Las Vegas Convention and Visitors Authority President and CEO Steve Hill and R&R Partners principal Billy Vassiliadis told more than 1,000 Preview attendees Tuesday that the $2 billion stadium exemplifies one of the reasons it was built with the help of $750 million in public money from hotel room taxes.

The public investment, they said, is paying off.

Hill and Vassiliadis talked tourism in the closing session of the Vegas Chamber’s largest annual networking and forecasting event.

They said the stadium already has done what supporters of its construction thought it would, from bringing in thousands of fans to NFL games and to sold-out concert performances to soon hosting the NFL’s biggest game, the Super Bowl, in 2024.

Tuesday, the indoor sports venue showed its versatility, hosting a trade show on its artificial turf with a stage near the field’s goal line.

It set the stage for Hill and Vassiliadis to share how far the city’s relationship with the NFL has come and what opportunities await Southern Nevada when international flights to and from Harry Reid International Airport return once the pandemic cools.

“I know this is Preview, but I have to tell you that I’m a believer that the past is prologue,” Vassiliadis said.

He then rattled through some of the accomplishments that Las Vegas has made over the years in the face of adversity.

“Post-9/11, we were the first airport to be certified to be reopened. Our occupancy started to climb to the highest in the country,” he said. “The community came together during the tragedy of 1 October and we recovered in record time. Then came the recession. And you look at this pandemic and at the amount of work that’s been done during it. We’ve opened three new properties (Circa, Virgin Hotels Las Vegas and Resorts World Las Vegas). Look at the Convention Center opening in the middle of it and its underground transportation system. The fact that we always bounce back stronger.”

“It’s creativity. It’s risk-taking. It’s daring. It’s innovative. It’s bold,” he said. “We don’t back down, whether it was Sheldon Adelson deciding to put a convention center on the Strip (The Venetian Expo) when everybody thought he was crazy. Crazy! You’re never going to make money with that (critics said). They thought that putting a volcano (The Mirage) on the Strip at a cost of a billion dollars would be a gross failure.

“A billion dollars is the ante now to build on the Las Vegas Strip,” Vassiliadis said.

“You look at the folks who said, ‘Let’s build a stadium. Let’s get an NFL team. Let’s get a hockey team here. You look at the different businesses that opened up with confidence, whether it’s a data center or warehousing and transferring and retail and interesting restaurants, folks here that always thought they could build the dream, dreamt it and did it.”

The atmosphere in Las Vegas today was the way it was in the late 1990s, Vassiliadis said.

“We reinvented this destination three or four times in the ’90s,” he said. “We’re in the middle of a reinvention right now that will make the ’90s feel like it was just OK.”

And what does the future hold? Hill expects that international travelers will embrace Las Vegas as “the greatest arena on Earth” as much as domestic travelers.

After his session, Hill said he fully expects the worldwide popularity of soccer will be one of the next phases of growth when international travel rebounds. Because of space limitations at Allegiant Stadium, he doesn’t expect Las Vegas would ever host a World Cup soccer event. But even international “friendlies” could draw huge crowds, as evidenced by the 2021 Gold Cup final between Mexico and the United States selling out the stadium in 90 minutes.

Earlier, attendees got a boost from a Las Vegas economist and from Gov. Steve Sisolak.

Brian Gordon, a principal with Applied Analysis, summarized the rocky road the local economy has been on since the beginning of the COVID-19 pandemic in 2020 but offered a ray of optimism with trends he anticipates in 2022.

Gordon pointed to increased spending by domestic tourists and an estimated $21.9 billion in local construction projects underway in Southern Nevada as reasons to be optimistic about the immediate future of the local economy.

He also said local residents joined peers nationwide who have discovered new personal wealth through investments in the stock market and real estate.

Among the construction projects are $9.9 billion currently underway — the Fontainebleau resort, the MSG Sphere at The Venetian, Henderson’s Dollar Loan Center and the UNLV Kirk Kerkorian School of Medicine — and $11.9 billion in projects in the planning stages.

The higher cost of goods has been brought upon by supply-chain issues, Gordon said. He also noted that while personal wealth has grown thanks to the rising value of homes, it’s a double-edged sword because many homeowners can no longer afford to upgrade.

Regional growth has occurred as a result of the inmigration of around 50,000 new residents, most of them from the West. But at the same time, the job market has struggled and the pandemic has made thousands of jobs disappear, especially in the leisure and hospitality categories.

Sisolak said Nevada is now leading the nation in economic growth, thanks to some of the recruitment efforts of the Las Vegas Global Economic Alliance.

“In some ways, it seems time has stood still,” Sisolak said of the period since the pandemic began in early 2020. “But the future is as bright as it has ever been.”

The Las Vegas Review-Journal is a sponsor of Preview Las Vegas.

The Review-Journal is owned by the family of Dr. Miriam Adelson, widow of Sheldon Adelson and the majority shareholder of Las Vegas Sands Corp., which operates The Venetian Expo. The MSG Sphere is a project by Madison Square Garden and Las Vegas Sands.