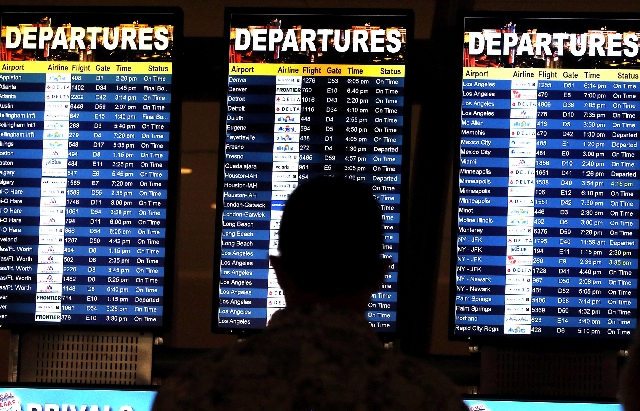 A man studies the flight board inside Terminal 3 at McCarran International Airport. Reports on www.flightstats.com indicated moderate delays at 2 p.m. Tuesday for Las Vegas passengers.

WASHINGTON — A day after flight delays plagued much of the nation, air travel was smoother Tuesday, but the government warned passengers that the situation could change by the hour as thousands of air traffic controllers are forced to take furloughs because of budget cuts.

Airlines and members of Congress urged the Federal Aviation Administration to find other ways to reduce spending. Airlines are worried about the long-term costs that late flights will have on their budgets and on passengers.

“I just can’t imagine this stays in place for an extended period of time. It’s just such terrible policy,” US Airways CEO Doug Parker said. “We can handle it for a little while, but it can’t continue.”

About 400 delays piled up Sunday and 1,200 on Monday that were linked to the furloughs. The FAA did not predict the number of delayed flights Tuesday but warned of possible problems in New York, Los Angeles, Dallas and Las Vegas.

The numbers seemed to bear out those predictions, at least locally. About 100 flights leaving McCarran International Airport arrived at their destinations late on Tuesday, according to the data service flightstats.com. That matches Monday’s total.

Out of the delays, 16 ran more than an hour and two surpassed two hours, including the six-hour, 25-minute late takeoff of a Hawaiian Airlines flight to Honolulu. Flightstats does not give the reasons for missing the schedule.

In one instance, a 7 a.m. Air Canada flight pushed from its McCarran gate two minutes early but reached Vancouver, British Columbia — where sequestration is not an issue — 21 minutes late. In many other cases, the pilots managed to make up time in the air; a 9:09 a.m. Delta flight left 38 minutes late but reached Minneapolis only 17 minutes late.

As was true Monday, the delays were scattered in the morning and evening hours. Nearly half occurred between 11 a.m. and 4 p.m.

The delays are the most visible effect yet of Congress and the White House’s failure to agree on a long-term deficit-reduction plan. Transportation Secretary Ray LaHood said no one should be surprised by the problem, noting that he warned about it two months ago.

His solution: Blame Congress for the larger budget cuts that affected all parts of government, including a $600 million hit to the FAA.

“This has nothing to do with politics,” LaHood said. “This is very bad policy that Congress passed, and they should fix it.”

Critics of the FAA insist the agency could reduce its budget in other spots that would not inconvenience travelers.

Sens. Jay Rockefeller, a West Virginia Democrat, and John Thune, a Republican from South Dakota, sent a letter to LaHood on Monday accusing the FAA of being “slow and disturbingly limited” in response to their questions. They suggested the FAA could divert money from other accounts, such as those devoted to research, commercial space transportation and modernization of the air traffic control computers.

Others in Congress urged the Obama administration to postpone furloughs for at least 30 days.

In the past five years, the FAA’s operating budget has grown by 10.4 percent while the number of domestic commercial flights has fallen 13 percent.

“There’s no cause for this. It’s a cheap political stunt,” said Michael Boyd, an aviation consultant who does work for the major airlines.

The FAA says the numbers aren’t so clear cut. In that time, the government signed a new, more expensive contract with air traffic controllers, added 400 aviation safety inspectors and beefed up its payroll to deploy a new air traffic control computer system.

Given the budget cuts, FAA officials say they have no choice but to furlough all 47,000 agency employees — including nearly 15,000 controllers — because salaries make up 70 percent of the agency’s budget. Each employee will lose one day of work every two weeks.

Planes will have to take off and land less frequently, so as not to overload the controllers on duty.

Travel has not yet reached the levels the FAA warned about where some airports — such as those in Atlanta, New York and Chicago — could see delays of more than three hours. Mother Nature has so far cooperated.

“Bad weather would make this much worse,” said Parker, the US Airways CEO.

There also is the possibility that passengers will be scared away by fears over delays. Many families are planning summer vacations and might choose a road trip instead.

If the FAA staffing shortage persists into the summer, airlines will have less flexibility to ease passengers’ pain.

For instance, Delta Air Lines canceled about 90 flights Monday because of worries about delays. Just about every passenger was rebooked on another Delta flight within a couple of hours, said Ed Bastian, Delta’s president.

In the busy summer travel months, airlines might not have enough empty seats to accommodate passengers from canceled flights.

“This is just the beginning of what promises to be a huge economic disruption,” the National Air Traffic Controllers Association warned in a statement Tuesday. “This is no way to run the world’s safest, most efficient national airspace system. Controllers continue to do their best every day to keep the system running. It’s time policymakers show the same amount of effort and dedication.”

The federal budget cuts also are eating into US Airways’ bottom line, with defense company employees cutting their flight budgets by 20 percent in the past month.

US Airways operates a hub at Washington National Airport, and government business accounted for 3 percent of its revenue last year. Government revenue dropped 37 percent in March because of the spending cuts and the timing of Easter, said the airline’s president, Scott Kirby.

“As long as the sequester stays in place, I expect that government-related demand will continue to be depressed,” he said.

Unlike Delta, US Airways didn’t cancel flights in advance.