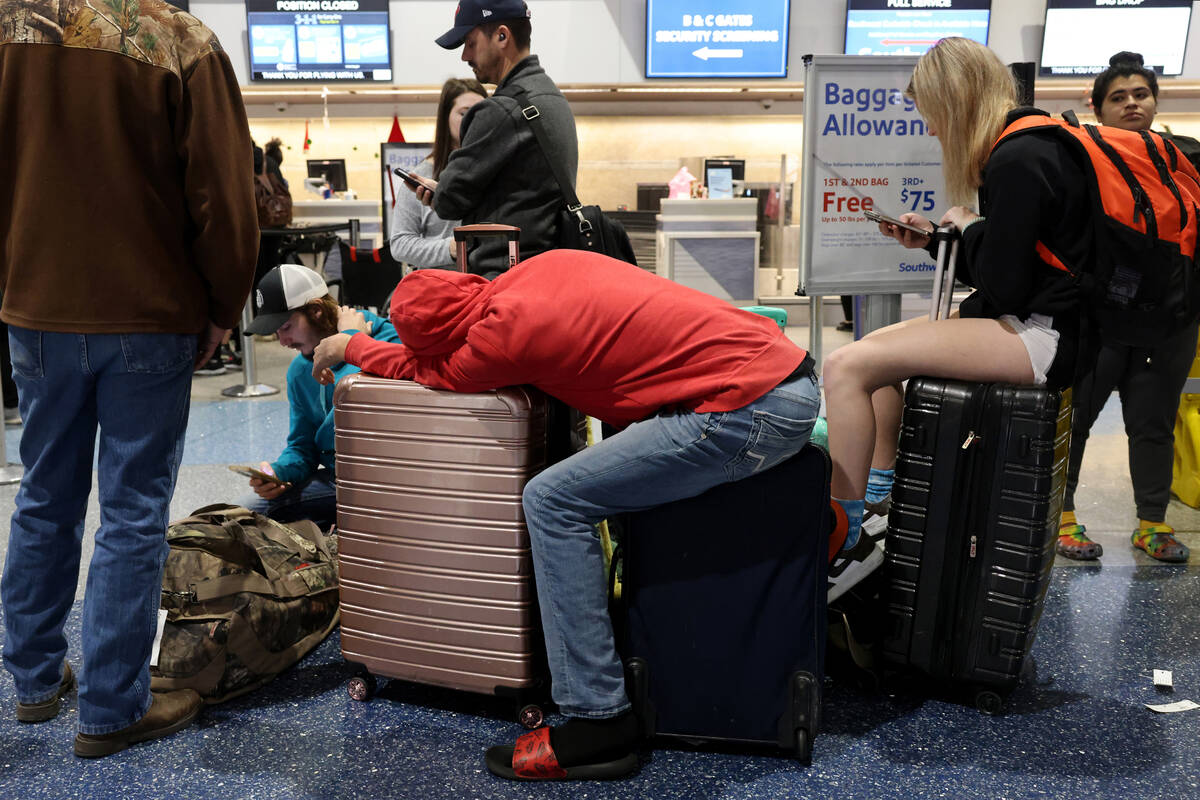 Hunter Murphy, 18, and his sister Presslie Murphy, 15, of Houston sit on luggage as they wait in line at the Southwest ticket counter in Terminal 1 at Harry Reid International Airport in Las Vegas on Tuesday, Dec. 27, 2022. (K.M. Cannon/Las Vegas Review-Journal) @KMCannonPhoto 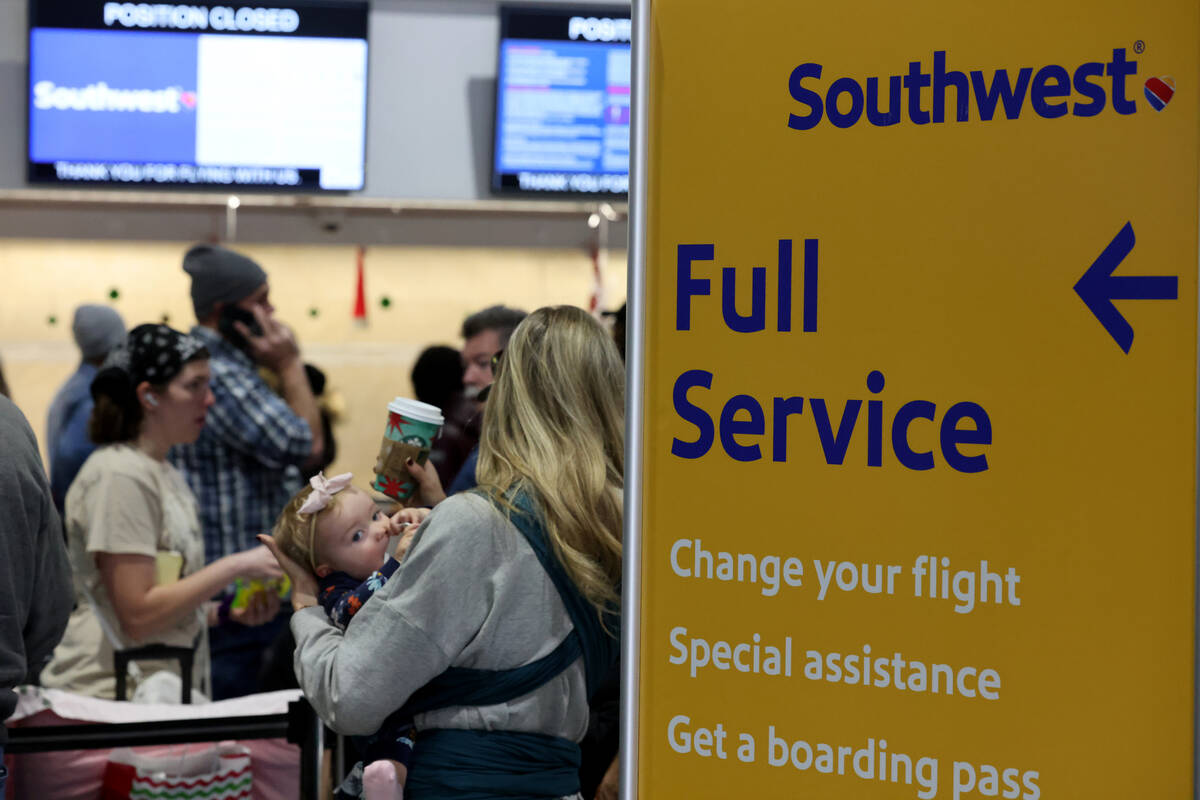 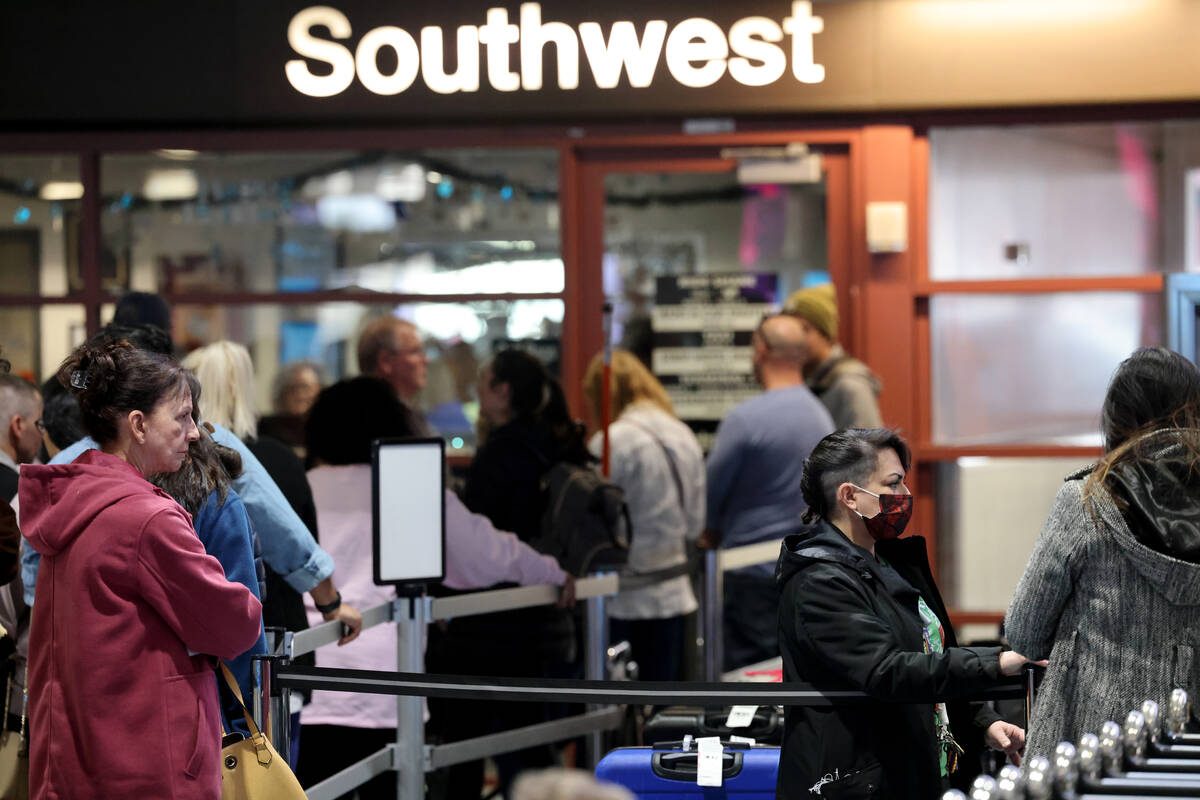 Weary travelers endured another day of widespread flight cancellations Wednesday as Southwest Airlines tried to “reset” its operations and federal officials called for the carrier to compensate its customers.

Exhausted Southwest travelers tried finding seats on other airlines or renting cars to get to their destination, but many remained stranded. The airline’s CEO said it could be next week before the flight schedule returns to normal.

Colmer’s 82-year-old aunt, Marilyn Sina, and 76-year-old uncle, Skip Sina, had been scheduled to fly from Las Vegas to Milwaukee, Wisconsin, on Christmas night, but, after five hours of delays, their Southwest flight was canceled. The Sinas booked a $660 flight on Spirit Airlines for Monday night but were still waiting for their luggage to arrive Wednesday morning.

“They had to pay for an additional night, food, another ticket,” Colmer said.

Nationwide, 2,510 Southwest flights had been canceled as of Wednesday evening, accounting for 61 percent of the airline’s total flights, according to online flight tracker FlightAware. The highest number of cancellations and delays, for at least the third consecutive day, was at Denver International Airport.

In Las Vegas, 224 flights coming into or leaving Harry Reid International Airport had been canceled as of Wednesday afternoon. FlightAware showed that nearly half of those were Southwest flights.

Travelers stranded in Las Vegas appeared to have more success finding rental cars than in some other cities. Several local rental car companies, including Enterprise, Avis and Alamo, said their number of available cars was not impacted by the airline’s problems.

At least one expert doubts the ongoing air travel turmoil will affect New Year’s Eve in Sin City, reasoning that the number of people who will be unable to get to Las Vegas will be balanced out by the number of travelers who are stuck here.

“There are going to be some visitors that may not make it to Vegas this year for New Year’s Eve,” said Brendan Bussmann, a gaming industry analyst with Las Vegas-based B Global. “There may be others stranded here because of the flightapocalypse. In the end, it will probably be a push.”

The Fremont Street Experience said it is welcoming the stranded travelers who may stay through New Year’s Eve.

“While the current airline cancellations are disappointing, we are experiencing record ticket sales for The Time of Your Life Festival and are ready to ring in 2023 on New Year’s Eve at Fremont Street Experience,” President and CEO Andrew Simon wrote in a message to the Review-Journal.

One of the many travelers left in the lurch was Theresa Lawery. She had planned to ring in the New Year at the Bruno Mars show in Las Vegas and had booked a flight from Reno for Thursday.

On Tuesday morning, Lawery started to realize her flight might not take off and on Wednesday learned that she was out $400 tickets and a trip to Las Vegas for the holiday.

“I was more sad than upset,” she wrote. “It took me months to plan this trip, and I got a loan to get that concert ticket.”

The operational meltdown started last week with cold and windy weather across the country at key Southwest airports, including Chicago and Denver. But after delays and cancellations on Thursday and Friday, Southwest’s crew scheduling software buckled under the strain, leaving the company with a hard time assigning pilots and flight attendants.

The problems escalated until Monday night when the carrier decided it needed to cut about two-thirds of its schedule over the coming days to try to “reset” the operation. Between Dec. 22 and Wednesday, the carrier canceled 13,353 flights, affecting as many as 2.3 million people during one of the busiest travel stretches of the year.

“I want everyone who is dealing with the problems we’ve been facing, whether you haven’t been able to get to where you need to go or you’re one of our heroic employees caught up in a massive effort to stabilize the airline, to know is that we’re doing everything we can to return to a normal operation,” Jordan said in the video. “And please also hear that I’m truly sorry.”

Massoni said Southwest flight attendants have to shoulder the brunt of the airline’s mistakes.

For a decade, the union has been asking the airline to update its antiquated crew scheduling system to avoid leaving staff stranded across the world.

“It’s time for Southwest Airlines to make it right,” Massoni said. “Make it right on fixing issues that are in play right now with our airline and by getting us a contract that we have been waiting for too long.”

Once Southwest gets its planes back in the air, it will have to answer questions from lawmakers and U.S. transportation officials.

Secretary of Transportation Pete Buttigieg spoke to Jordan on Tuesday about the airline’s promise to provide meals and hotel accommodations to stranded passengers.

“When a flight is canceled or severely delayed and it’s the airline’s fault, they are responsible for taking care of the customer,” the federal agency wrote in a tweet. “Southwest needs to make good on its promise to travelers.”

On its website, Southwest told customers affected by canceled or delayed flights between Dec. 24 and Jan. 2 to submit receipts. The airline said, “We will honor reasonable requests for reimbursement for meals, hotel, and alternate transportation.”

Senate Commerce Committee Chair Maria Cantwell, a Democrat from Washington, said her panel will be investigating the situation.

“The problems at Southwest Airlines over the last several days go beyond weather,” Cantwell said in a statement. “The committee will be looking into the causes of these disruptions and its impact to consumers.”

She also used the meltdown to buttress calls to strengthen rules on compensating customers.

Two other senators, Democrats Ed Markey of Massachusetts and Richard Blumenthal of Connecticut, said the airline should compensate customers, not just for the cost of their tickets and accommodations but for ruined holidays as well.