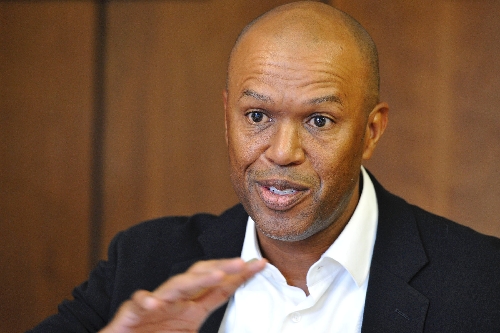 Management of the Las Vegas Monorail has a new focus of boosting ridership and potentially expanding the line, officials said Tuesday, after a two-year-long bankruptcy reorganization wiped away more than 98 percent of the transit system’s debt.

However, any extension of the 3.9-mile-long monorail path from its current route behind resorts on the east side of the Strip would need financial backing from federal transportation funds rather than private investment, officials said.

“We have had discussions with (the hotels’) senior management and we’re looking for them to have a bigger voice than they have had before,” Las Vegas Monorail Chief Executive Officer Curtis Myles said Tuesday during a meeting with the Las Vegas Review-Journal editorial board.

The reorganization plan reduced the business’s debt from $757 million to a more manageable $13 million and maintained the company’s not-for-profit status.

“The monorail is far from perfect, but it has been successful from every point of view except one,” said former Clark County Commission Bruce Woodbury, a member of the monorail’s board.

He said investment bankers who bought the initial bonds lost money because the company that insured the notes, Ambac, also went bankrupt.

“Investment bankers thought they were pretty were well protected,” Woodbury said. “From every other point of view, this system has been a success.”

Woodbury said the monorail has relieved traffic congestion on Paradise Road when large conventions are in town. According to the monorail’s figures, the trains every year average 65,000 to 70,000 riders during large citywide trade shows.

The reorganization gave the Las Vegas Monorail the financial capability to replace and repair equipment and could add a station to the transit line’s current seven stops serving eight hotel-casinos between the MGM Grand to the south and the now shuttered Sahara to the north. The monorail also serves the Las Vegas Convention Center.

The system has carried more than 50 million riders since 2004, but use has declined since 2005, according to the monorail company’s quarterly reports. Closing the Sahara in May 2011 caused a drop in ridership originating from the hotel’s Paradise Road platform.

Ownership consolidation over the past decade put most of the Strip resorts connected to the monorail under the control of MGM Resorts International and Caesars Entertainment Corp.

MGM Resorts attorney Mark Russell and Caesars Entertainment regional president Rick Mazur were added to the board of directors.

Myles said the monorail company is hopeful for more Strip support. The Sahara is scheduled to be renovated into the SLS Las Vegas, but a schedule hasn’t been set.

Monorail leaders are also hoping for increased ridership from The Linq, a $550 million retail, dining and entertainment complex being built by Caesars Entertainment between the Flamingo and Imperial Palace, soon to be renamed The Quad.

Monorail officials would like to extend the current track to McCarran International Airport and began the process as far back as 2007. But the recession and the monorail’s bankruptcy reorganization shelved the plans.

One concept for expansion could be taking the monorail to the University of Nevada, Las Vegas and the site of the school’s potential sports arena. Monorail officials are also looking at taking the line across Las Vegas Boulevard to serve hotel-casinos on the west side of the Strip.

Tony Santo, owner of Plaza operator Santo Gaming and a member of the monorail’s board, said extending the monorail to McCarran, “makes the most sense.” Santo admitted, as a casino operator, he would like to see the monorail extend downtown, but only if it makes sense financially.

“It’s all contingent on federal money and only if there is the ridership to support it,” Santo said. “We need to do whatever is feasibly right for the monorail.”