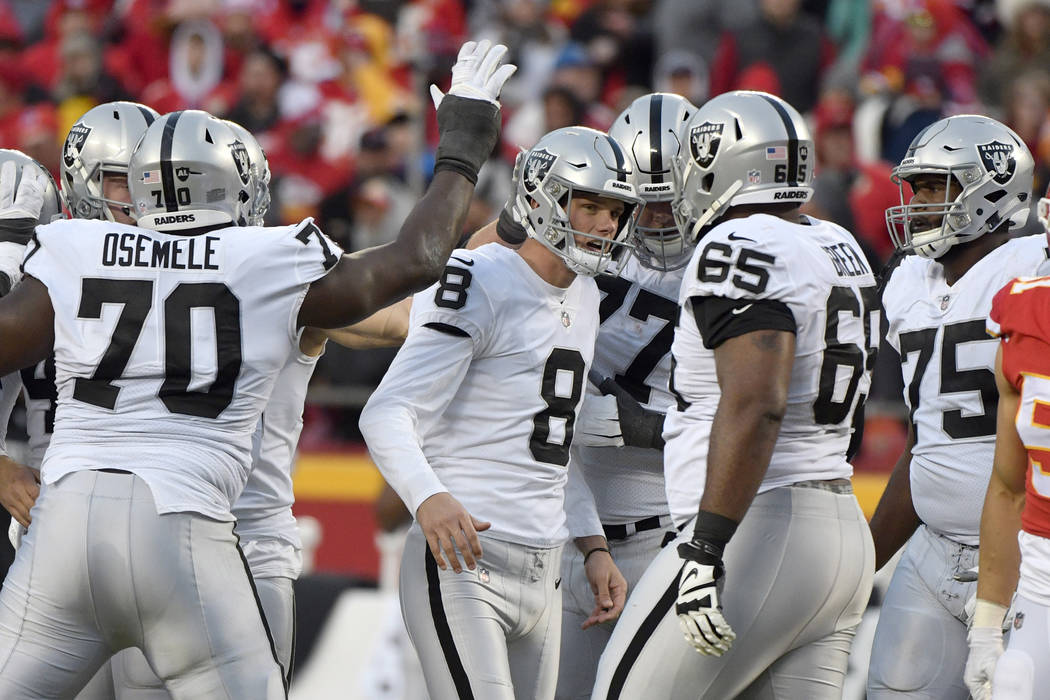 Oakland Raiders kicker Daniel Carlson (8) is congratulated by teammates after he kicked a field goal against the Kansas City Chiefs in Kansas City, Mo., Sunday, Dec. 30, 2018. With the Raiders moving to Las Vegas, tourism officials hope a Super Bowl is in the city's future. (Ed Zurga/AP)

“OK, so when are we going to have a Super Bowl in Las Vegas?” Hill asked the president of the Oakland Raiders.

Badain chuckled at the question from Hill, president and CEO of the Las Vegas Convention and Visitors Authority. He explained that the National Football League has changed the process for hosting the league’s championship game over the years. Now the first opportunity to host is in 2025, and the $1.8 billion stadium will have been open five years by then. Badain said the team will lead the charge to bring the game to Southern Nevada then.

“We’ll be very active in going after that bid,” Badain said during the panel, part of the Greater Las Vegas Chamber of Commerce’s largest annual networking event, attended by about 1,800 people at the Cox Pavilion and Thomas & Mack Center at UNLV.

“We’ve had conversations with the NFL and when that process starts, we’ll be very aggressive in going after it,” he said.

And, as Badain pointed out in the panel, the 65,000-seat stadium will have an important role in drawing new events, including concerts, to Southern Nevada on soft weekends.

“We’ve been involved in some other events and some other promotions, but not to the scale that we’re walking into here,” Badain said. “In the past year, we’ve met with dozens of large-scale events that want to come here, some that are already here, some that the venue didn’t exist here so now we’re talking about college football non-conference games, conference championship games, other large sporting events, concert promoters, large-scale corporate events.

“We also want to make sure that it’s augmenting what’s already being done here because we don’t want take business from somewhere else. A lot of the conversations we’re having are with people that brought a 15,000- to 20,000-person event, and now the company wants to do 40,000 to 50,000.”

Panelist Kevin Camper, vice president of sales and marketing at the Las Vegas Motor Speedway, said it will be important for large venue managers to be collaborative.

The Las Vegas Motor Speedway, which has a capacity of 80,000, is best known as the venue for NASCAR events, but it does have one major nonracing event in May — the Electric Daisy Carnival.

“How can we collaborate and strategically bring events to town that are cohesive with everybody else?” he asked. “We get a call every week about music festivals. We’re not in the concert business. We’re in the racing business, but I think collaboration and strategy in the long term is probably where our biggest success lies in the future,” he said.

Panelist Kurt Melien, regional president of Live Nation Entertainment, said another formula for success will be to attract major concert performers who will draw tourists from across the West. He acknowledged that Las Vegas will be competing with Los Angeles, Phoenix and Seattle for big acts in stadiums.

Melien said Live Nation stages about 1,450 events a year, and only about 100 of them are targeted for a local audience. Everything else will appeal to Las Vegas visitors.

Badain said one goal may be to provide a variety of events over a long weekend so that tourists are encouraged to extend their stays.

The Las Vegas Convention and Visitors Authority has helped organize a parade of events through partnerships with NASCAR, the World Rugby Sevens, and the Vegas Golden Knights. Badain said the Raiders could easily fit into a similar package if the timing and scheduling are right.

As venue infrastructure, including the Las Vegas stadium, develops, it’s encouraging that room inventory will be going up with Resorts World, Circa and the Drew projects underway, Hill said.

Hill announced that Las Vegas hosted 42.1 million tourists, including 6.5 million convention attendees, in 2018 with an 88.2 percent occupancy rate and $113.50 per available room per night. Until new room inventory comes online, Las Vegas is creeping toward its capacity, he said.