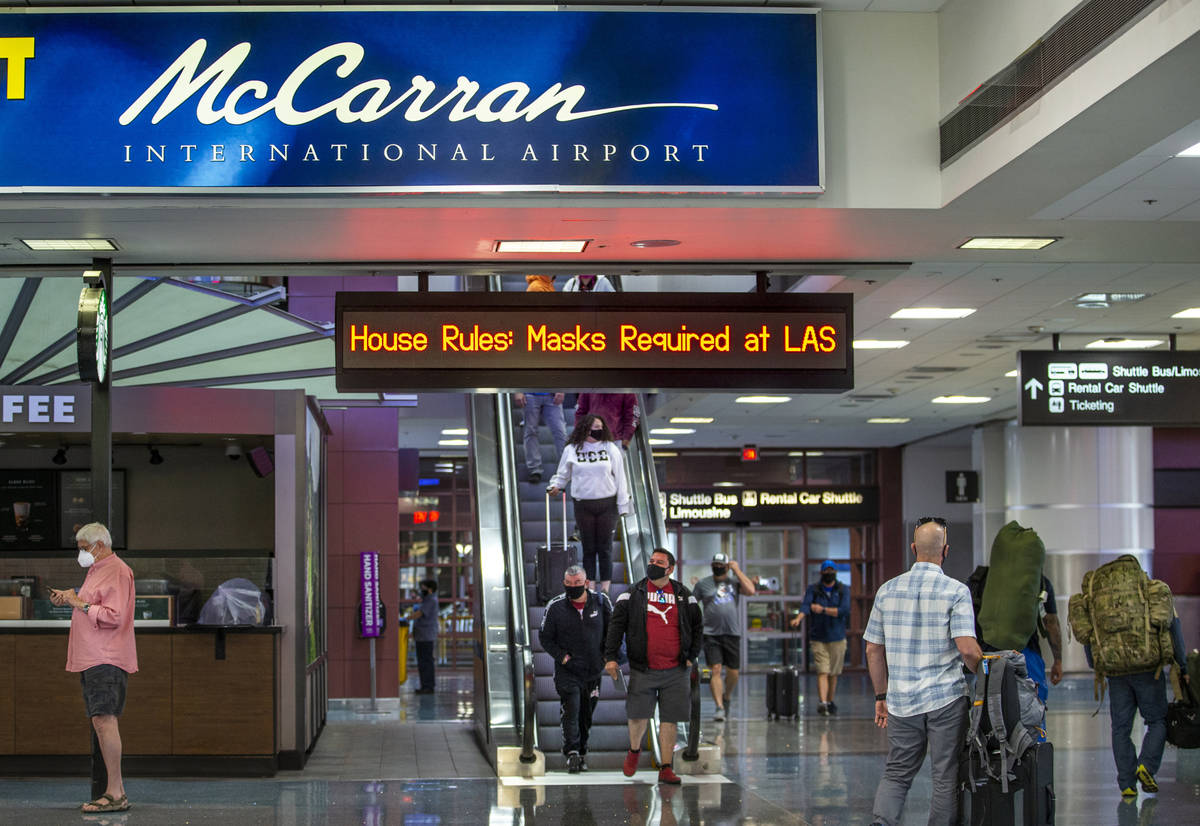 Airline and airport-related companies are set to furlough or lay off at least 2,123 workers at McCarran International Airport as early as Thursday.

Those employees are among more than 40,000 workers across the nation set to lose their jobs starting Thursday.

Since the pandemic began, thousands of flight attendants, baggage handlers, gate agents and others have been getting at least partial pay through $25 billion in federal grants and loans to the nation’s airlines. The payroll aid, approved by Congress in March, came with conditions including a prohibition on involuntary layoffs or furloughs, but that ban ends Wednesday.

At McCarran, where air travel is down 75 percent between March and August, several airlines and concessionaires have filed notices under the Worker Adjustment and Retraining Notification (WARN) Act alerting state and local officials to potential reductions in employee numbers because of the ongoing pandemic. The WARN Act requires companies with over 100 employees to give at least 60 days’ notice of mass layoffs.

Las Vegas-based Allegiant Air stated it would eliminate 220 positions locally, including 87 staffed positions. The remaining 133 positions include some that had been vacated before the pandemic, were in recruitment stages, or were scheduled to come online later this year.

“To say the pandemic’s impact on the travel industry — and aviation in particular — is entirely unprecedented would be a grave understatement,” Maury Gallagher, Allegiant CEO, said in a statement. “We were all hopeful that the worst of it would be over by October, but unfortunately the arc of the virus still remains largely unknown. We have made many sacrifices and hard choices over the past months to ensure we come through this crisis in the best position possible.”

Gallagher said some Allegiant employees took voluntary leaves or pay reductions to help the financial situation at the airline.

“I cannot thank them enough for their personal commitment to our company and our mission of making travel accessible to everyone,” Gallagher said. “It has gone a long way to buoy us to this point.”

Additionally, 275 Allegiant pilots had been alerted to potential furloughs in July, but spokeswoman Hilarie Grey said the airline is doing all it can to avert or mitigate those.

Frontier Airlines warned it was set to furlough 245 employees in its WARN letter dated July 31, stating the furloughs would occur as early as Thursday. The affected employees are pilots and flight attendants.

United Airlines said 346 employees would be affected by employee reductions, which it said are expected to last six months or longer.

Spirit Airlines announced in August that 286 employees based at McCarran would be furloughed starting Thursday, including 185 flight attendants and 101 pilots.

But after many of the 2,500 employees nationally who were included in WARN filings opted to take voluntary leave offers, fewer than 5 percent of them ended up having to be furloughed, the company said Wednesday.

Food service providers at McCarran are also laying off droves of employees. HMSHost will cut 940 employees Oct. 15, with Sky Chefs Inc., a food catering company, laying off 86 of its employees Thursday.

Around 16,900 employees nationwide volunteered for the programs, representing nearly 27 percent of Southwest’s workforce.

“Based on the strong take rates from these voluntary programs, currently, we do not intend to pursue furloughs and layoffs, or pay and benefits cuts, through year end; however, we will continue to plan for multiple weak scenarios and maintain our preparedness,” Southwest CEO Gary Kelly said in the company’s second-quarter earnings call.

With early retirements and other incentives to quit, U.S. airlines have already shed about 45,000 jobs during the pandemic, or 48,000 including cargo carriers. Government figures are available only through July, however.

U.S. passenger airlines and their labor unions are lobbying for another $25 billion in taxpayer money to pay workers for six more months, through March. Their request is tied up in stalled negotiations over a larger pandemic relief measure.

Gallagher is holding out hope that more help could soon be on the way for the struggling industry.

“Because of the pandemic, airlines are operating with daily losses that are unsustainable,” Gallagher said. “No industry can operate this way for very long.”