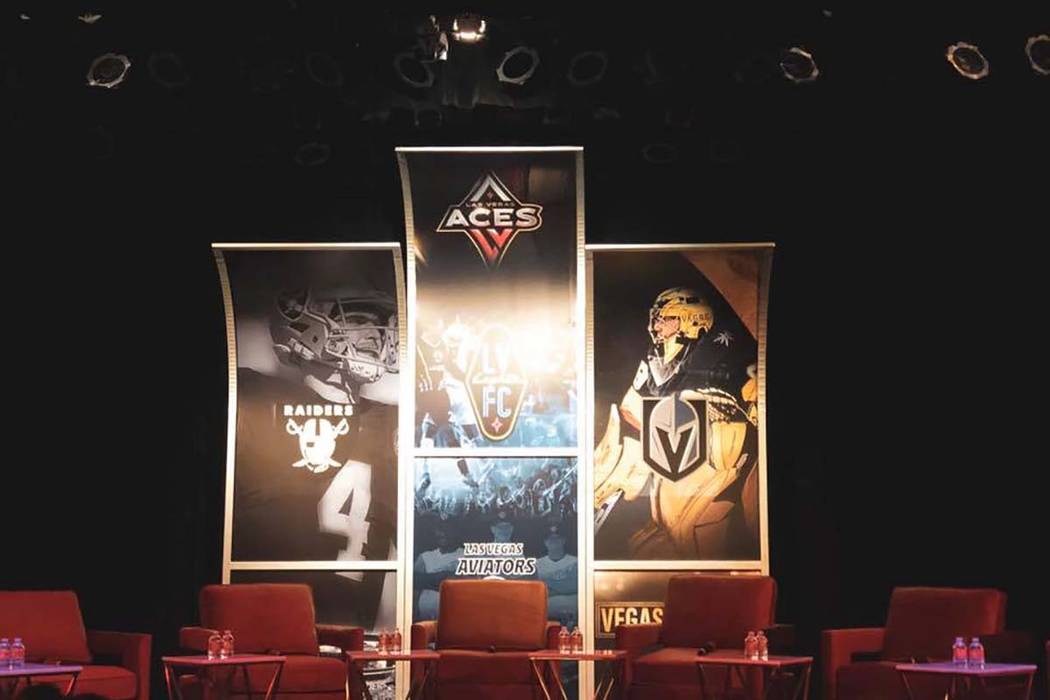 Prior to panelists taking the stage on Wednesday, Sept. 25, 2019, at TI. (Las Vegas Hospitality Association Facebook) 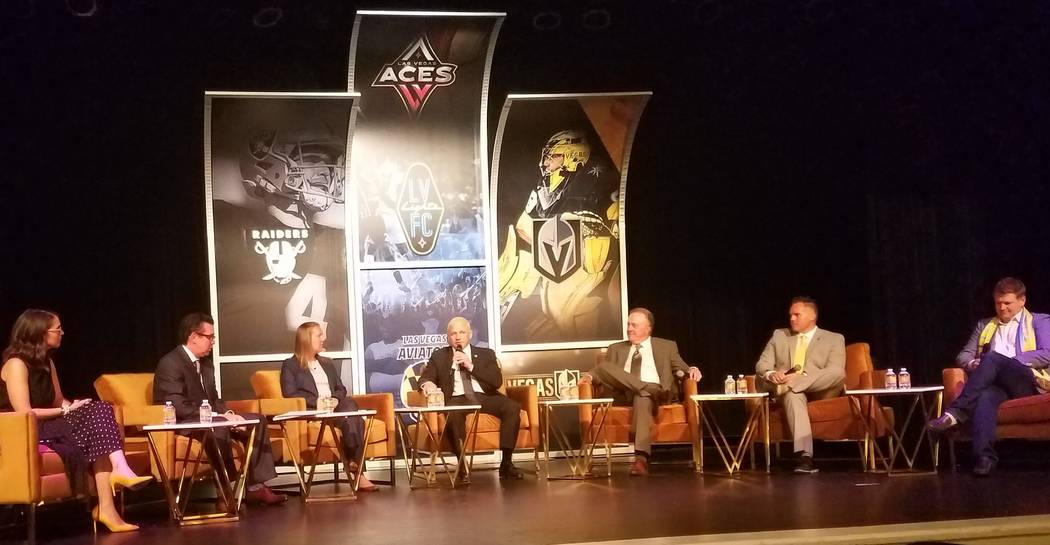 A ballroom at Treasure Island almost sounded like a frenzied stadium or arena Wednesday.

Top executives from each of those teams shared their insights on how Las Vegas continues to emerge as a leader in sports entertainment, while a representative from the Las Vegas Convention and Visitors Authority added how that love for sports is driving tourism to Southern Nevada.

More than 300 members of the Las Vegas Hospitality Association cheered as the team executives recounted their successes and dropped hints about what’s next for them in “Game On,” a panel on the growth of professional sports in Las Vegas.

Brian Killingsworth, chief marketing officer for the Golden Knights, said the team and the community embraced each other in the wake of the Oct. 1 shooting, and the team has maintained its presence and isn’t just writing checks to charities.

For the Lights, the USL Championship minor league soccer team, focusing on the city’s Hispanic market was a key to success.

“A third of our community is Hispanic, primarily Mexican-Americans, and they primarily speak two languages at home,” said team owner and CEO Brett Lashbrook.

“I think they are a very misunderstood population, but we have found that there is so much disposable income, there is so much interest, there is so much city pride in that community. And when you take the world’s most popular game, put it in the world’s most entertaining city and place it in downtown Las Vegas, it’s not a surprise how much we have overindexed in the local Hispanic population of being drawn to Lights games,” he said. “But it even surprised us as to how much success we’ve had in being able to tap into that market. It’s about treating the sport authentically, city pride and so much diversity.”

Don Logan, president of the Las Vegas Aviators, the city’s Minor League Baseball team, said the team found instant success by signing deals for a new place to play and the Las Vegas Ballpark is now the gold standard of the minors.

“We spent 36 years figuring out what the gold standard is,” Logan said. “And we have a team of people that are tireless.

“The back-of-the-house player amenities are as good, if not better than all of baseball, Major League and Minor League,” he said. “Now it’s up to us to not get complacent and to understand that we set the bar really high and it’s up to us to make sure we live up to that gold standard and pay attention. We’re going to keep grinding because that’s what it is in baseball.”

Another team headed for a new venue is the Raiders and team President Marc Badain said not only would Allegiant Stadium become the team’s home in 2020, but it will set a high bar for other cities competing to attract major events.

“This is the last piece of infrastructure that will be needed to make it something that every other city is going to look at and say, ‘Wow, we’re in trouble, there’s no way to compete,’” he said. “We’re seeing that, not just in the sports world and not just the concert world, but large-scale events that didn’t have a venue of this size. It gives (Las Vegas) another tool to go out and market the city and market everything this city has to offer and the stadium provides that.”

Christine Monjer, assistant general manager of the Aces, the city’s Women’s National Basketball Association team that wrapped up its season Tuesday after a playoff run, said the team is most proud of the relationships the team has built within the community.

“(The WNBA has) 144 players and these are the best basketball players in the world and it’s really important to get them out there to tell their stories,” she said.

Other comments from panelists:

-Lisa Motley, director of sports marketing for the LVCVA, said with Allegiant Stadium due to open next year, the organization has approached the NCAA about hosting some 24 collegiate championship events in the years ahead, from basketball’s Final Four and hockey’s Frozen Four, to golf championships, rowing events and other court sports.

-Killingsworth said the Golden Knights have been pleasantly surprised at how collaborative the resort industry is with seven partners sharing events and activities in support of the team. While the team plays at T-Mobile Arena among several major MGM Resorts International properties, there are relationships with Caesars Entertainment Corp., The Cosmopolitan of Las Vegas, Station Casinos Inc., Wynn Resorts Ltd., D Las Vegas and the Hard Rock Hotel.

-Players are taking notice of Las Vegas as a great place to play. When the Vegas Golden Knights negotiated with the Ottawa Senators for right winger Mark Stone, he was given a helicopter ride over the city and many of the major resorts flashed his picture on their marquees during the ride, Killingsworth said. “That spreads around the league and it’s a nice recruiting tool,” he said.

-Logan said the Las Vegas Ballpark “will be the epicenter for baseball” in Southern Nevada, already hosting high school and American Legion baseball championships and looking forward to the return of Major League Baseball “Big League Weekend” in March. World Baseball Classic qualifying games also are expected to be played in Las Vegas.

-The Aces turned this year’s WNBA All-Star Game into a three-day event and hosted the league’s first Fan Fest.

-All the team executives encouraged those attending the event to support all the Las Vegas teams. That inspired Logan to add that support also is essential to UNLV’s sports teams.

-Badain said National Football League executives are impressed with how inviting and inventive the community is. “They’ve been blown away by how everybody gets to ‘yes.’” Badain said. “They come up with an idea, they come up with a concept, and while there may be obstacles present, there are people figuring out ways to get past them as opposed to putting up new ones. That’s the spirit we’ve seen in this city for about four years and that’s the type of environment we have.”

-Motley said the LVCVA will soon introduce an online volunteer portal for people who want to volunteer their time for the NFL Draft event in April and other major events being added to the calendar.