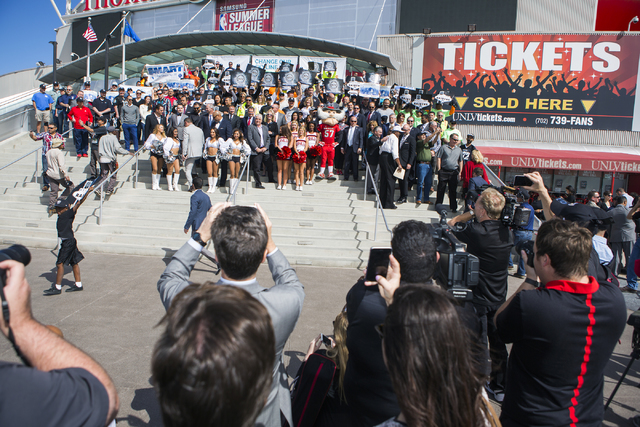 All the information provided by proponents and opponents of the stadium financing package over 256 days will be distilled into a couple of days. The matter will be resolved by 63 lawmakers the people of Nevada have entrusted to make important decisions about the future of our state.

If two-thirds of those 63 lawmakers concur — 14 in the Senate and 28 in the Assembly — and Gov. Brian Sandoval signs it into law, the plan would take the next step. That would be a January presentation before National Football League owners, who would need three-quarters of the 32 team owners to sign off on the relocation of the Oakland Raiders to Las Vegas. NFL insiders seem to think the ownership votes are there.

But with all the supermajorities necessary to get the deal done, the stadium proposal isn’t a slam dunk.

Lawmakers, most of them in the midst of re-election campaigns, are conscious that support for the stadium could cost them some votes Nov. 8. The dilemma of the legislator: Which constituency do you value more? The stadium proponents, including the gaming, tourism and construction trade industries, who are financial contributors to political campaigns, or taxpayer advocates and concerned residents?

The Nevada Taxpayers Association and Nevadans for the Common Good oppose the stadium’s financing plan, primarily because it requires spending $750 million from a 0.88 percentage-point increase in Southern Nevada’s 12 percent tax on hotel and motel rooms. The stadium’s private partners, the Raiders and the family of Las Vegas Sands Corp. CEO and Chairman Sheldon Adelson, will pay for the remaining $1.15 billion in construction and infrastructure costs, as well as any overruns.

Most opponents to the plan have no problem with the concept of a new Las Vegas stadium to replace Sam Boyd Stadium, which is small, outdated and far from the Strip. They just don’t want to pay for any of it despite the fact that they would share its benefits.

True, there’s no clause in the proposal that would direct any percentage of profits back to the public.

But just about everybody, proponents and opponents alike, aren’t expecting there to be much profit, mostly because some revenue generated by the stadium would be used to maintain and market the building, which would be owned by the public and managed by a stadium authority board.

But the public will profit regardless — from the presence of the stadium. Events staged at the stadium would attract visitors and attention.

It’s highly likely that new development would occur in the vicinity of the stadium, which would bring higher property tax collections.

Visitors will spend on hotel rooms, food, transportation, drinks and retail shopping. That’s where our schools, roads, parks and all things supported by tax dollars would benefit.

It’s the foundation of our economy.

Those who worry about whether the stadium would be used for 46 events per year — the number necessary to make the economics of the plan work — have never seen how hard organizations like the Las Vegas Convention and Visitors Authority and Las Vegas Events work to bring special events to the city. They are relentless and have statistics showing that events staged in Las Vegas are better attended because they’re here, thanks to the numerous amenities available citywide.

Coming to Las Vegas won’t just be about seeing a Raiders game — it’ll be about staying at a quality resort, eating at a fabulous restaurant, maybe seeing a show or taking a side trip off the Strip.

Those who worry that the revenue generated by the room tax increase might not cover the cost of retiring the general obligation bonds, which would be purchased to pay for stadium construction, didn’t attend the 16 Southern Nevada Tourism Infrastructure Committee meetings at which those concerns were addressed.

The 11 members of the committee were worried about those things, too. That’s why throughout the process the financial experts tinkered with the formulas to make absolutely sure a stadium financing plan could withstand an inevitable dip in the economy.

The revenue projection formula is designed to generate 1½ times the amount required for bond payments, and under our current economy, now in an upswing, it’s coming in at nearly twice the necessary amount.

It’s important to note that the primary purpose of the room tax is to support tourism-related projects, and that includes the planned $1.4 billion expansion and improvement of the Las Vegas Convention Center. That project — and the room tax increase needed to fund it — is expected to be a part of the same legislation lawmakers will consider for the stadium.

The all-or-nothing strategy is risky, but it’s clear that most lawmakers understand the convention center improvements are necessary for Las Vegas to maintain its lead as the nation’s top convention destination.

On the stadium, the most common refrain is, “Let Sheldon Adelson pay for all of it.”

Couldn’t you make that argument for just about any circumstance in which a financial shortfall is involved?

Our transportation infrastructure is crumbling. No problem, let Warren Buffett pay for it. Our schools are in big trouble. Quick, somebody get Bill Gates on the phone.

The stadium would be an easier sell if some of the local beneficiaries of its presence would have stepped up.

Maybe, if they want it badly enough, the Wynns, Murrens, Boyds and Fertittas of our community would rescue the stadium if support for public funding is teetering.

It’s definitely going to be an interesting week.