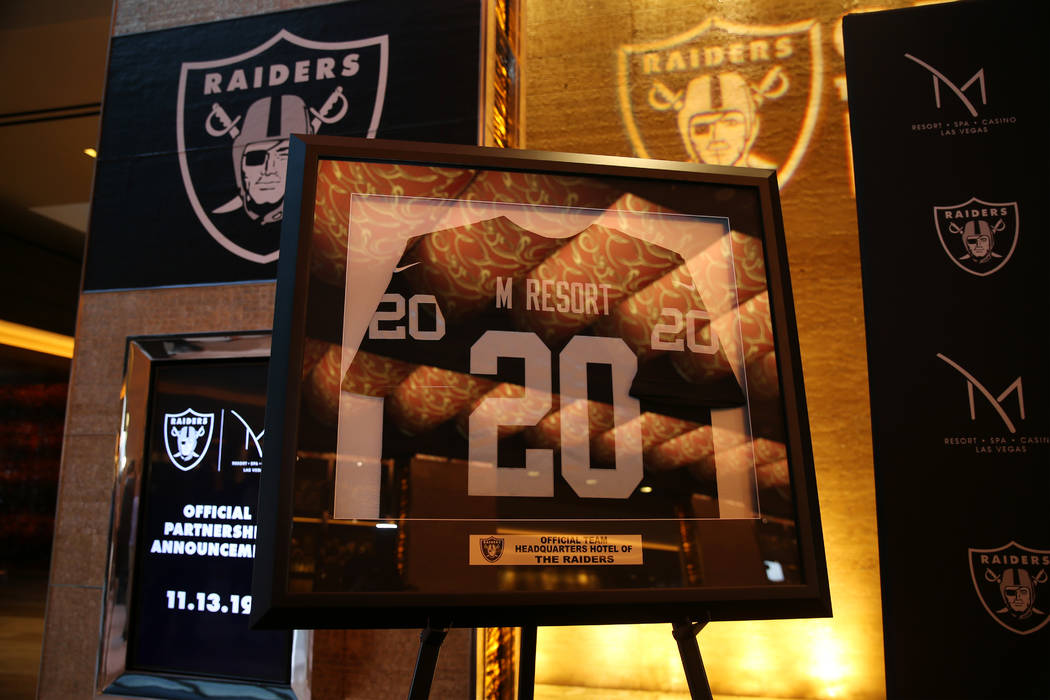 A custom M Resort Raiders jersey on display during a press conference announcing a partnership between the Raiders and the M Resort to become the official Raiders team headquarters hotel, at the M Resort in Henderson, Wednesday, Nov. 13, 2019. (Erik Verduzco / Las Vegas Review-Journal) @Erik_Verduzco 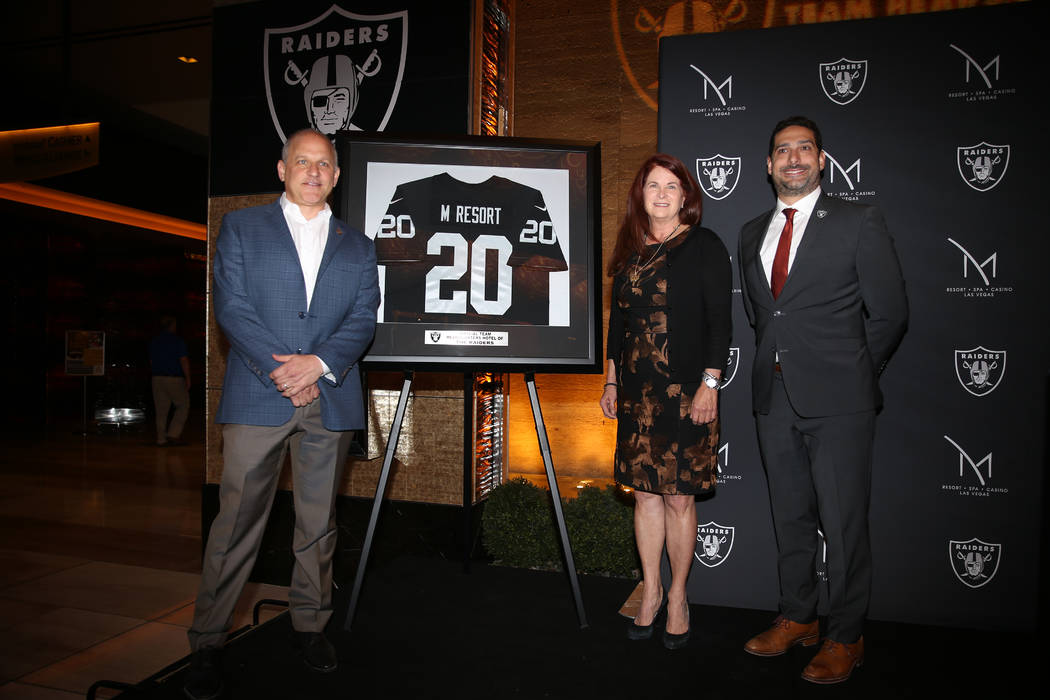 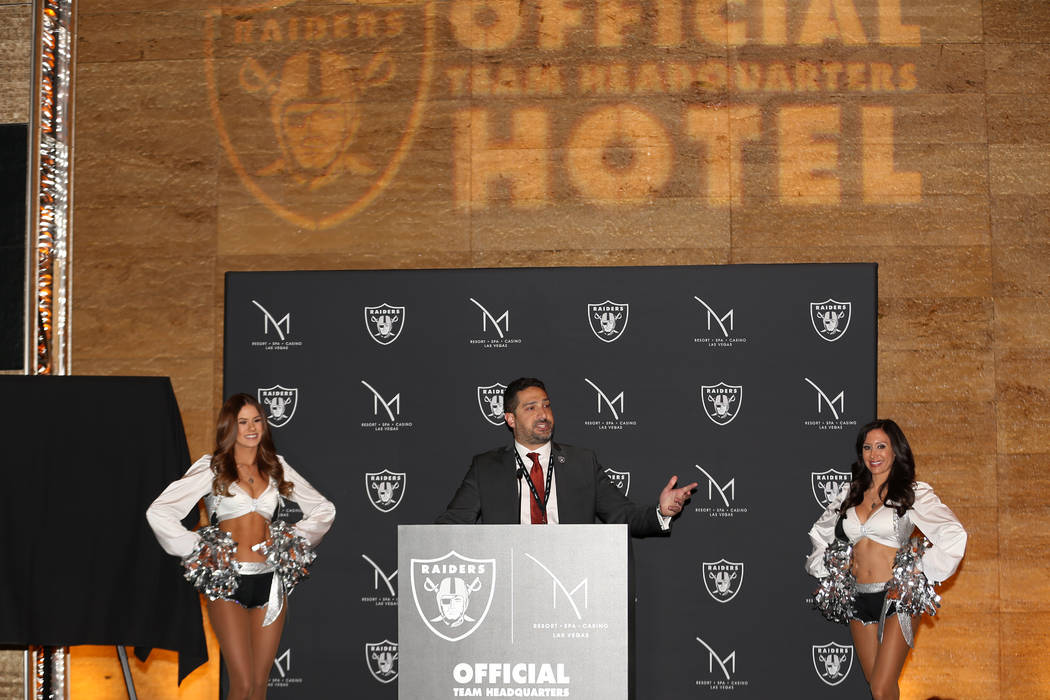 Hussain Mahrous, vice president and general manager for the M Resort, speaks during a press conference to announce a partnership with the Raiders to become the official Raiders team headquarters hotel at the M Resort in Henderson, Wednesday, Nov. 13, 2019. (Erik Verduzco / Las Vegas Review-Journal) @Erik_Verduzco

And it was a lucky day for Henderson resident David Powell.

Mahrous got to announce that his resort is partnering with the Raiders to become the “Official Raiders Team Headquarters Hotel.”

And Powell, a newly arrived Henderson resident who decided to play blackjack at the resort, stumbled upon the late-afternoon announcement of the partnership and got to meet Raiders legend Reggie Kinlaw, a Super Bowl ring-winning nose tackle who played alongside Lyle Alzado and Howie Long, who attended the announcement event.

“I’ve been a fan of the Raiders since the ’70s,” Powell said. “I move here and the stadium is being built, the team headquarters is in my backyard, and now, this.”

For the Raiders, the M Resort will become the team’s meeting place the night before home games.

Other terms of the 10-year deal were not disclosed.

The 390-room Henderson resort is about 3 miles from the Raiders’ under-construction team headquarters, which includes practice fields, a training center and team offices. The building is expected to be completed by April and occupied before the start of the 2020 NFL season.

M Resort is the closest major hotel to the Raiders’ building.

Resort executives also announced as part of the partnership it will open an official Raiders-branded restaurant currently being referred to as the Raiders Bar & Grill in 2020 and will offer guests and players exclusive Raiders-branded experiences both on property and throughout the city.

Mahrous said a team store selling Raiders gear also is planned at the resort, which is operated by Pennsylvania-based Penn National Gaming Inc.

“The Raiders have been a fantastic partner,” he said. “They have been one of the classiest organizations I’ve ever had the pleasure of dealing with.”

The Raiders and NFL brands, he said, will definitely help the resort.

“It is definitely an exciting day and it means the world to the M Resort,” he said. “The NFL is a transcendent brand. It is America’s pastime now. There are a handful of brands in the NFL that transcend even that, and I think we can count those teams on one or two hands and the Raiders are one of those teams.”

Raiders President Marc Badain said the proximity of the resort to team headquarters is a big plus.

“To have this facility be a nine-iron away from our practice facility is really a positive for the team and for the M hotel,” he said.

He said he has stayed at the resort many times as the team continues its transition from Oakland to Las Vegas to begin play in Southern Nevada next season.

“Some of us have already experienced the first-class service and excellent amenities at M Resort, and we look forward to extending those opportunities to others in the Raider family,” he said.

Henderson Mayor Debra March, who attended the announcement event, said she’s happy for the team’s commitment to her city.

“To have the team staying at this resort is a coup for the community, that they’re not going down into Las Vegas and staying downtown,” she said. “They’ve committed themselves to Henderson and to being a part of the fabric of our community.”