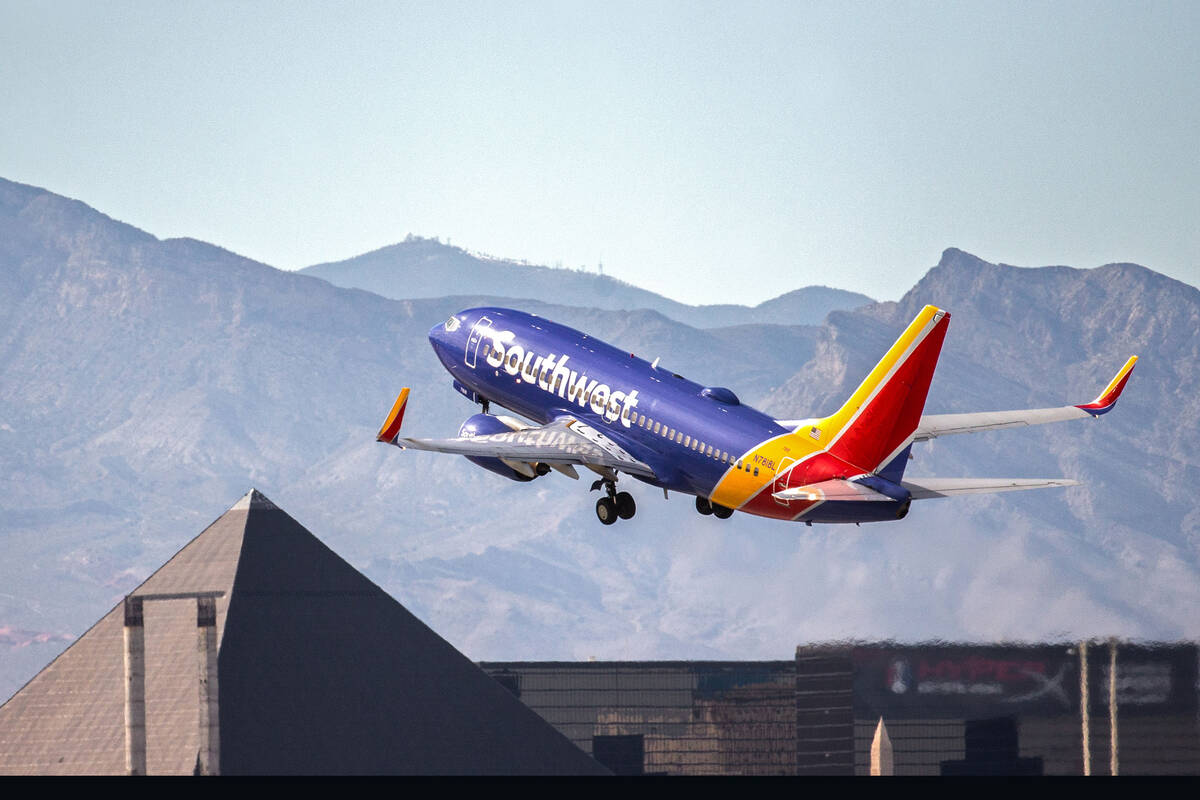 The airline, which brought 1.3 million passengers to and from Las Vegas in December, lost $1.3 billion in 2021.

Southwest also warned that it expects to lose money in the first three months of 2022.

“We ended 2021 on a high note with our first quarterly profit, excluding special items, since before the COVID-19 pandemic began,” said outgoing CEO Gary Kelly.

Kelly will become executive chairman of the company and Bob Jordan, executive vice president of Southwest, will succeed him as CEO on Tuesday.

Southwest battled its way through the omicron variant outbreak with 5,000 employees calling in sick in the past month, hindering operations across the system.

“We are experiencing higher unit cost inflation in 2022 as we continue to navigate the pandemic,” Jordan said. “The omicron variant significantly impacted our available staffing beginning in early January, and we temporarily extended incentive pay for operations employees through early February, as we strive to maintain sufficient available staffing and minimize flight cancellations. Over the last two weeks we have returned to solid operational performance like we experienced over the holidays in fourth quarter 2021.”

Jordan also hinted that Reid International could be in line for additional Southwest flights.

“Restoring both the network and our fleet efficiency are key to returning to historic efficiency levels,” Jordan said. “Beyond that, I’m really excited about that opportunities to continue network growth as we add gates in key cities such as Denver, Phoenix, Las Vegas, Baltimore, Nashville and even more. Beyond 2023, we see opportunities to meet and then beat our historic productivity and efficiency levels as we continue to grow the company.”

In 2021, Southwest added service to 14 airports, many of them with direct flights to and from Las Vegas.

The rise of the omicron variant of COVID-19 and continuing weak business travel will cut revenue by $330 million and lead to losses in January and February, Southwest said. The airline predicted it will be profitable for the remainder of the year.

Southwest said 5,000 employees tested positive for COVID-19 during the first three weeks of January, contributing to the roughly 5,700 flights it has canceled so far this month, according to data from FlightAware. The Dallas-based airline said absenteeism has recently declined.

The surge of virus infections also slowed ticket sales and led to more trip cancellations, but those trends have begun to decline. Jordan said the airline is optimistic about bookings and revenue in March.

The CEOs of JetBlue and Alaska Airlines said they expect travel to rebound this spring and summer, adding to recent comments by Delta, United and American executives that omicron will delay but not derail the industry’s recovery.

Airline leaders said the recovery will be uneven and could be sidetracked again by new variants. Southwest will trim first-quarter flights by about 9 percent, more than previously planned.

“I would have never bet a year ago that this is where we would be here in early 2022,” Kelly said. “I thought we would have this pandemic beat and behind us, and it’s far from that.”

Last month, Kelly questioned the benefit of wearing face masks on planes because, he said, strong air flow and filters on modern jets make air travel safe. But on Thursday he said that with virus cases still elevated, “now is not the right time” to end the federal rule that requires passengers to wear masks.

Southwest attempted to grow faster than other U.S. airlines as travel rebounded last year, but the strategy backfired, as staffing shortages contributed to high numbers of canceled flights last summer and fall.

When other airlines started canceling flights around Christmas because of employees being out with COVID-19, Southwest was not hit as hard. Helane Becker, an analyst for financial-services firm Cowen, said Southwest seemed to have been prepared — it trimmed the December schedule to a more manageable size after its own struggles with cancellations and delays earlier in 2021.

At an investor event last month, Southwest executives pledged to improve reliability and return the company to growth, which has been crimped the last couple years because of the grounding of its Boeing 737 Max planes and the pandemic.

Southwest’s fourth-quarter profit was a reverse from a loss of $908 million a year earlier. Excluding special costs, Southwest earned 14 cents per share. Analysts expected adjusted earnings of 7 cents per share, according to a FactSet survey.

Labor and fuel costs jumped in the fourth quarter, when Southwest boosted pay for employees to pick up extra work. Southwest, which shrank by thousands of workers in 2020, went on a hiring spree last year and expects to add another 8,000 workers this year.

JetBlue Airways posted a $129 million loss. The New York airline said high COVID-19 numbers in the Northeast led to more cancellations and weak bookings in late 2021, and first-quarter revenue will be 11 percent to 16 percent lower than the same period in pre-pandemic 2019, but a decline in omicron infections should lead to a profitable second quarter and strong summer.