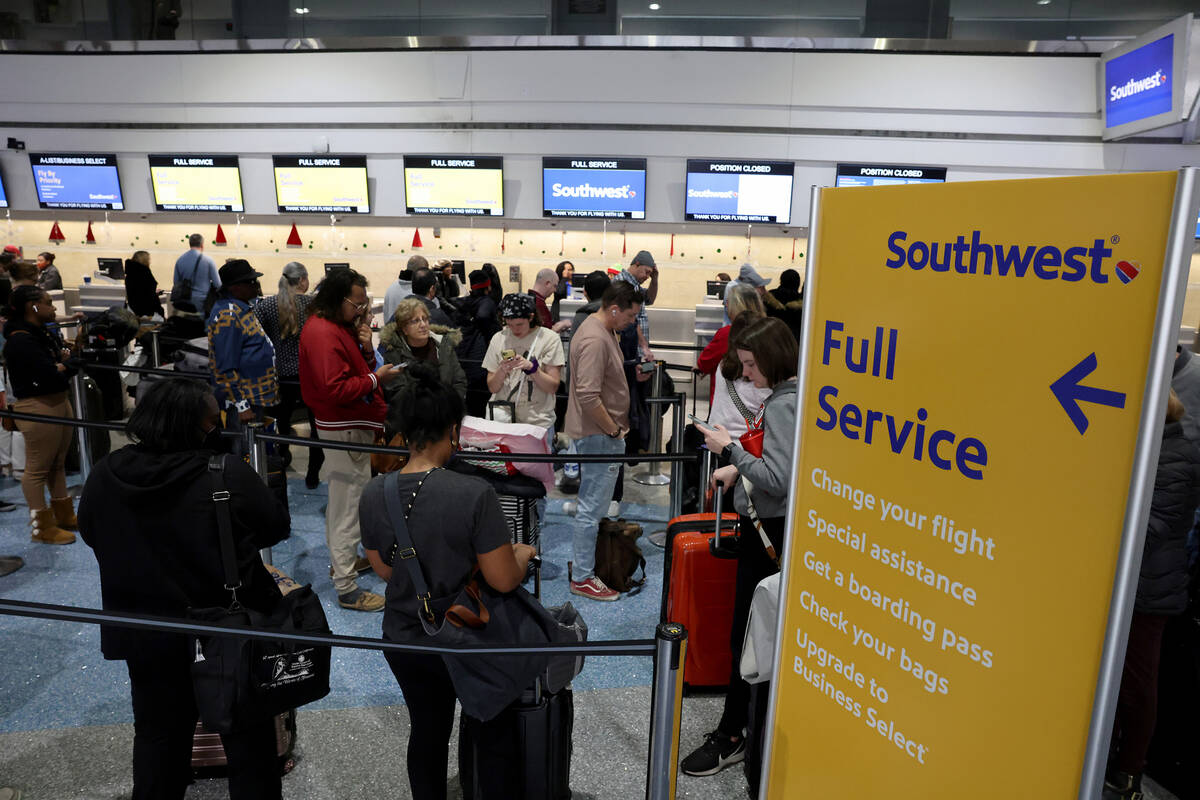 Southwest Airlines said it expects to return to normal operations with minimal disruptions on Friday, bringing an end to six days of chaos that affected thousands of passengers in Las Vegas and nationwide.

“We are encouraged by the progress we’ve made to realign crew, their schedules and our fleet,” representatives of Dallas-based Southwest said in an emailed statement. “With another holiday weekend full of important connections for our valued customers and employees, we are eager to return to a state of normalcy.”

Southwest leaders believe they will have enough empty seats over the next several days to accommodate any stranded passengers still wishing to fly on the airline — while conceding that many had either given up or found other transportation.

On Thursday, Southwest accounted for about 95 percent of all canceled flights in the United States. Executives said they had canceled only 39 flights, or less than 1 percent of the schedule, for Friday.

Among the 4,300 flights that were canceled coming in and out of the U.S. 2,363 were Southwest flights as of Thursday night. The airline has scrapped more than 13,000 flights since Dec. 22, according to tracking service FlightAware.

Southwest’s problems started with a storm last week that brought cold and windy weather across the country that affected many airlines. Other airlines bounced back within a couple days, but Southwest troubles spiraled out of control because of a breakdown with staffing technology.

The airline’s CEO initially said it could be next week before the flight schedule returned to normal, but company leaders told employees late Wednesday that the carrier could have its full schedule restored by Friday.

“Right now it looks like a pretty smooth operation as we head into this transition tomorrow to allow us to resume operations on Friday at our normal schedule, which is a big step up,” chief operating officer Andrew Watterson said in the message.

CEO Robert Jordan said it was too early to say how much the company will lose in revenue and incur in extra costs because of the current crisis. Jordan told reporters that events of the last week will likely cause Southwest to re-examine priorities and spending levels for technology improvements that were already underway, but he offered no specifics.

“This has been an incredible disruption, and we can’t have this again,” he said.

The airline has issued numerous apologies and has set up a website for affected passengers to submit refund and reimbursement requests.

“We know even our deepest apologies — to our customers, to our employees, and to all affected through this disruption — only go so far,” the airline’s statement Thursday said.

“We’ve set up a page at Southwest.com/traveldisruption for customers to submit refund and reimbursement requests for meals, hotel and alternate transportation as well as to connect customers to their baggage. We have much work ahead of us, including investing in new solutions to manage wide-scale disruptions.”

The federal government is investigating what happened at Southwest. Transportation Secretary Pete Buttigieg took fresh swipes at the airline on Thursday, tweeting that he would hold Southwest responsible for “unacceptable performance.” He asked followers to tell his department if Southwest fails to reimburse them for travel costs.

After halting sales on most tickets this week, Southwest now has flights available starting Friday on its website. Southwest has nearly 4,000 flights a day planned over the New Year’s weekend as millions of travelers look to return back home, to college and back to work after the holiday break.

If a flight is canceled, Southwest is required to rebook passengers with no additional cost on another Southwest flight, offer meal vouchers or cash if the new flight requires the buyer to wait more than three hours, provide a free hotel room if the new flight is more than a night away and provide a free ride to and from that hotel, according to the U.S. Department of Transportation website. The only exception is a non-controllable cancellation, such as weather conditions that day.

If weather does cancel a flight, Southwest is required to offer a full refund on all tickets, including non-refundable tickets, if the traveler chooses not to book a new flight.

“I would be hesitant to suggest the Department of Transportation step in as government intervention seems to be more likely to cause more red tape rather than provide any practical solutions, but I would recommend that the LVCVA work to court other airlines to look at extending competition in the market,” Belarmino said.

She also suggested that highways between Southern California and Las Vegas may fill up over the weekend after travelers contemplating a trip to Southern Nevada drive instead of fly to avoid the prospect of flight cancellations.