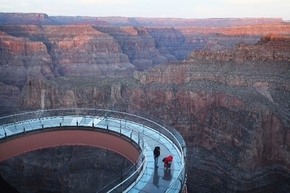 Access to the Grand Canyon Skywalk got easier Tuesday as a temporary road was finished. The new road eases a dispute between a rancher and the Hualapai Tribe that operates the Skywalk. In this April 11, 2011 file photo, workers inspect the Skywalk before beginning to replace the glass panels. 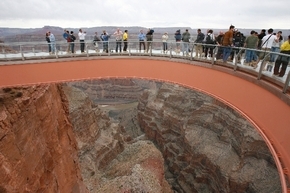 In this March 20, 2007 file photo, People walk on the Skywalk during the First Walk event at the Grand Canyon on the Hualapai Indian Reservation at Grand Canyon West, Ariz. 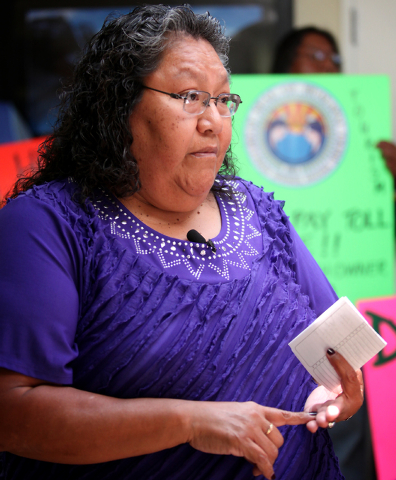 Sherry J. Counts, Hualapai tribal chairwoman, right, are seen at a press conference at Chinese Host Tours in Las Vegas Wednesday, June 5, 2013 to draw attention to rancher Nigel Turner's recent $20 charges to tourists trying to get to the Grand Canyon West and Skywalk at the Grand Canyon. Many Chinese tourists have been affected by the toll charge. (Jessica Ebelhar/Las Vegas Review-Journal)

FLAGSTAFF, Ariz. — A three-year contract dispute over the Grand Canyon Skywalk is over.

The Hualapai Tribe, which owns the horseshoe-shaped glass bridge on the northwestern Arizona reservation, and the family of the Las Vegas businessman who developed it have reached a financial settlement. The terms of the agreement are confidential, but it resolves all legal battles in tribal, bankruptcy and federal court.

The tribe maintains management of the Skywalk that has been the signature of its tourism operation since it opened in 2007. Tribal Chairwoman Sherry Counts thanked David Jin in a statement late Thursday for his contribution to the popular attraction.

Jin died last year, but his family pursued what he said were violations of his constitutional rights when the tribe used an eminent domain ordinance to write Jin out of his management role. Jin’s attorneys argued the tribe owed him as much as $277 million.

The tribe argued that Jin breached the contract by failing to complete a visitors center that tourists must walk through before stepping on to the glass bridge that juts out 70 feet from the west rim of the Grand Canyon and provides a view of the Colorado River 4,000 feet below. The tribe estimated the fair market value of the Skywalk at $18 million.

Jin first sued the tribe in 2011 in anticipation of the eminent domain ordinance. The tribe said it wasn’t aimed at him, but former tribal Chairwoman Louise Benson later testified that Jin was the target.

The dispute turned bitter at times, with Jin accusing tribal members of embezzlement and fraud, and claiming that they invoked sovereign immunity to avoid producing financial records. An arbitrator dealt a blow to the tribe in August 2012 when he ruled that the tribe failed to keep adequate financial records, make those records available for Jin’s company to audit, pay business expenses of the Skywalk operation and pay management fees, which constituted a breach of contract.

The tribe appealed the more than $28.5 million judgment in favor of Jin but it forced the tribal business that operated the Skywalk to file for bankruptcy.

The arbitrator denied Jin’s request for millions of dollars for defamatory remarks he said were made by members of the Tribal Council. But Jin later filed a federal defamation lawsuit in Nevada against Counts, the tribe’s public relations firm and other tribal members. The public relations firm remains a defendant in that case.

The tribe routinely accused Jin of disparaging the Hualapai people with what it said were baseless lawsuits. At one point Jin apologized to the tribe after his former spokeswoman told a Las Vegas magazine that the tribal leadership was “lawless” and had an “archaic government.”

One aspect of the dispute involving what court has jurisdiction to hear arguments reached the U.S. Supreme Court in December with a denial to take up the appeal. Federal courts ultimately ruled that the contract was governed by Hualapai law.

Millions of people have visited the Skywalk over the years, and Jin helped bring many of them there through his tourism businesses. Attorneys for Jin’s company and for the tribe said Thursday they were pleased that the disputes have been resolved.

Jin’s wife, Yvonne, took over ownership responsibilities for his Grand Canyon Skywalk Development company after his death. Jin had invested $30 million to build the Skywalk.

“David cared for the Hualapai people and the natural beauty of the Grand Canyon,” Yvonne Tang said. “He would be so proud that people from all over Asia and the world will continue to appreciate the architectural marvel he created.”