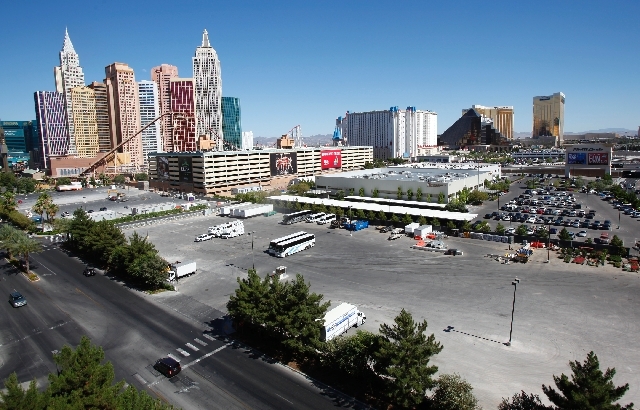 The space where MGM Resorts International is planning on building a$350 million, 20,000-seat arena, is seen from the Monte Carlo parking garage looking south, with the New York New York on the left. 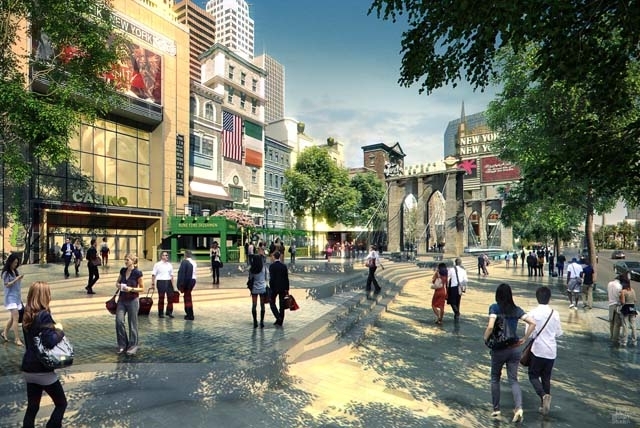 An artist's rendering shows retail, dining and entertainment offerings that will be adjacent to MGM Resorts' planned 20,000-seat arena near New York-New-York and Monte Carlo just off the Strip.

Populous, one of world’s powerhouse sports architectural firms, has won the job of designing MGM Resorts International’s proposed $350 million 20,000-seat arena slated for a site between New York-New York and Monte Carlo just off the Strip.

MGM and AEG will finance the project with equity contributions, plus third-party financing. No public dollars are being sought for the arena construction project.

Populous, formerly HOK Sport, has designed hundreds of stadiums, arenas and ballparks around the world including Marlins Park in Miami, the 2014 Winter Olympic Stadium in Sochi, Russia, the 2014 Asian Games Stadium in Incheon, Korea, and the Amway Center arena in Orlando, Fla.

“This project is exciting. We’ve been working with AEG on developing an arena in Las Vegas since 2007,” said Tim Romani, president of ICON Venue Group, the project management company that coordinated the architect selection process. “They finally landed with the best site and partnership. There’s a buzz around this project.”

While the arena does not have an NBA or NHL team lined up as an anchor tenant, the building will be designed and constructed to accommodate a big-league basketball or hockey franchise, Romani said Tuesday from his Denver office.

“The model is the Sprint Center” in Kansas City, Romani said. “We want to make it a great event center. Las Vegas is the event capital of the world and we want to make sure it will be optimal in handling any kind of event.”

Romani said Populous was “picked as the best fit” because the architectural company can deliver a “high quality” project on a tight budget. “They understand value-driven design,” Romani said.

The project is expected to take 22 months to build, with the first arena act to open in May 2016, Romani said. Romani managed construction of the Pepsi Center in downtown Denver, noting that arena went up in 19 months.

MGM, which also owns the 17,000-seat MGM Grand Garden and 12,000-seat Mandalay Bay Events Center, assumes the most prominent position in building the next major arena in Las Vegas.

Developer Chris Milam’s proposed arena in Henderson fell apart in 2012 when he said he could not get the NBA Sacramento Kings to re-locate.

Meanwhile, the city of Las Vegas’s agreement with The Cordish Cos. development company to build an arena in Symphony Park has not drawn any public plans and the exclusive deal between the city and Baltimore-based Cordish is scheduled expire by the end of 2013.

Populous has worked with AEG or ICON on more than 20 venue projects.

“Finalizing our agreement with AEG and selecting Populous, a world-class design firm, as the architect of this project are both important milestones in this process,” Jim Murren, MGM Resorts International chief executive, said in a statement.

“The combination of MGM and AEG, along with the excellent Las Vegas Strip location, is already driving interest from potential investors in this exciting new development,” Murren said.