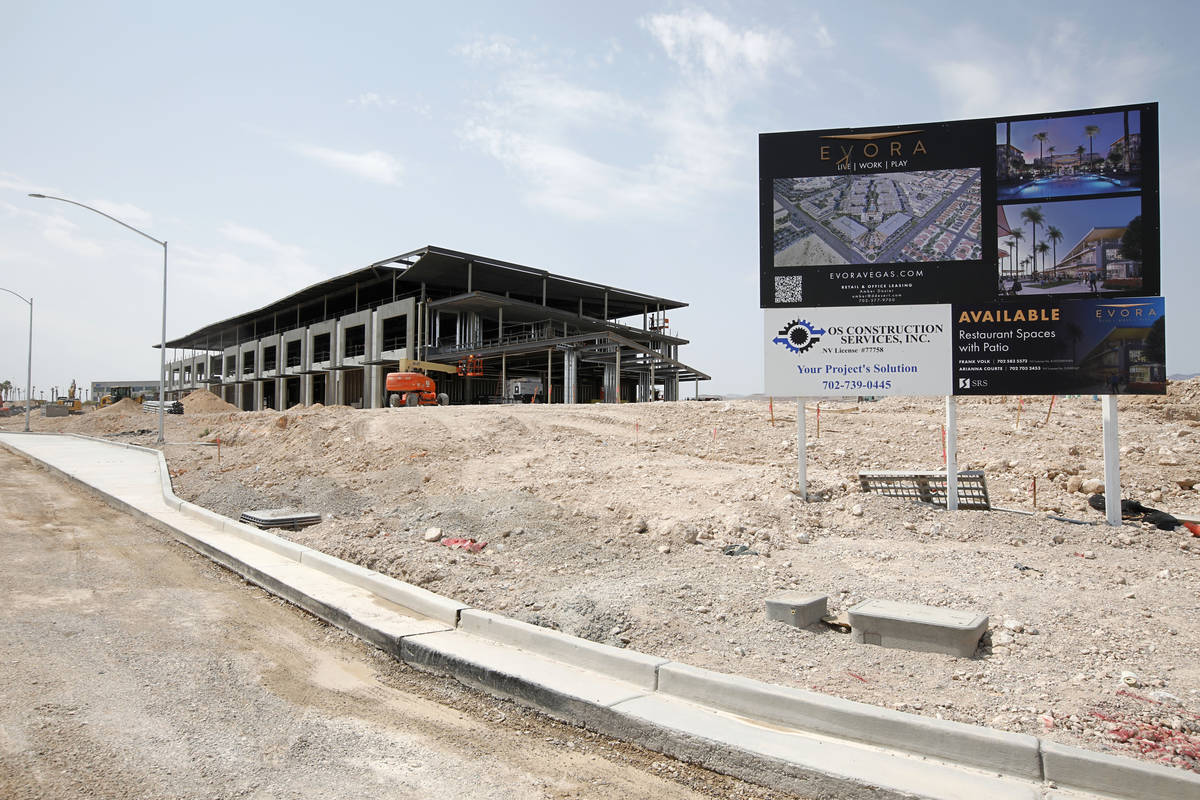 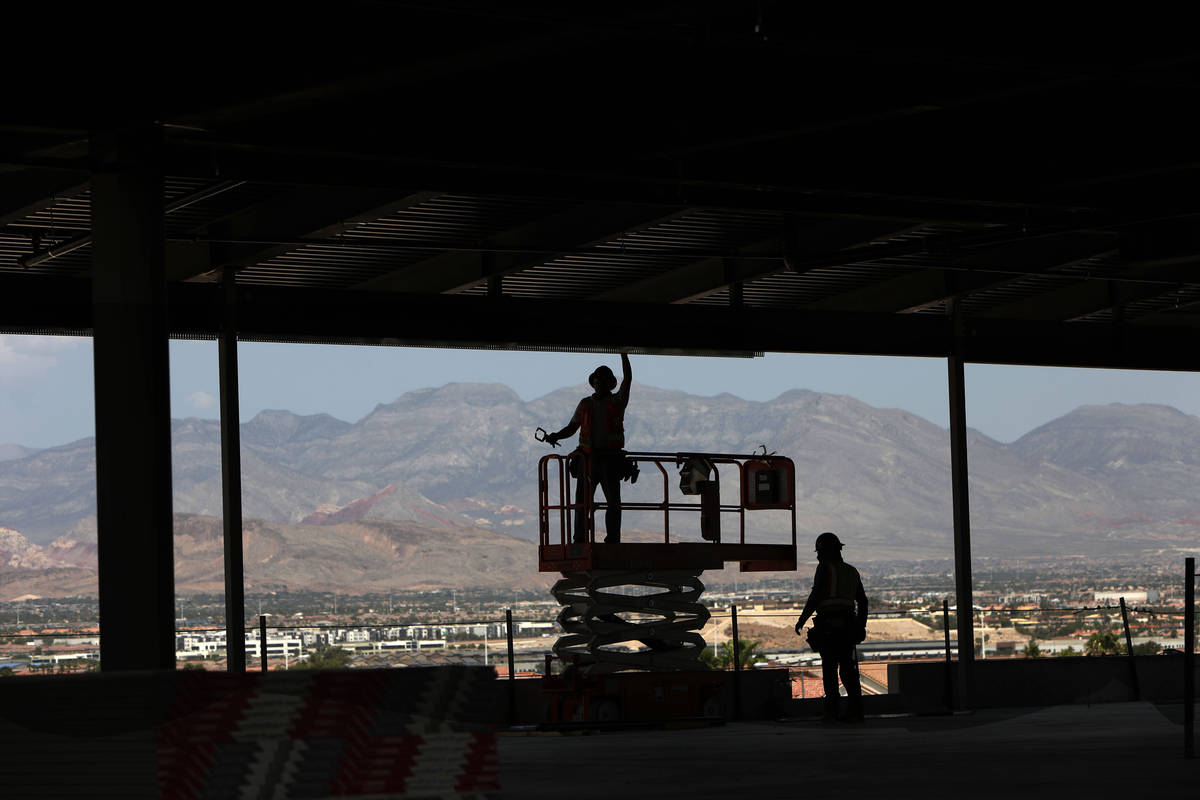 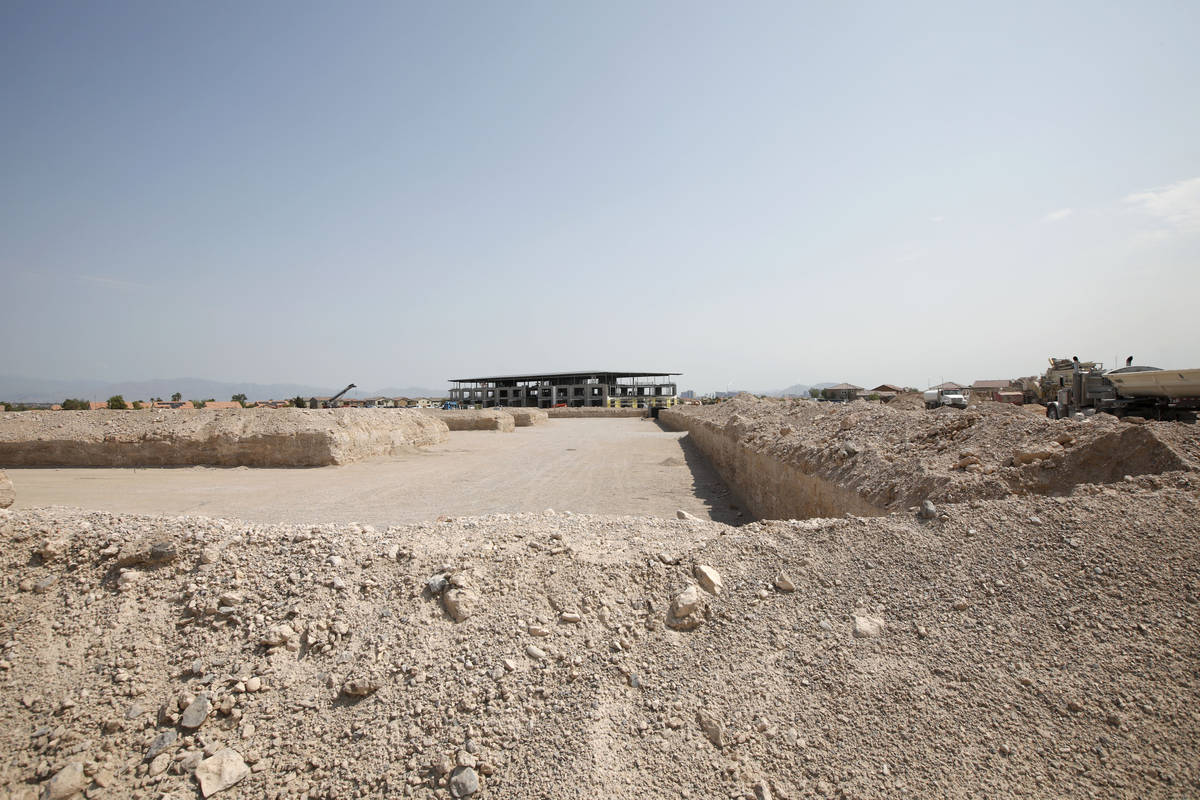 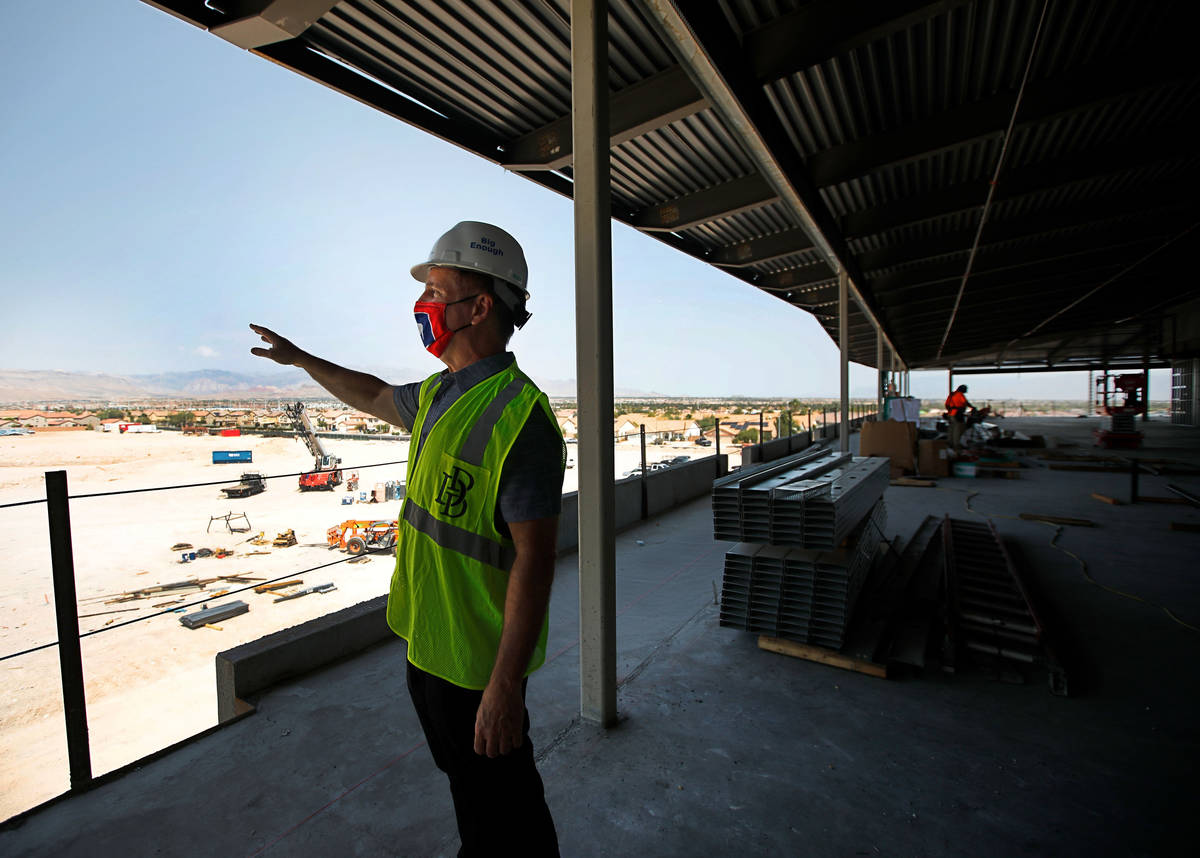 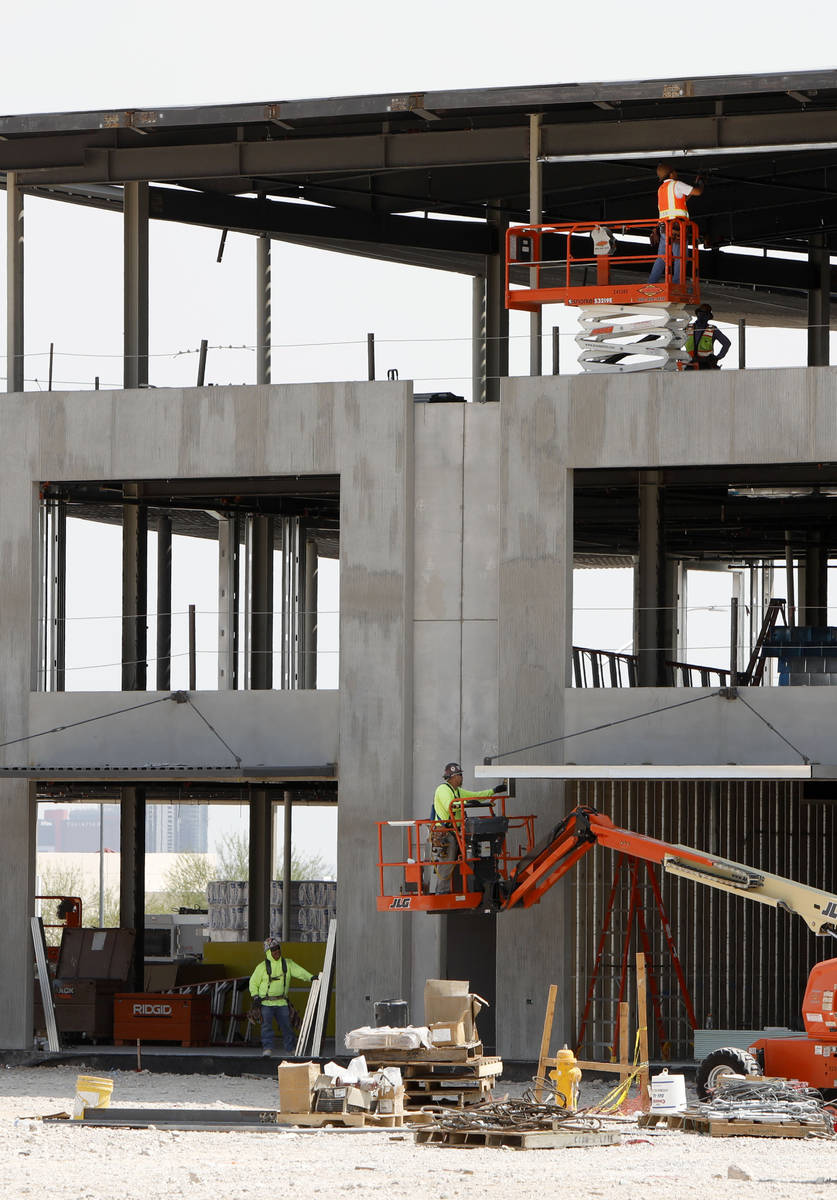 A view of the Las Vegas Strip skyline, as seen from the construction site of Evora, a 42-acre project along Buffalo Drive between Post Road and Patrick Lane in the southwest valley, Thursday, Aug. 12, 2021. (Chitose Suzuki / Las Vegas Review-Journal) @chitosephoto 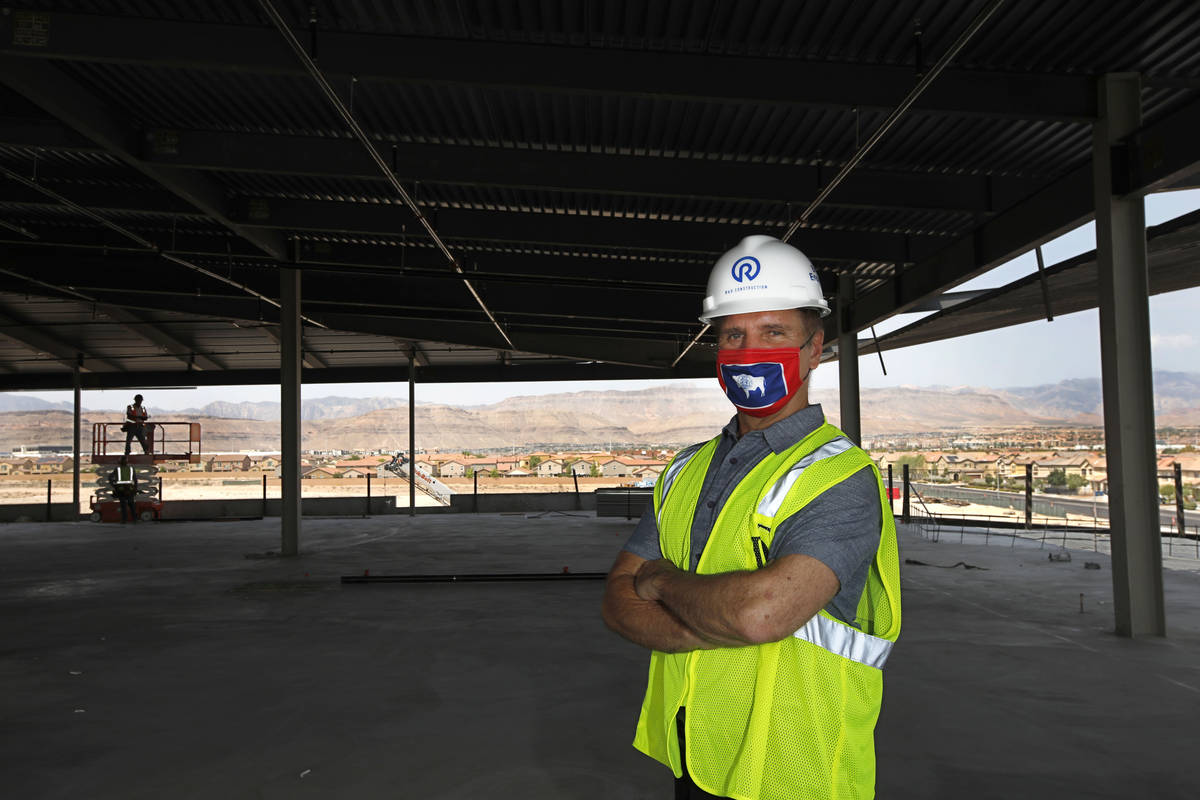 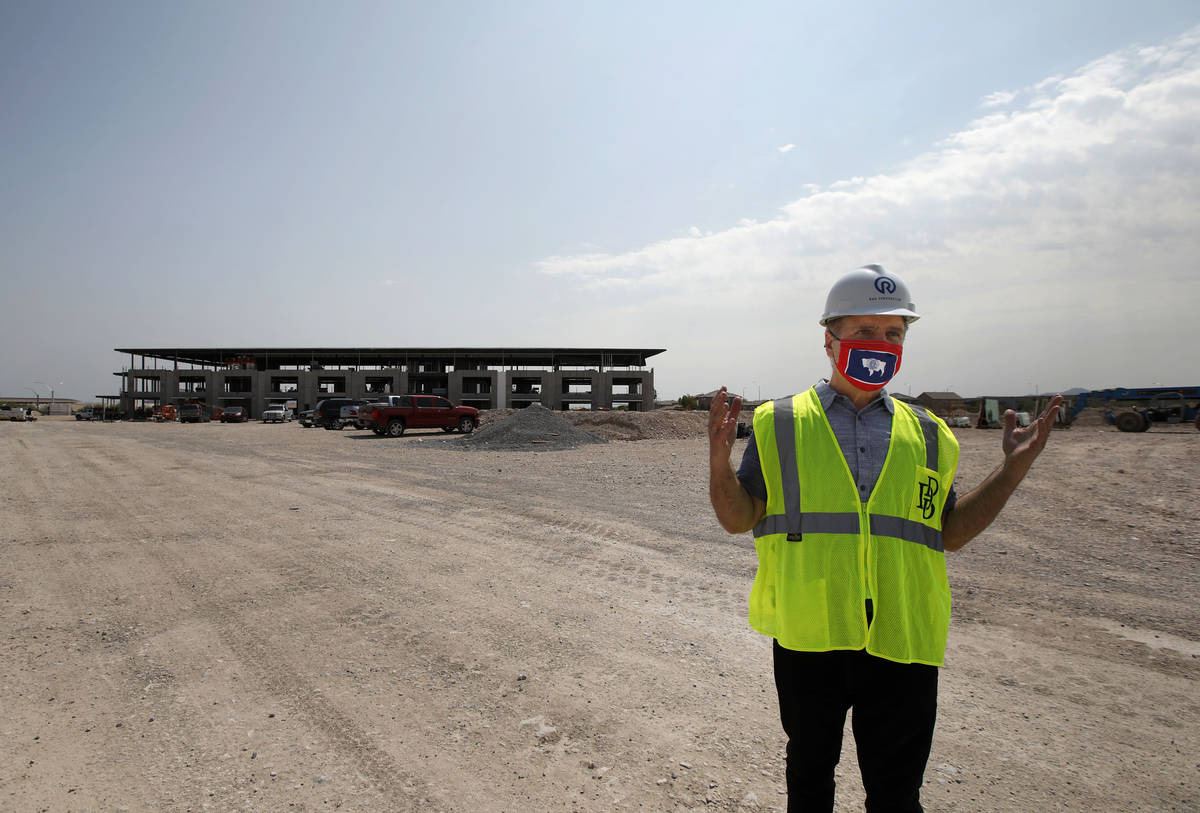 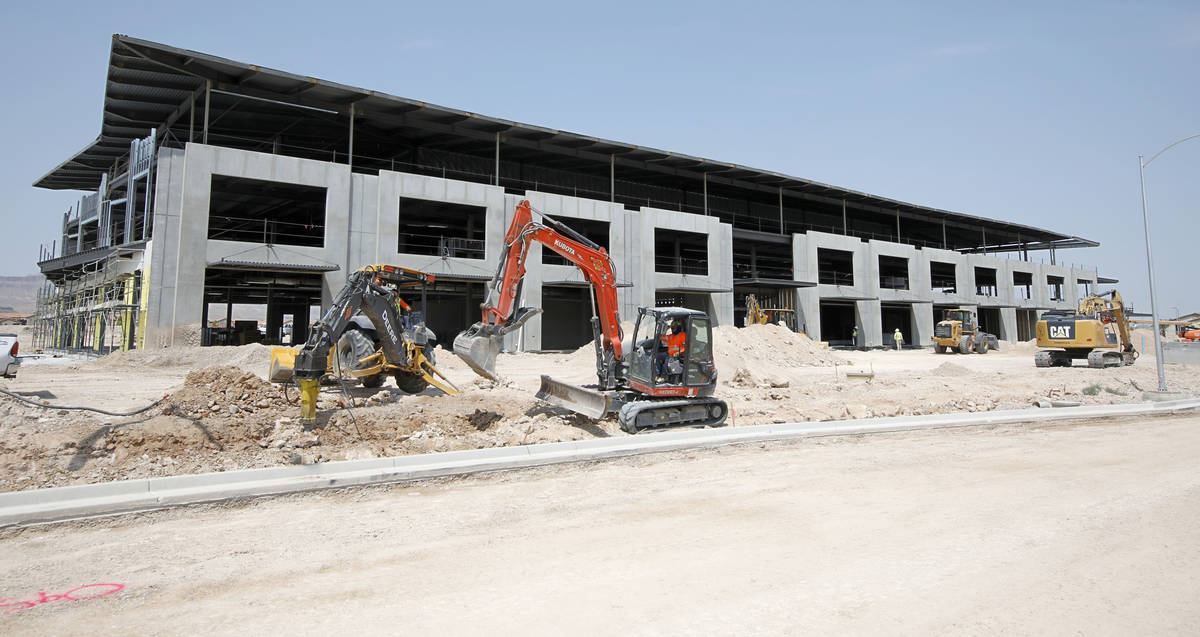 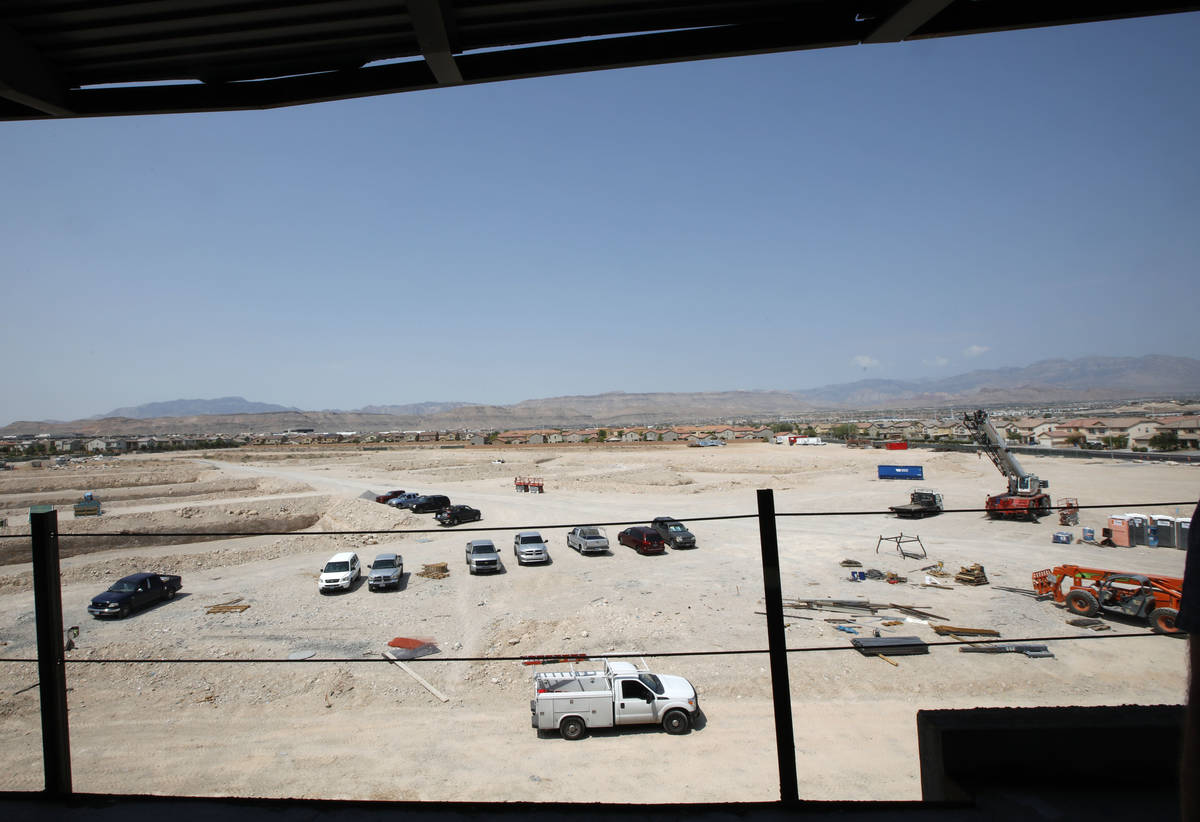 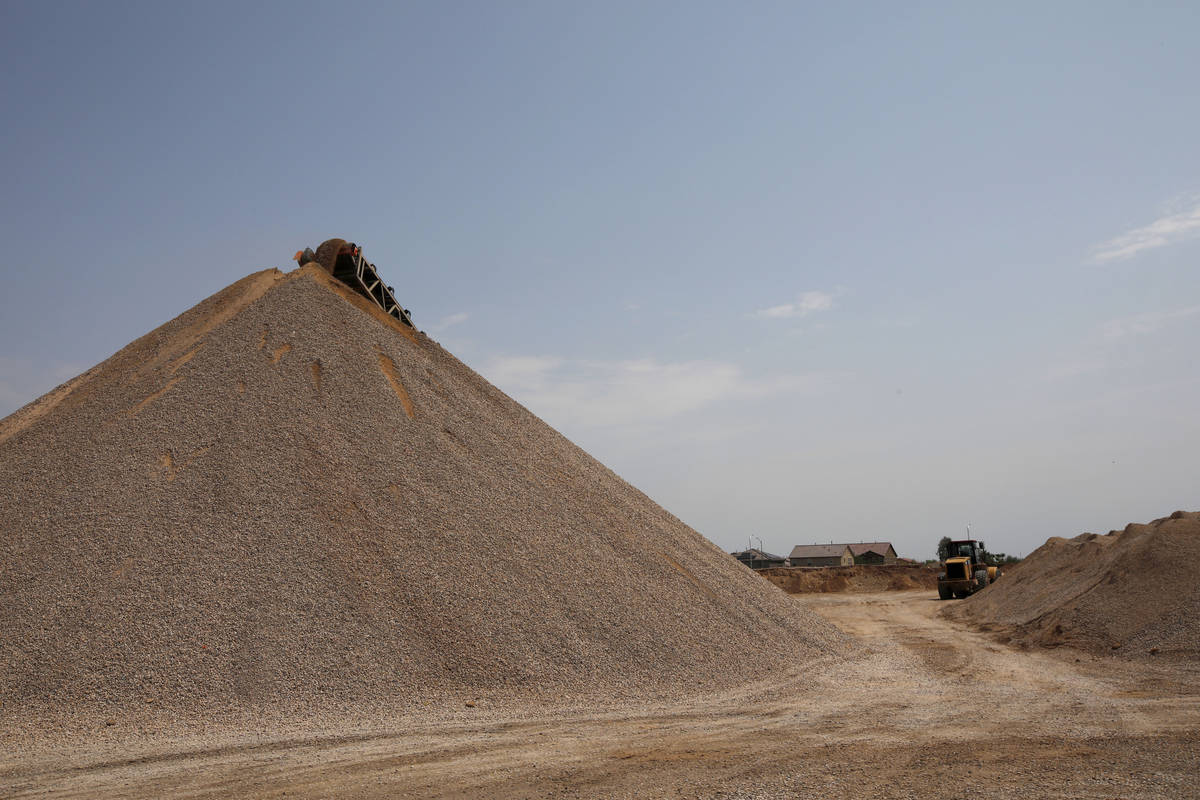 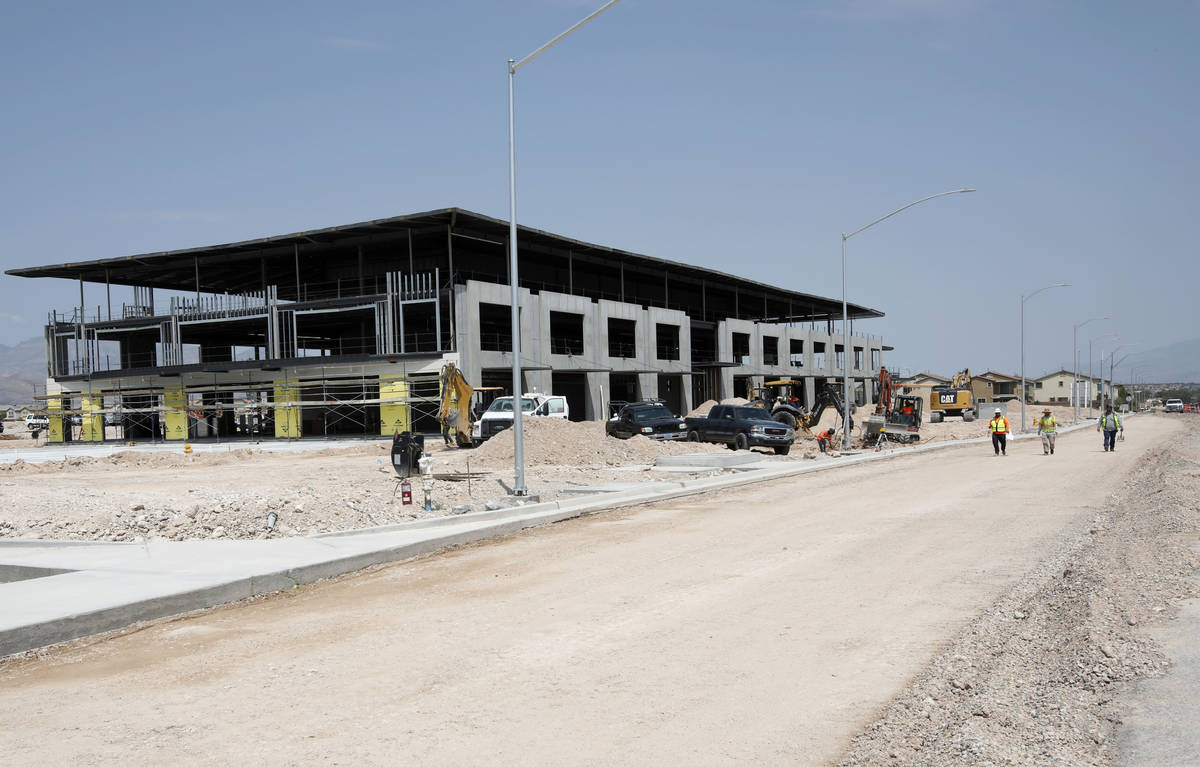 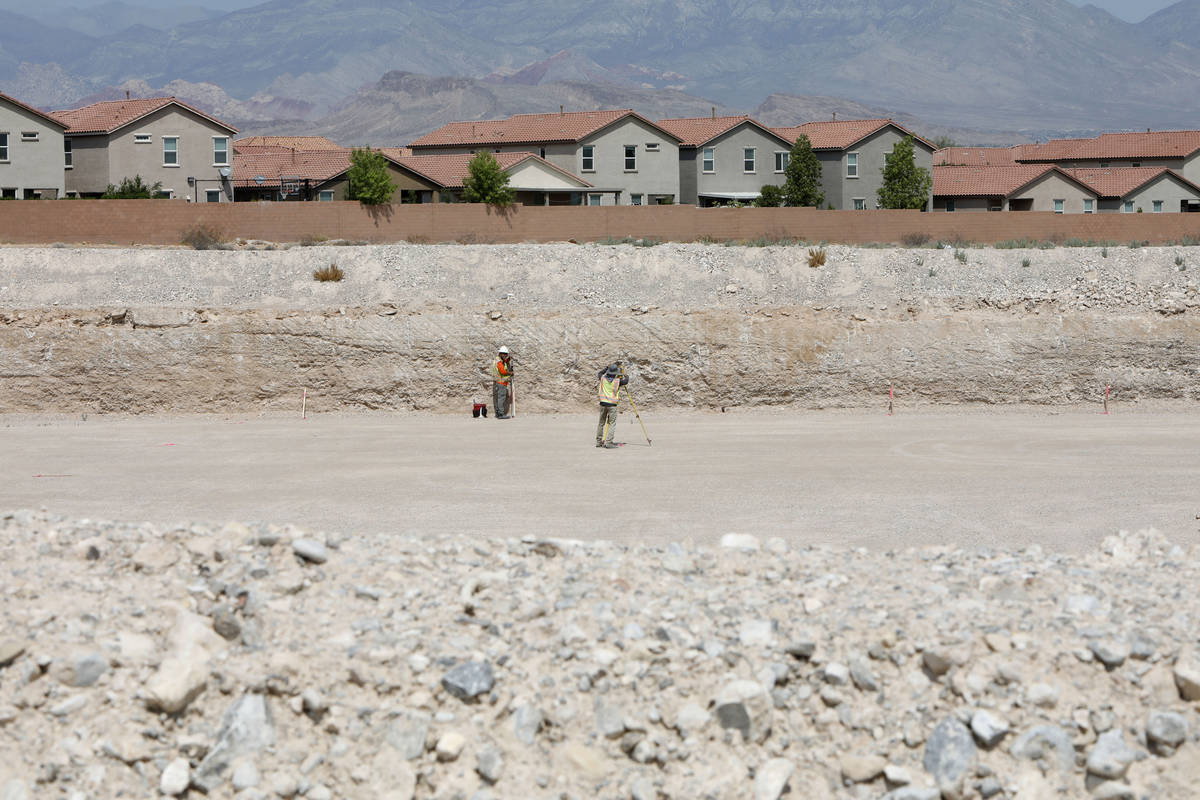 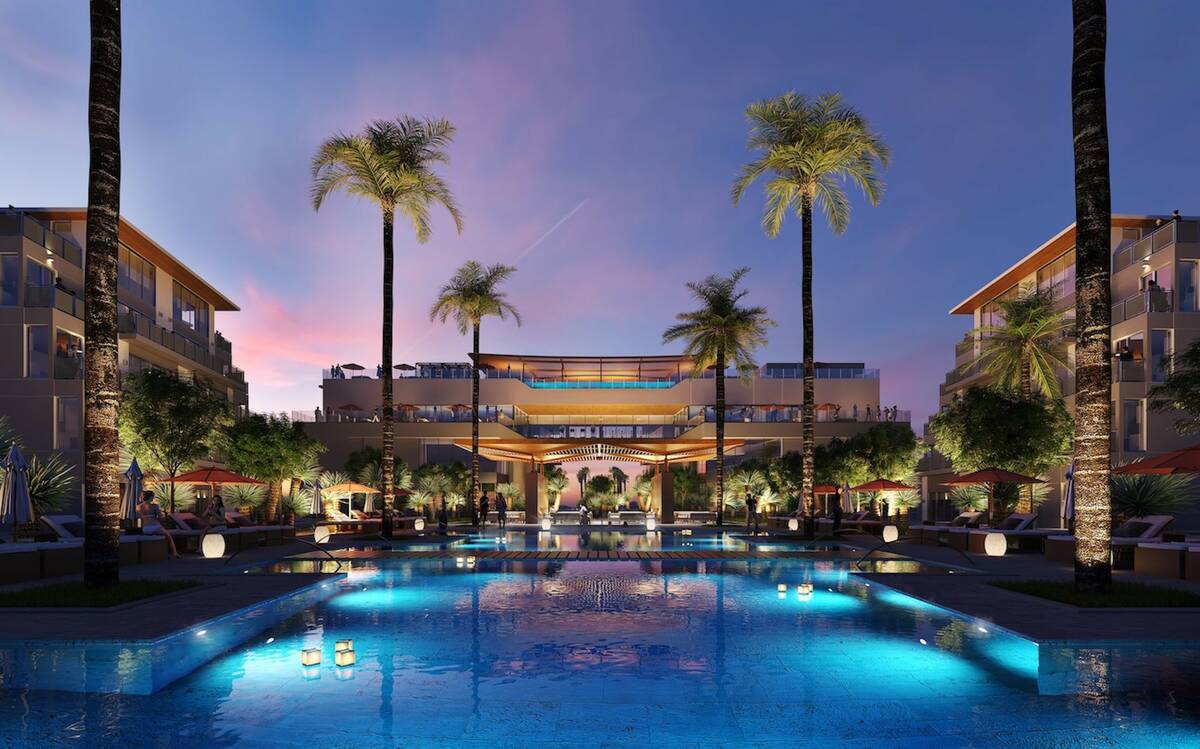 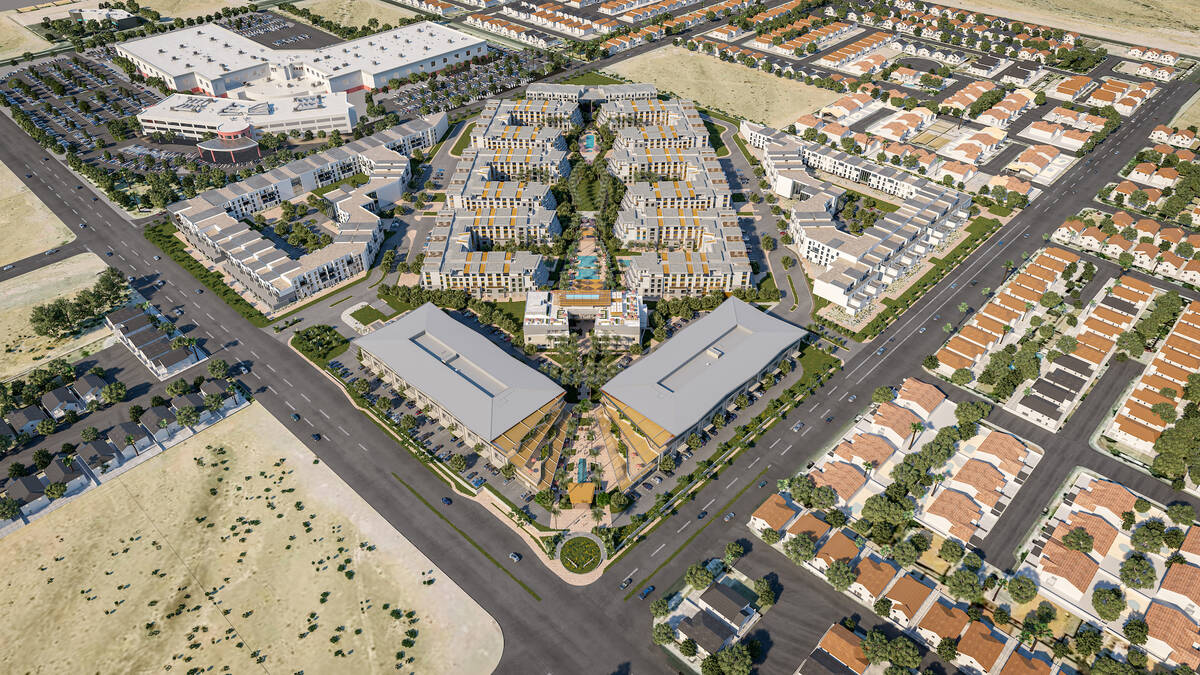 Like countless other projects in Southern Nevada, mixed-use developments ran into big problems after the economy crashed a decade or so ago.

Town Square Las Vegas and The District at Green Valley Ranch went into foreclosure. What’s now Downtown Summerlin was left as a partially built project off the side of the highway for years, and what’s now The Gramercy was an abandoned construction site surrounded by barbed wire-topped fencing.

Now, an unlikely developer is building a mixed-use campus in the southwest valley that is slated to feature apartments, office space, and eateries — and cost upward of $500 million.

Joe Sorge, who founded a company that produced gene analysis and cell biology products, and who boasts an executive producer’s credit for “Workin’ Moms,” a comedy show on Netflix, is building Evora, a 42-acre project on Buffalo Drive between Post Road and Patrick Lane.

Construction is underway on the project, which calls for 1,343 apartments, 240,000 square feet of commercial space and, rare for Las Vegas, underground parking.

Sorge, who also developed luxury apartment complex Evo and sold it shortly before the pandemic hit for more than $100 million, expects to finish Evora in five years.

He isn’t the only one developing a mixed-use project in Southern Nevada. UnCommons, also being built in the southwest valley by developer Matter Real Estate Group, is slated to feature office space, apartments and eateries on a 40-acre site.

But such projects aren’t widespread today, and for years, they were all but missing as Las Vegas’ construction industry recovered from its near-wipeout during the Great Recession.

In an interview at his project site last month, Sorge said that one risk in building a mixed-use complex is the possibility that the developer can’t lease it up because of a soured economy.

Another is that the tenants go bankrupt and can’t pay their rent.

“You never know,” Sorge said. “It’s so hard to predict the economy. But to me, the fundamentals are just so ripe here.”

He also acknowledged that a mixed-use project — a more complicated venture than a typical apartment complex — is tougher to finance.

Sorge noted that he was paying for Evora’s first commercial building, a three-story, steel-frame structure, without an outside construction loan.

Many people have been working from home over fears of the outbreak, sparking discussions about how much office space companies really need. Las Vegas’ apartment sector has seen higher rents, tighter vacancies and more construction, but many tenants tapped unemployment benefits or other relief programs to pay their rent amid huge job losses in the casino-heavy region.

Sorge said that he has leased 22,000 square feet at Evora for a medical “spa” and training center, whose clinic would offer Botox injections, laser hair removal, eyebrow sculpting and the like. More tenants are in the pipeline, he added.

Plenty of people have also moved to Las Vegas amid the pandemic to work remotely in larger, less expensive homes. Such tenants “don’t even blink an eye” when apartment landlords charge $2 to $2.50 per square foot, a pricey rate that was “unheard of in Vegas six or seven years ago,” Sorge said.

Amenities are slated to include a performance pavilion, a 1-mile perimeter walking trail, saunas and steam rooms, pickleball and tennis courts, and a yoga studio.

The total project cost will be as much as $500 million, he said.

Building an underground garage is expensive but will allow more space for amenities that would otherwise be eaten up by parking, and Sorge is banking that he can land high-enough rents to cover the cost of his subterranean structure.

Sorge, who grew up in New Jersey, graduated from Massachusetts Institute of Technology in 1975 with bachelor’s degrees in biology and chemistry and from Harvard Medical School in 1979, according to a securities filing, which also says he was a resident surgeon at Brown University from 1979 to 1980.

Sorge previously told the Review-Journal that he considers himself more of an inventor and, when determining his medical career, went into research.

His business ventures have included biotech firm Stratagene Corp., which he sold for around $250 million in 2007. That same year, property records show, he bought an 8,702-square-foot house in Summerlin for more than $7.7 million.

He also ventured into the film industry.

Sorge said last month that he moved to Las Vegas amid a custody fight over his now-adult son Danny, a project coordinator for Evora. He wanted to pursue some hobbies after selling the molecular biology business, he said, and looked to buy a few acres of land to build a recording studio.

Instead, a broker found closer to 20 acres, explaining the plot was in foreclosure and selling at a steep discount to what a prior owner paid.

Sorge bought the site. He also scrapped the studio idea and, amid an apartment construction boom in Las Vegas, built a rental property of his own, called Evo.

The project, on Patrick Lane near Durango Drive in the southwest valley, features a rooftop pool and lounge, cabanas, an indoor basketball court, spin classes, steam and sauna rooms, and other amenities.

Sorge broke ground on Evora before the pandemic hit. But he indicated that he stopped construction for a few months after the coronavirus outbreak upended daily life to “regroup” and figure out how to proceed. He initially planned to build apartments first but opted to start with commercial space instead.

“Who predicted COVID, right?” he said.