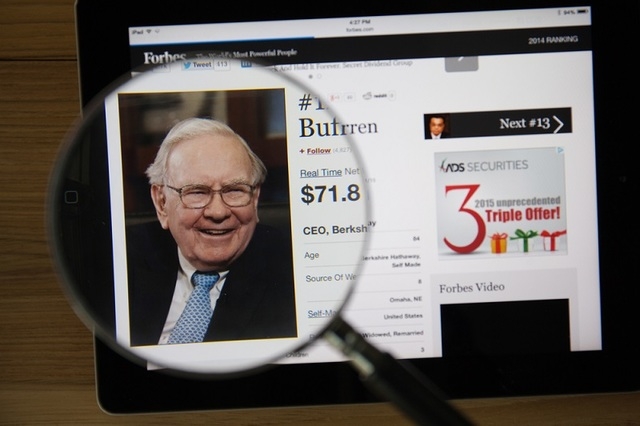 As a self-made billionaire, Warren Buffett has plenty of firsthand knowledge about what it takes to achieve success. So when Buffett gives advice, people listen. But for those about to leave college to start careers, this advice could prove particularly valuable and help the graduates get a sense of where they should be going and how fast they can get there. Below are the 14 best pieces of advice he has given to students and young people.

1. Invest in Yourself First

As a star investor, Buffett knows where to find true value, and the first place he tells students to look for it is within. “Investing in yourself is the best thing you can do — anything that improves your own talents,” Buffett said in a 2009 interview on “Good Morning America.”

Investing in yourself is one of the only investments over which you can have total control and can never lose. “If you have true talent yourself, and you have maximized your talent, you have a terrific asset,” he said.

At a 1998 lecture at the University of Florida School of Business, he asked the students in the audience to think of someone in their class who had the makings of success, such that the audience members would want to get 10 percent of that person’s earnings for the rest of their lives. “You would probably pick the one you responded the best to, the one who has the leadership qualities, the one who is able to get other people to carry out their interests,” said Buffett. “That would be the person who is generous, honest and who gave credit to other people for their own ideas,” — in short, the person who exhibited integrity.

Buffett said bad habits often hold people back: “I see people with these self-destructive behavior patterns at my age or even 20 years younger, and they really are entrapped by them.”

For those who are young, however, it is still relatively easy to identify those poor qualities and work to improve them, Buffett told the students at University of Florida: “You can get rid of it a lot easier at your age than at my age, because most behaviors are habitual. The chains of habit are too light to be felt until they are too heavy to be broken.” Everyday habits can help successful people push harder and get further than others.

4. Know Your Strengths and Capitalize on Them

Buffett told Georgia State students in 2001 that it’s important to know your limits and not stray too far from them. In fact, Buffett’s investment philosophy is centered on putting his money where his knowledge is.

“You don’t have to be an expert on everything, but knowing where the perimeter of that circle of what you know and what you don’t know is, and staying inside of it is all important,” he said. “Tom Watson Sr., who started IBM, said in his book, he said, ‘I’m no genius. But I’m smart in spots, and I stay around those spots.’ And, you know that is the key. So if I understand a few things and stick in that arena, I’ll do OK.”

5. Don’t Risk What You Have and Need for What You Don’t

Buffett told University of Florida students that in his decades as an investor he has sometimes seen businesses put themselves at risk to chase after bigger and bigger profits, and has seen people do that at the individual level as well. “If you risk something that is important to you for something that is unimportant to you, it just doesn’t make sense,” he said. “I don’t care if the odds you succeed are 99 to 1 or 1,000 to 1 that you succeed.”

“I get to work in a job that I love, but I have always worked at a job that I loved,” Buffett said of his investing career. It isn’t just about the money for him, either: “I loved it just as much when I thought it was a big deal to make $1,000.”

“You really should take a job that if you were independently wealthy that would be the job you would take,” Buffett told University of Florida students. “You will learn something, you will be excited about, and you will jump out of bed. You can’t miss. … When you get out of here take a job you love, not a job you think will look good on your resume. You ought to find something you like.”

“Be a nice person,” Buffett once advised a young MBA student. “It’s so simple that it’s almost too obvious to notice. Look around at the people you like. Isn’t it a logical assumption that if you like traits in other people, then other people would like you if you developed those same traits?”

8. Take Care of Your Body and Mind

Buffett often shared this fable, as quoted in his biography, “The Snowball: Warren Buffett and the Business of Life,” asking students to imagine if a genie came to him at 16 and offered him the car of his dreams, but the catch was that it would also be the last car Buffett could ever own. The car would have to last a lifetime, and to make sure that happened, he said, “I would read the manual about five times. I would always keep it garaged. If there was the least little dent or scratch, I’d have it fixed right away because I wouldn’t want it rusting. I would baby that car, because it would have to last a lifetime.”

Then Buffett related the fable back to the students: “That’s exactly the position you are in concerning your mind and body. You only get one mind and one body. And it’s got to last a lifetime. Now, it’s very easy to let them ride for many years. But if you don’t take care of that mind and that body, they’ll be a wreck 40 years later, just like the car would be.

Buffett’s success is due in large part to his own particular set of talents, drives and knowledge. But it was the help of a mentor, Benjamin Graham, that set Buffett on the investment philosophy that he grew upon to build a multibillion-dollar empire. Buffett read Graham’s book and applied to Columbia University, where Graham taught. He developed a relationship that led to Buffett getting a job offer from Graham after graduation.

10. Work for and Surround Yourself With People You Admire

In addition to Graham, Buffett has always sought to work with talented and hard-working people. “You know, people always say, ‘Well who should I go to work for when I get out then?’ … The real thing to do is to get going for some institution or individual that you admire,” Buffett advised Georgia State students in a 2001 speech.

“It’s better to hang out with people better than you,” Buffett said on another occasion in response to a high school student’s request for advice on how to be successful. “Pick out associates whose behavior is better than yours and you’ll drift in that direction.”

“I used to be afraid of public speaking, and I realized that I’d have to do that someday,” Buffett told a group of MBA students, according to Business Insider. Knowing he couldn’t avoid this task forever, no matter how unsavory it might seem to him, Buffett was proactive: “I do have one diploma I display from Dale Carnegie’s public speaking course, and it only cost me $100.” Choosing to face what he was afraid of led Buffett to make a huge change, and today his speeches are listened to and quoted by millions.

Bill Gates said that one of the biggest lessons he’s learned from Buffett is to be careful with his time. “There are only 24 hours in everyone’s day. Warren has a keen sense of this. He doesn’t let his calendar get filled up with useless meetings,” Gates once wrote. The best part of time is that even the poorest new college graduate has as much of this resource as the world’s richest men, and how it’s used can help push you to success.

14. Seize Opportunities While You Can

“Big opportunities in life have to be seized,” Buffett said in that Georgia State address. “We don’t do very many things, but when we get the chance to do something that’s right and big, we’ve got to do it. And even to do it in a small scale is just as big a mistake almost as not doing it at all.

“You’ve really got to grab them when they come, because you’re not going to get 500 great opportunities.”

From GobankingRates.com: Warren Buffett’s 14 Best Tips for the Class of 2015