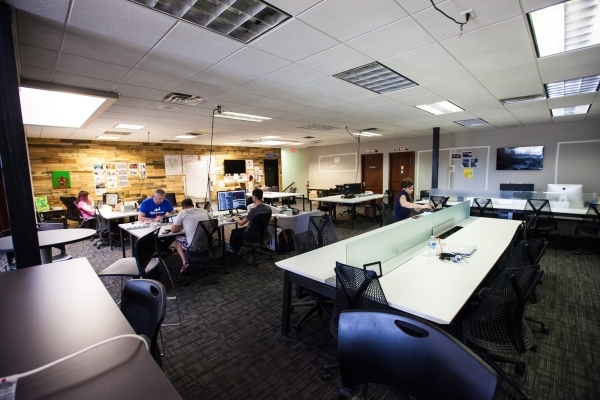 People work in open office spaces at Work in Progress, 317 6th St., in downtown Las Vegas on Tuesday, May 5, 2015. Work in Progress, which offers work stations and and startup services for individuals and businesses through various membership levels, has informed its clients it will close March 31. (Chase Stevens/Las Vegas Review-Journal Follow Chase Stevens on Twitter @csstevensphoto)

Another Downtown Project-invested business is closing.

This time, Work In Progress, a workspace-sharing business that provided services to members of start-ups and other small groups, is closing March 31 after about three years.

On Feb. 1, George Moncrief, who oversees the work space operation, sent an email to Work In Progress members about the March 31 closing. The site is at 317 S. Sixth Street in downtown Las Vegas near the courthouses and Fremont Street area.

“When Work In Progress opened in 2013, its mission was to create a space and a supportive environment for startups and budding entrepreneurs to work,” Moncrief wrote.

“It aimed to serve the community and needed to be profitable in order to be sustainable over the long-term. As options for affordable workspace in Las Vegas grew, WIP was among the only spaces in the city that depended exclusively on membership revenue to survive,” he wrote.

“Not having achieved that target in three years, we’ve decided to close it,” Moncrief said.

Moncrief referred his members to other workspace options such as Co-OperateOn and Switch.

He wrote that both “are among those that provide excellent workspaces at affordable (and occasionally free) rates.”

Moncrief included a FAQ and workplace site list for his clients.

At first, Work In Progress focused on offering space for tech-oriented companies such as app developers but eventually a broader group of businesses such as graphic designers signed on.

“It seemed kinda busy, so it took me by surprise,” said Kevin Williams, one of five workers for MAX CDM, a Los Angeles-based content delivery company.

“It’s a great place. It’s downtown and walking distance to everything,” Williams said.