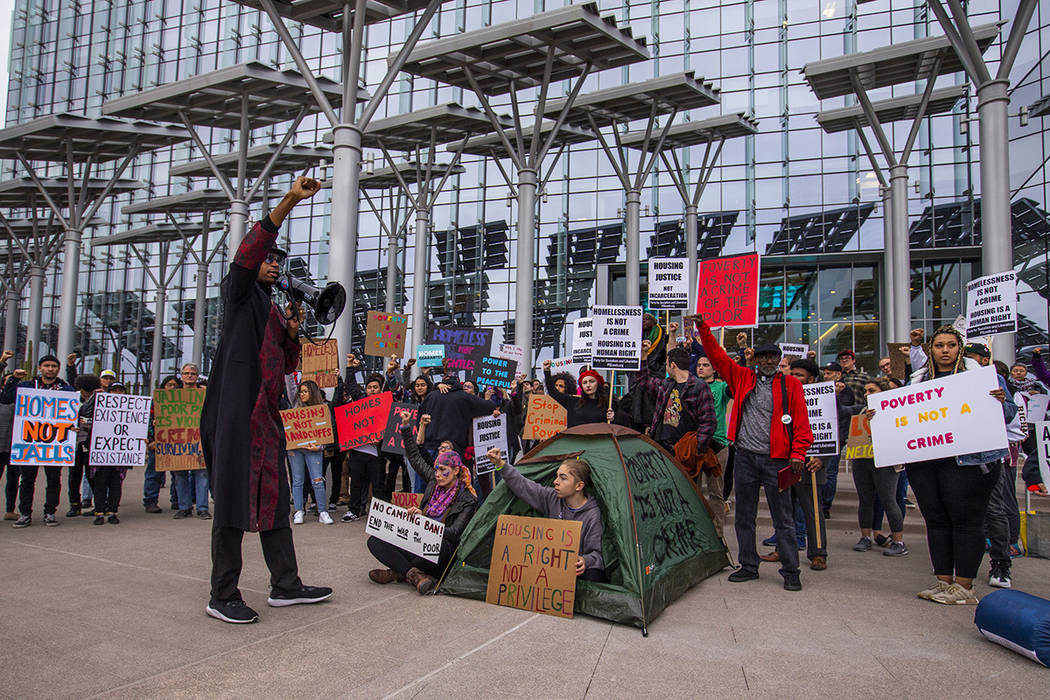 Minister Stretch Sanders fires up the crowd as local activists rally at the Las Vegas City Hall then march to the Fremont Experience in protest of the city council's camping and street cleaning ordinances on Monday, Jan. 20, 2020, in Las Vegas. (L.E. Baskow/Las Vegas Review-Journal) @Left_Eye_Images

Lt. Danielle Davis from the Las Vegas Department of Public Safety said that the homeless represent about 10 percent of the overall city jail population, though she presented an example that showed the rate was just over 15 percent of the total of 33,338 inmates who passed through the city’s jail last year.

Both facilities also detailed the assistance and resources they provide to inmates who accept the help.

“We don’t want anyone to fall through the cracks, so that’s our goal,” Davis said. “We’re trying to provide wraparound services while you’re in custody to the best of our ability.”

The presentations were made to a regional working group of local government officials and nonprofits that are spending this year looking for cooperative approaches to address the issue of homelessness and new sources of funding that could help attack it.

Thursday’s meeting came a little more than a week before the Feb. 1 deadline the city of Las Vegas set to begin enforcing a controversial ordinance passed in November that will make it a misdemeanor to sleep on the streets downtown and in residential areas while there is space in shelters.

At both jails, officials said, inmates go through an assessment, usually within 12 hours of being booked, where they can identify themselves as homeless and can be referred to social services.

In October, discharge planning was “taken to another level” at the city jail when the city entered a contract with NaphCare Inc., which helps correctional facilities manage their health-care needs.

The average stay at the detention center is about 10 days. During that time, NaphCare employees use the county’s coordinated Homeless Management Information System to help connect inmates with services and the medication that they need, company representative Breana Givens said.

While in custody, inmates can meet with psychiatrists for substance abuse and mental health services and receive job training through the Foundation for an Independent Tomorrow. Givens also identifies specialty courts that might be able to help inmates with their case, with an emphasis on veterans.

In October, service providers also began holding regular community resource fairs in the city jail to meet prospective clients before their release, Davis said. The next one will be held in April and will focus primarily on the homeless population, she said.

The goal of the outreach is to reduce the recidivism rate of homeless inmates by 20 percent within the next three years and to create more detailed data tracking to assist with housing placement and supportive service. Davis said the recidivism rate is currently between 25 and 27 percent.

“We’re going to continue to build on it to see what works and doesn’t work,” Davis said.

Givens said that since the beginning of the year, inmates also have been provided with resource sheets and flyers with the closest shelters.

The city has a Multi-agency Outreach Resource Engagement (M.O.R.E.) team with Metro officers that navigates downtown Las Vegas to connect the homeless with services.

The Clark County Detention Center also has been bolstering its services for the homeless, including creation of a new Homeless Outreach Team. In 2019, the jail also put on six resource fairs.

Of the 340 who participated in last year’s fairs, called CCDC Cares, 66 — or about 19.5 percent — have reoffended, Barrowes said.

On Wednesday, 105 inmates attended a CCDC Care fair and engaged with 34 community partners, he said. They received help obtaining birth certificates, employment and health assessments, substance abuse counseling and housing assistance. Barrowes said that officials will follow up with inmates who provide their contact information.

“Around this time last year, we realized that there was a lot of people with a lot of need, and no one really knew where to turn in our population, or a lot of people didn’t,” he said.

“The causes of people to be rearrested are very similar to the causes of homelessness,” he said, referring to mental illness and substance abuse, lack of access to housing, lack of overall support and unemployment. “They go hand in hand.”