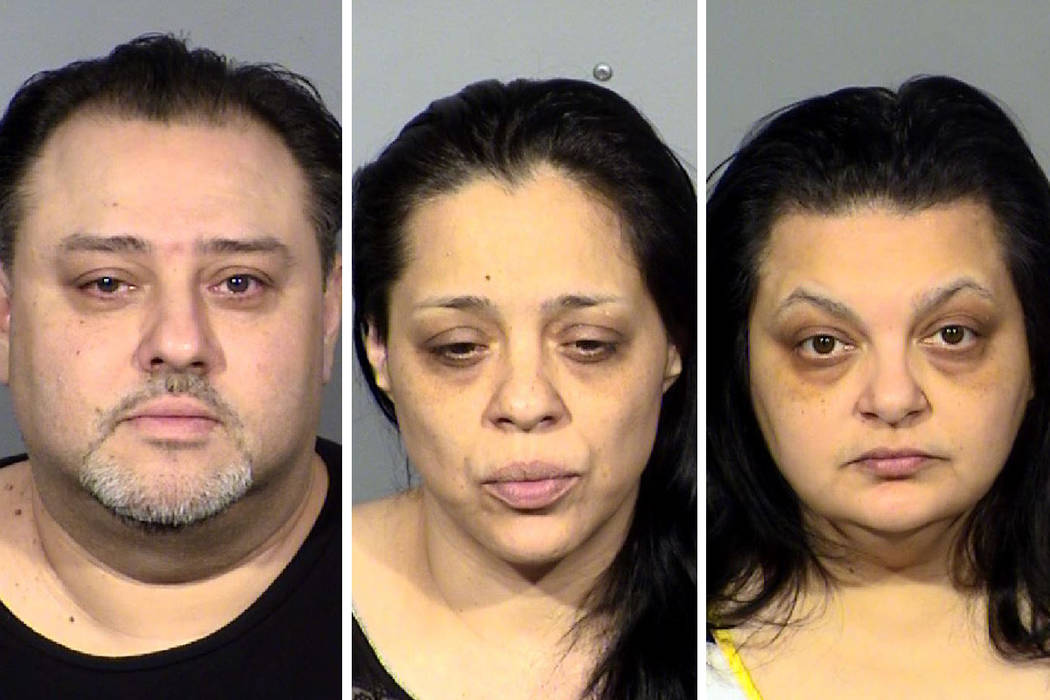 A lawyer was steadily swindled out of $1.5 million after authorities said she responded to a flyer for “Psychic Readings” she found on the door of her Summerlin home.

Now three people with the same last name — Sherry Marks, 52, David Marks, 48, and Peaches Marks, 43 — are facing felony charges and the prospect of decades behind bars in what police have described as an elaborate, monthslong scam that netted cash, jewels, airfare and a pair of white-on-white $130,000 BMWs.

Prosecutors have been given until early June to file a criminal complaint against Peaches Marks, but Sherry and David Marks are due back in Las Vegas Justice Court later this month. They are charged with conspiracy, extortion and four counts of obtaining money under false pretenses.

More than a year ago, Stacey Tokunaga, an attorney who runs a firm under her own name and focuses on workers compensation law in California and Nevada, called the number she found on the flyer for a tarot card reading, according to court papers. She was told “her chakras were off balance” and was quoted $1,500 for a “chakra clearing.”

By May 2018, she lost hundreds of thousands of dollars in cash alone. The Las Vegas Review-Journal’s attempts to reach Tokunaga have been unsuccessful.

After Tokunaga agreed to pay the cleansing fee, she was told she needed a “white singing bowl to clear her energies,” records stated. That bowl, along with a journal to document the session, would cost her $30,000, which she paid.

Investigators later found a similar bowl and journal on Amazon for $18.

The so-called psychics offered Tokunaga a black cloth, told her to place it over a Mason jar filled with water, slide it under her bed and sleep for a night.

Tokunaga woke up and the water had turned red. She immediately called the psychics’ number, and she was told that in order to “fix the rooted evil in her bloodline,” she would have to “trace it back to fix all of (her) problems.”

She agreed to finance a trip for David Marks and his girlfriend, identified in a criminal complaint against him as Rita Stevens, to New Orleans. Stevens has not been charged in the case.

A lawyer for David Marks, Betsy Allen, said she could not comment on the case.

According to a police report, when David Marks and Stevens returned from New Orleans in late June, after about a week, they told the victim: ‘Your dad says he’s sorry he didn’t believe in you when you were a kid and he feels really bad.”

Tokunaga was convinced she needed to purchase another $30,000 book to “document and log her transformation.” She paid in cash, records stated.

She also was persuaded to believe that “to truly clear this bad karma” she had to purchase two white BMW 7 Series sedans with white leather interior, according to the documents.

In late 2017, Sherry Marks, using the alias Paula Williams, told Tokunaga that her “life was in jeopardy,” and insisted on “cash payments incessantly,” collecting upward of $500,000 that Tokunaga pulled from her firm’s coffers and a line of credit, according to a police report.

Sherry Marks demanded Tokunaga’s credit card, which was used to purchase airfare and shopping sprees, and continued to ask for more money. After Tokunaga told her that she was “tapped out financially,” the police report stated, Sherry Marks said “all of this work was going to be for nothing unless she gets more money.”

Tokunaga then handed over $350,000 worth of heirloom jewelry, the report stated, before writing checks to cover the costs. An accountant for Tokunaga’s firm later discovered the missing funds and reached out to authorities.

Sherry Marks and her daughter, 32-year-old Peaches Marks, also face a dozen counts of theft and one count of fraud in a separate case. According to Las Vegas police, the pair persuaded a woman who hoped “for a husband and a happier life” to pay them upward of $180,000 in late 2017.

The pair spent the money on jewelry and clothes, while convincing the woman that she was sick “and could possibly die from the sickness,” a police report stated. When the woman told her she could no longer afford to pay them, Sherry Marks said she “would be very sick, never have a child and be completely alone.”

In fear for her life, the report stated, the woman called police.

While Sherry Marks was being detained as of last week on $40,000 bail, David Marks and the elder Peaches Marks have been released from custody.

It’s unclear whether Sherry Marks’ daughter was arrested on charges related to the 2017 allegations, though a judge issued a warrant in September.

In court earlier this month, the 43-year-old Peaches Marks told Las Vegas Justice of the Peace Ann Zimmerman that authorities had picked up the wrong woman.

“It was not me,” she said while still in custody. “It’s a different Peaches Marks.”

Since prosecutors have yet to file a criminal complaint against her in connection with the theft from the attorney, the judge released her but ordered her back to court next month.

“I’m still not that Peaches,” she pleaded. “It’s a different Peaches.”

Zimmerman quipped: “Because there are so many Peaches Marks in the world.”

David Fischer, the defendant’s lawyer, told the Review-Journal that he was unfamiliar with the allegations involving the attorney.

The defendant said she was born in Washington, D.C., and that her niece has the same name.

An online listing for a 43-year-old Peaches Marks shows that she last resided in Las Vegas in March. She also has lived in Alabama, Florida, Hawaii, Massachusetts, Michigan, North Carolina, New York, South Carolina, Texas, Virginia and the Virgin Islands.

“But I’m not the one that you guys are looking for here,” she insisted to the judge. “It’s a different Peaches.”

Zimmerman told her: “Just make sure you return to court in 30 days because you’re the one they arrested, OK?”

“I know,” the woman replied.