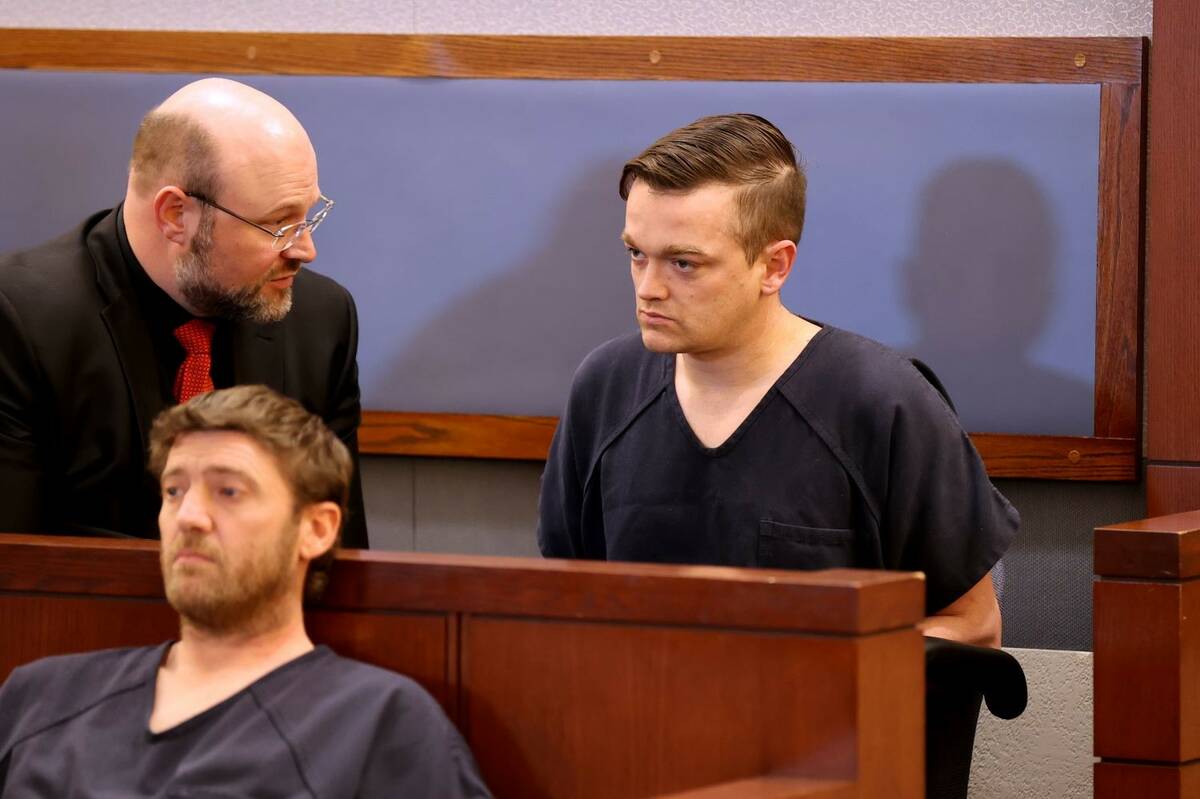 Brandon Toseland, right, confers with his attorney, Augustus Claus, in court at the Regional Justice Center in Las Vegas on Thursday, April 7, 2022. Toseland is charged with murder in the death of his girlfriend’s 4-year-old son, Mason Dominguez, whose body was found in a freezer. (K.M. Cannon/Las Vegas Review-Journal) @KMCannonPhoto 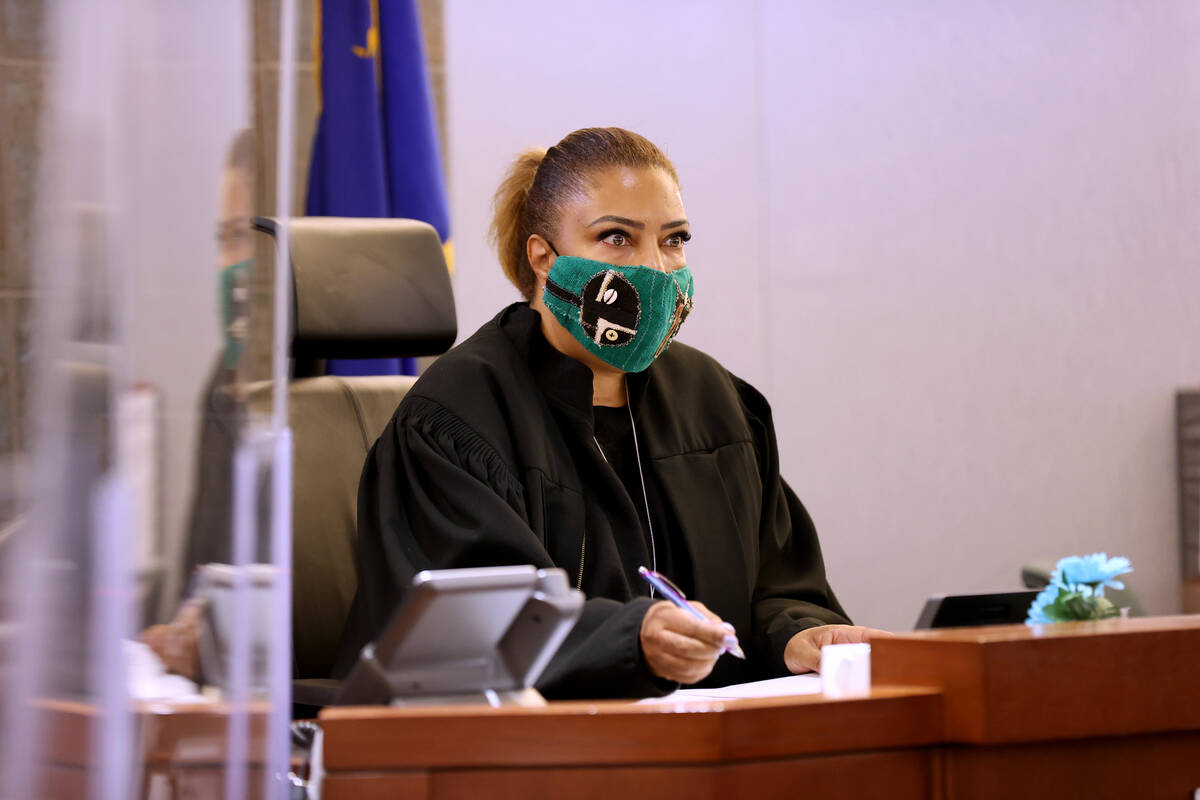 Las Vegas Justice of the Peace Karen Bennett-Haron presides in court at the Regional Justice Center in Las Vegas on Thursday, April 7, 2022. A preliminary hearing was scheduled for Brandon Toseland, who is charged in the death of his girlfriend’s 4-year-old son, but it was canceled after prosecutors indicated that Toseland would be indicted by a grand jury instead. (K.M. Cannon/Las Vegas Review-Journal) @KMCannonPhoto 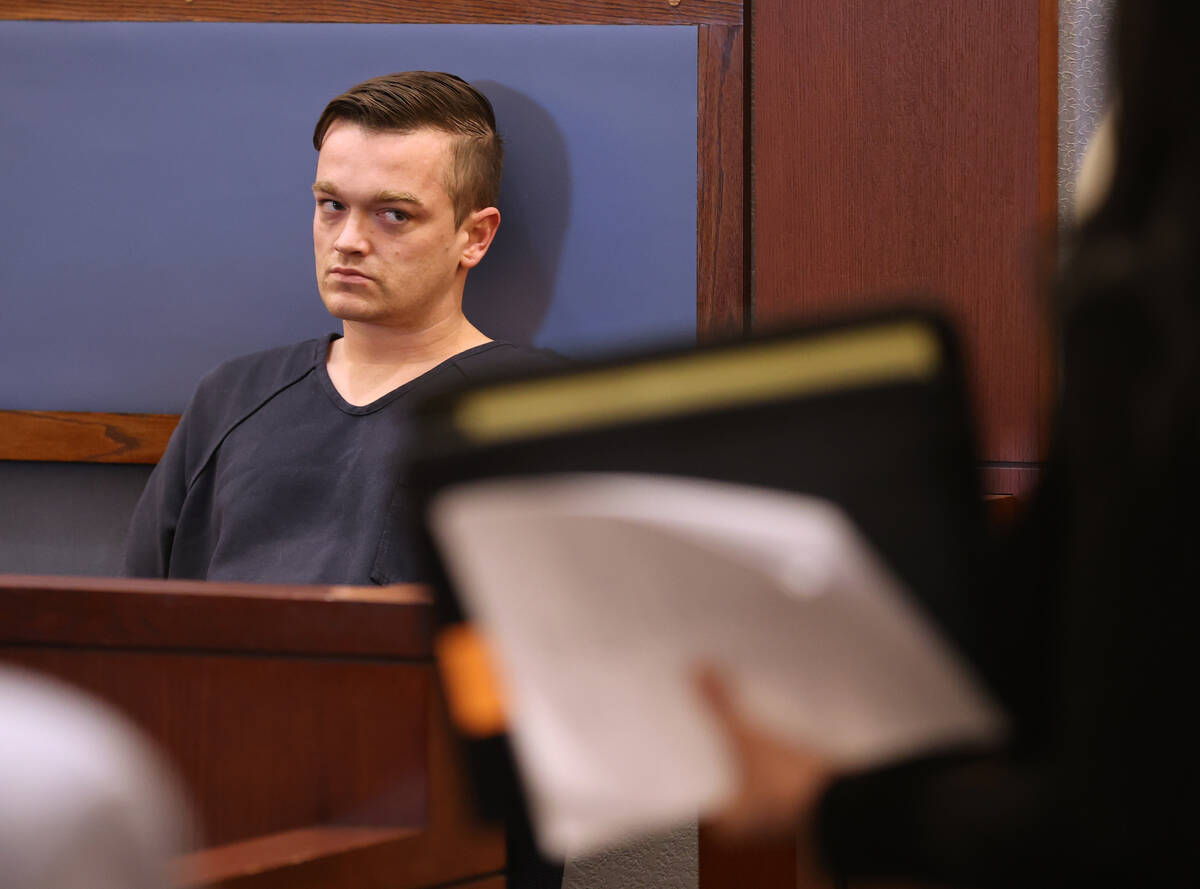 Brandon Toseland appears in court at the Regional Justice Center in Las Vegas on Thursday, April 7, 2022. Toseland is charged with murder in the death of his girlfriend’s 4-year-old son, Mason Dominguez, whose body was found in a freezer. (K.M. Cannon/Las Vegas Review-Journal) @KMCannonPhoto 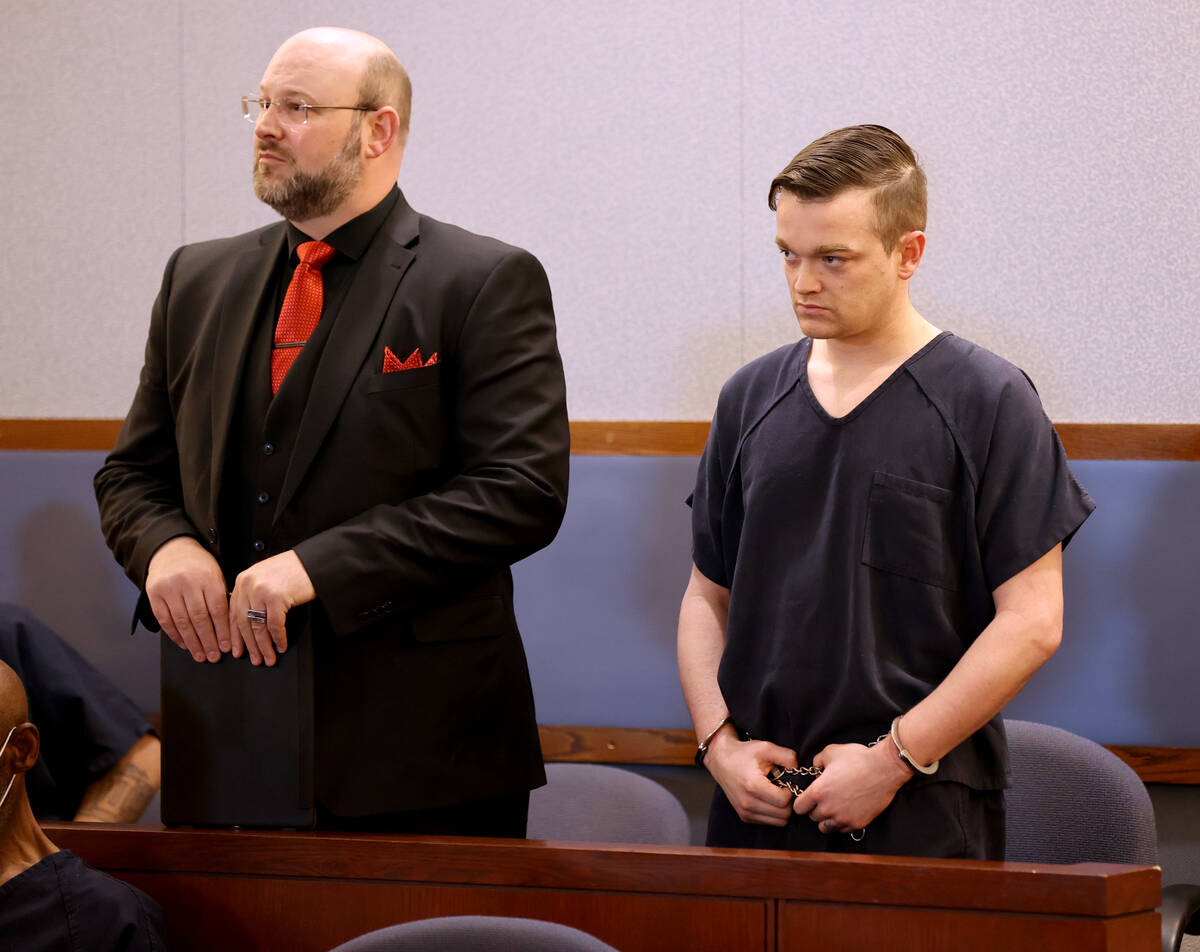 Brandon Toseland, right, appears with his attorney, Augustus Claus, in court at the Regional Justice Center in Las Vegas on Thursday, April 7, 2022. Toseland is charged with murder in the death of his girlfriend’s 4-year-old son, Mason Dominguez, whose body was found in a freezer. (K.M. Cannon/Las Vegas Review-Journal) @KMCannonPhoto 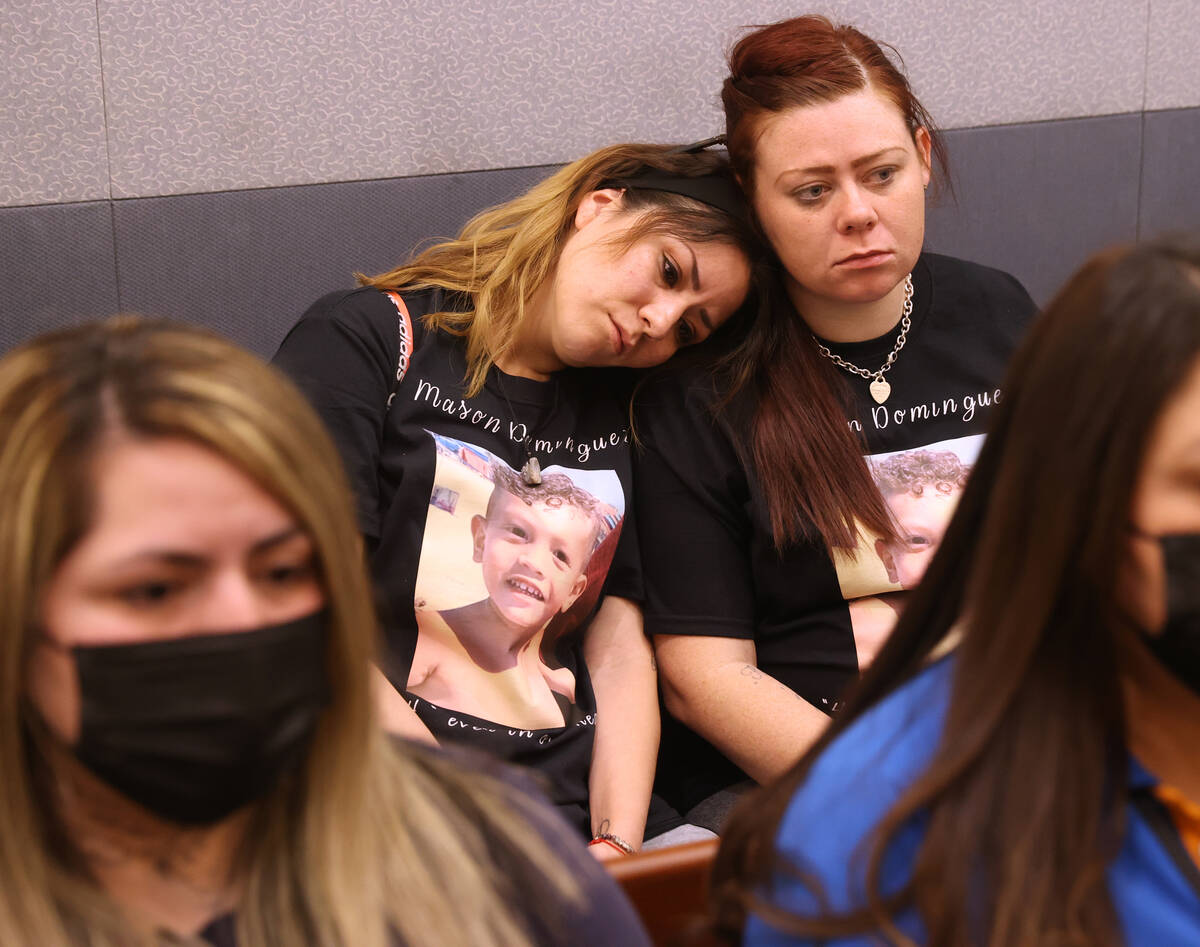 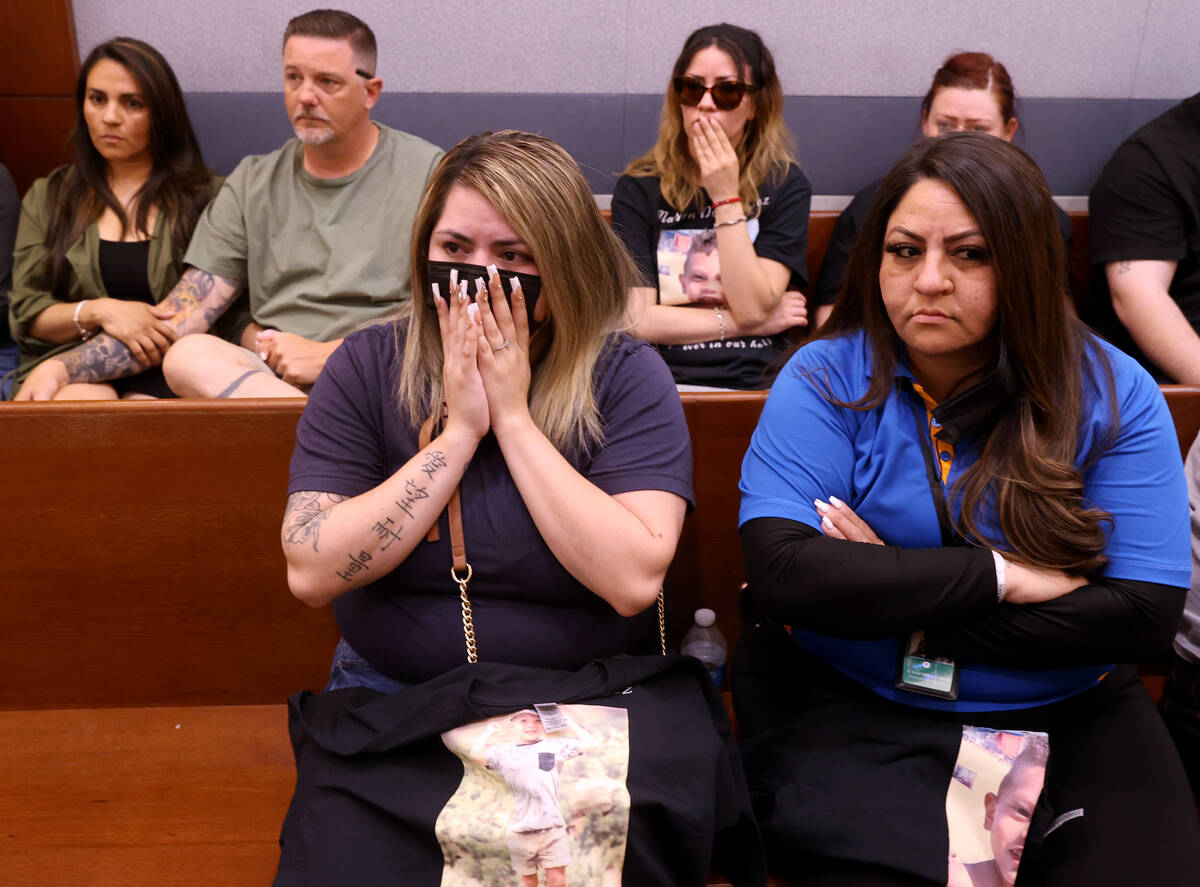 A Las Vegas man was indicted Thursday on murder and child abuse charges in the death of his girlfriend’s 4-year-old son.

Brandon Toseland, 35, is accused of killing Mason Dominguez, whose body was found Feb. 22 in the freezer of Toseland’s northeast valley home. Police were alerted to the case by Mason’s 7-year-old sister, who brought a note from her mother to school.

Toseland appeared in court Thursday morning, before the indictment was returned. During the hearing, prosecutors detailed more of the boy’s injuries.

Fleck said the boy suffered a cut to his left eye; bruising on his torso, abdomen and extremities; and abrasions “throughout his head.” He also had a bite mark on his left arm.

Toseland is accused of injuring Mason by “striking and/or kicking” the boy, or causing him to hit an “unknown object,” or by “shaking and/or squeezing” him, according to the indictment.

Prosecutors also wrote that between March 2021 and December, Toseland struck Mason with a spatula, resulting in bruising and cuts to his buttocks.

Fleck said Toseland admitted that Mason was showing “signs of trauma” but did not seek medical attention for the boy.

Toseland’s defense attorney, Augustus Claus, said Thursday that one of the statements made to police indicated that Toseland attempted to resuscitate Mason.

“This was an injury in which the child was already in distress, your honor, before the child came into the room with Mr. Toseland,” the attorney told Justice of the Peace Karen Bennett-Haron.

Mason’s cause and manner of death had not been determined by the Clark County coroner’s office as of Thursday.

Claus told the judge that he was ready to hold a preliminary hearing in the case, but Fleck said prosecutors already had presented the case to a grand jury. Grand jury hearings are not public.

Instead of holding the preliminary hearing, Bennett-Haron ordered Toseland held without bail.

Later, an indictment was returned against the defendant, charging him with 10 counts, including murder, child abuse, kidnapping and domestic battery involving strangulation.

Mason’s mother, Dahsia Maldonado, had written in the note her daughter brought to school that she had not seen Mason since Dec. 11 and suspected he was dead. The note also said Maldonado and her daughter were being held captive.

Toseland was arrested the day the girl brought the note to school. Police found a hole in the backyard, where they suspect Toseland planned to bury Mason’s body.

Maldonado told police that Mason became ill in December but that Toseland, whom Maldonado had been dating for 11 months, would not let her take the boy to a hospital.

In a wrongful death case Maldonado filed in March against Toseland, the woman said she was often handcuffed to the car when she and Toseland would leave the home, and that she was usually locked away from her daughter.

Court records show that Toseland was charged with domestic battery in 2013 and 2019, but both cases were dismissed. In the 2019 case, Toseland was required to complete community service and impulse control counseling before the case was dismissed.

Toseland had a three-year child custody battle with the mother of his two children, who are 7 and 5, according to Family Court records. The mother argued for sole legal custody of the children but said there had been no instances of domestic violence or involvement by Child Protective Services.

The court granted the parents joint custody in August. The case was reopened last month when the mother asked to change the custody agreement because, she wrote, “the other party is in jail.”

Toseland is scheduled to appear for an arraignment Friday in Clark County District Court.