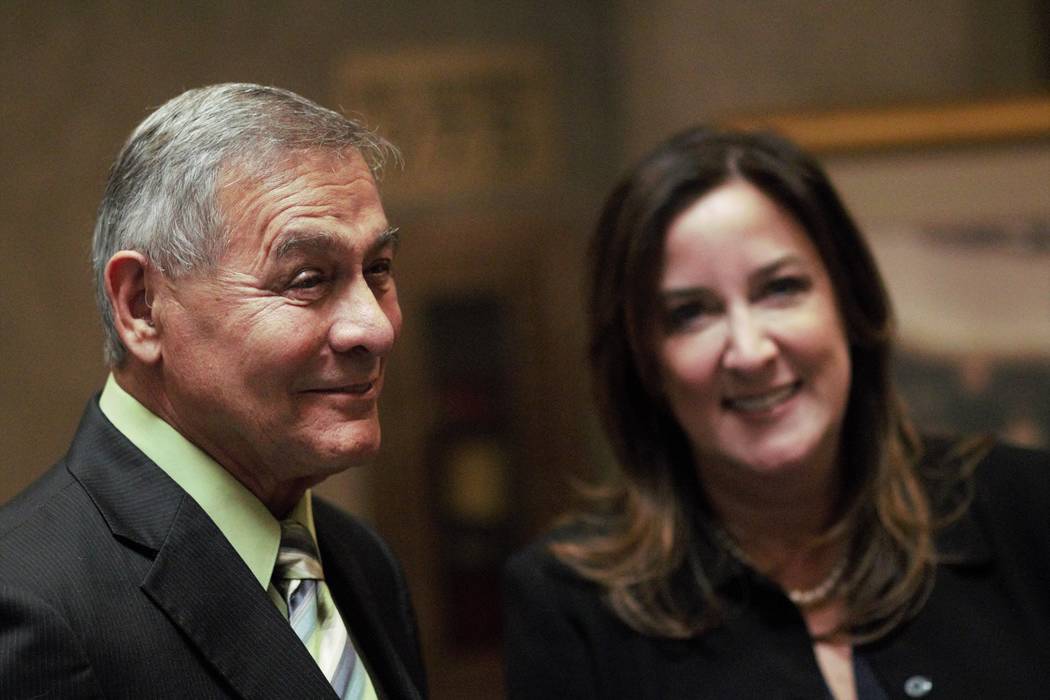 Frank LaPena, 81, the accused mastermind of a notorious contract murder, celebrates with his attorney Kristina Wildeveld, after the Nevada Parole Board voted to grant him a conditional pardon and restore his civil rights in Carson City on Nov. 6, 2019. (Colton Lochhead/Las Vegas Review-Journal) 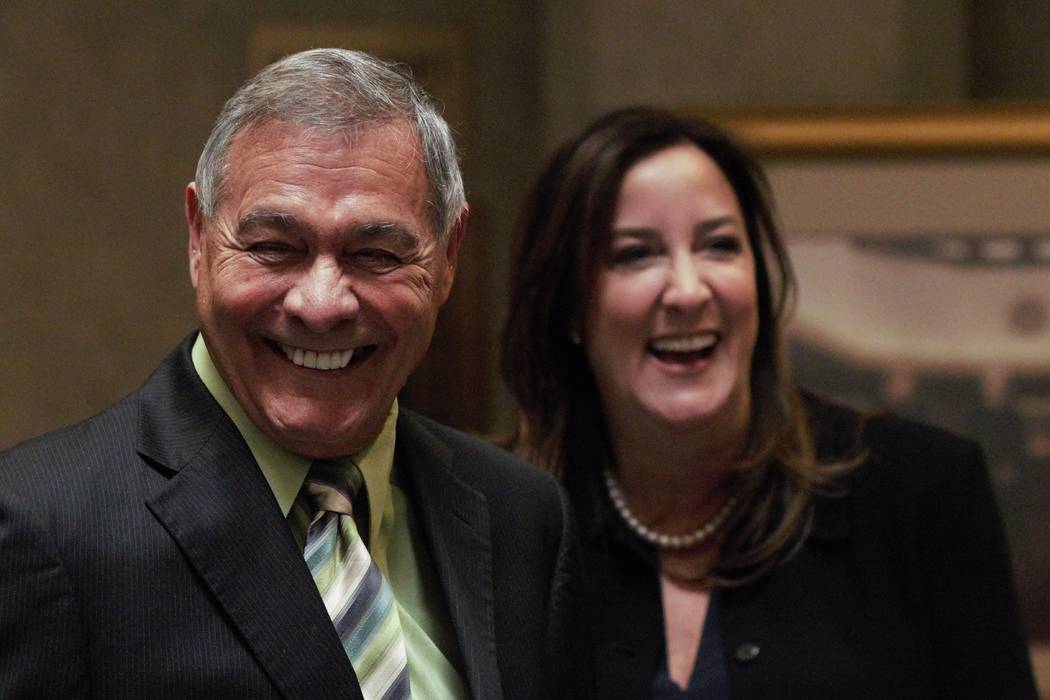 Frank LaPena, 81, the accused mastermind of a notorious contract murder, celebrates with his attorney Kristina Wildeveld, after the Nevada Pardons Board voted to grant him a conditional pardon and restore his civil rights in Carson City on Nov. 6, 2019. (Colton Lochhead/Las Vegas Review-Journal) 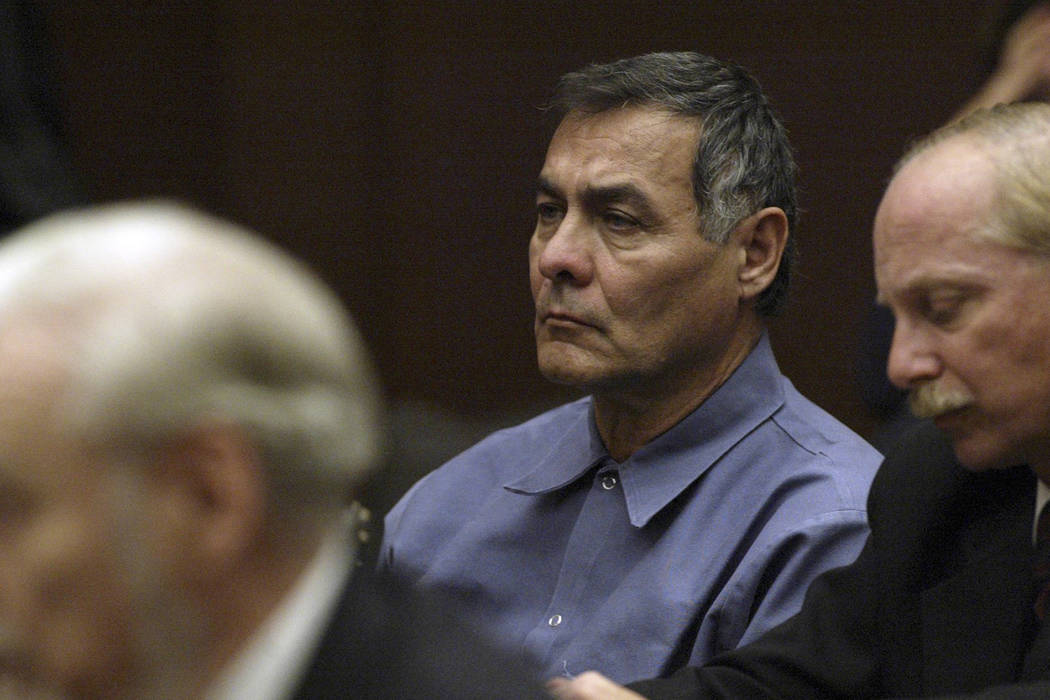 CARSON CITY — A onetime Las Vegas casino bell captain who spent 25 years in prison as the accused mastermind in a notorious 1974 contract murder won his last legal battle for freedom Wednesday when the state Pardons Board granted him a conditional pardon restoring all his civil rights.

Frank LaPena, implicated in the murder by a confessed killer seeking a plea deal, broke down as he thanked the nine-member board for hearing his application. The nine-member board, which is chaired by the governor and includes the attorney general and all the justices of the state Supreme Court, voted unanimously and with little comment to grant his petition, ending his parole for good.

“It’s a tortured history,” said Justice Abbi Silver, who brought LaPena’s petition to the board and presided in one of his many appeals. “In 30 years I’ve never seen a case like this.”

LaPena’s application sought full restoration of his civil rights except for gun ownership, which he did not seek. Kristina Wildeveld, his lawyer, said LaPena, now 81, only wanted to be able to travel freely without having to ask permission from a parole officer.

“I’m going to Disneyland,” a joking LaPena said after the board’s decision. “Without permission! I’ve got family that’s out of state. I can go see them anytime I want…. I just get in my car and I don’t have to say nothing to anybody.”

LaPena’s 45-year legal odyssey started with the 1974 murder of a Caesars Palace executive’s wife in an apparent home robbery. LaPena and his girlfriend were implicated by the confessed killer as the masterminds behind the crime. LaPena’s girlfriend was acquitted but LaPena was found guilty of first-degree murder and robbery in 1977 and sentenced to life in prison without the possibility of parole.

The confessed killer had implicated LaPena in exchange for a lenient plea deal. On that basis, LaPena’s conviction was thrown out in 1982 and a new trial ordered. LaPena was freed for seven years while the case moved through the legal system. Before that trial, prosecutors offered LaPena a deal for time served and instant release if he would plead guilty. LaPena refused and went to trial instead. He was again found guilty.

In 1997, that conviction was also vacated and another trial ordered. A year later, however, the state Supreme Court reversed that decision. LaPena, who at the time was living in Arizona, returned to Nevada and to prison.

Then, in 2003, the Pardons Board commuted his sentence, making LaPena eligible for parole. At the hearing, former chief state Supreme Court Justice E.M. “Al” Gunderson, who served three terms on the court from 1970 to 1988, spoke in LaPena’s support, telling the board that prosecutors had made a “wrong call” in charging him.

After reviewing the case, “I have become even more convinced than ever before that Frank LaPena should never have been charged,” he told the board, whose members at the time included Gov. Kenny Guinn as chairman and another future governor, Attorney General Brian Sandoval.

He was denied parole in 2004 but won his release from prison the following year. Over the decades, his lawyers included figures who would rise to political prominence in the state, such as former Sen. Harry Reid and former Las Vegas Mayor Oscar Goodman. LaPena has worked as a paralegal and has been married to a woman he met one month after his release.

No one spoke against his application before the Pardons Board Wednesday. One of two people who spoke on his behalf was James Allen, a paroled former death row inmate, told the board how LaPena, imprisoned in the early 1980s, had intervened to save his original accuser from a jailhouse stabbing by other inmates.

Asked by Gov. Steve Sisolak why he wasn’t seeking restoration of gun rights, LaPena said he hadn’t used a gun since his military service and didn’t have any need for one.

“Guns only get you in trouble,” he said.