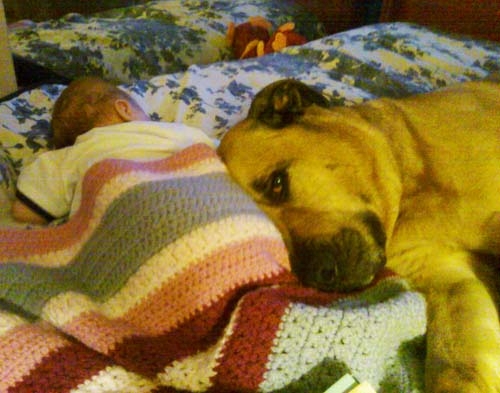 A month ago, it would have been all but unthinkable for a dog to be spared after mauling a young child to death.

That changed last month in a Pennsylvania courtroom when a husky that had killed a newborn boy was allowed to live.

Buoyed by the Pennsylvania decision, dog-loving lawyers who have successfully freed dozens of dogs from potential death sentences hoped they could do the same for Onion.

Though a Las Vegas judge thwarted their arguments Friday, the activists are not done fighting for Onion and for other dogs on death row. Their efforts are part of a burgeoning movement among animal lovers around the country who try to save canines that have been deemed dangerous or vicious.

Richard Rosenthal, who has helped more than 30 animals through his organization, The Lexus Project, said he advocates for the dogs because they often aren’t the vicious animals that officials make them out to be. Many dog bite cases happen because of something the humans did, he said.

"Should the dog die for the owner’s negligence?" the New Yorker said.

"There are a lot of animals in need out there. Why are we trying to save one that’s killed someone?" said Colleen Lynn, who founded and runs dogsbite.org, a nonprofit group that advocates for dog-bite victims.

Rosenthal’s first case involved a greyhound named Lexus in Rhode Island. He and his wife are greyhound owners and heard about the dog being condemned after it killed a small Pomeranian in a dog park in 2009.

Rosenthal said the greyhound, a hunter, probably viewed the dog as a rabbit, its traditional prey. The Pomeranian owner was to blame for allowing its little dog near the larger breeds, he said.

Rosenthal had no experience in animal law, but the lawyer challenged Lexus’ death sentence and won. The judge allowed Rosenthal and his wife to adopt Lexus and take the dog out of Rhode Island to their New York home.

Since then The Lexus Project has saved dozens of dogs, including one that killed a neighbor’s chickens. All of those cases involved dog bites or the killing of other animals. Onion was his first case involving a dead person.

His argument remains the same: The dog isn’t to blame because he was merely reacting instinctively when Jeremiah Eskew-Shahan climbed on him while he slept. The boy’s family should have been watching more closely or kept the small child away from the big dog altogether.

"If I thought that killing the dog would bring back the child, I would say, ‘Absolutely. In a second, let’s trade.’ But killing the dog only means we’ll have two deaths instead of one," Rosenthal said.

Jeremiah’s father has said he wanted the dog to die as punishment for its actions.

Rosenthal said that notion is pointless.

"A human on death row knows why he’s being killed," he said. "Dogs live in the moment. I can assure you, Onion is not pondering the effect of what he did."

Since taking on Onion’s cause a week ago, Rosenthal has received numerous calls and emails, with supporters outnumbering detractors 10-to-1 .

Onion’s advocates, led by Chicago-area dog rescuer Les Golden, hoped to spare his life and take him to a sanctuary in Colorado that specializes in caring for large, aggressive dogs.

Judges in at least 15 states have agreed to similar arrangements, including last month’s landmark case in Pennsylvania that saved Helo the husky.

The dog was set to die for the February mauling death of a newborn baby in McKeesport, Pa. The baby’s mother had left him in a baby seat on the living room floor and left the room. She heard screaming and came back to find her child bleeding on the ground and the dog nearby. The boy died soon after.

A dog behavior expert later examined the dog and determined it was not dangerous. He believed Helo, then known as Nikko, mistook the baby for a toy.

The case attracted widespread attention and sparked an online petition that got thousands of signatures from people who wanted the judge to spare Helo, according to the Pittsburgh Post-Gazette.

Allegheny County Common Pleas Judge Edward Borkowski did just that, signing off on an agreement between the district attorney’s office and the dog’s lawyers to let it live at an out-of-state sanctuary where it would have no contact with the public.

Onion’s supporters hoped to secure the same fate for him and found a dog sanctuary in Colorado that would take him in. Their hopes took a major hit when District Judge Joanna Kishner ruled The Lexus Project had no legal standing to intervene on the dog’s behalf.

Onion’s lawyers said they would appeal to the state Supreme Court.

Rosenthal had hoped to come to an agreement with Henderson officials that would free Onion and ensure he never hurt anyone again. But city officials remained steadfast.

"This dog is vicious because it attacked and killed a 1-year-old baby. We are following the law. We believe this is a public safety issue," animal control spokesman Keith Paul said.

Besides the attack on Jeremiah, Onion had been aggressive with other dogs and also growled and attacked his kennel when a veterinarian tried to examine him at the city shelter, officials said.

That kind of behavior should be expected from a dog who was ripped from his home and put in isolated captivity, Onion’s supporters say.

And aggression or behavior problems can be addressed through training, Rosenthal said.

However, Lynn, the advocate for dog-bite victims, said such training provides no guarantee against a repeat attack.

Onion’s advocates can’t guarantee that the dog would never leave the Blue Lion Rescue ranch in Colorado, she said. And once a dog leaves the state, judges and animal control officials rarely keep tabs on its whereabouts or owners, which leads to widespread movement of dangerous dogs from one state to the next, she said.

The bottom line is a child is dead, a fact that the dog activists tend to minimize, Lynn said. "You’re not dealing with people who are level-headed at all. They are way across the line."

Dogs deserve some rights, but they’re still not human beings and shouldn’t be treated as such, she said.

But that line has blurred as many dog owners treat the family pets more like children and cherished family members than ever before, she said.

"We’re losing our ability to sort of differentiate where the animals are positioned in our lives," she said.

That’s what’s happening in Onion’s case, she said, where activists are intent on saving one dog’s life while dozens will die for no reason other than not having a home.

In Henderson, for example, 67 dogs were euthanized last month alone.

"If they really love these animals, there are lots of them out there who didn’t maul and didn’t kill," Lynn said.