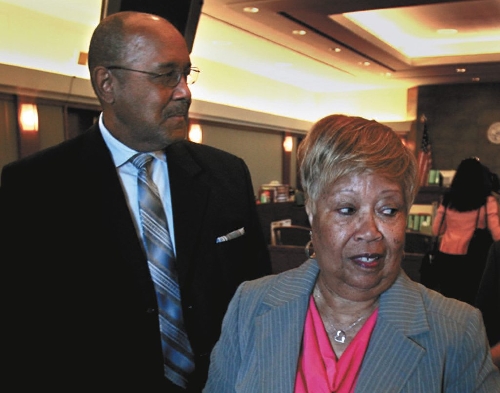 For the second time in three days, a Las Vegas jury on Wednesday levied a multimillion-dollar verdict against the drug companies that made and sold the sedative linked to Southern Nevada’s hepatitis C outbreak.

The jury ordered Teva Parenteral Medicines Inc. and Baxter Healthcare Corp. to pay $90 million in punitive damages to Michael Washington and his wife, Josephine, who sued the companies on product liability claims.

Jurors "followed the facts, and they sent a strong message to the drug companies," Josephine Washington said. "Profit isn’t everything."

Michael Washington, 71, has one of seven hepatitis C infections genetically linked to the Endoscopy Center of Southern Nevada.

After the four-week trial, the jury Monday awarded the Washingtons $14 million in compensatory damages, which can include lost income, pain and suffering, and medical bills.

That verdict came within minutes of a $162.5 million punitive damage award in another outbreak-related case.

Lawyers for infected patients have hoped to win enough verdicts against the drug companies to force a settlement and end the wave of litigation moving toward trial.

"We’re not sure how much more we’ll have to go through," said Patti Wise, the Washingtons’ lawyer.

Another case against the drug companies started trial Monday, and more trials are scheduled for December, January and through next year.

Meanwhile, the first case that went to trial and ended with a $500 million punitive damage award remained under appeal at the Nevada Supreme Court. No plaintiffs will see any money until their cases get through appeals.

Like the other patients who won their lawsuits, the Washingtons sued under product liability law, arguing that the drug companies should have known that the 50-milliliter vials of propofol they made would be misused in endoscopy clinics, where typical procedures require less than 20 milliliters of the popular anesthetic.

The companies have argued that reckless behavior by doctors and nurses who misused the propofol were to blame for the infections.

Health officials said the hepatitis outbreak was caused by nurse anesthetists who reused propofol vials among patients after they had become contaminated by syringes reused on patients infected with hepatitis C.

Authorities have charged Dr. Dipak Desai and two nurse anesthetists with multiple felonies stemming from the outbreak. Desai has surrendered his license to practice medicine in Nevada.

Michael Washington said he was glad his case was over, but he will live with the liver disease for the rest of his life.

"I’m trying to get my life back to normal," he said.