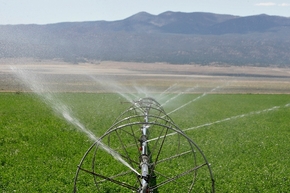 Alfalfa is watered in White Pine County's Spring Valley, where the Southern Nevada Water Authority plans to one day pump groundwater for use in Las Vegas. A federal court hearing in Las Vegas Monday could impact the authority's plans. Las Vegas Review-Journal file 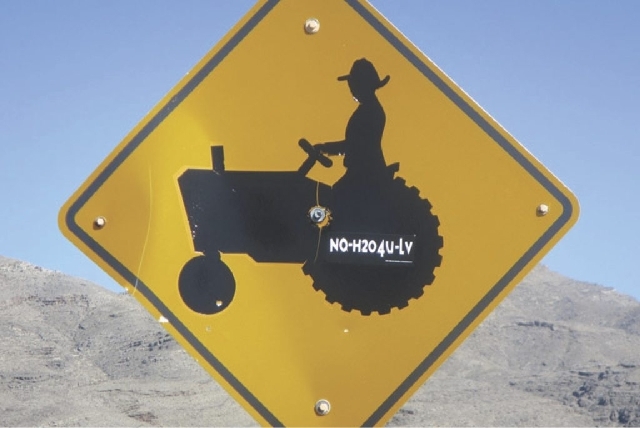 A bumper sticker stuck to a road sign near the Lincoln County town of Hiko captures the mood of some rural residents when it comes to the Southern Nevada Water Authority's plans to siphon water from rural eastern Nevada. Henry Brean Las Vegas Review-Journal 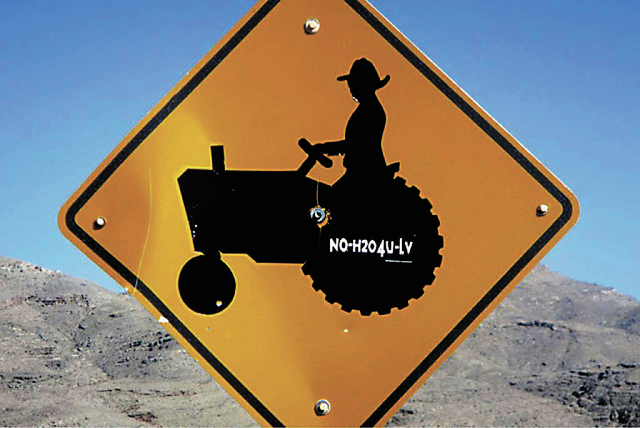 Three years and two dozen motions later, a federal court in Las Vegas will hear a lawsuit Monday that seeks to block the Southern Nevada Water Authority from siphoning groundwater from a 300-mile swath of eastern Nevada.

A coalition of local governments, tribes and environmental groups in Nevada and Utah sued the U.S. Bureau of Land Management and the Department of the Interior in February 2014 for granting a right of way to the massive network of pumps and pipes the water authority wants to build to deliver more water to Las Vegas.

The authority one day hopes to pump up to 84,000 acre-feet of water a year — enough to supply roughly 170,000 average Las Vegas homes — from Cave, Dry Lake and Delamar valleys in Lincoln County and Spring Valley in White Pine County.

There is no specific timeline for when the multibillion-dollar project might be built or when the water might be needed.

Plaintiffs in the case accuse federal regulators of ignoring environmental laws and tribal trust obligations when they granted the authority permission to build more than 250 miles of water pipelines across public land.

The lawsuit specifically cites threats to rare species of fish, snails, frogs and toads — some of them already under federal protection — that could be wiped out by large-scale groundwater pumping by the authority. The plaintiffs argue that the project also threatens to damage or fragment prime habitat for the greater sage grouse, the chickenlike bird once under consideration for endangered species status.

“At the heart of the lawsuit is the protection and defense of America’s public land from the ruthless exploitation by the Southern Nevada Water Authority,” said Rob Mrowka, a senior scientist for the Tucson, Arizona-based Center for Biological Diversity, a plaintiff in the lawsuit. “The water authority’s plan to drain ancient aquifers would cause catastrophic changes to public lands across eastern Nevada.”

But officials for the water authority, which joined the government’s side of the case in April 2014, say they have no intention of draining aquifers or wiping out wildlife, neither of which is permitted under state and federal law anyway.

In a written statement Thursday, the authority noted that its 2004 application for a federal right of way underwent a thorough environmental review lasting more than eight years and involving 16 federal, state and local agencies, nine public meetings in Nevada and Utah, five meetings with tribes in the two states and public comment periods totaling about four months.

The Las Vegas Valley gets 90 percent of its water supply from the Colorado River by way of Lake Mead.

The authority has been working on developing a new water source within the state since the late 1980s, when Las Vegas water officials filed a stack of applications with the state for unappropriated groundwater in valleys as far north as Great Basin National Park.

According to the agency’s current 50-year water resource plan, groundwater from the rural valleys north of Las Vegas won’t be needed until 2035 at the earliest.

By the authority’s own estimates, the pipeline project could take 10 to 15 years to build and cost more than $15 billion, including financing costs.

The lawsuit set to be heard Monday began as two separate suits, one brought by the Center for Biological Diversity and the other by White Pine County, several American Indian tribes and a variety of conservation advocacy groups in Nevada and Utah.