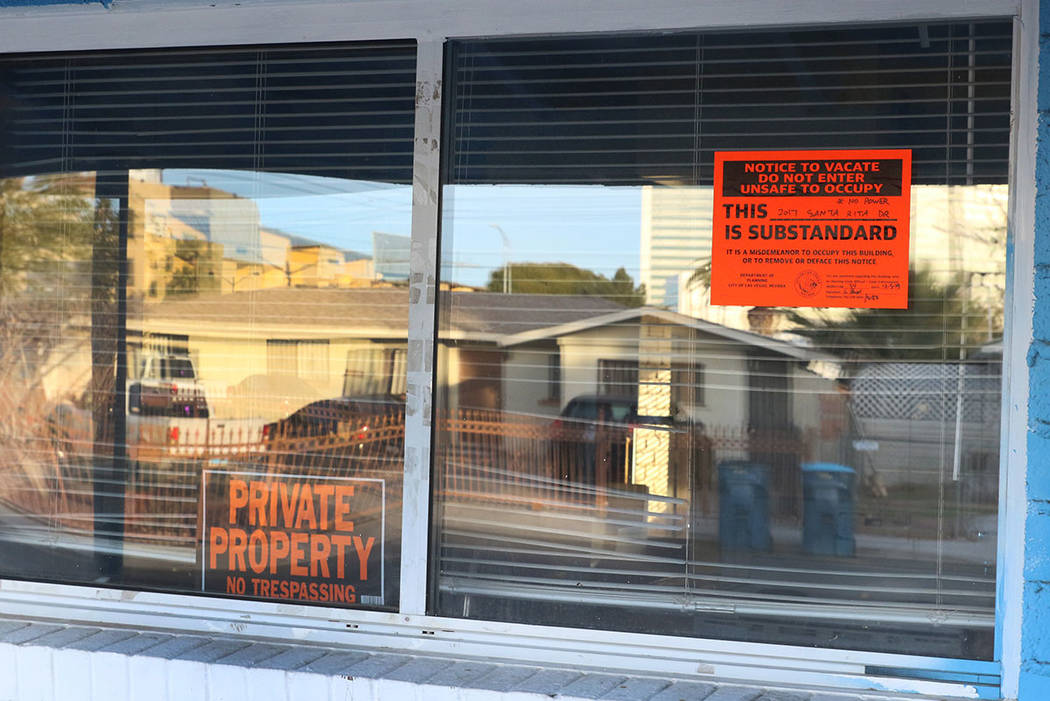 "Private Property" and "Unsafe to Occupy" signs are posted on the window of a house at 2017 S. Santa Rita Drive in Las Vegas in December. (Bizuayehu Tesfaye/Las Vegas Review-Journal) @bizutesfaye

The number of summary eviction cases filed in Las Vegas Justice Court in 2019 decreased for the first time in a decade, following reforms to Nevada’s eviction laws last year.

Some 30,300 cases were filed last year, about a 7 percent drop from 2018. It was the lowest number of filings since 2016. While the statistics do not encompass all eviction cases, summary cases are the most common type of eviction proceeding in Nevada.

Court officials previously projected summary eviction cases would increase in 2019, but filings fell sharply in July 2019 and remained relatively low for most of the year. July’s drop in filings — down 30 percent compared with the previous year — coincided with the advent of a new law, Senate Bill 151, that extended the time a tenant has to pay overdue rent to avoid eviction from five to seven business days.

One major supporter of SB 151 said the drop in eviction filings shows the new law is working.

“People, when given more time (to pay overdue rent), are alleviating the problem,” said Bailey Bortolin, policy director with the Nevada Coalition of Legal Service Providers. “It’s leading to less strain on our courts and allowing people to stay in their homes.”

Last year, the Review-Journal investigated the role of evictions in Nevada’s affordable housing crisis. The newspaper found that even after recent reforms, Nevada still has one of the nation’s fastest eviction processes. In the single-family rental market, corporate landlords evicted tenants at rates above average.

Justice courts in Henderson and North Las Vegas also report that their numbers of filings were down in 2019.

However, more cases were filed last December than in December 2018.

Kaila Leavitt, president of the Las Vegas-based Leavitt Evictions company, said the rebound shows that rental companies are learning how to better navigate the new law. She believed the dip in filings was due to a new provision requiring eviction notices to be delivered by a licensed process server or law enforcement officer.

“It’s going to rise drastically,” she said. “The rent here in Vegas is exponentially rising everywhere … so it makes it hard to find tenants who will pay the prices you’re asking for.”

The passage of SB 151 has also garnered pushback from players in the housing and rental industries. Once the law took effect, some rental companies shortened how much time tenants had to pay rent before it was considered overdue.

Nevada Realtors president Chris Bishop said the new law has spurred his association to play a more active role in the 2020 election and 2021 Legislature, including finding real estate agents to run for office.

Bishop said it’s too early to name specific priorities, but he said the efforts will focus on protecting private property rights. Some provisions of SB 151, like capping fees for late rent, have hurt the rental market, he said.

“It could cause tenants to decide to pay late because there’s not that big of a risk,” he said. “Some of these guidelines have made some people think maybe I don’t want to rent my house out at all, and then we’re reducing rentals.”

State Sen. Yvanna Cancela, who pushed for the late-fee cap, said she welcomed Nevada Realtors and all parties to continue collaborating to address the state’s affordable housing crisis. Overall, she said, SB 151 appears to be working well so far.

“Certainly we can’t predict all reactions to a piece of legislation, but the data shows more people are staying in their homes,” she said. “I hope that’s what we see continues to happen.”