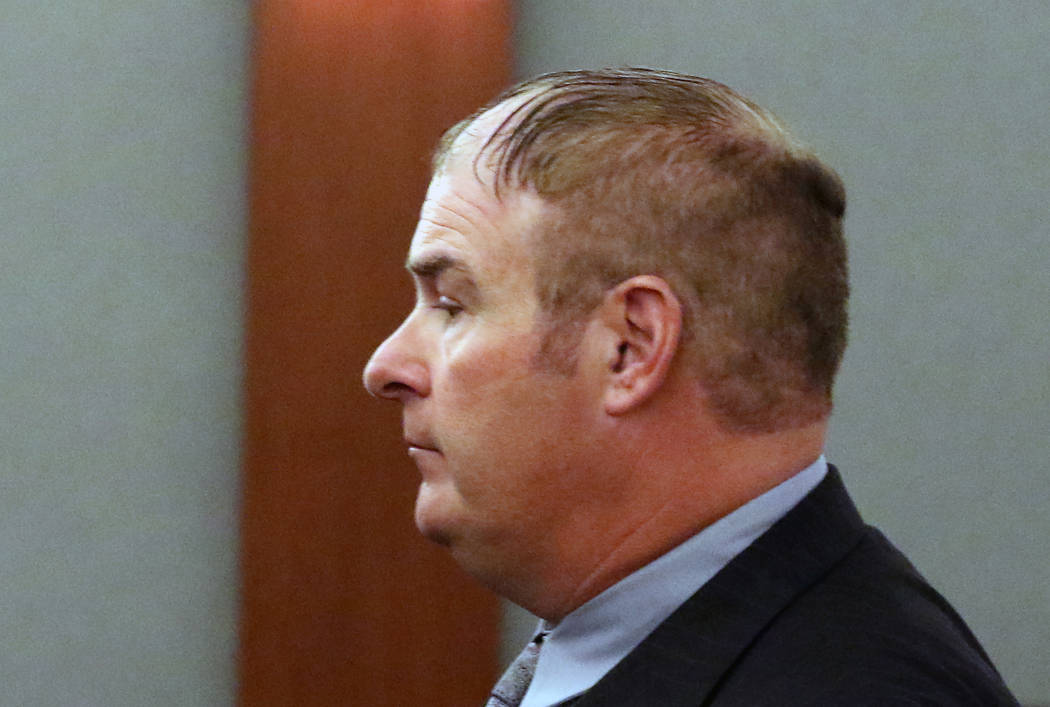 A former Las Vegas Fire Capt. Richard Loughry leaves the courtroom at the Regional Justice Center on March 4, 2019. On Monday, June 24, Loughry was ordered to serve probation and register as a sex offender for paying a teenage girl to have sex with him at a fire station. (Bizuayehu Tesfaye/Las Vegas Review-Journal) @bizutesfaye

A former Las Vegas fire captain was ordered to serve probation and register as a sex offender Monday for paying a teenage girl $300 to have sex with him at a fire station.

With about a dozen family members and firefighters seated behind him, a tearful Richard Loughry called his crime “the most stupid devastating decision I’ve ever made in my entire life.”

He told Senior District Judge James Bixler that he had up until then lived up to a “code” of “dignity” as a firefighter.

“Now there is no solace and honor and no encouragement in my accomplishments,” Loughry said. “I live in a state of regret and remorse every single day.

Bixler decided that Loughry, 48, should serve up to five years’ probation and register as a sex offender.

“I feel so sorry for you,” the judge told Loughry. “You had done nothing but serve our community for your entire career. And to have this happen to you is really and truly a tragedy.”

“We are extremely grateful to judge Bixler for allowing him the opportunity of completing probation,” defense attorney Craig Hendricks said after the sentencing. “It’s obvious the court took into consideration (Loughry’s) perfect record and contribution to the community prior to this incident.”

In February 2017, Loughry contacted a girl through an advertisement on craigslist.org and twice asked her whether she was comfortable going to his fire station, according to authorities. The advertisement described the girl as 22, though she was 15 at the time, prosecutors said.

According to court briefs, Loughry told the girl to stay quiet as he led her to the captain’s dorm at Station 47, where they had sex. She told police she spent about 45 minutes at the fire station. She said she heard voices coming from another room but could not tell if they were people in the station talking or from a television. The report does not indicate that other firefighters were aware of her presence.

Loughry, who resigned from the Fire Department shortly after his arrest, initially faced three counts of lewdness with a child under 16; two counts of child abuse, neglect or endangerment; and one count of soliciting prostitution of a minor.

In March, he pleaded guilty to attempted statutory sexual seduction and soliciting prostitution. He entered a type of guilty plea that required him to admit only that prosecutors had enough evidence to prove the case to a jury.

Since leaving the department, Loughry has obtained a commercial driver’s license and worked in the trucking industry, according to his lawyer. Loughry also told the judge that he has attended counseling since his arrest.

Bixler said he had received about 90 letters in support of Loughry.

The judge pointed to Loughry’s “spotless record” before “he certainly stepped in a big hole here.”

Before Loughry left the courtroom, Bixler told him: “I wish you the very best.”