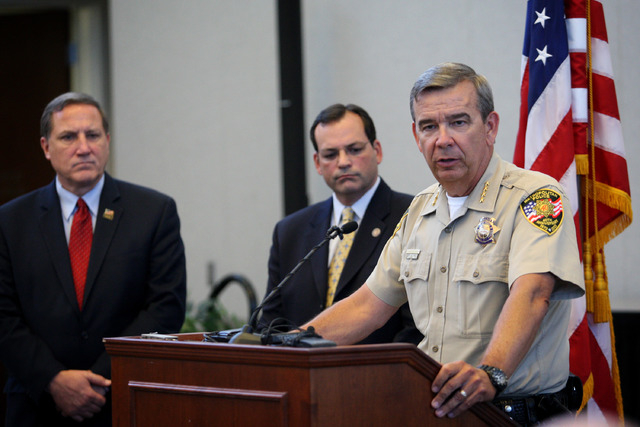 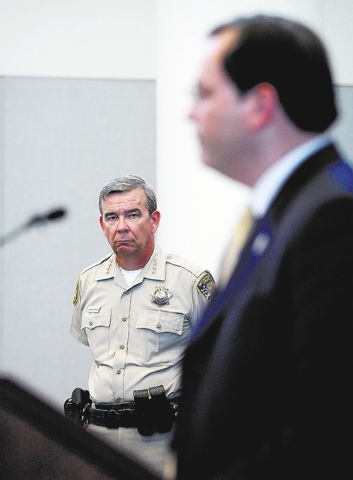 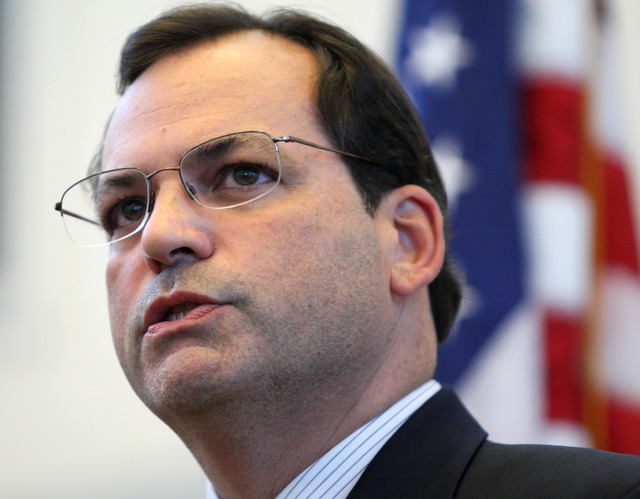 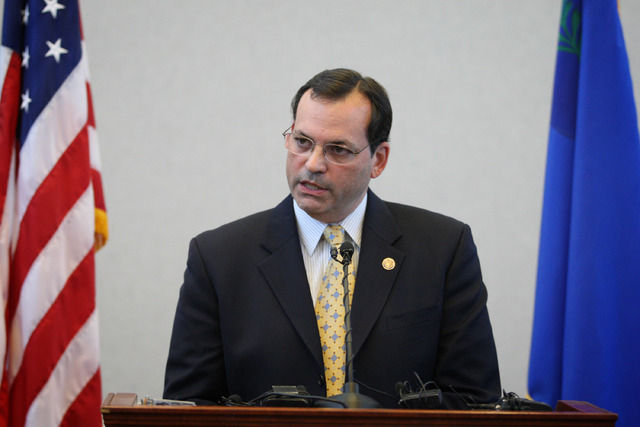 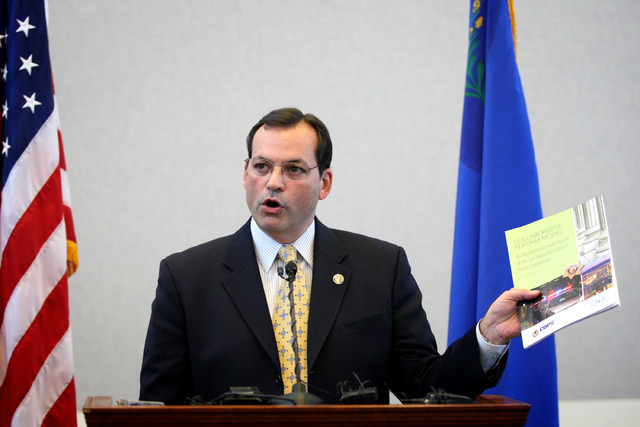 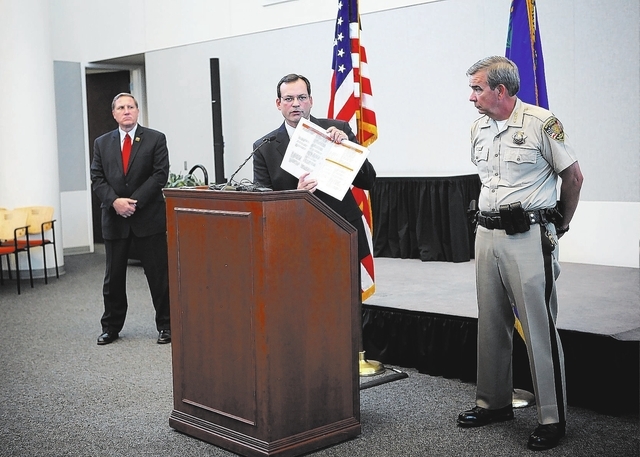 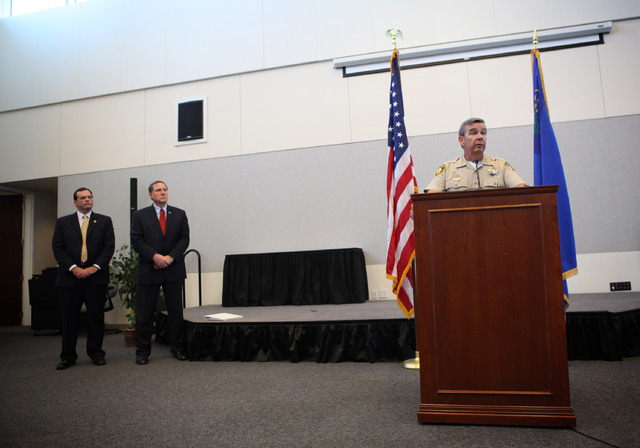 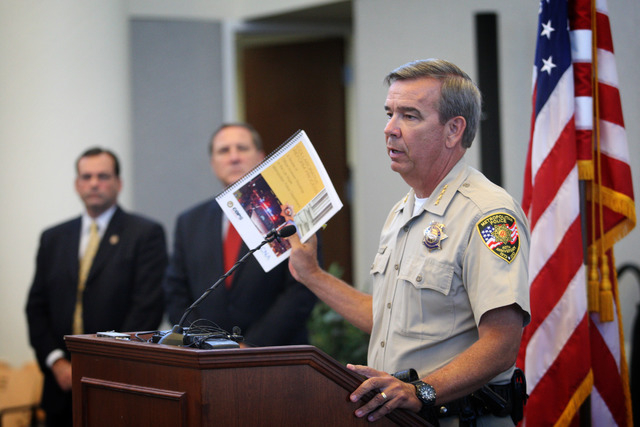 Clark County Sheriff Doug Gillespie, right, holds up a copy of a Department of Justice review of the Las Vegas Metropolitan Police Department's use of force policies and practices at a press conference at the Lloyd D. George Federal Courthouse in Las Vegas Wed., Sep. 25, 2013. (Jessica Ebelhar/Las Vegas Review-Journal) 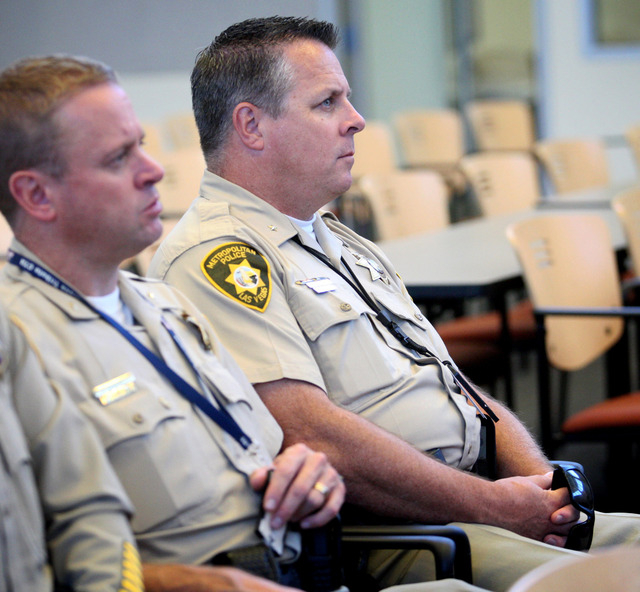 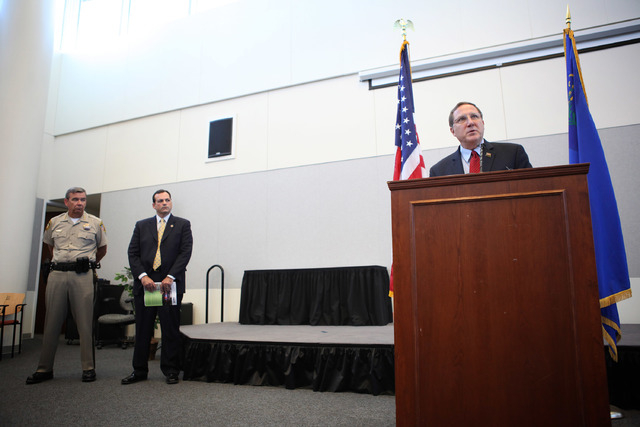 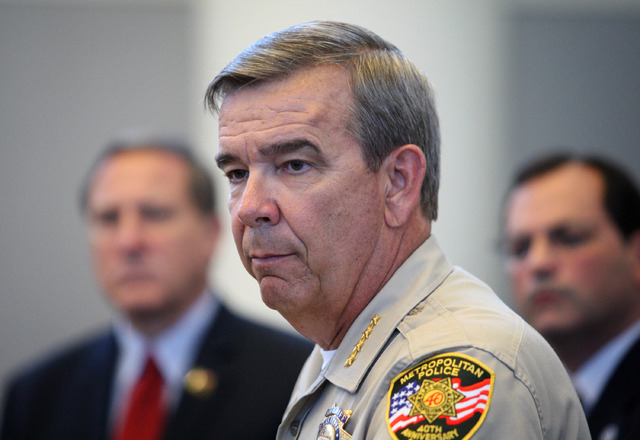 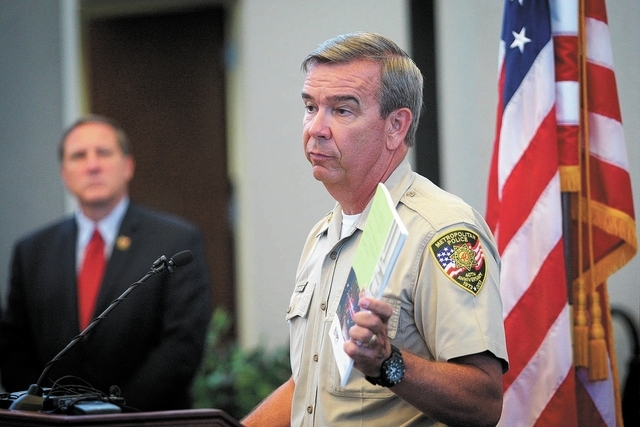 Clark County Sheriff Doug Gillespie, right, holds up a copy of a Department of Justice review of the Las Vegas Metropolitan Police Department's use of force policies and practices at a press conference at the Lloyd D. George Federal Courthouse in Las Vegas Wed., Sep. 25, 2013. (Jessica Ebelhar/Las Vegas Review-Journal)

Progress has been made, but there’s still work to do in reforming and maintaining the Metropolitan Police Department’s use-of-force policies, according to a six-month progress report released Wednesday by the U.S. Department of Justice.

Of the 80 recommendations handed down in November after a wide-ranging, yearlong study of the police department, 56 had been fully implemented, said the federal Office of Community Oriented Policing, or COPS.

Many of the department’s reforms involved key structural issues in how officer-involved shootings were reviewed. The creation of the Critical Incident Review Team in 2010; implementation of reality-based training in 2011; and changes to the Use of Force Review Board last year were “milestones” for the department, the report said.

And the creation of the Office of Internal Oversight, which analyzes department policies, training methods and shooting statistics was another key step toward transparency, the report said.

The changes were significant for an agency that for years lacked basic measures of accountability for officers’ actions in a shooting, the report said. But even with the revisions, it’s the department’s responsibility to ensure policies meet national standards for best-practices.

Joshua Ederheimer, acting director of COPS, said the department’s progress was “very good,” with almost 90 percent of the reforms either complete or in progress.

“I think it’s important to note what’s been done and put everything in context,” he said. “We’re talking major significant progress in just months. When you look at other jurisdictions engaging in some kind of reform. … we’re talking years, sometimes decades.”

Clark County Sheriff Doug Gillespie said he received the report Monday, which he called “very favorable.” He thought the report backed up his promise that the department would take all suggestions from the Justice Department.

“Actions speak louder than words,” Gillespie said. “Based on the analysis done in this report, it shows we were and are and will continue to be committed to these reforms.”

In addition to the 56 completed reforms, 15 other recommendations are in various stages of implementation. Las Vegas police had not yet addressed nine recommendations as of June, the most recent update by CNA, a Virginia nonprofit hired by the Justice Department to conduct the study.

Some of the suggested reforms yet to be addressed:

■ The police department has yet to formalize its plan for training officers in de-escalation techniques, which the authors of the study said should make up at least 25 percent of an officer’s defensive tactics training.

De-escalation has been emphasized in revision of the department’s use-of-force policies, a reaction to determination that an officer’s unnecessary escalation of a situation is often a precursor to a police shooting.

■ The department recently scrapped its relatively new Force Investigation Team, or FIT, a specialized group of detectives responsible for investigating police shootings. Police officials cited lack of manpower and resources in their decision to revert to the old method, in which a rotating group of homicide detectives investigate officer-involved shootings.

The new team didn’t meet the Justice Department’s standard, anyway, as some of the FIT detectives received no specialized training for investigating police shootings.

■ Post-shooting interviews with officers are not recorded on video. Some police officials expressed concern that failing to tape an officer’s statement would appear biased, as interviews with suspects in many criminal cases are recorded to video, the report said.

But other officials worried the policy would discourage officers from cooperating with detectives. As the study noted, local police unions have recommended officers not speak with their department’s criminal detectives, although all officers are required to give statements to internal investigators.

But the agency made substantial progress in other key areas, the study noted, including its reality-based training program, which focuses on officers’ decisions in real-life scenarios.

As of June, 68 percent of officers and sergeants had completed required reality-based training. The study said that scheduling conflicts and manpower issues have slowed the program, which was designed with the intent of training officers twice a year.

The report recommends the department conduct a manpower study to ensure it can handle the new training responsibilities. One of the recommendations to the Clark County District Attorney’s office was listed as “complete,” but with a caveat.

The report authors said they were pleased that prosecutors now respond to scenes of fatal police shootings, but urged them to respond to all shootings.

“The assessors urge the DA’s Office to respond to all instances in which an officer makes the decision to use deadly force, regardless of the outcome (death or injury of someone or a missed shot),” the report said. “The intent of any officer firing their weapon is to hit their target. Therefore, it is only a matter of chance that the subject was not struck when the officer fired.”

The 65-page progress report was released 10 months after the initial report from CNA, which was an extensive, critical look at a department that faced increased scrutiny in the wake of controversial incidents and a yearlong investigation of officer-involved shootings by the Las Vegas Review-Journal.

But the department has seen a gradual yet sustained decline in its police shootings since the peak years in 2010, the study said.

“Subsequent milestones may have sustained or accelerated the decline of OIS incidents that began in 2010,” the report said.

At least one of the changes lauded by the Justice Department has faced extreme scrutiny in recent months, however.

The Use of Force Review Board, a seven-member panel of four officers and three civilians that reviews police shootings, was once considered a rubber-stamp process that “justified” 99 percent of police shootings.

But in the nine shootings reviewed since the changes, the board has ruled against an officer in some fashion one- third of the time, the study found.

The changes were aimed at examining the totality of the officer’s actions rather than simply issuing a blanket approval or rare disapproval. Before the board changes, no officer in an on-duty shooting was ever recommended for firing.

Since the changes, there have been two: Jacquar Roston, who shot and wounded an unarmed man after mistaking a label on his hat for a gun, and Jesus Arevalo, who shot and killed mentally ill Gulf War veteran Stanley Gibson in December 2011.

In addition to Roston and Arevalo, four other officers in shootings were assigned remedial training. The supervisors on scene for the Gibson shooting, Sgt. Michael Hnatuick and Lt. David Dockendorf, were also disciplined. Hnatuick was recommended for suspension and Dockendorf was to be demoted two ranks to officer, although their punishment can be appealed in arbitration.

But Assistant Sheriff Ted Moody, who oversaw the changes to the review process, abruptly retired in July after Gillespie saved Roston’s job. Six civilian members of the Use of Force Review Board, which has more than 20 rotating members, also quit after Moody’s retirement. The CNA report was delayed at least a month because of Moody’s retirement.

The report authors noted that changes to Use of Force Review Board was good policy, but final decisions in officer discipline remain with the sheriff.

The resignations were “undoubtedly a setback,” the report said. “However, it is important to note here that the process unfolded according to LVMPD policy and procedures.”

“At the present time, we consider LVMPD’s internal review process to be among the most progressive and transparent in the nation. The fact that the most recent board outcome was transparent as well as the subject of public debate, is an improvement over past practices.

“However, it is clear that more work needs to be done to restore trust between the community and the department. We will continue to work with LVMPD on their review process, the involvement of civilian members, and the adjudication process.”

Moody later announced he will run for the soon-to-be vacant sheriff’s office. Gillespie has said he will not seek a third term.

Steven Carter, one of the authors of the report, said the controversy surrounding Use of Force Review Board will be addressed in more detail in second progress report.

But it’s not the job of the assessors to review Gillespie’s decisions, he said.

“Like a CEO of any big company, they have the final say,” Carter said.

Although the new policies are sound, the authors noted the difficulty in changing department culture. Some training instructors were observed not supporting the revised policies, the report said.

“Through direct observation, it was learned that LVMPD instructors did not consistently express support for portions of the newly revised Use of Force Policy. It is important that all LVMPD instructors be ambassadors of the policies, procedures, and tactics they are teaching.”

The report authors will continue to monitor the department until the end of the year. Their final report is slated to be released in February.