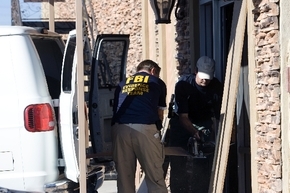 FBI agents board up a glass door that was broken when agents served a search warrant at Leon Benzer’s offices in September 2008. Benzer is among nearly 40 conspirators charged in a scheme to take over Las Vegas Valley homeowners associations.

But more than four years after the investigation became public, they still haven’t revealed the full extent of the massive scheme.

New details likely will surface as prosecutors prepare for the next phase of the long-running investigation: the trial of Leon Benzer, accused of being the “architect” of the corruption scheme, and 10 other defendants indicted with him in January.

Prosecutors are pushing for an October trial, but defense lawyers want a date in March 2014 to give them more time to review the huge amount of evidence the government collected.

Several million pages of documents, with a number of undercover audiotapes, are being provided to the defense in what is thought to be the largest public corruption case federal authorities have brought in Southern Nevada.

The case, dubbed Operation GrandMaster, is being prosecuted by the Justice Department’s Fraud Section in Washington.

“It’s very difficult to fathom this many people being involved,” said Lynn Williams, president of the Vistana homeowners association, one of the 11 associations victimized in the scheme. “They were very sophisticated.”

Williams, a retired federal investigator, said authorities have done an “outstanding job” of bringing so many defendants to justice.

Williams said he understands people are frustrated with the slow progress of the investigation.

“When you have such a massive group of people involved in a conspiracy, it just takes a really long time to get it right,” he said.

Williams said he hopes the courts don’t forget about the homeowners when it comes time to order restitution.

Justice Department lawyers plan to seek nearly $25 million in restitution for homeowners, their associations and the other victims of the scheme: the banks.

Jonathan Friedrich, a homeowners advocate battling association abuses for years, said the high-profile investigation has opened eyes across the valley.

“I have seen some hairline cracks in the fortress wall,” he said. “I think people are looking over their shoulders now and saying, ‘We can’t get away with breaking the law.’u2009”

Friedrich said homeowners associations were “ripe for the picking” before authorities launched the investigation.

“There were some very dishonest, greedy people who took advantage of the situation,” he said. “It was like having a combination to a bank vault.”

What has been revealed in federal court documents, so far, is a vast conspiracy to swindle the 11 homeowners associations out of millions of dollars.

Prosecutors have alleged that Benzer, who once ran Silver Lining Construction Co., and the late construction defects lawyer Nancy Quon pulled the strings in the scheme, which took place between 2003 and 2009.

Benzer, 46, and Quon, 51, funneled more than $8 million through secret bank accounts to help them land lucrative legal and construction contracts from the homeowners associations, prosecutors have alleged.

Getting straw buyers elected to the association boards was the key to the scheme, because Benzer and Quon needed votes to steer construction defect business their way, according to prosecutors.

Lawyers, community management company employees, private investigators and former cops were among those enlisted to stack association boards that later would reward Benzer and Quon with millions of dollars in contracts.

Benzer is accused of not providing the quality repair work he promised.

The takeovers were accomplished through dirty tricks, election rigging and bribery, the court documents allege.

Benzer even had his own personal campaign consultant, longtime Republican strategist Steve Wark, on his payroll. Wark pleaded guilty and is cooperating with prosecutors.

Paul Terry, vice president of the Nevada chapter of the Community Associations Institute, which serves as a voice for homeowners associations, said he was surprised at the HOA scheme’s level of sophistication.

“You had a well thought out, well organized criminal enterprise that included the formation of management companies for the specific purpose of defrauding homeowners and their associations.”

But as far-reaching as the scheme was, Terry added, it only involved a small number of homeowners associations.

“It is clear that it is not something that is pervasive in the industry,” Terry said. “And there’s a danger that although criminal activity took place, there’s a perception developing that this is going on every day in every homeowners association, and the evidence is clear that’s not the case.”

Terry said there are 2,500 homeowners associations in Clark County registered with the state. His organization represents about 300.

Earlier this month, former Benzer confidante Ralph Priola became the latest of 29 defendants to plead guilty in the federal investigation.

Most of the defendants have entered guilty pleas to a single felony count of conspiracy to commit mail and wire fraud.

Priola, 46, acknowledged playing a central role in the takeover scheme and is likely to be a star witness for the government at Benzer’s trial.

His sentencing and those of 27 other defendants who pleaded guilty are being put off until after the trial so they can fulfill their agreements to cooperate with prosecutors.

Many of the defendants will testify.

One defendant who pleaded guilty, Las Vegas attorney David Amesbury, hanged himself at his brother’s property in Northern California in March.

Kim was partners with Amesbury and Benzer in a struggling courthouse restaurant.

Amesbury was one of four people targeted in the investigation who have died under mysterious circumstances.

Quon, described by prosecutors as one of the masterminds of the takeover scheme, also killed herself in March under the weight of the investigation. She had not been charged at the time.

Robbi Castro, a former board member at Vistana, died of a drug overdose in 2010.

Investigators have said they do not believe the deaths were connected.