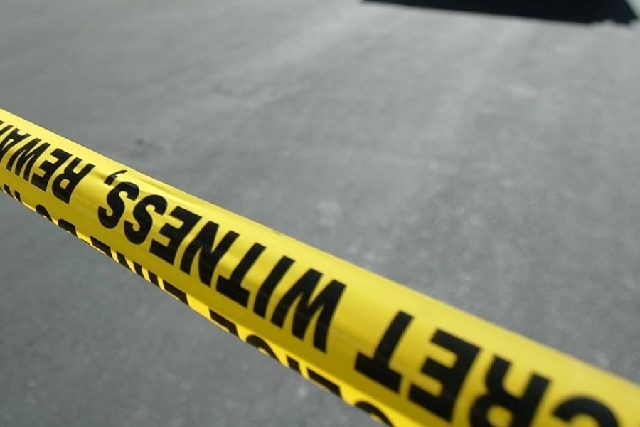 The east valley neighborhood where the dead body of a homeless man was found inside a dumpster Monday night is overrun with vacant lots, overgrown weeds and that one abandoned, boarded up apartment complex across the street: C & J’s apartments.

Now a small set of flowers has been added to the dreary landscape to remember Carl Pane Simon, 50, whose death is being investigated as a homicide by the Metropolitan Police Department.

The dumpster, now in evidence, has been towed away and the spray-painted word “dumpster” remains on the pavement.

“It’s being treated like any other crime scene,” said Larry Hadfield, a spokesman for the police department. “It needs to be processed and go through a forensic analysis.”

Simon died from asphyxiation and blunt-force trauma to the head, according to the Clark County coroner’s office.

His body was discovered about 5 p.m. by someone sifting through the dumpster in the 1700 block of Ringe Lane, just north of Nellis Boulevard and Owens Avenue.

In a city where the homeless population reaches well into the thousands, ranking in the top 10 nationwide according to National Alliance to End Homelessness, police said investigators act on tips and try to develop them as best they can, approaching the homicide just like any other homicide.

As for the neighbors who live along Ringe Lane, they could only speculate as to who Simon was, although one thing is certain: there are plenty of homeless people who push their shopping carts up and down the side streets, looking for aluminum cans to recycle for money or for something to eat.

Was it the homeless man with the plastic construction hat who lived in C & J’s apartments up until a few weeks ago — before it was boarded up? asked a worried Maria Birrueta, 52, who lives across the street from the dumpster.

“He’d come knocking on our doors occasionally for food,” she said. “I haven’t seen him, come to think of it, in at least a few weeks.”

Whoever Simon was, someone apparently knew him well enough to take the time to place flowers at the scene.

“One way of finding him, is to see if there was any medication in his name,” said one woman, who works for HELP of Southern Nevada, which helps place the homeless into shelters. “If he was on a medication, then there’s a chance that one of the shelters has a record of him.”