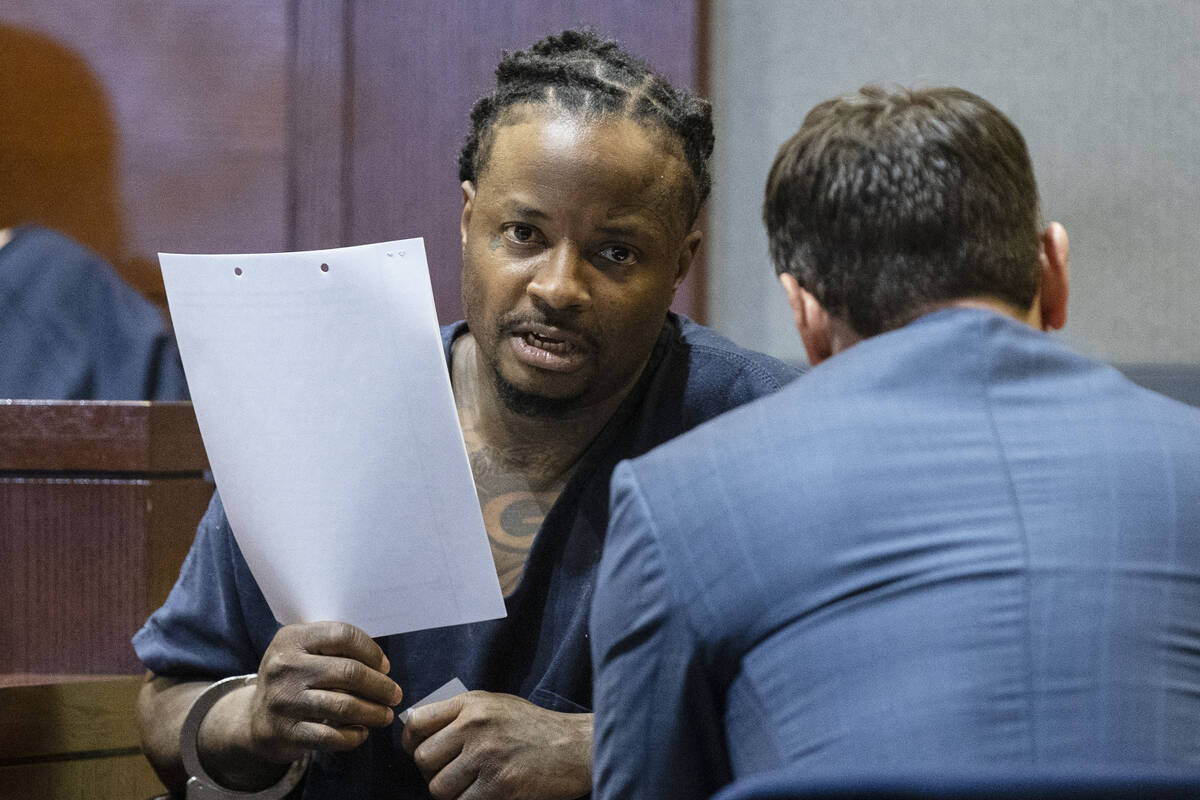 Lee Wilson talks to his attorney, Josh Tomsheck, during his court appearance at the Regional Justice Center on Thursday, March 3, 2022, in Las Vegas. Wilson was arrested Tuesday in connection with a shooting that killed one and injured 13. (Bizuayehu Tesfaye/Las Vegas Review-Journal) @btesfaye 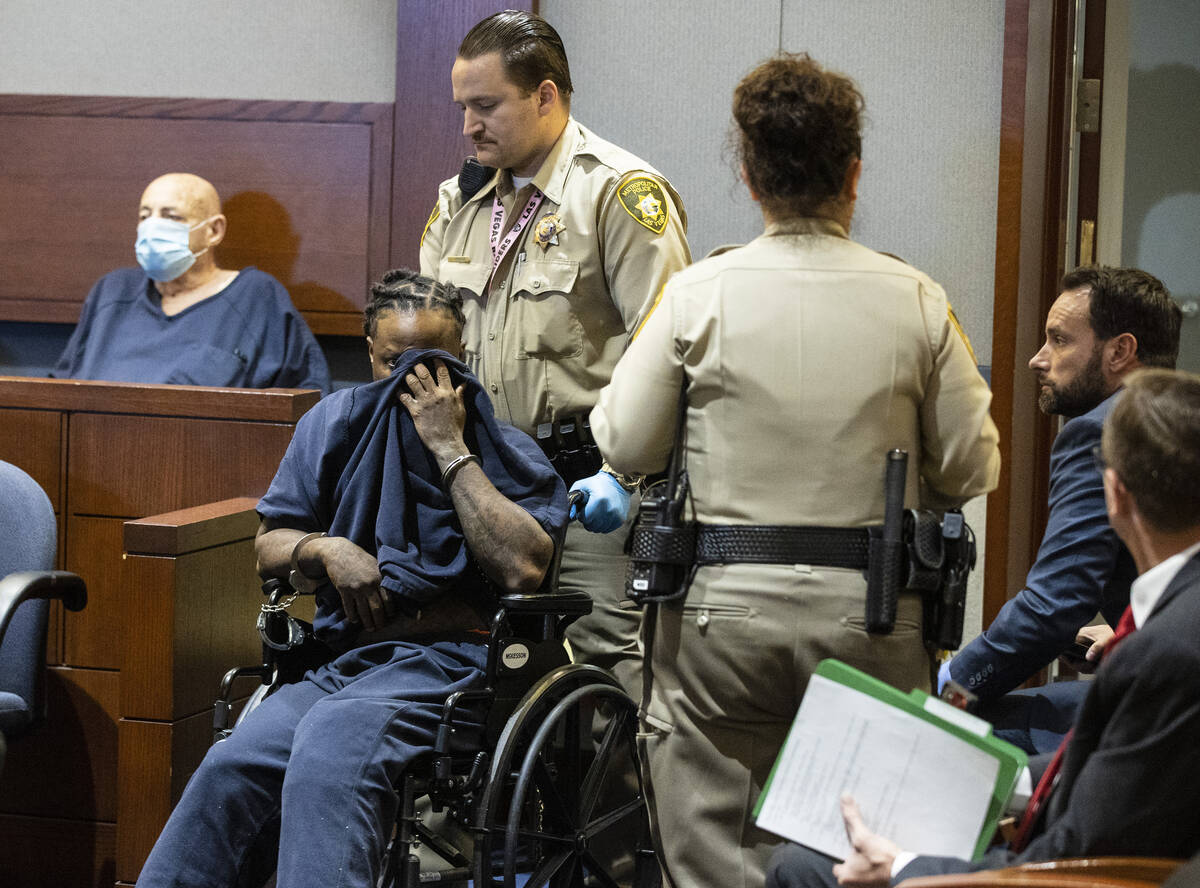 Lee Wilson, a suspect in the Saturday shooting at a hookah lounge on Sahara Avenue, covers his face as he is led into a courtroom at the Regional Justice Center as his attorney, Josh Tomsheck, right, looks on Thursday, March 3, 2022, in Las Vegas. (Bizuayehu Tesfaye/Las Vegas Review-Journal) @btesfaye 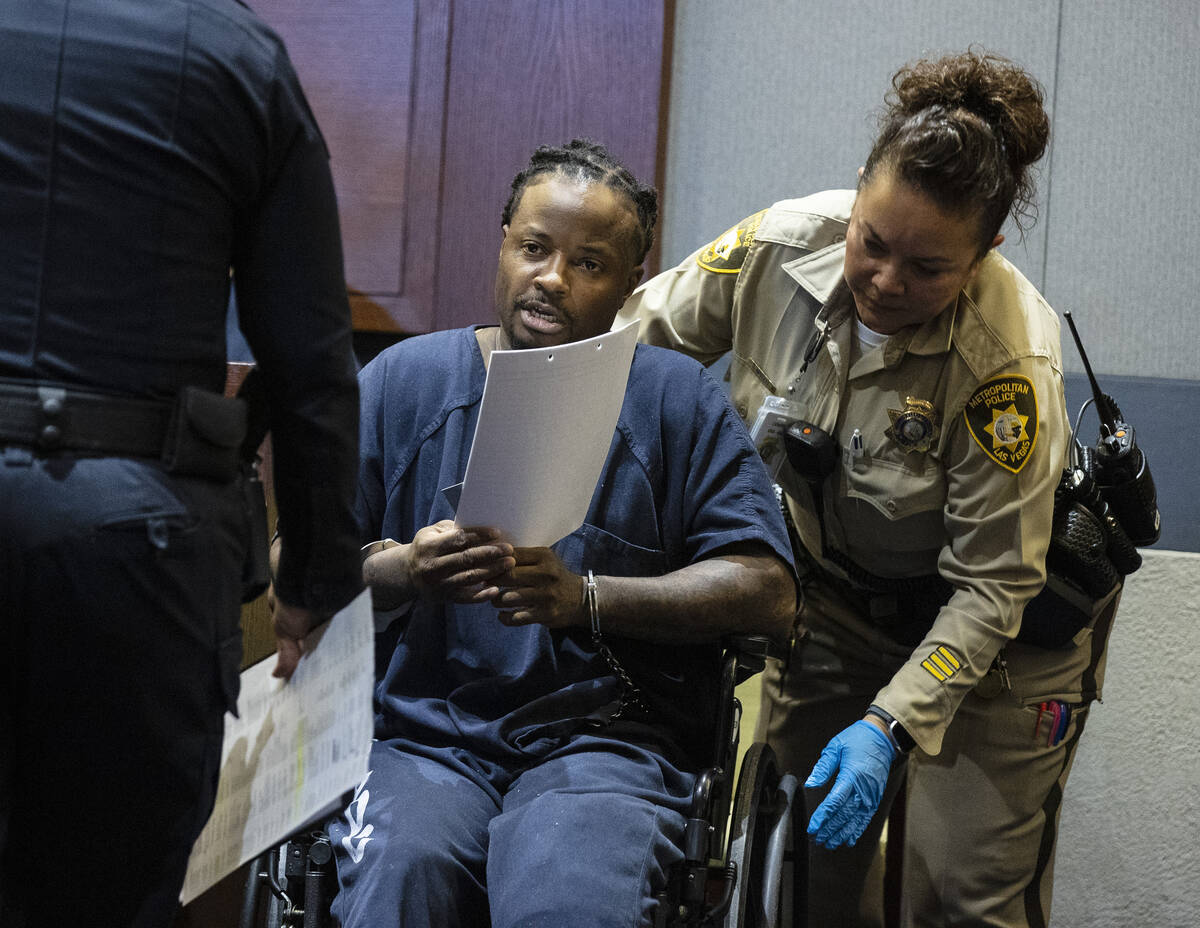 Lee Wilson, a suspect in the Saturday shooting at a hookah lounge on Sahara Avenue, is led into a courtroom at the Regional Justice Center on Thursday, March 3, 2022, in Las Vegas. (Bizuayehu Tesfaye/Las Vegas Review-Journal) @btesfaye

A 44-year-old man arrested in connection with a shooting that killed one and injured 13 said Thursday that he also was shot in the gunfire.

“Your honor, you know I was shot at, too,” said Lee Wilson, who used a wheelchair during his court hearing. “I was shot six times.”

Wilson was arrested Tuesday in connection with a shooting Saturday at Manny’s Glow Ultra Lounge & Restaurant, 953 E. Sahara Ave., the Metropolitan Police Department has said. It was the largest shooting in the Las Vegas Valley since the Route 91 Harvest festival attack in October 2017, which resulted in the deaths of 60 concertgoers.

Wilson is charged with one count of murder and 12 counts of attempted murder, court records show.

“This is an ongoing investigation and additional arrests are expected,” Las Vegas police said in a statement announcing his arrest.

The shooting broke out at about 3:15 a.m. following an argument at a private party, Metro Capt. Dori Koren has said. A dozen people were sent to Sunrise Hospital and Medical Center, and two were sent to University Medical Center.

Demetreus Beard, 33, died at Sunrise from multiple gunshot wounds, according to the Clark County coroner’s office.

At Thursday’s court hearing, Las Vegas Justice of the Peace Joe Bonaventure ordered Wilson to be held without bail. He said the defendant has a “significant” criminal history, including 82 arrests in Clark County since 1995 and nine felony convictions.

His prior history includes an arrest in 2003 for shooting two dogs and a 2008 case involving a charge of assault with a deadly weapon, court records show.

In 2019, Wilson pleaded guilty to discharging a firearm into an occupied vehicle after he and two others were accused of shooting two men the previous year, court records show. He was sentenced in 2020 to a minimum of one year in prison.

He is scheduled to appear in court again on March 17.