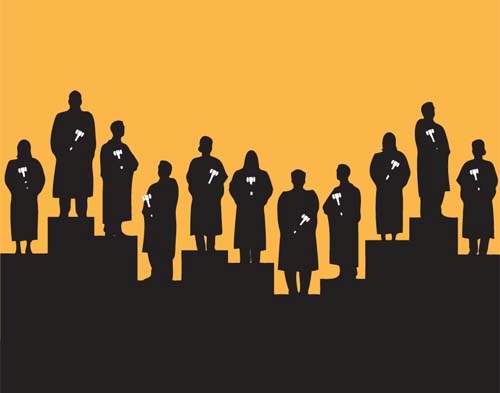 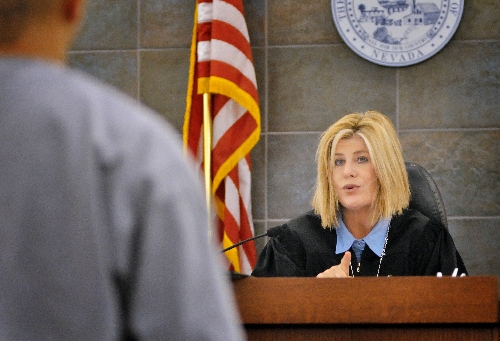 Edwards clearly never got the chance to participate in the Review-Journal’s 2011 Judicial Performance Survey. With the safeguard of anonymity, local attorneys wrote comments blistering the 14 Las Vegas justices of the peace. Some called various judges fascists, juiced up and, in one case, not a convicted criminal.

Despite negative comments, however, all but one judge received passing grades.

Janiece Marshall received the lowest retention rating of the Las Vegas JPs. She’s the newcomer who in a 2010 election defeated incumbent Tony Abbatangelo, who was popular at least among lawyers.

The electorate bounced Abbatangelo from his judgeship after a 2009 conviction of misdemeanor battery-domestic violence. But Abbatangelo consistently scored well in the survey; in 2010, 71 percent of the lawyers recommended he be re-elected.

In 2011, only 45 percent of the 96 lawyers who rated Marshall recommended she be retained, noting in the survey’s comments that she wasn’t, well, Abbatangelo.

“Judge (Abbatangelo) had criminal issues but was a decent judge,” a survey taker wrote, before making some derogatory comments about Marshall.

In scoring specific judicial traits, more than half the lawyers rated her less than adequate on those closely related to competence: coming to court prepared and weighing all arguments before making a decision; making appropriate rulings; properly applying law; and explaining her decision.

The first-year judge was not shy about addressing Abbatangelo’s supporters, whom she believes accounted for the low scores and negative comments.

“I went through (the survey) with an open mind,” hoping for constructive criticism, Marshall said. The judge noted that she didn’t believe 96 attorneys in total had appeared before her, yet that’s how many responded to her portion of the survey.

“There still is some resentment, loyalty. … I unseated a very popular (15)-year judge. I understand that’s kind of reflected in” the survey, Marshall said. “I hope on my next evaluation, I’m evaluated on my performance.”

Still, some lawyers seemed willing to move on from Abbatangelo and embrace Marshall. One wrote, “You had no business beating Judge Abbatangelo. But WOW am I glad you did. Fair. The only JP who actually does not bend over for the DA’s office or police. Makes us ALL do our jobs.”

Abbatangelo, who now works for Glenn Lerner, a lawyer who famously calls himself “The Heavy Hitter” in advertisements, has appeared in Marshall’s courtroom.

Marshall said the former judge acted professionally, but it was nevertheless awkward to see him in her courtroom the first time.

Most veteran judges received scores similar to those they received in the past. Joe Sciscento, who is known for his affable personality, received the highest retention rating of 91 percent from the 151 lawyers who rated him. He also got very high scores on specific traits.

Sciscento said the high score is reflective of his clerks and staff. Still, he wasn’t above receiving negative comments.

“Judge Sciscento is a good judge, but at times does not take the courtroom serious enough,” wrote one lawyer.

The judge said he recognized that too many lawyers still saw him as the fun-loving defense attorney. While he has worked to create a more serious decorum in his court, Sciscento admitted, “Sometimes you joke a little too much.”

Sciscento is one of five Las Vegas JPs whose seats are up for election this year . The others are William Jansen, Deborah Lippis, Melanie Tobiasson, and Ann E. Zimmerman. Sciscento, Tobiasson and Zimmerman say they will run for re-election. Jansen and Lippis did not respond to interview requests. The filing period for candidates begins Tuesday and runs through Jan. 13 .

Zimmerman said if she wins a third term it will likely be her last.

“There’s got to be life after this,” she quipped.

Zimmerman’s retention score was three points lower — 68 percent — than her 2010 score. Her scores on key traits are also a little worse; a third of the 118 lawyers rating her in 2011 judged her less than adequate on properly applying the law.

Zimmerman said she couldn’t say why her scores dropped, but noted that more lawyers responded to the survey in the past. Zimmerman said she feels she is a better judge now simply because, as her own worst critic, she is constantly working to improve.

Comments show some lawyers think highly of her. Zimmerman said some of the other, negative comments probably result from certain tendencies she has as a judge.

One tendency is to not grant numerous continuances.

She said defense lawyers also dislike her ordering convicted prostitutes to stay out of trouble for 90 days instead of just fining them. That way they can’t go right back out to work, the judge said.

Several lawyers said Tobiasson favored prosecutors too often in her rulings. She disagreed, saying she’s not afraid to rule in favor of the defense if it’s the correct legal judgement.

Other lawyers said Tobiasson was a fair judge with compassion for defendants, but one said she doesn’t care about poor people.

Tobiasson took exception to the latter comment and cited her specialty veterans court, which deals mostly with homeless veterans and getting them the help they need.

Jansen received a 73 percent retention rating from 103 lawyers, similar to his 2010 score.

He took the bench 26 years ago after a career as an FBI agent. While several attorneys suggested it was time for Jansen, 76, to retire, others remain pleased with his performance.

“A living legend,” one lawyer wrote.

Lippis’ recommendation for re-election dropped from 79 percent in the 2010 survey to 69 percent in 2011. Anonymous comments from some of the 107 lawyers who rated her did not reveal any reason why.

Her worst score both years regarded courtesy; about a fifth of the lawyers in 2011 ranked her insufficient in that regard. Yet more than twice as many gave her high marks on the same point, and the majority of comments about Lippis were positive.

One lawyer wrote, “One of the best Justice Court judges. Fair and Tough when she has to be — Yet, kind and under­standing too.”

Lippis, 62, has been on the bench almost 20 years, and several attorneys suggested it might be time to step down.

“Judge Lippis is getting harder to reason with as she gets older. Don’t think she really wants to be here any more,” one lawyer wrote.

Chief Justice of the Peace Karen Bennett-Haron, who received a 60 percent retention rating from 148 lawyers, had scores that suggested the attorneys tend to love her performance or hate it.

Written comments also were at both ends of the spectrum. One lawyer said she should be “cloned,” but another hoped the voters removed her from the bench.

“I won’t even attempt to get inside the minds of people who responded” to the survey, she said. “In terms of my own professional improvement and evolution, I think I’m always striving to improve and be better. That’s something I do with or without the survey.”

Bennett-Haron praised her fellow veteran jurists for taking a supportive role for the four new judges on the court. Three of the four lowest retention scores, however, went to new judges, including Marshall.

New JP Conrad Hafen got the second lowest retention score, 58 percent, from the 118 lawyers who rated him.

He and new judge Suzan Baucum were assigned to handle civil cases. Baucum received a 71 percent retention score from 91 attorneys.

Hafen, a career prosecutor, had to adjust quickly to the new civil calendar.

“It had been 18-plus years since I had done anything with civil procedure. So at the very beginning I had to go back and re-familiarize myself with the rules of civil procedure,” he said. “I feel a lot more comfortable in the civil cases than I did maybe in January.”

In response to survey results, Hafen said he hopes to improve next year in explaining the basis for his decisions. Forty percent of the lawyers rated him less than adequate for that.

And from 42-45 percent rated him less than adequate on making appropriate rulings, properly applying the law, and coming to court prepared and weighing all evidence before rendering a decision.

Hafen said his first year has been a constant learning process: “A judge needs to continue to grow, whether they’ve been on the bench for a year or for 20 years.”