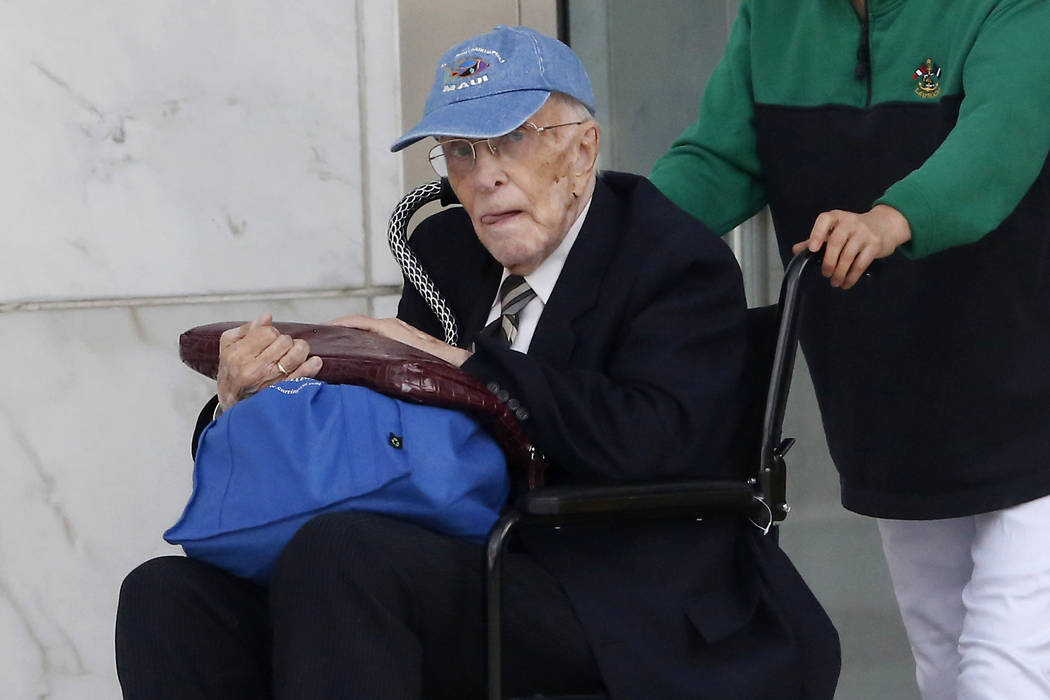 Dr. Henri Wetselaar, a 93-year-old pain management practitioner, was convicted Thursday of supplying drug addicts and dealers with powerful opioids through a profitable scheme that relied on his prescription pen.

A Netherlands-born World War II veteran, Wetselaar had tried to convince jurors that his behavior reflected his age and outdated medical education, rather than his involvement in a conspiracy to distribute painkiller pills.

But the jury needed less than one day to convict him of all 11 drug, money laundering and related counts contained in a 2011 federal indictment against him, his medical assistant and a local pharmacist.

Wetselaar’s medical assistant, David Litwin, was convicted of eight drug counts for his involvement in the conspiracy. Senior U.S. District Judge Kent Dawson declared a mistrial in the case against pharmacist Jason Smith after jurors failed to return a verdict on a single count of conspiracy to distribute oxycodone.

The guilty verdicts indicate jurors agreed with prosecutors’ assertions that Wetselaar, with Litwin’s assistance, prescribed large doses of oxycodone and Xanax to scores of phony patients who complained of back pain. They did so, the jury agreed, knowing full well the prescriptions would end up in the hands of drug dealers who sold the pills on the streets.

Depending on the loyalty of the customer and the potency of the painkiller, the oxycodone prescriptions cost anywhere from $100 to $400 a pop. The jury concluded that Wetselaar used some of the earnings, which authorities say reached at least $260,000 in a year, to buy a house.

The guilty findings should mark the end of the doctor’s six-decade medical career, which was active as recently as February. In arguing for Wetselaar’s detention pending sentencing, Assistant U.S. Attorney Cristina Silva told the judge: “Dr. Wetselaar has continued to engage in the practice of medicine … after indicating to this court that he had competency issues.”

Wetselaar and Litwin sat still next to their lawyers, displaying no visible emotions as the verdict was read. Litwin had pushed the doctor’s wheelchair into court after jurors announced they had reached a decision around 3 p.m. Upon arriving in court, Wetselaar took off his baseball cap, pulled out a blue plastic brush, and combed the longish strands of white hair that remain on his balding head.

Dawson ordered both of them remanded to custody until their sentencing on June 21.

“Regardless of personal feelings or emotions, I am bound by my oath to administer the laws as they are written,” Dawson said, after defense attorneys argued for their clients’ release.

Litwin was handcuffed immediately, and deputy U.S. marshals were working to accommodate Wetselaar’s failing health, which caused several trial delays as he was in and out of the hospital.

The jury found that the government failed to prove that Litwin made false statements to a government agency. Jurors also returned a not guilty verdict on one of the nine drug counts Litwin faced.

A new trial date of May was set for Smith, who managed the pharmacy where Wetselaar and Litwin directed patients to fill their prescriptions.

Dawson said he initially “thought the evidence against Smith was very, very weak.”

But, he said, after hearing the defense present its case:

“The question is: Was he so grossly negligent and reckless that he should be held to a criminal standard for his conduct?”