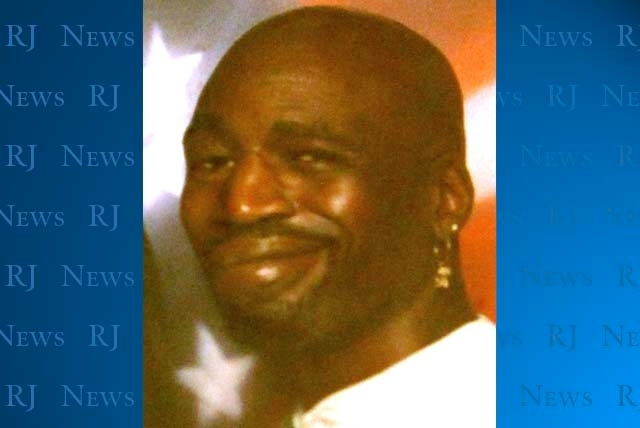 Stanley Gibson, shown in this undated photo, was killed in a 2011 police shooting. 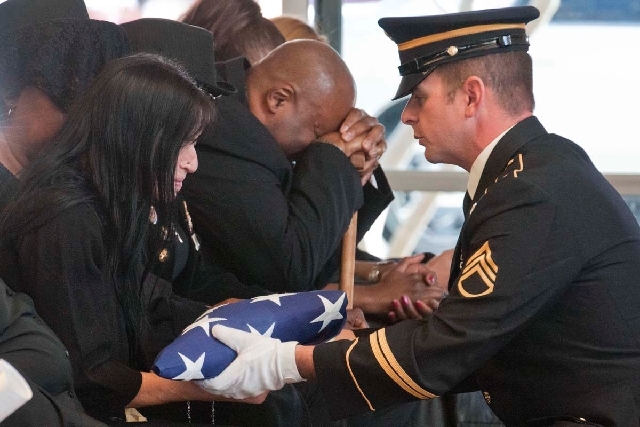 Stanley Gibson's widow, Rondha Gibson, receives the flag from his coffin from a member of the U.S. Army honor guard at the Veterans Cemetery in Boulder City on Dec. 23, 2011. Gibson's brother, Rudolph "Rudy" Gibson, is overcome with grief in background. 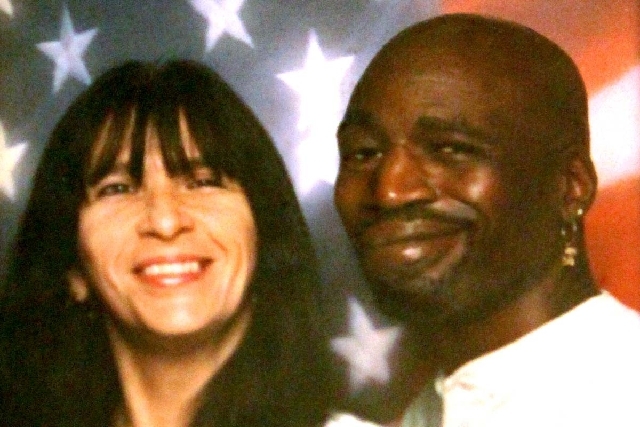 Stanley and Rondha Gibson are shown in this undated photo.

Police officers involved in the fatal shooting of Stanley Gibson received the most severe penalties for a police shooting in the history of the Las Vegas Metropolitan Police Department.

Lt. David Dockendorf, who oversaw the failed plan to extract Gibson from his pinned-in Cadillac, will be demoted two ranks, to officer.

Sgt. Michael Hnatuick, who devised the plan, was given a major suspension of 40 hours without pay.

But only Arevalo used deadly force, and only he will face termination, he said.

“When discipline is warranted, these decisions are never easy,” Gillespie said. “But as difficult as it may be, people must be held accountable when the situation dictates. And this situation dictates just that.”

The Use of Force Board and Tactical Review Board each met two weeks ago to discuss the December 2011 shooting. The sheriff accepted the boards’ recommendations, he said.

The officers were notified of the department’s decision Friday afternoon during a face-to-face meeting with the sheriff. Arevalo’s meeting with Gillespie took less than 10 minutes.

Gillespie acknowledged Arevalo’s punishment during a brief press conference, but said he was currently limited in discussing Dockendorf and Hnatuick’s punishments.

“Each one of them has the right through due process to go through grievance procedures and arbitration in respect to disciplinary matters,” he said.

The sheriff promised to discuss their discipline after the officers’ appeals were done.

Dockendorf and Hnatuick can file grievances with their unions.

Arevalo will have the opportunity to make a case for lesser discipline at a pre-termination hearing in coming weeks. The department’s strongest punishment short of firing is a major 40-hour suspension without pay, which officers typically cover by using paid time off.

No matter what the pre-termination board decides, Gillespie has the option to save Arevalo’s job or dismiss him outright. If the sheriff fires the officer, Arevalo could appeal the decision to binding arbitration.

“This is an example of the sheriff trying to make peace with special interest groups instead of standing up for his employees,” said Collins, executive director of the Las Vegas Police Protective Association. “(Arevalo) is being used as a scapegoat.”

Stanley Gibson’s brother, Rudy Gibson, said he was surprised and relieved by the news.

“It’s been a tough month, and then this popped up and I said, ‘Finally, something,’” said Gibson, who along with Stanley’s widow Rondha Gibson is suing the department.

“(Arevalo) doesn’t deserve to be a cop, and he probably shouldn’t have been a cop for a long time,” he said.

Although Arevalo was the focus of public criticism in the wake of Gibson’s death, Dockendorf’s supervision was intensely scrutinized within the department. Many officers blame him for escalating the confrontation and for putting Arevalo in a bad position. They question his ability to ever again be a supervisor.

Hnatuick, although not the top supervisor at the scene, oversaw the initial police response.

Gibson, 43, was killed Dec. 12, 2011, during a standoff at the Alondra apartments, 2451 N. Rainbow Blvd., near Smoke Ranch Road, which began with a mistaken attempted burglary report.

Gibson suffered from post-traumatic stress disorder, and his mental condition had deteriorated in the weeks before the shooting. Lost, the Gulf War veteran drove into the apartment complex near his home and was circling the parking lot when officers arrived and boxed his Cadillac between two patrol cars. Gibson refused to get out of the car.

Officers at the scene didn’t know if Gibson had a weapon, and didn’t know that he was mentally ill even though he had two recent contacts with their department, one just hours earlier.

Officer Malik Grego-Smith was to shoot out the Cadillac’s rear window with a beanbag shotgun, and Hnatuick was to blast pepper spray into the car.

Arevalo was to provide cover with his AR-15 on the left side of Gibson’s car, and officer John Tromboni was set to cover the approaching officers with a standard 12-gauge shotgun.

But before the plan was implemented, Dockendorf arrived, took control of the operation and pulled the officers back.

Arevalo, assuming the plan had been called off, asked to provide cover on the right side of the command post, separated from his supervisors by a concrete trash bin enclosure. Hnatuick said yes.

A short time later, Gibson, who had been lying down in his car, sat up and began revving the engine and spinning the wheels. Gibson had done this several times before Dockendorf was on scene.

He reacted by grabbing Grego-Smith and yelling into his radio, “All right, units, we’re moving in. Shoot.”

Dockendorf meant only that Grego-Smith was to shoot the beanbag gun. Many officers later told detectives their radios were not working properly and they never heard Dockendorf. Arevalo refused to speak to detectives after the incident, so it’s unclear what he heard.

A split-second after Grego-Smith shot out the Cadillac’s rear passenger window, Arevalo fired his rifle, hitting Gibson four times. He died at the scene.

The review comes about a month after Gillespie signed off on the termination of officer Jacquar Roston for shooting Lawrence Gordon in November.

Roston, investigating a domestic dispute, shot into a car after mistaking the shine from a label on Gordon’s hat for a weapon. Gordon, who was hit in the leg, wasn’t charged with a crime.

Las Vegas officers have rarely been disciplined for a shooting, and Gillespie, who has been with the department more than 30 years, said last month that he couldn’t recall any officer fired for an on-duty shooting.

The department adopted new policies in the wake of a U.S. Department of Justice review that was critical of its use-of-force policies, which itself came after publication of a Review-Journal investigation of police shootings.

Both the Justice Department and the newspaper found the board lacked accountability and transparency, and was seen as a rubber stamp justifying all shootings. In the past, the force board only determined whether a shooting was “justified” or “unjustified.”

The department changed the classifications to “administrative approval” and “administrative disapproval,” and the board offers feedback on tactics, decisions and training. The changes were aimed at examining all of the officer’s actions rather than simply issuing a blanket approval or rare disapproval.

The PPA roundly criticized the department’s review of Roston’s actions, which was the harshest critique ever for an officer in an shooting.

Collins said in April that Roston saw Gordon reaching under his seat and perceived there was a weapon. Nevada law permits use of deadly force in that scenario.

“If Metropolitan officers are no longer going to use that standard, we’re going to bury a lot of cops,” he said last month.

And it appears the union will do more than criticize the process from afar. The PPA recently hired a private detective to interview civilian board members who heard Roston’s case. But panel members sign a confidentiality agreement, and none would talk.

It’s unclear what the PPA hoped to get from the civilians, but the union has been active in building their defense. No Las Vegas officer has ever been fired for a shooting, even of an unarmed person, and that’s part of the PPA’s argument in saving the officers’ jobs.

Collins said the union, backed by former District Attorney David Roger, will fight for Roston and Arevalo to keep their jobs. The department hasn’t made a case for firing either officer, he said.

Arevalo’s case has already been scrutinized by a grand jury and they found nothing criminal, Collins said.

“Were some tactical errors made? Absolutely. Would they warrant termination? Absolutely not,” he said.