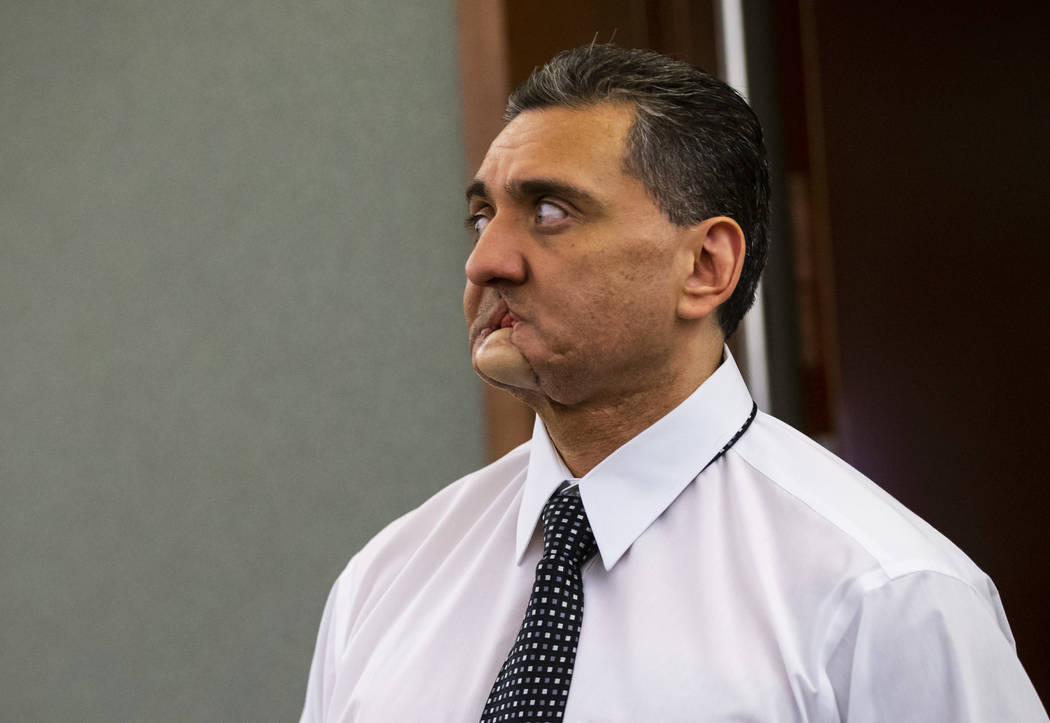 Manuel Mata III enters the courtroom for the penalty phase of his trial at Regional Justice Center in Las Vegas on Tuesday, Nov. 19, 2019. Mata was found guilty on multiple counts, including second-degree murder in the slaying of Maria Flores, his girlfriend at the time, and first-degree murder in the death of her daughter, Elizabeth Gomez. The death penalty is being considered for the first-degree murder charge. (Chase Stevens/Las Vegas Review-Journal) @csstevensphoto 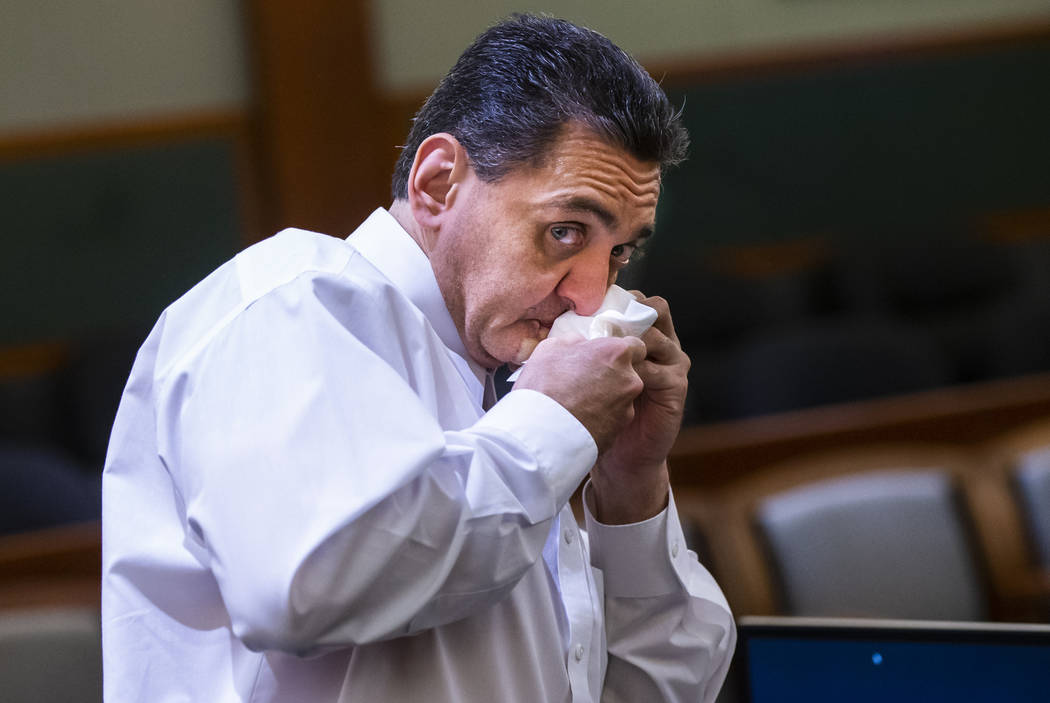 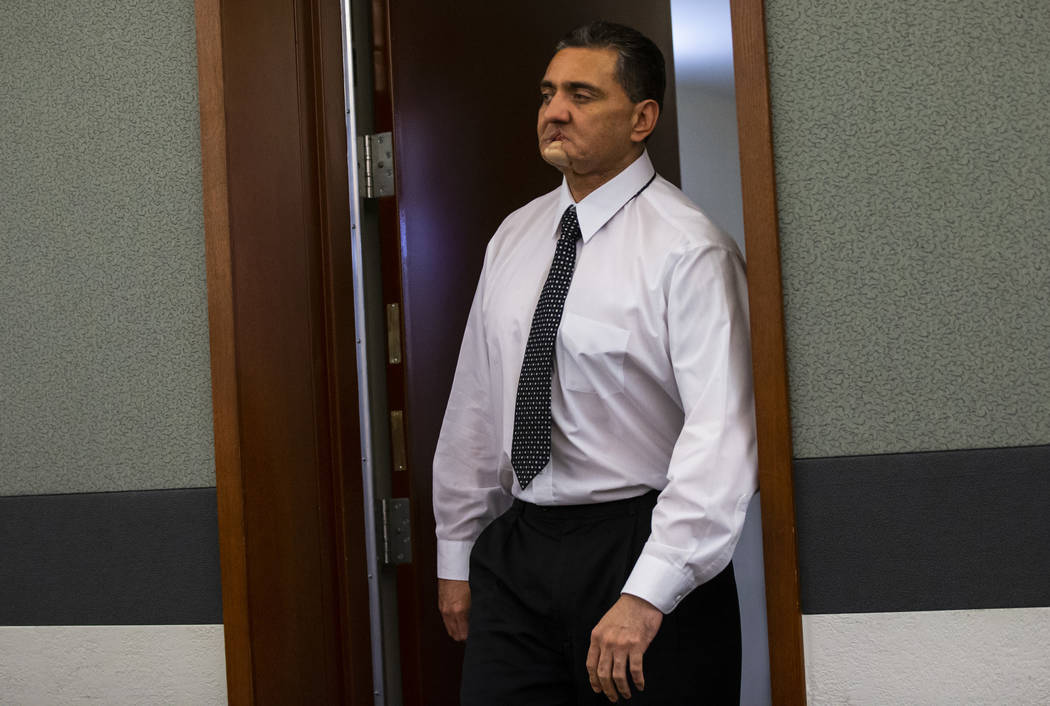 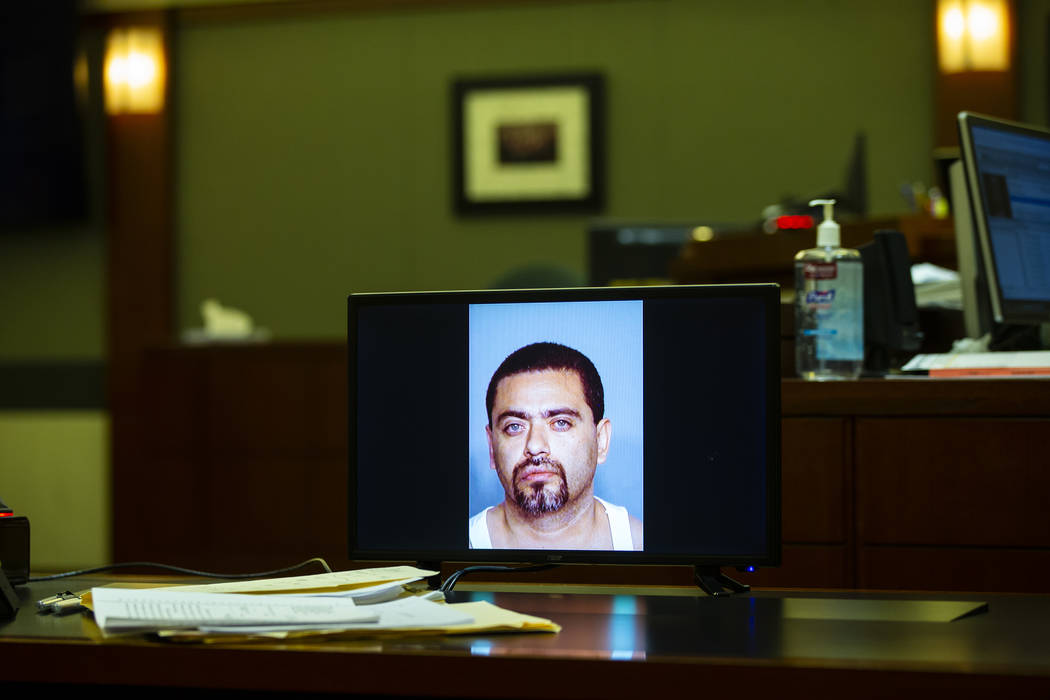 A photo of Manuel Mata III is displayed during the penalty phase of his trial at Regional Justice Center in Las Vegas on Tuesday, Nov. 19, 2019. Mata was found guilty on multiple counts, including second-degree murder in the slaying of Maria Flores, his girlfriend at the time, and first-degree murder in the death of her daughter, Elizabeth Gomez. The death penalty is being considered for the first-degree murder charge. (Chase Stevens/Las Vegas Review-Journal) @csstevensphoto 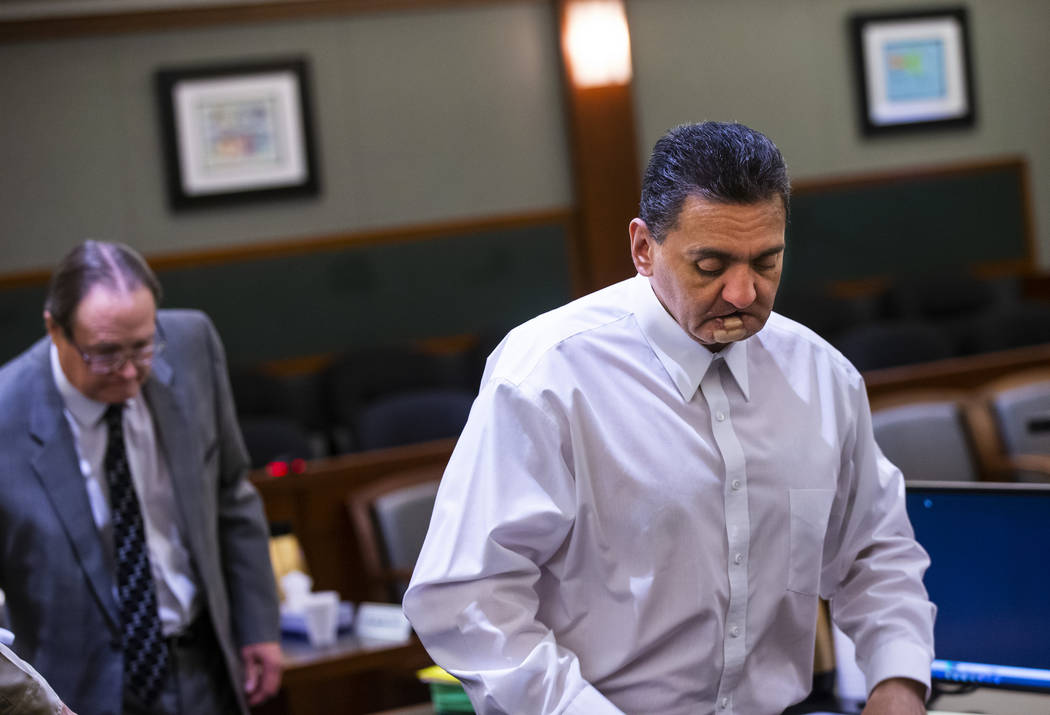 Manuel Mata leaves the courtroom during a break in the penalty phase of his trial at Regional Justice Center in Las Vegas on Tuesday, Nov. 19, 2019. Mata was found guilty on multiple counts, including second-degree murder in the slaying of Maria Flores, his girlfriend at the time, and first-degree murder in the death of her daughter, Elizabeth Gomez. The death penalty is being considered for the first-degree murder charge. (Chase Stevens/Las Vegas Review-Journal via AP)

When she was 4, Manuel Mata III shot her in the neck after fatally shooting her teenage sister, Elizabeth Gomez, and their mother, Maria Flores.

Little Sophia awoke from a coma on the day of her mother’s funeral in spring 2013, and she still struggles with memory loss, self-expression, comprehension and anxiety, and has trouble with her balance, her aunt, Maria “Lisa” Retana said.

“She was robbed of a normal childhood,” Retana told jurors Tuesday as they watched videos of Sophia before and after the shootings.

The jury that found Mata guilty this week also is tasked with weighing the punishment Mata should face for first-degree murder in 17-year-old Gomez’s death.

Gomez, a Valley High School senior who dreamed of being a fashion designer, wanted to shop for a graduation dress before Mata killed her with a shotgun in her bedroom, her sister, Marina Gomez, testified.

“But she never made it,” the younger sibling said, adding that she walked in her sister’s place during the school’s ceremony that year. “It’s just been really hard without her.”

After shooting his girlfriend and her daughters, Mata fired a shotgun blast into his chin and survived with a facial deformity.

Prosecutors seeking the death penalty tried to show that the now-convicted 45-year-old killer had a history of abusing and threatening women in his life dating to the mid-1990s.

“I promise you will die,” he told one of his ex-wives, Idalia Luz Guerrero, in 2009. “I will only have to pick up the phone and my hands will be clean. The lake is very big, and they will never find you.”

His defense attorneys argued that an intruder killed Flores and her daughter and shot the younger child before Mata arrived home, discovered the crime scene and shot himself.

On Tuesday, they asked jurors to spare the life of Mata, whose service in the U.S. Army included an eight-month tour in Afghanistan.

Chief Deputy District Attorney Marc DiGiacomo told jurors that Mata had “a very lengthy history of violence against women” that “almost always includes a threat to kill them.”

A day earlier, Mata was found guilty of first- and second-degree murder, along with one count of attempted murder with the use of a deadly weapon, child abuse and one count of trafficking a controlled substance.

Investigators found 41 grams of cocaine in the home, along with 13 firearms, including three reportedly stolen weapons. Jurors found Mata not guilty of three counts of possession of a stolen firearm.

At trial, prosecutors said Mata shot Flores, who had prepared to end their three-year relationship, on the morning of June 1, 2013. Flores had packed suitcases and taken their pictures down from the wall of their home on the 5500 block of Cotton Street in east Las Vegas.

She had raised five daughters, mostly on her own, family members testified.

“To all of you, she was just a person whose life was taken on June 1,” Marina Gomez told jurors. “But to us, she was our world.”