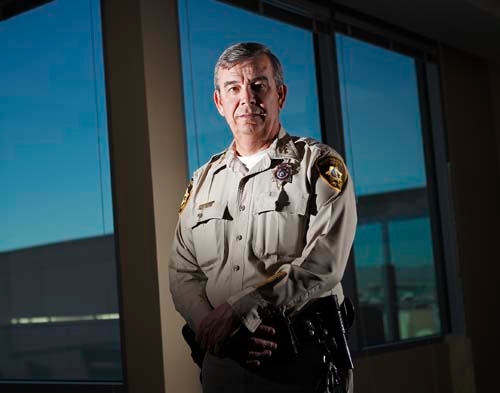 It was a multimillion-dollar mistake. And the timing couldn’t be worse.

On Oct. 11, Gillespie informed the CEO of the Harris Corp. that his company’s Desert Sky radio system cannot meet his department’s needs. That’s a sharp change from past statements and advice to officers to remain patient while system bugs are fixed.

"I believe we’ve given Harris every opportunity to make the system work," Gillespie said. "It’s just not a reliable system."

Unveiled in the summer of 2010, the $42 million Desert Sky digital system – based on Harris’ OpenSky system marketed to emergency service agencies nationwide – was touted as having expanded channel capacities, enabling advanced data communications for computers in patrol cars and other features unavailable with the agency’s aging analog system.

Desert Sky’s data capabilities have seen mixed results, but the voice communication between officers is the bigger problem. While improved in the past two years, the system still is not up to snuff for an agency whose officers talk on the radio 50,000 times every day, the sheriff said.

Complaints are common among patrol cops, who say the faulty system endangers their lives.

"It’s honestly going to get an officer hurt," said one patrol officer who asked not to be identified. "It’s just a matter of time. We’re worried about getting into a situation where we need help and no one can hear us."

The decision to dump Desert Sky comes in the midst of the Metropolitan Police Department’s worst budget crisis ever. The county wide agency’s projected budget of $502 million for fiscal year 2013-14 is $46 million more than projected revenues.

Police officials say hiring a vendor to build a replacement voice transmission system could cost $15 million to $20 million, and take 16 to 24 months.

Assistant Sheriff Joseph Lombardo, who oversees the Las Vegas police Radio Systems Bureau, acknowledged the project could "require additional funds" at a time when the department is counting every penny.

"We’re in discussions with Harris for a solution," Lombardo said. "It depends if they can meet our terms or not. If we come to impasse, we could explore other vendors."

The relationship between Harris and the department is not dead, however. The department will retain Desert Sky for data transmission, but needs a new system to handle day-to-day voice communication.

Harris might even be the company entrusted with that job. While it struck out with Desert Sky, Harris could build the infrastructure for the state-of-the art Project 25 – or P25 – radio system that has become the new federal standard for public safety agencies. P25 has proven to be effective in major urban settings, whereas OpenSky has not.

Gillespie wouldn’t comment on companies that might build the new system, but said a decision would be made within 30 days. The potential cost is "under discussion," he said, as is the source of the money.

If Harris won’t build a new voice system at no additional cost, the department would likely hire another vendor – Motorola is a primary competitor of Harris – and cover that bill by suing Harris for failing to build Desert Sky to contract specifications.

A Harris spokesperson did not return a call seeking comment Friday. The status of discussions between the department and Harris was unclear.

"Our desire is to not spend another dime on (Desert Sky). We’re still pursuing that direction," Lombardo said. "There’s still a lot of negotiation questions that have not been answered yet."

The department began looking at updating its radio system around 2003, as its analog system was nearing maximum capacity and the agency was expanding along with Southern Nevada’s population.

The department contracted with M/A-COM Technology Solutions Inc. to design and build its new system, OpenSky. Harris Corp., a Florida-based corporation billed as the leading supplier of radios to the U.S. military, acquired M/A-COM in 2009.

Many other public safety agencies around the country bought OpenSky, and many have been left disappointed with systems dogged by performance and reliability problems.

In early 2009, the state of New York cited technology problems when it terminated a $2 billion contract with M/A-COM to build a statewide communications system.

Lancaster County, Pa., dumped its OpenSky contract in 2008 after spending about 11 years and $14 million on the project.

"It was the cutting edge of a technology," Lombardo said. "It hasn’t been a resounding success."

Patrol officers don’t mince their words when it comes to the technology.

"It’s been a failure. A joke," said the patrol officer who asked for anonymity.

The officer told of a police shooting last year where the officers were caught in a dead zone and unable to radio for help.

In addition to dead zones and dropped calls, officers are also struggling to adapt to the new emergency button.

The radios have an emergency button that will override other radio traffic, but it hasn’t always worked right and requires cops to learn when and how to use it.

"When you’re in a situation and your adrenaline’s flowing and you’ve got tunnel vision, everything you do is muscle memory. And officers weren’t trained to use the emergency button," he said. "Some of us have gotten better, but it’s not perfect."

"That’s why we’re pursuing all our options, because that’s as big a concern to us as it is to the police officers," he said. "The technology just hasn’t gotten us to where we need to be, Harris has been assuring us they can get us there. But a lot of time has gone by."