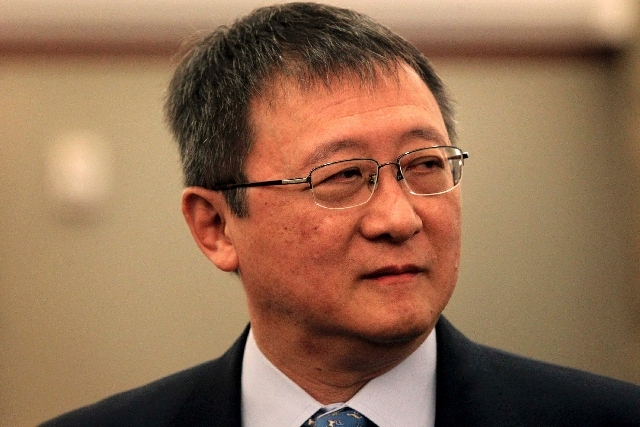 Hong Kong businessman Richard Suen, seen here in June, says he helped Las Vegas Sands win a gambling license in the Chinese enclave of Macau. A jury awarded him $70 million, but Sands is appealing the verdict.

Las Vegas Sands Corp. attorneys’ push Tuesday to discredit former consultant Richard Suen’s credibility highlighted perceived discrepancies with past testimony over matters such as a business plan with an acrylic cover and the meaning of the word “contact.”

A large portion of Suen’s second day of cross-examination homed in on his efforts in the summer of 2001 to find the company an investment partner to enter the Macau market. With Las Vegas Sands Chairman and CEO Sheldon Adelson sitting in the Clark County District Court courtroom much of the afternoon, Suen testified that he personally met with executives of two companies located by an associate, Zhu Zhensheng.

To prepare for the meetings, Suen said he assembled a few pages of what Las Vegas Sands’ plans would encompass, complete with at least one photo of The Venetian on the Strip, placed in a binder with an acrylic cover. However, he said he never saved any copies when the meetings did not produce results.

Suen’s sessions were with top executives of Nam Guan of Macau and the Paul Y. Engineering Group of Hong Kong, both owned by the Chinese government.

Earlier in the trial, Suen testified that this was some of the work he undertook to help Las Vegas Sands gain its lucrative presence in the former Portuguese colony, now the world’s largest gambling market.

He claims that based on terms Las Vegas Sands proposed at the time, the company owes him $328 million, although no contract was ever signed.

Las Vegas Sands attorney Richard Sauber ran through a lengthy list of slides to contrast what Suen is saying now to excerpts from his testimony in the original trial five years ago and previous depositions.

In the first trial, a jury awarded Suen $43.8 million out of the $98 million requested, but the Nevada Supreme Court overturned the verdict in 2010.

The amount at stake has grown because Suen contends that part of his deal involves collecting 2 percent of Las Vegas Sands’ net profits in Macau. At the time, the company’s presence was much smaller.

Sauber zeroed in on select testimony from five years ago, when Suen said he sketched out a crude business plan for Zhu.

“So which is the truth about what you did … as you sit here under oath, did you just do it on a piece of paper and pencil quickly to get it to Mr. Zhu, or did you take it, as you testified here, and put the acrylic binding and pictures and add all those parts to it?” Sauber asked at one point.

“You forgot to mention the acrylic binding when you asked about it in 2008, didn’t you?” Sauber followed.

As this thread continued, Suen said he had traded handwritten drafts with Zhu, partly because Zhu’s Chinese was better so he would handle the final version.

Further, Suen said, he was not asked about the acrylic cover five years ago.

The end product was a booklet that looked professional, although Suen said it was thin on details. As a result, he testified, the two companies were “very interested” but wanted to see the proposal developed.

Sauber also posted on the two courtroom video screens previous testimony that Suen had not had any “contact” with the two potential investors. Sauber dwelled about a half hour on the contrast between that statement and the meetings.

Suen still said that was correct by his understanding of the word “contact,” because he “didn’t know them personally” and had not brought them to the table.

However, in answer to Sauber’s questions, Suen said he had “interacted” with them.

Further, Suen said, he never mentioned the Paul Y. Engineering Group at the previous trial because he was confused about the difference between that name and a different Chinese one that he knew.

But Sauber noted at a later juncture, “These are not the only meetings that you have introduced for the first time at this trial.”

Suen is expected to continue on the witness stand through at least today .