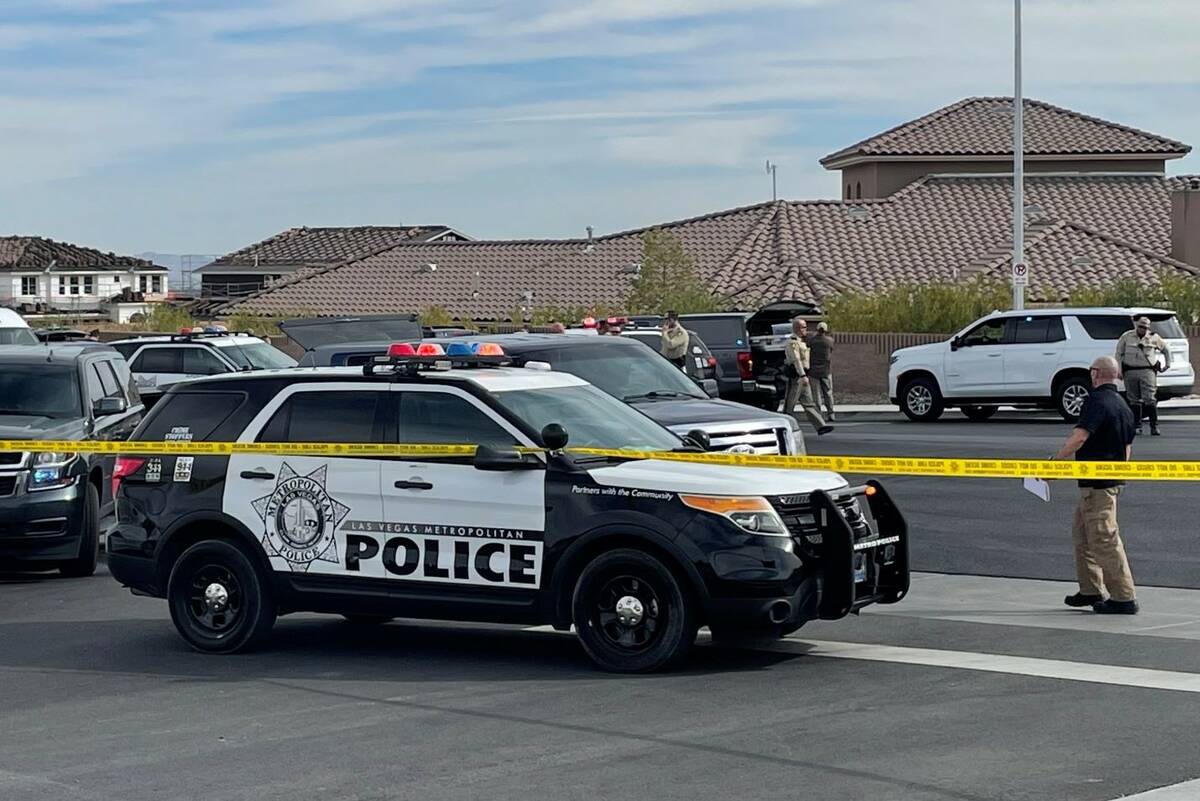 Las Vegas police and the FBI investigate a shooting on the 5000 block of Ruffian Road, near West Ann Road in the northwest Las Vegas Valley on Thursday, March 3, 2022. (Bizuayehu Tesfaye/Las Vegas Review-Journal)

Investors in an alleged $300 million Ponzi scheme filed a class-action lawsuit Monday against a Las Vegas lawyer, who is facing separate federal criminal charges, accused of orchestrating the operation.

The investors who filed the lawsuit in District Court include Elizabeth Lewis, who runs a Henderson cabinet company; Paul Maalouf, a retired law enforcement officer; Brad Maloff, who owns a local tax service, the lawsuit said.

The plaintiffs claim they were investing into the company J&J Consulting, and were told the investments provided money to people who had settled legal claims in personal injury cases and were seeking short-term funding before the settlements were paid.

“In short, the J&J Conspirators marketed and sold interests in purported personal injury settlements while promising 10% to 20% returns paid every couple of months,” the lawsuit said. “Instead of investing the funds as represented, the J&J Conspirators used the money in a classic Ponzi-like fashion, while drawing significant profits.”

The lawsuit accuses Las Vegas attorney Matthew Beasley of controlling the funds through his Wells Fargo account, and soliciting investors with Jeffrey Judd, the president of J&J Consulting.

Earlier this month, Beasley was shot by FBI agents who went to his house to question him about the Ponzi scheme, federal prosecutors have said. The 49-year-old now faces a charge of assault on a federal officer.

According to the lawsuit, the Ponzi scheme began in 2017 and spread to include downstream sellers who were “utilized to lure additional investors.”

Although Judd was not named as a defendant in Monday’s lawsuit, a separate suit was filed Wednesday against Beasley, Judd and multiple companies associated with the men.

Mark Murphy, who filed that suit, claimed he had invested about $700,000 into the company since 2017, and would receive payments on his investments about every three months.

Murphy claimed he was aware of more than $16 million that was invested into the alleged Ponzi scheme from more than 163 investors, the lawsuit said.

The investors who filed Monday’s suit also named Wells Fargo as a defendant, and claimed the bank should have known that Beasley’s bank account, which belonged to his law firm, was not being used for its intended purpose.

“Put simply, Wells Fargo knew J&J and Beasley were running a sham investment and misappropriating and/or misapplying investor funds through the Trust Account and related accounts,” the lawsuit said.

Judd told Murphy that the FBI had raided his home, and “his assets were frozen or taken based on the FBI’s allegations of a Ponzi Scheme,” according to the lawsuit Murphy filed.

“Even in this conversation, Judd represented that it was not a Ponzi scheme, the investments were solid, the business was legal, and if allowed to continue, the profit distributions would continue as well,” the lawsuit said.

On March 3, federal agents arrived at Beasley’s home on the 5400 block of Ruffian Road, near Ann Road. Beasley came to the door holding a gun, and at one point pointed the gun at his own head, prosecutors have said.

When the agents yelled for Beasley to drop the gun, he pointed the firearm at the agents “in a sweeping motion,” according to a criminal complaint. The agents then shot Beasley in the chest and shoulder, after which the attorney refused to leave his home for nearly four hours.

Beasley later “repeatedly confessed” to his involvement in the Ponzi scheme, prosecutors said.

A previous version of this story incorrectly stated how much money Mark Murphy claimed to have invested in the company.